page: 1
20
<<   2 >>
log in
join
share:
jeep3r
+1 more
posted on Jan, 23 2014 @ 05:39 AM
link
While looking through the Curiosity image archives, I came across an interesting close-up of a rock (image acquired on Sol 514) featuring peculiar streaks which I haven't noticed before on any of the previous images.

I'm not a geologist, but they reminded me of fossilized seagrass or crinoid columnals. And when considering the recent thread on potential crinoid holdfasts, I was wondering whether this could be another piece of the puzzle that might fit into the bigger picture: 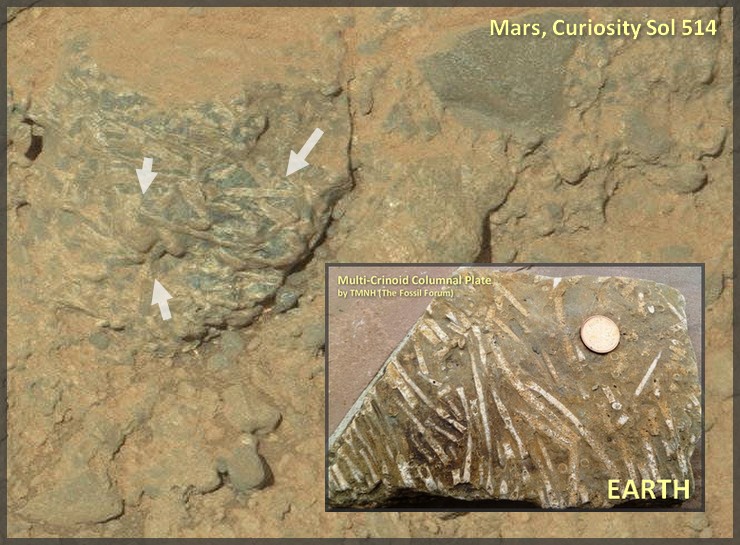 For comparison:
Fossils of the Georgian Bay Formation


I also thought about these 'streaks' possibly being mineral inclusions similar to the veins discovered by Opportunity in 2011 at Homestake, but I also see some differences, eg. some overlapping parts and possibly even a rough segmentation on one of the features. In addition to super70's recent thread on crinoid holdfasts, I thought this is probably worth an own thread for discussing a potential connection between these two finds ...


Interesting premise, and it does seem to hold the promise of being an important find. We really need a geologist on site to look at several of these findings. Thanks for the detailed OP, and on all of these type of threads we have to remember that Gale Lake was once a large and long-existing lake, so marine biology does play a part in theories about its lakebed and shoreline.
edit on 23-1-2014 by Aleister because: (no reason given)
edit on 23-1-2014 by Aleister because: (no reason given)


Indeed, marine biology should be one of the fields to first come into play when knowing that this was once a habitable environment incl. an ancient lake. IMO these streaks do look unique and are different from the usual rock inclusions we saw up to now ...

Just like yourself, I'm also looking forward to further opinions on this. Specialists in the field are more than welcome to disprove or substantiate the analogy presented in this OP!


Same feature from the MSL Chemcam 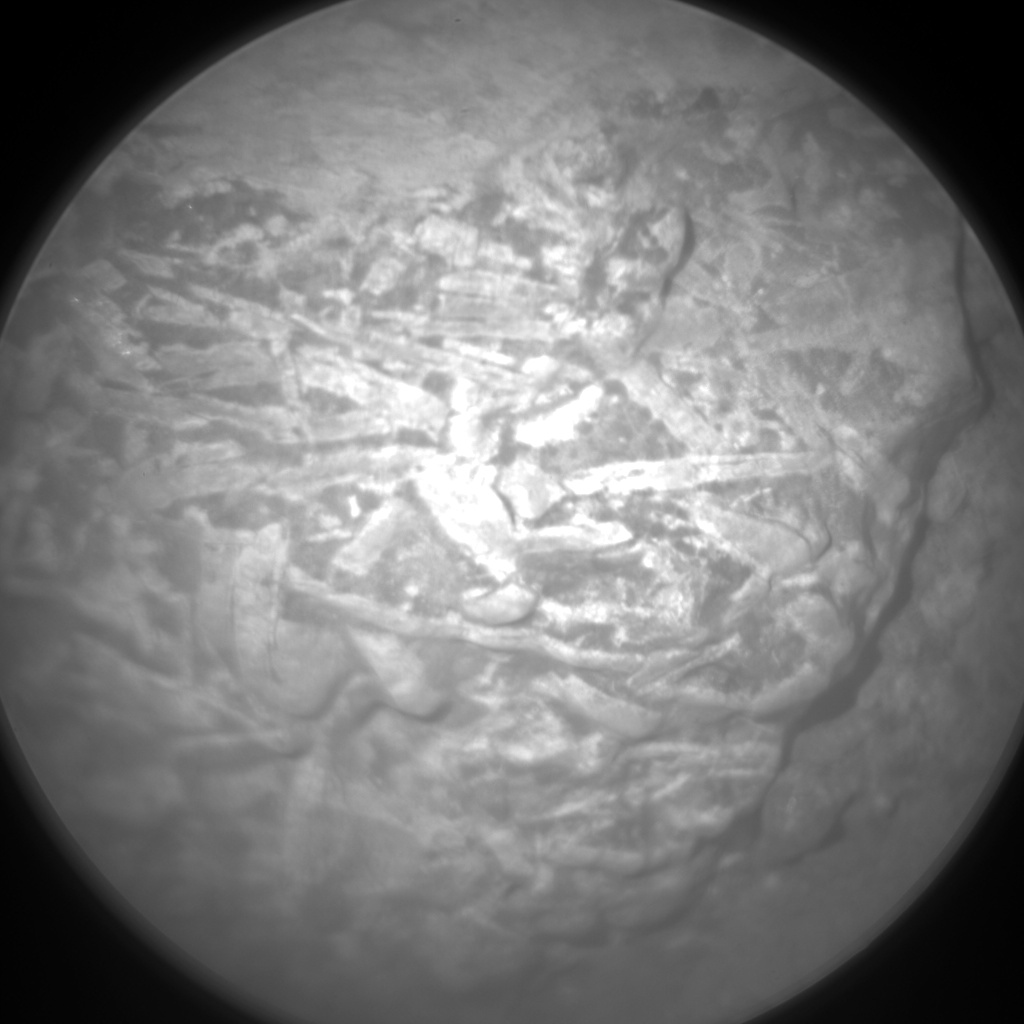 
Thanks for looking into this, Arken! The fact that NASA/JPL pointed their ChemCam on that rock means that they, too, wanted to know what these streaks consist of!

Seems like we now need to find out how to interpret the data collected by ChemCam ... and what kind of signatures we should be expecting when stumbling across fossilized organics!
edit on 23-1-2014 by jeep3r because: text

MSL Curiosity Rover "litterally" walk on a carpet of bones...


There is mounting evidence that there may have been life on Mars. The problem is that maybe this evidence came from another world that exploded, sending out organic meteors into space, that could have landed on earth. Life on earth could have started this way also.

What we think we see is not always reality, there could be many possibilities. This does look like possible fossils, but where did the fossils originate from. We will never know for sure, but there is mounting evidence that there may have been water and possibly life on Mars at one time. The same goes for the moon. Even other planets. Maybe there was a planet that blew up that formed the asteroid belt.


This is what we should be keeping an eye out for, people keep claiming every rock is a skeleton, or a fossilised monkey or an (insert earth creature structure here).

Instead, we should be looking for evidence of plant life, that would be a sure sign that there is, was, or could have been life on Mars.


This is what we should be keeping an eye out for, people keep claiming every rock is a skeleton, or a fossilised monkey or an (insert earth creature structure here).

Instead, we should be looking for evidence of plant life, that would be a sure sign that there is, was, or could have been life on Mars.


Plant life can take many forms, and have you seen the best example of a possible fossil found by user BuzzDengue and imagined by user funbox? Isn't it wonderful, and the media should be on this like a hog on another hog:

As for monkeys and lions and other creatures, nah. Unless you count my Mars lizard!:


i have way to much time on my hands

i have way to much time on my hands

Well, I'm quite sure you're pretty quick with those gif animations, considering the frequency with which you post them ... your visual support is much appreciated, keep it up!


Thanks, super70, and back atcha ... your thread on crinoids was indeed useful and, in this case, helped homing in on what this might actually be. Let's keep our fingers crossed & hope for the best!


Just an update: there are in fact two ChemCam images of this organic looking feature, taken on sol 514. In order to compile all available images in this thread, here go the pics incl. links to the original images: 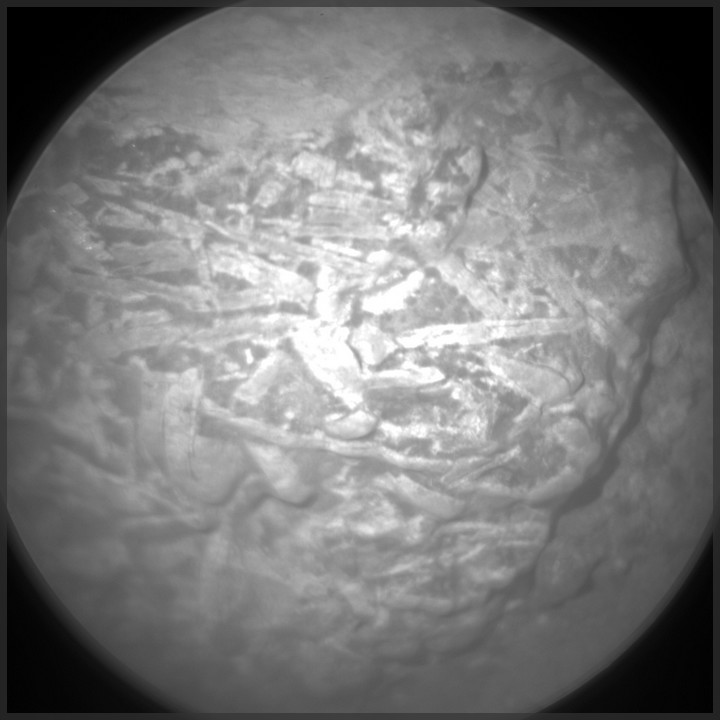 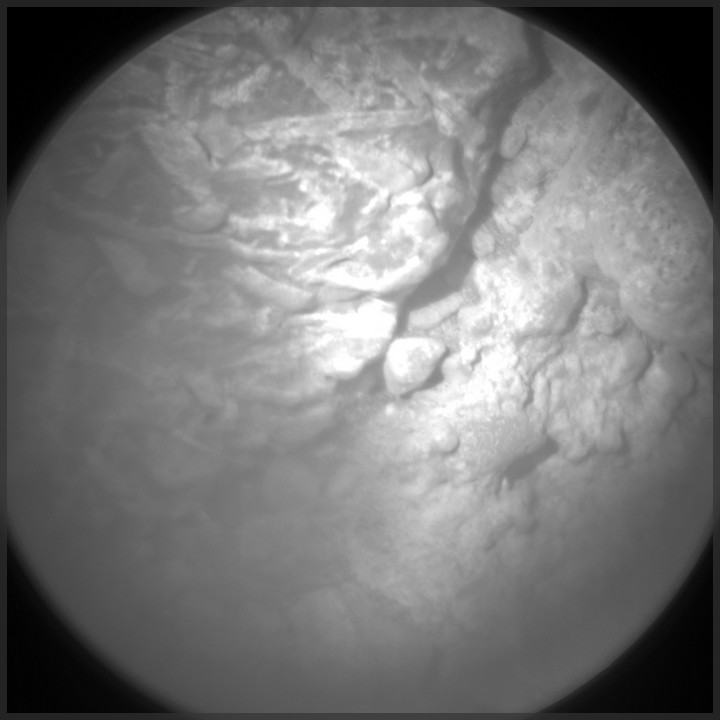 P.S.: Still looks very intriguing to me ... possibly fossilized plant life/crinoid columnals/seagrass? Would be my best guess, doesn't look like mineral veins to me, but time will tell!
edit on 24-1-2014 by jeep3r because: text


While keeping an eye on this, I came across a blog entry on a site called Meridiani Journal referring to this feature as "The Ribbon Rock", here goes the very brief text/description they provided:

While a lot of attention has been paid the last few days to the odd rock which “appeared” beside the Opportunity rover, the other rover, Curiosity, has found its own interesting little chunk of a Martian puzzle.

While not as publicized, it has been the subject of a lot of discussion among mission followers. What are the ribbon-like bands? Could they be feldspar laths? Another type of lath? Something else entirely? Curiosity has taken Mastcam and ChemCam images, but no other information is available yet.

Nothing official yet, but interesting nonetheless ...
Article Link
edit on 24-1-2014 by jeep3r because: text

jeep3r
I'm not a geologist, but they reminded me of fossilized seagrass or crinoid columnals. And when considering the recent thread on potential crinoid holdfasts, I was wondering whether this could be another piece of the puzzle that might fit into the bigger picture:

That's the most interesting find I have seen until now.


Thanks for your comment, ArMaP. Those independent 'segments' did look distinctive enough to pique my interest right away. I see some overlapping & bending in those 'streaks' as well as some kind of segmentation here and there. Makes me think that, whatever got enclosed in that rock, was probably a rather 'thin' material, judging from the looks of it.

It's a pity that this apparently hasn't been imaged by MAHLI! But I could imagine a number of reasons for that being the case ...
edit on 24-1-2014 by jeep3r because: text


Here goes a contrast-enhanced version of the same feature(s) imaged by ChemCam: 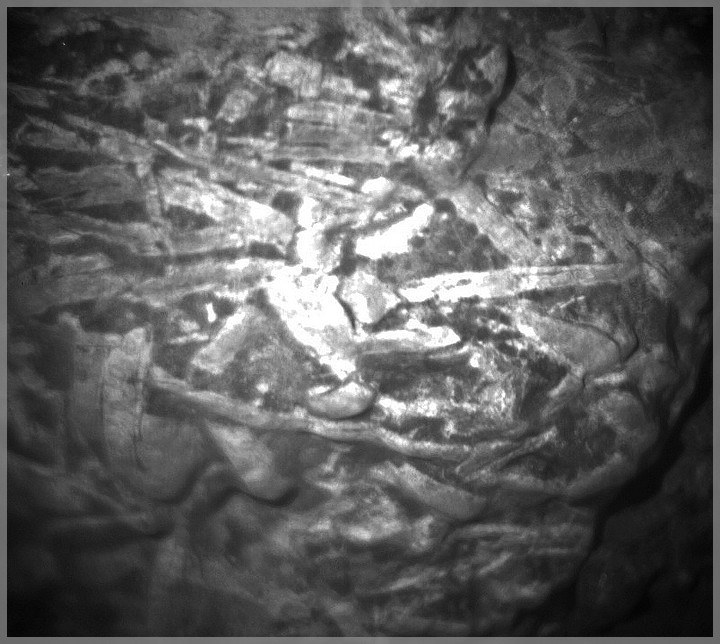 ETA: And again, what are those ribbons? Feldspar lath? Traces of deformation by impact pressure? Splinters of wood? Some other plants? Streaks of ancient toothpaste? You be the judge!