While serving in Afghanistan, Petty Officer Chris Holden has attended numerous memorials to honour the dead. This is what they look like to an atheist

People tend to reject the primitive religions, but sun worship seems to me an entirely rational theology. This occurred to me, ironically, as I struggled into full body armour, beneath a sun as merciless as the Old Testament God, in the Main Operating Base (MOB) Lashkar Gah, Afghanistan. 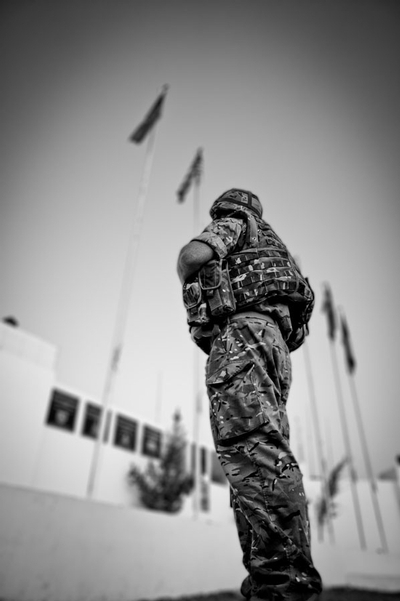 As I shouldered my rifle, an amplified wail erupted beyond the sandbags and wire and over the MOB’s monolithic walls. In Helmand Province, the Islamic call-to-prayer resolutely punctuates the pattern of life, and while it fails to emancipate Afghans from the “tyranny of cousins”, liberal alternatives are crushed with great success.
But the Adhan was competing today with an infidel chant. ISAF Christians had congregated in a canvas chapel and their hymn was melodic to be sure. Yet in this harsh environment, the Islamic lament retains an atavistic authenticity. One imagines the nomads of antiquity, hunkered around flickering camp fires, swathed against the desert dust, mesmerised by the verses of the great mystic poets, or perhaps just ranting in the Abrahamic tradition.

I reached the canvas chapel and glanced inside. The Anglican flock were dressed like me in crumpled deserts and scuffed boots. They had worked, slept and eaten beside me constantly for months. Nevertheless, as they projected their voices in unified praise, I knew I had no business with them here, so I turned away and trudged on through the dust alone.

continue to source article at rationalist.org.uk


This is a really good story of what I am sure many of us have experienced in some shape or form. When I say us I mean Atheists/no preference as my dog tags read. I always respected the ceremonies in the military and the religious beliefs of fellow soldiers usually such things were separate when we paid our respects. When they were not I didn't have any complaints. This thread isn't a complaint in any way either. It is just a bit of information so people know that there are atheists in foxholes contrary to the saying. If anyone ever wondered if that saying held any merit I thought this story an account of one atheists perspective was pretty good and worth retelling. It brought back some memories for me which I haven't thought about in a long time. The ceremony is a bit different, but so much else is very familiar.

posted on Jan, 23 2014 @ 04:13 AM
link
Very thought provoking. It also serves to remind any potential RN recruits that even as a member of the seafaring service you may well end up in the middle of it on terra firma. This guy could be medical, aircrew, or technical so spare a thought for poor old jolly Jack/Jill as he/she could be in peril at sea, on the land, or in the air. Its not just the army and marines who wear MTP today.
edit on 23-1-2014 by hotel1 because: (no reason given)


The thing is, whether one has a belief or not, the ability to mark the passing of a friend, or a colleague, or a member of any community, no matter how that community came to be, what it revolves around from an ideological standpoint, that marking of passing is psychologically necessary.

And again, no matter what ones beliefs, the unique circumstances of a funeral rite held in a theatre of war is no exception. The difference is, that in that unique circumstance, there is not the benefit of an abundance of time to process the psychological backwash from the passing of a fellow human being. Civilian mourning can be a process involving many trips to the pub, and some have the dubious luxury of mourning the lost, until they themselves become ashes and dust. Those deployed to combat zones however, have limited time to process the emotions which they are experiencing, because all too soon, they will have to hoist rifles to their shoulders, and go about the business of war. Distraction from objectives is dangerous to them, and to their respective missions.

Because of the unique pressures exerted on the modern warrior, loss has to be dealt with in the same way as everything else, with a uniformity, to a pattern made familiar by repetition, so that it melds safely into the background of life at war, rather than consuming the mourners to the point where they become less effective in the field. It may seem exclusive to some, because of the choice of words, and the faith from which they came, but like everything else in the military toolkit, the rites are designed in order to allow those who remain to continue to function, despite loss.

Apart from anything else, the ritual is important, not which religion it steals thematic guidance from. As evidenced by his own words, the soldier who wrote this article (which I thought was a wonderfully written piece by the way) was affected by the ritual, despite his lack of identity with the Christian passages. Though the words had no spiritual meaning for him, he still felt the psychological effect of the moment that was created between the words that were spoken, and the men who heard them. The rites bring those who remain together, as well as serving their primary function of rememberence, and the paying of respect to the dead. They unite in sorrow, those who witness them, not under the banner of any God, but under the banner of grief.


What a beautifully written article, thanks so much for posting it. The writer captures perfectly what it is like to be the one not mouthing the words of the Lord's Prayer and of feeling alienated and different and somehow wrong. He spoke about being the one at school who thought it must be known innately and that really resonated with me.

posted on Jan, 23 2014 @ 09:05 AM
link
This is about respecting the beliefs of others. I'm an atheist, I was married in a church, my wife sings in the church choir. We don't fight about religion because we respect each other. This is as it should be.


Wow. That's a statement I heard all the time from my step-father who served in WWII. He always said this about believing in GOD.

He'd say "There are no Atheists in foxholes!" (Meaning, as the bullets and bombs are flying all around, everyones' seeming to yell and pray "Dear GOD... Help me!")

not, you are at war and you could die any day now.

but i guess its up for interpretation.

religious people tend to interpret things the way they want to.

posted on Jan, 24 2014 @ 12:08 AM
link
Thank you for all the kind replies. That soldiers story is certainly moving and can be interpreted to hold many messages every person could take away something different from it, and that is how it should be.