posted on Jan, 22 2014 @ 03:30 PM
link
So what is the significance of the rabbit? Was it the artists signature or does it have another meaning??


Johannesburg (AFP) - The South African government has ordered the removal of a rabbit that was secretly sculpted into a recently unveiled statue of Nelson Mandela, an official said Wednesday.

The artists who built the nine metre (30-foot), bronze colossus in Pretoria, added a rabbit into the ear of the statue, without clearance from government.

"We want to restore the integrity of the sculpture as soon as possible," Mogomotsi Mogodiri, spokesman for the ministry of arts and culture told AFP. 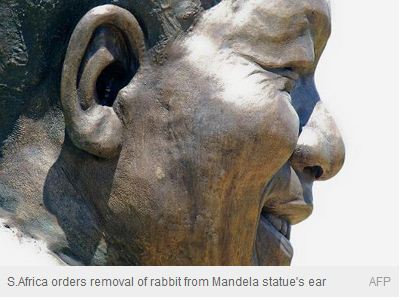 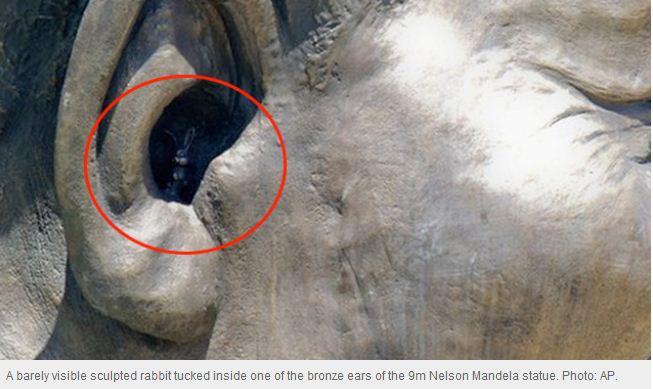 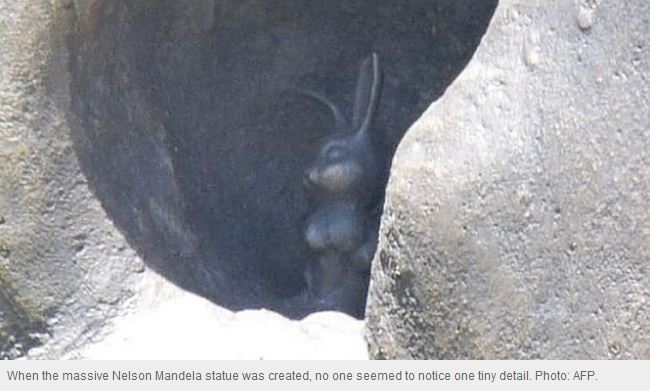 It is interesting though, and I am curious as to why it's there, and why they are so serious about having it removed.


According to this site

"In West Africa, many tribal cultures, such as the Yoruba of Nigeria and the Wolof of Senegal, have traditional story cycles about an irrepressible hare trickster who is equal parts rascal, clown, and culture hero. In one pan–African story, the Moon sends Hare, her divine messenger, down to earth to give mankind the gift of immortality. "Tell them," she says, "that just as the Moon dies and rises again, so shall you." But Hare, in the role of trickster buffoon, manages to get the message wrong, bestowing mortality instead and bringing death to the human world. The Moon is so angry, she beats Hare with a stick, splitting his nose (as it remains today). It is Hare’s role to lead the dead to the Afterlife in penance for what he’s done."


Kind of interesting it wasn't noticed earlier.
edit on 1/22/2014 by shockedonlooker because: added info

posted on Jan, 22 2014 @ 03:49 PM
link
Down to the rabbit hole.. i wonder if the sculptors made a statement by this or not. According to video they were refused to put their signature on trousers so they hid rabbit ( signature ? ) in statues ear.
I don´t actually get it why this statue has to be so tall.. its totally competing with statues of North Korea.. nor why people go to pilgrim to see it.. im not saying Mandela was important figure against to afwul apartheid, just that ( lutheran ) me see this somekind of worshipping.

Prinsloo and van Vuuren then told the Afrikaans-language Beeld newspaper that they'd inserted a tiny rabbit in the ear as a "small trademark" after authorities refused to let them engrave their names on the statue's trousers. They said they chose the rabbit because of the haste with which they had to complete the statue. The word for rabbit in Afrikaans is haas, which also translates to "haste."

Rabbit/Hare myths were long known to Native Americans in North America and parts of Canada. Primarily the Algonquin tribe with the Great Hare story. Apparently most of the rabbit stories come from Cherokee folklore. No doubt Cherokee Indians and African slaves came into contact. In many cases intermarried. One can see how the Rabbit folklore stories would morph into Br'er rabbit.

What The Slaves Did with Br'er Rabbit

While Br'er Rabbit played the trickster in African American Folklore he also meant other things. In a sense he represented slaves who used wit to overcome obstacles and adversaries (white slave owners). Not always successful but he was a folk hero
Article Source: EzineArticles.com...

Or this from Wikipedia..

The Br'er Rabbit stories can be traced back to trickster figures in Africa, particularly the hare that figures prominently in the storytelling traditions in West, Central, and Southern Africa. These tales continue to be part of the traditional folklore of numerous peoples throughout those regions. In the Akan traditions of West Africa, the trickster is usually the spider (see Anansi), though the plots of tales of the spider are often identical with those of stories of Br'er Rabbit.

Perhaps Mandeba had more of a sense of humour than we thought with that cheeky smile?

Just remembered, as you get older you tend to get a little more hare in your ears and it becomes noticeable!
edit on 22-1-2014 by Shuftystick because: Memory thought...

Imagine that because in North America the "trickster figure" is commonly referred to as President Obama.


Chop him out I say.

It's just Beezzer trying to get more attention. That Wascaly Wabbit.

That'll show him that we are onto his sneaky ways.

But to be truthful, I do wonder what the true story is behind it.

posted on Jan, 22 2014 @ 05:53 PM
link
The rabbit in the thorn tree is a quintessential South African urban legend from the 1980s, the last paranoid decade of apartheid when the ANC was banned.

It began in 1987, when Barclays Bank changed its name and logo to First National Bank, probably to try and obscure the fact that they were doing business with apartheid, like many companies during "disinvestment".

Their new logo was the thorn tree, and soon a rumor spread that one could see a rabbit in the branches.
The rabbit was said to be a symbol of the ANC, and white South Africans soon assumed that FNB was the "ANC bank".
The bank eventually paid for huge newspaper adverts refuting the rumors.

Why the rabbit became a associated with the ANC remains a mystery, although one explanation is that the lower echelons of the police force would say they are "hunting rabbits" or "hares" when they went to look for ANC operatives.

The rumor also caused some humor, such as the joke: "Why is the symbol of First National Bank a thorn tree?"
"Because there's a little pr*ck in every branch".

People can make their own deductions what the sculptors may have meant, if they were aware of the old urban legend.
www.bdlive.co.za...;jsessionid=BD2BCD4733D9CEDAA00EE91C2ECCAE9E.present2.bdfm
edit on 22-1-2014 by halfoldman because: (no reason given)


I agree. When I saw this on the news earlier.... I said they should let the rabbit stay. JMO though and it doesn't really count there I suppose.

Since we're speculating, I'm going to refer to this site The Mandela Effect that posts reports of peoples' memories of his earlier death, some recalling the year 1989.

Because this refers to a statue of Mandela, I found this quote from the site interesting (there are apparently not that many statues of him?)

This copy is now apparently gone from wiki.
Interesting find on the rabbit.

The Queen is the symbolic head of the knights of malta, but also in order to be a knight you have to have a fully stacked bloodline in 8 trees, all your great grandparents.

Scroll down and you can see the pictures of Nelson Mandela.

Puts a lot of stuff into question. Trickster? Who is a hero? Do all roads lead to rome?

I like a good conspiracy as much as anyone here (ah ha ah ha ha), but maybe it's just a bunny...?

posted on Jan, 24 2014 @ 01:47 AM
link
According to a local newspaper the department that commisioned the statue would not allow the artists to add their signature to the sculpture.
They decided to use the bunny as "signature" of sorts to signify the haste in which the piece had to be completed.


Chinese moon goddess and her rabbit.
Look at the names of the Chinese Chang'e-3 mooncraft and it's Jade rabbit
Change’e-3 landed in the Sinus Iridum, also known as the BAY of RAINBOWS
It landed apparently at 9:11
Moon goddesses are flood goddesses
The ear is a moon.
nelSON MANdela

The space program is not science, it's the age old darkness branded in a scientific package for the crowds today.