I am a professional graphic artist and notice tiny details in images that have been altered that most people may not notice. There is obvious photo manipulation going on here. Some rocks (numbered in second image) appear in one photo, then magically spread out with more rocks appearing in the next photo.

As you can clearly see, a mosaic was made combining different parts of two images to create a composite of certain areas. We know Nasa creates their panoramic images using several images, but why would someone go into such detail to add or remove certain rocks, adding cracks in dry creek beds, moving things around? Click on the "View Full Image" links to pop out the images for a better view. 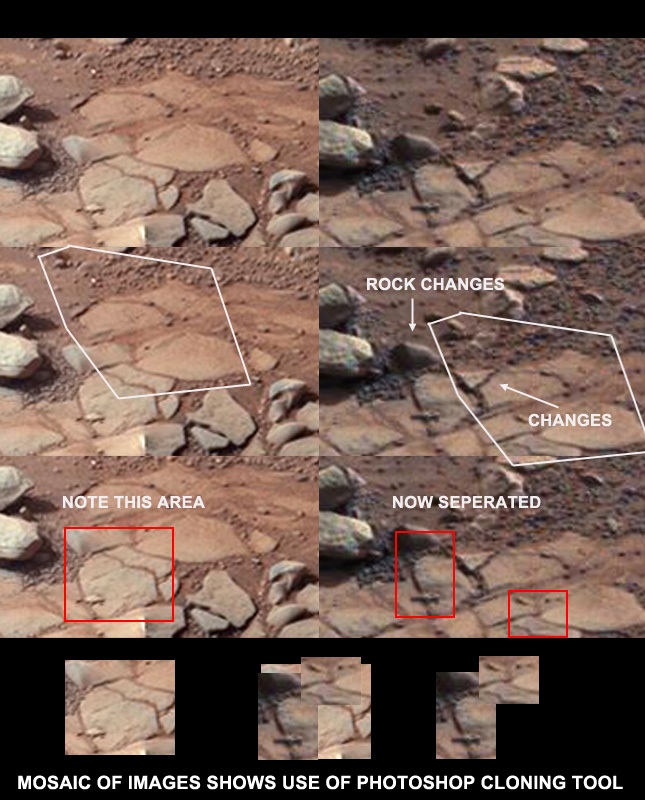 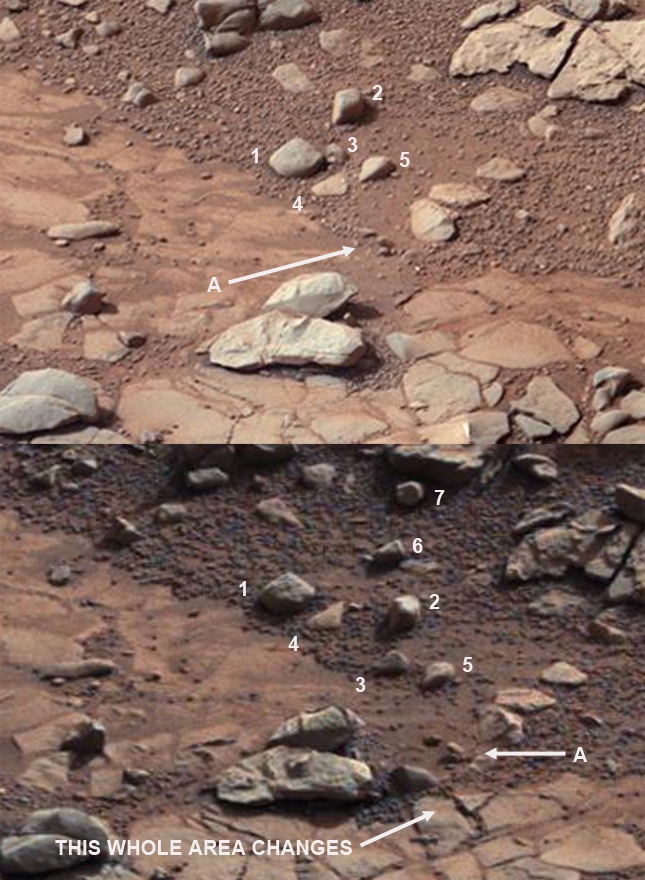 If your going to investigate this subject, you should use original images from NASA.

There is no way in hell some of those changes happened.

I could see wind moving a rock, but not to completely change things as has been done.

Even the light source is different. Not that that cant be attributed to different photos.


These ARE Nasa's original images. I merely have labeled the areas that show manipulation.


Very good,number 3 has definatly moved,have you discounted the wheels moving the stones?
It seems the rocks are alive!
Oh at 1 oclock in your last image there appears to be a pair on tentacles , s and f


In image one, where is the exact location? On the unedited one.

I see they are from jpl, but i do not see the location.


These pictures were taken from different angles, which is why it appears to look this way. I am also a professional

You need to give points of reference for the original.

It looks like tons of edits. I dont buy this at all.


So what do you think about the dotted crack in image one?

I do see the perspective change now.

things being covered and uncovered. Would explain the moving rocks too.

Could all of these be explained by the Rover rolling across the site (although I don't see any tracks in the after pictures)
edit on 22-1-2014 by Aleister because: (no reason given)


Go back to the OP, both images from JPL are linked for review.


Yeah ,thanks for adding the second link.


It actually look like the stitch is going right through those rock, so that the part on the right has been moved down.


It actually look like the stitch is going right through those rock, so that the part on the right has been moved down.


I don't know what you mean. The pic I uploaded catches a portion of the picture to the left of it, is that what you see?

Well, no, wait, the cracked rock I found seems to be an entirely different rock. Look at the formations in front of the two pictures, they seem totally different. OP, are you sure these are of the same area? I'll go eyeball it some more.

No, on the second set of pics it's the same area, but the entire section in front of the cracked rock I found has been overrun by dust or something, covering the flat rocks in front of it.


Yes i mention that these images were taken from a slightly different angle. This does not explain the obvious "mosaic" of different areas, as shown at the bottom of image one.
Take a close look at the red boxes and how someone spent some time morphing these areas to look authentic.

posted on Jan, 22 2014 @ 03:50 PM
link
The mosaic is because that is how the images are captured. One small image at a time.
They transmit the small images back to NASA where they stitch them together.

Those giant images are comprised of dozens of smaller images.