posted on Jan, 22 2014 @ 03:35 AM
link
I try to put as much information and thought into my threads as possible, but I really don't know what to say about this. It is from a cache of released documents about the SH shooter. I'd like some details, because this to me implies a lifelong outside influence of radicalism. I mean, having as many guns as are seen in the photo is nothing i'd consider shocking, but dressing the kid up in camo and posing the kid with them and giving him a handgun to chew on is a bit weird to me. 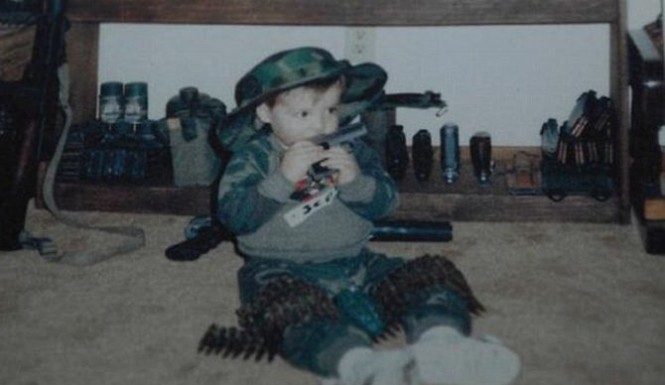 Among the many documents and photos Connecticut police recently released in connection with the December 2012 school shooting in Newtown is a photo of the shooter, Adam Lanza, then 20. In it he is just a toddler, and sits surrounded by guns and ammunition, wearing a camouflage hat. He is teething on a pistol. It’s been over a year since the rampage that that claimed the lives of 20 school children, six staff, as well as Adam’s mother and himself; police have yet to determine a motive.

Also:
I can't imagine that this hasn't been posted here, but I haven't seen it and didn't see it in a quick google search (i've given up on keeping track of and trusting ATS search).


Well it is confirmed by LE, and mainstream media. So if you trust those sources it is him.

Also, here is the official (40 page) report on the shooting.
Report pdf from CT.gov
edit on 22-1-2014 by GogoVicMorrow because: (no reason given)

I'm guessing that we'll be seeing stuff like this forever.

I mean, who can forget robbie parker?

And that affable guy who brought out stuffed animals for the children who came to him once the mystery gender bus driver left them at his door?

Of course we'll be seeing phamily photos, and by the score!

That's why we're not allowed to discuss it.

Britguy
+2 more
posted on Jan, 22 2014 @ 04:04 AM
link
I played Cowboys and Indians as a youngster, but have never felt the need to go out and kill native Americans in adult life.

I think being sat surrounded by guns and ammo for a toddler shot will have had nothing to do with going on a shooting spree in later life either, it's nothing more than a probable anti-gun propaganda piece. In other words, being photographed and being able to chew on a gun as a toddler obviously scarred him for life and led to this shooting rampage!

GalaxyEyes
+5 more
posted on Jan, 22 2014 @ 04:11 AM
link
That's a bad photoshop job. Look at the shadow of the toddler on the left how it just magically ignores the physical laws of 3D space.

GalaxyEyes
That's a bad photoshop job. Look at the shadow of the toddler on the left how it just magically ignores the physical laws of 3D space.

I have to disagree, I don't think it's a photoshop. That shadow is a camera flash shadow rather than a shadow cast by the rooms lighting.

The point I was making was that this photo doesn't really mean anything in the context of what he did later in life.

I do agree that giving a toddler a real gun to play with is definitely irresponsible, there is no argument there, but what is the context you are trying to determine here? The toddler being given a real gun to handle and chew, or that this is somehow connected to what he did when older?


We should be very suspicious of this photo. Especially when conclusions of radicalization are drawn from it.


But it kinda does. If this was taken at home it was taken during a time that both Peter Lanza and Nancy were still together. It also indicates an interest in guns that goes a bit beyond the norm. That doesn't mean they are radical or wrong necessarily, but it shows that this wasn't just a small hobby for the mother or the shooter later in life.

If this picture doesn't scream "who were/are these people?" to you, i don't know how to articulate it further.


I believe Nancy was briefly described as a prepper, but they (msm) didn't run with it as I expected.

What I would like to see is a full report on Nancy. From friends and others that knew her for years. Was she really a known SHTF readiness person and if so to what extent. What were the impressions from those that knew her and her husband.


So what? I have pics that my dad and uncles that took of me like that from the 80's.
I haven't shot anyone yet. By your post, are you saying that I am suspect because of one of my childhood pics?
Your idea to impose something wrong with that tells me how much of a drone you are..

Are you saying that boys in high heels or in makeup are driven to become homosexuals?


Added: Can you show us some of your childhood pics and let us deem what you may do or try.
You crave the wrong attention by posting that IMO
edit on 22-1-2014 by AK907ICECOLD because: (no reason given)

I didn't see anything in that home that would suggest that the notion is true. We even saw pictures of the basement, with no evidence of that. No water, no food, nothing.

Maybe they have a bug out location, but I'm guessing it was just a rumor. Gun enthusiasts? Oh yeah. Preppers? Maybe not.

Logarock
reply to post by GogoVicMorrow
We should be very suspicious of this photo. Especially when conclusions of radicalization are drawn from it.

YES - very suspicious indeed as is the case with everything else released by the authorities about SH.

The image looks to have been conjured up from 'somewhere else' as a propaganda piece.

Most articles refer to the child as an "unknown boy" gnawing on a gun, and do not specifically ID him as Adam Lanza.

Perhaps the kid is sucking on his water pistol.

Since there's no surrounding context to the picture its really not possible to tell what is going on, which makes it a perfect specimen for exploitation.

The right side photo is a better, less cropped version. FROM HERE

Across his chest is a military style name tag and its NOT ADAM - it might read Joe - not sure yet.

From the article with the un-cropped photo - FROM HERE -

Evidence released on Newtown shooter includes chilling images, Lanza as a toddler chewing on a gun
December 29, 2013
By Anomaly

Evidence collected by investigators on the Newtown, Connecticut, elementary school massacre, revealed shocking pictures and images displaying a troubled boy, growing up in the midst of America’s gun culture.

Adam Lanza tried his hand at writing in school, with a featured image of a trigger-happy grandma blasting with a “rifle cane” and kids playing a game of “hide and go die.”

In ‘The Big Book of Granny” Lanza wrote, “I like hurting people . . . especially children.”

In one section titled, “The Adventures of Granny,” the main character and friend, ‘Dora the Beserker,’ visit a day care center.

Granny’s arsenal included: A handgun, an AK-47, an M-16, a rocket launcher, a musket and a shotgun.

One image sticks out more than the rest, showing Adam Lanza as a toddler at home, on the floor chewing on a gun.

posted on Jan, 22 2014 @ 09:39 AM
link
Looks like he was born to be used as a tool and in a black op family. I would never be following orders, just break those illegal contracts and head for a small town somewhere! Serve and Protect your family and loved ones.

Many of us don't believe one bit of the official stories and true justice for any victims is bringing the real culprits, which would be the government and cia/para military and possible foreign partners, to justice.
edit on 22-1-2014 by Unity_99 because: (no reason given)


My God, you miss the point to an embarrassing degree. Probably should read my other posts before labeling me, but I guess that has what society has ingrained in you.

We don't see kids pictures like this and think that kid is going to grow up to be violent, or boys dressed up in high heels and think they are going to be homosexual/bi/transgender. Of course not, duh, don't be ignorant. HOWEVER we can gleam some information about the parents. Where is this taken? The Lanza's didn't have this many guns according to the report. Who gives a baby a gun? Even if you empty it and check, it's still just poor practice.

I know you still may not be getting this, but we don't prejudge, but in RETROSPECT of the mass casualty incident, I think it's fair to examine this staged picture of the spree killer as a baby dressed in camo, surrounded by weapons, holding a handgun, and wonder what the atmosphere he grew up in was. What the ideologies were.

Im not even saying they should be admonished, lots of kids grow up fine with prepper parents or militia parents, however this kid didn't and we were never told he grew up in those kinds of settings, so why are we seeing images that sort of appear that way? Is it a secret? If so why?