posted on Jan, 20 2014 @ 11:56 AM
link
So there are new Threat on the olympics and its against touristes.
From Chechen leader Doku Umarov.

There is a video in the link from abs news.

Citing a new "surprise package" for Russia and Olympic spectators, Islamist militants in the North Caucasus Sunday launched a new threat to the Sochi Olympics with a purported "martyrdom" video by two suicide bombers who attacked a transit hub 400 miles away.


U.S. officials said they are studying the video. The video comes one day before the Olympic torch relay is scheduled to go through Volgograd Monday.


After the first 2 bombing Russia destroyed a militants strong hole in Dagestan.
So i"m suspecting a retaliation against Russia for sure now.


You know, I get that the Chechen rebels have a big beef with 'ol Vlad...but do they want a war or do they want liquidation?

Putin would probably shoot the first aid to even utter the word mercy or restraint. I can't believe those people would be that insanely stupid.

Although, I can believe they'd toss threats all day long. Why not? Al Qaeda costs us millions every time they phone in a crank call with a vague threat of something to happen somewhere. They probably figure it's worth a shot to see if Russia is as gullible.


A new kind of war, an eradication.


If my kids were an Olympic athlete, I would be very concerned about their safety. If I was a spectator I would be concerned considering how crazy these people are. Having revenge for innocent lives being killed and than killing innocent people is like justifying two wrongs make a right. It's just going to create a vicious circle of hate and innocent killings. Does anybody have a sane mind today?

Why can't we all mind our own business and live in peace. Is it really that difficult of thing to do?


The Russians have 50,000 troops and security protecting the Olympics. They used 100,000 to attack Afghanistan. Now take a look at the size difference. Nothing will happen at the games themselves. The edge of security I would be worried about and the rest of Russia. Do you think Putin would allow an attack on the games? This isn't a democracy we are talking about. Security has been in place for a month. Maybe attacks on Moscow or Stalingrad or any other number of cities. It may happen but it will not happen at the games. They have searched everything within a 50 mile radius already. Nothing will happen In Sochii. Or even the surrounding game sites. As a comparison London had 5,000 troops. They both have numerous surface to air missiles ready.


Then I just read this... Just now off digg.com


I wish that people did not want to rip each other to shreds over hatred.


Self Eradication...perhaps. After all, it's 100% within the power of the Chechen rebels to kill themselves here or not. If they strike Sochi...they've insured they will die to the last man and woman among them, IMO. Putin won't spare anyone this time..and it will be another run at the same people and fight for Russia. They just aren't likely to stop short of total (I.E...no one left to shoot) victory if they're pushed like this.

Personally, I hope this doesn't happen, even for that rather positive outcome as I'd see it. The problem is...Russia is about as surgical and precise in warfare as a sledgehammer used to pop a blister. (Oh..the job gets done..I just hope the part of the body with the blister wasn't important either).


Your true believer in warped jihad would love for nothing more than martyrdom Wrabbit.
They want to die for thier cause-In their eyes,its better to do that than to survive to see the changes they strive for...
Like I said,warped.

I don't like the sound of the surprise package being as payback for "all the muslim blood spilt"
To me that sounds like more than a regular bombing,but lets hope I am wrong.
Who knows what those nuts have access to-money can buy a lot of nasty things in that part of the world sadly.

You are pretty much spot on. Putin would wipe Chechnya off the map. Nothing short of killing every single male (and whoever else gets in the way) would be enough for him.

posted on Jan, 20 2014 @ 12:39 PM
link
What I would like to know is who exactly is funding these guy's and or pushing their agenda. Who do they work for. I would not be surprised if it is a 3 letter acronym.
Firepiston

You are pretty much spot on. Putin would wipe Chechnya off the map. Nothing short of killing every single male (and whoever else gets in the way) would be enough for him.

And then the fanatics in other lands would use that as an excuse to perpetuate the jihad...Its neverending for people with such convictions,even though they seem insane to the rest of us.
Gawd help us in the west for feeding them into a frenzy over the decades...
Blowback sucks.

You are also spot on. It is a constant cycle. At least the Hatfields and the McCoys stopped killing each other in less than a century. Kinda tells one just how ass backwards the extremist Muslims are as they have been going at it for a couple of thousand.

Personally I think the world would be a better place without them.

There was talk of the Saudis threatening to disrupt the games a while ago-not sure how much truth there is to that though.
It was mentioned before the Volgograd train station attack. 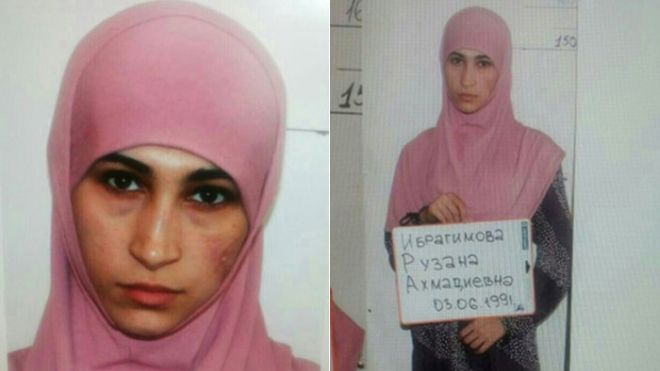 
U.S. counterterrorism operatives are helping Russian security agents in the hunt for a "white widow" -- the wife of a dead terrorist -- who could already be inside the massive security zone set up for next month's winter Olympics.

Ruzanna Ibragimova, the 22-year-old widow of a jihadist killed during the Moscow theater attack, is believed to have traveled from Dagestan to Sochi, according to a Russian security bulletin obtained by FoxNews.com, along with photos of her. The bulletin and photos were distributed by the Russian security force FSB and Sochi security officials to U.S. and other security agencies late last week.

Of course it is..I mean it's not possible for their to be bad people in the world unless they are somehow controlled by the CIA or NSA or FBI or some other agency.

Is the sky always blue in your world also or do you just refuse to believe their are bad/evil/violent people in all race/religious/classes of life. Mankind has been killing each other since the dawn of time, long before any US agency existed . I have never understood why some people refuse to accept that.

posted on Jan, 20 2014 @ 01:12 PM
link
Call me a paranoid conspiracy theorist, but, wouldn't this most likely just be the U.S. behind all of this just to ruin Russia's day in the sun? amirite?


She should be easy to ID on any facial recognition system-note the scar tissue on one side of her face under the eye/cheek area.
Thats if she isn't covering her face-But I imagine security people will be checking under face coverings.

If she is who they claim her to be,she ain't short of motivation for her cause,if her husband was indeed killed in the Moscow theatre attack.
(Even if the scumbag deserved it)

That's simple to work out, this type of muslim only accepts American dollars. This is payback for owning, both Obama and Kerry over Syria.

posted on Jan, 20 2014 @ 01:24 PM
link
Said it before, Putin will do what the hand wringers of the West have consistently failed to do, obliterate the problem.

Anything short of eradication won't work it is seen by the extremeists a a weakness. The only ultimate power they will unfortunately discover is not Allah, not God by any other name save for the God of Fire, and that will be nukes, small but surgical in theatre of operations for there won't be one small bomb, missile or whatever.

It is clear that any attack on the games or anything associated with them will be met by some serious ordnance.

The Bear will not be a pleasant beast if roused, particularly from its winter slumber...

It won't be nice to see, will attract worldwide criticism, but will make extremeists think about different targets as a result, and that's a whole host of problems to come.

posted on Jan, 20 2014 @ 01:24 PM
link
The most interesting (and frightening) aspect of this story about the White Widow is not just that she was already inside the security zone. It is who or what else is already inside also.

Russia land of massive corruption, lot's of missing weapons of various and nefarious natures. Bombs, Chemicals and Biological are all a scary possibility.

Just wtf are people thinking going to both Russia and nuclear Japan this go around?
edit on 20-1-2014 by Mamatus because: Gwammer and speeeeling