Yes, they do keep coming with better pack designs but I have yet to find any made in neutral colors.
Always orange, blue or some other color that can be seen from miles away.
I would add that any good pack should have a padded waist belt to keep it nice and snug on your body.

What did you find the least expedient or least needed among your gear while you were serving?


I could start with the (IMTV) what they laughingly refer to as body armor. You know their only rated to stop a 9mm. no side plates. I've read their making the neck holes larger now, use to be that damn things would try to choke is you raised your hands over your head---least ways they would for some of thicker necked ground pounders. That it didn't allow for much adjustment.

I never did like design of the Mag pouches. It makes for an awkward grab. Your hand should fall naturally to the mags for a quick reload. Worse if your the guy with the SAW

The Individual First Aid Kit (IFAK) was worthless. Just a fancy name for a pouch. the Navy Doc's carry something closer to my civilian AMK

again no need to dump it all out just flip it open and take what you need.


I know that this makes me sound a bit stupid, but I've never deployed with the gear the Army gave me (Except my Wooby). Everything I deployed with was similar, but a better aftermarket product. I've done that since the eighties. And it made turning in the gear back into CIF (Central Issue Facility) a snap when being transfered. I don't know how Uncle Sams Misguided Children did it, but CIF was always a hassle when clearing.

I agree about the body armor issue as well. Mine was stripped to the minimum standard. No neck piece, side armor, groin and shoulder protectors...all gone. All that crap slowed a guy down when speed is of the essence. But or SAPI was rated to stop 7.62x39. Still heavy though with everything else attached. I believe that is one of the main reasons my back went south. All that humping and riding in vehicles that basically had sold steel bars for shocks. (As in non-existant)

I don't quite understand what you mean by compartmentalized - do you mean that each pack is too compartmentalized or that your entire system is and therefore doesn't integrate well? If its the system, I'd suggest taking a look at what HPG (Hill People Gear) are doing - each piece can be used on it's own and/or integrated into a larger wholistic system; kit bags, day packs, multiday pack, extra pouches, compression sacks and harness/belts swapped out to fit your needs/size (and for the military in you, also made to that standard)

Pictures of your packs would be nice also

ETA: Disclaimer, I don't personally use their gear since I prefer lighter weight packs, but I like the concept and design of pieces that are useful individually and as a whole...


Semper,
I went to a big out door store...Cabelas and bought a pack that worked for me.
It is the Alaskan Outfitter, with a detachable top pack, separate metal frame, and it has top and bottom access to the main pack, along with a few outer pockets and the frame extends up high enough to tie up a sleeping bag on it plus a built in rain tarp in top pouch... great balance of pack, it does not feel as heavy as it is, and is easier on the back then your military pack...it is 5300 cu in. so there is A LOT of room in it.
I also have packs like the ones you have shown(military)...again all mine are set up for things.
in a all out SHTF, I am grabbing all packs and gone...if that is what is needed, and can do that in a New York Minute...I have things set up for others that would be there with me and things they will need...in other smaller packs, all basics are covered.
That big pack is by far worth every penny, I have used it for several years and it has held up great for me.
I have put it on my back and went out in the woods for over a week (in fall, winter, spring and summer) and still was fine, Just remember to change out the clothing and whatever other items you need to for the given time of year...if you pack that way.
I personally don't...due to if I am out and TSHTF...what if I need to be out for months and not weeks. I honestly think I could stay out for several months without having to really worry about to much because of what all I can carry in the big pack.

FYI, this is another jarhead.. grunt here that to has been on almost every climb and place...Australia and Antarctica are the only 2 continents I have not been on with a pack on my back.
edit on 24-1-2014 by saltdog because: (no reason given) 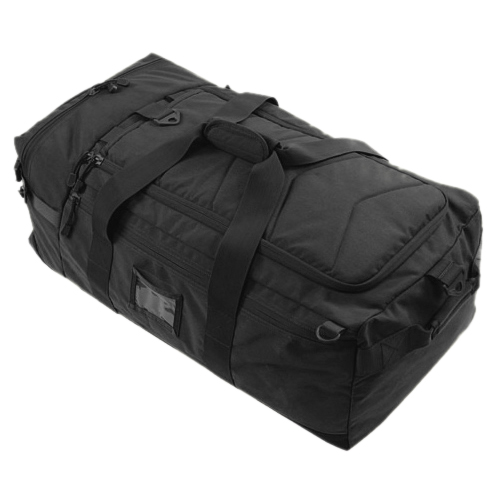 A duffel bag that has long enough flat-style handles (for shoulder comfort) can easily be worn like a backpack. Rather than stacking things on top of each other laying the duffel bag flat, you just stand the bag on end and stack your supplies in that way, nice and tight so they don't move around.

The zipper extends from end to end making everything easily accessable.

The extra long shoulder strap can also be used by extending from the bottom of your torso diagonally across your chest, up and over your shoulder as an added support so it doesn't move around... then strap a comfy extra-wide belt around the bottom of it, extended around your hip belt line to balance the weight off your shoulders... and voila !

You have a makeshift backpack.