It's so hot. Could we have some of that global cooling please?

The forecast temperature for today is 44 degrees Celsius. Yesterday it was 41 and the day before 42. Tomorrow it is expected to hit about 41 degrees. We're talking about 110 degrees Fahrenheit and over for those in the US, for an extended period. Usually in Melbourne there may be one or two days over 40, usually not consecutively.

A few years ago we had 47 degrees Celsius in the middle of a heat wave, and it was called a 'once in a hundred years event'. Last summer we had an extended period in March (when usually it's getting cooler in Melbourne) of over 30 degree temperatures, and now we seem to be having yet another 'once in a hundred years event'. I'm pretty sure 2013 was also the hottest year on record down under. 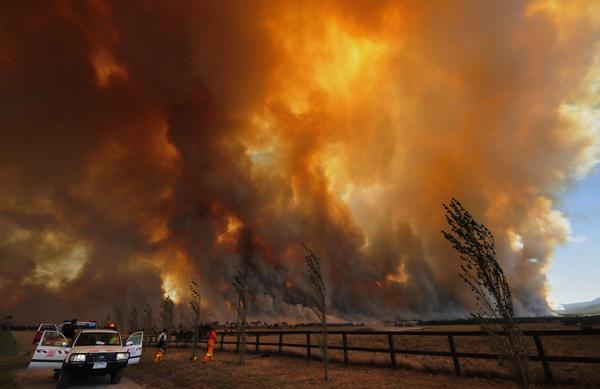 It's funny because I remember years ago when the idea of climate change was a blip on the radar, it was suggested that we would have a lot more erratic weather, including a lot more days over 40 degrees C.

Heatwaves in Australia are becoming more frequent, hotter and are lasting longer because of climate change, a report released today by the Climate Council says.

The interim findings of the report, titled Australian Heatwaves: Hotter, Longer, Earlier and More Often, come as southern Australia swelters through a heatwave, with the temperature in Adelaide today forecast to hit 46 degrees Celsius.

So what is happening with our climate seems to match very closely what was modelled some 20 years back.

I'd be so happy to have some of that global cooling down here, as there has been a noticeable warming trend for at least the last 15 years.

Southern Australia is caught in the grip of an extreme heatwave, which is fuelling hundreds of bush fires, causing power cuts and even prompting concerns about the safety of tennis players in the Australian Open, which is being staged in Melbourne.

Scientists say these heatwaves are one of the clearest examples of man-made climate change beginning to stand out from natural climate variability.

So those who believe the Earth is cooling, how about sending some of that weather down to Australia, where it is anything but.
edit on 15-1-2014 by cuckooold because: Heatstroke

I believe we are in climate extreme changes here on earth..


let's not jump to crazy town here.....sorry it is so hot from me driving my big SUV but let's wait and see what next summer is like ....

posted on Jan, 15 2014 @ 09:58 PM
link
Those kind of temperatures are kind of cool for a summer day here in Phoenix. I am just trying to wrap my head around this whole 70° F business that we have been seeing recently in the middle of January. Just seems kind of odd to me, but I have only lived in this area for about 3 years now...

posted on Jan, 15 2014 @ 10:00 PM
link
Maybe the US and Canada should make an international trade agreement with australia to share the cold and warmth extremes to balance out the highs and lows. It would look good on paper and I bet it could be used to justify government waste.

It would cost quite a bit to send snowballs to you. Maybe I can make a very big potato gun and shoot them down there.

It depends on where you are and the time frame.

Not too long ago, we were getting snow in places that had never seen it.

These days, its freezing in the US, while other places are experiencing a heat wave.

Seems to me like they're just making it up as they go along:

Anyone remember when they changed the meme from "global warming" to "climate change"?

It was right after we had a few years of incredibly frigid temperatures and snowstorms world wide. TPTB realized that the "global warming" BS was going to be a tough sell.


Just make sure that you aren't using hairspray to propel those snowballs like in the old days. You may end up melting most of the snow before it makes it out of the barrel.

okamitengu
I'm in adelaide, we are hitting 46-47 today.


Actually, we've just hit 43.1, and the temperature is still increasing.

I noticed you guys are sitting on the same temp, but I'd have to give you the edge.

You're more than welcome to it.

posted on Jan, 15 2014 @ 10:19 PM
link
It´s currently -23 Celsius outside where i live.
Nothing out of the ordinary for this time of the year.
Personally i can deal way better with the cold than i can with heat.

posted on Jan, 15 2014 @ 10:24 PM
link
So apparently Adelaide is the hottest place on earth for today , but come on us here in Melbourne haven't exactly got a cool one with 44 degrees C.

I'm not so sure about climate change, Melbourne has had hotter consecutive days a long time ago, and Adelaide's hottest recorded day was 50.7 back in 1960.

Hottest recorded day on earth was 57.8 degrees celcius in El Azizia, Libya back in 1922.

In fact from a quick look, I see that a lot of the hottest and coldest average temps for the year were recorded over 50 years ago, climate change must also come and go in those places too, pfft.

It seems you have to be pretty selective with your data to try and prove any type of global warming, at the moment I don't buy it at all. I'm not interested in data like 'well the average yearly temps of earth have risen this last 30 years compared to the 30 years before that, and the same with the average lowest temps'....and? lol that proves nothing, the average temp for a 30 year time span 200 years ago could of been higher than the average temp in the last 30 years. What do we have? 100 years of record keeping, yerp that's it, the rest is clutching at straws.


I propose a tube system. PVC is cheap (and toxic, but I mean, it's really cheap, and we have to cover thousands of miles!) The drafts that come through my doors and windows should be sufficient to propel my 0 to -20°F (-17 to -30°C) air around the world and send some of that Australian summer back up this way. Like a giant geothermal pump!

Don't anyone dare bring science or logistics into this - I can already smell summer coming through my theoretical pvc tube.

posted on Jan, 15 2014 @ 10:26 PM
link
Ski season where i live is horrible, wheve had more rain than snow this year, this time of the year, wheve been at 5 to -3, freezing lvl is way up this year, so it means part of the mountain is getting snow, the rest is rain. I live where powder snow is king, this year its more like slush.

Not sure about global warming but this is a weird winter for us.temperatures are usually around 0 to -5 celcius

Dogstar, yes I agree, id love a cool icy breeze coming through my house about now, instead I have 2 air conditioners and 3 ceiling fans working overtime to keep my house just bearable, a 5 minute stint outside for a smoke sends me running back inside to get a towel to wipe the sweat from my forehead, another negative effect of smoking. Apart form that Im reading these forums and playing Steam games all day and night to keep me busy on my 6 week holidays.

posted on Jan, 15 2014 @ 10:46 PM
link
Here in Eastern Washington it's been hitting the 50's during the day which is about 20-30 degrees above normal for this time of year. It should be very cold December through February here. We've also had hardly any snow in the mountains which is very unusual for Washington.

I can easily remember these sort of days when I was a kid back in the 60s and 70s. Sure we may break a record today, it may be 1/2 a degree hotter than the last hottest day but so what. This is Australia, it is hot in summer. Seriously a five day stint of above 100F is not unusual. Happens most years.

When I was a kid we didn't have air conditioners. You just sat quietly in front of a fan reading a book and being careful not to let your sweat drip onto the pages. You stayed hydrated.

But, bloody hell it is hot.

I highly doubt that. I remember as a youngster in the 80's, especially in 1983 when the Ash Wednesday Bushfires happened and it was 44/45 degrees Celcius for 4-5 days straight.

Is the media filtering out climate data to justify the left leaning climate change agenda?

So we're not getting a cold spell currently, its like March.


"climate change"... when it all balances out you want know what season it is...lol

Being that I hate cold, maybe we can change places... it was snowing when I got up this morning.