A man in Switzerland developed severe lead poisoning after undergoing an alternative medicine treatment — he took pills that he thought contained the hair of a dead Bhutanese priest, but the pills were actually replete with the toxic metal lead, according to a report of his case. 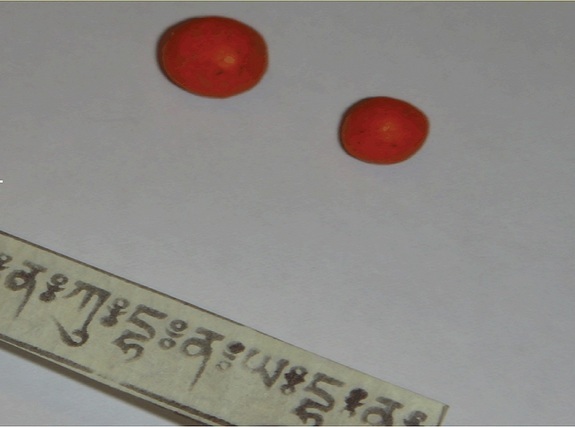 The Bhutanese traditional medicines the patient was taking consisted of parchment with ink writing and pellets that contained high levels of lead.


It took the man's doctors a week to find out that their patient was taking these pills, and that his symptoms were signs of lead poisoning. (In developed countries, lead poisoning is rare because lead levels in the environment are controlled.)
"It was a very difficult case. The patient had unspecific symptoms, such as abdominal pain, confusion, constipation, vomiting," said Dr. Omar Kherad, a physician at the Hôpital de la Tour in Geneva.
"We did all the normal tests — in this case, gastroscopy, CT scan, all the blood tests," Kherad said. "We did not find anything, initially."
The doctors finally asked the patient whether he was taking any traditional remedies, because although he lived in Switzerland, he frequently traveled to Bhutan, where people often use alternative medicine.

The doctors were "very surprised when he finally revealed he was taking these pellets every day for three or four months," Kherad told LiveScience.

The doctors then checked the level of lead in the patient's blood, and found it to be at least 100 times higher than what is normally found in people living in Switzerland.

The rest at: livescience


OK wow. I have been reading an increasing number of stories like this dealing with alternative medicines but this is the first one where it seems a man was riped off for something that I don't think anyone in their right mind would consider taking anyway. It was supposed to be "HAIR"!!!!

This just doesn't make sense to me on so many levels. The people found a rube to buy hair pills so why poison him? Wouldn't they want the guy to keep coming back?

Why not just find some hair and make some pills for the guy? And who paints pills?

I am thinking the poor guy who got sick is a special kind of gullible or he ran into a top notch con artist but I am leaning towards gullible because he didn't think to tell the docs when he got real sick"hey by the way I have been taking these mystic red pills made from some dead guys hair".


I feel for the man, that said when your back is to the wall and all else has been tried and done you probably will look for any and all solutions no matter how odd they seem.

Not all alternative medicines are junk in my opinion only, however it is a good thing you brought this to light so people can see just how bad they can get scammed when looking for a life saver.

At the end of the day when you are told you are going to die.......most would give anything a try to stay alive as its all they have left.
I hope they nab those people but it won't do the fellow thats probably going to be dead any good now.

posted on Jan, 15 2014 @ 07:49 PM
link
I wouldn't be eating someone's hair in the first place, it could give you bazoars. Bazoars are sort of like hairballs made of hair or even fiber from grains that don't digest. A sucker is born every day. Seems strange that lead paint would be used to paint these pellets.

posted on Jan, 15 2014 @ 07:58 PM
link
Wasn't it the Circus Magnate P.T. Barnes that said "there's a sucker born every day"? I mean, yes, that sounds horrible....but, people will screw you ANY chance they get. Common sense HAS to come into play at some point.


Well there really are two way to think in the end....

A: trust on faith

B: rely on the best medical practices of our time.


Personally i would choose the latter, pages upon pages of folks in a history......

It's not alway accurate but pretty damn good still considering the alternatives..and thier lack of precision.

posted on Jan, 15 2014 @ 08:06 PM
link
When a man is desperate he will go to extremes to find a solution, sometimes extremely bad ones. Live and learn.

Listen to your body!

One of the sad side effects with modern medicine has been the abdication of responsibility for your own health. Moving to 'alternative' medicine includes reclaiming this responsibility.

'Alternative' medicine means many things to many people. And no, it doesn't normally mean 'medicine without research and proof'. Just go search on pubmed for eg. Curcuma longa or curcumin. And most doctors would still consider treatment with tumeric as 'alternative medicine'. For their effectiveness, medicinal herbs are vastly under researched.

There are also 'alternative' medicines with less understood actions. My wife has been very I'll for 2+ years now and I've become deeply involved in the biochemistry of her healing. 10 years of convention medical treatment steadily poisoned her. Turns out the cause is accumulated Mercury, Aluminium and Fluoride in her system. Not something doctors normally test for and most likely a huge widespread problem.

'Alternative' medicine now has revived her and at the current progress it looks like she might be back to normal functional levels in 6 months.

The single biggest effect I've seen from any treatment was with a Bach flower remedy. Ht that's a story for its own thread.

The rest at: livescience


Same paint that raised radiation levels along the California coast?


Some of the oriental medicines are just so off the wall because people spend money for them. Look what happened when rhino horns were thought to be medicine for potency, uncounted numbers of rhinos were killed and mutilated. It's the consumer continuing to be gullible that keeps these folk-medicine sellers in business, and apparently to be more creative. Dead priest hair? If it worked the world's priests better be running for the hills.