posted on Jan, 15 2014 @ 06:03 PM
link
I have put this in ancient lost civilisation because i beleive there was one on Mars. Here are some bones,leg bones to be exact. Zoom in to around 7 oclock, mars.jpl.nasa.gov... you can't miss them. What do you think?

So what kind of civilisation was it? Ancient Earthlings who colonised Mars or the other way round? I don't buy NASA just looking for water, i think they know Mars had life. We know about the water and the conditions genial to life so what is curiosity really looking for?
If you think the bones are rocks then your right,mineralised bone is rock. This thread is about speculation so chill debunkers
edit on 15-1-2014 by symptomoftheuniverse because: (no reason given)

I see bones, and here at 9 oclock i see fossilised alien torso still in its skin/suit. mars.jpl.nasa.gov... this image is a couple of feet from the bones. Both images from navcam sol 152

Sadly, head held low, only rocks. But something did catch my eye at 5:00.

The photo does prove one thing though, Mars has winds

However, the bright speck at 12:05 is interesting - looks like a blown pixel !?

symptomoftheuniverse
So you can not see leg bones around 7 to 8 oclock, a quarter way up the second hand towards the centre?

No, I can see rocks and dust, no bones.

but they're still rocks


Ya when i zoomed in where you said, nothing jumps out at me as bones or such, maybe circle the area on your photo that you are looking at?


Ok, no bone shaped rocks? Do i have to circle them?

posted on Jan, 15 2014 @ 06:30 PM
link
I can not upload from my phone. If someone posts it for me i will be grateful and those that can not see them will look pretty blind.


Leg bones of...who...what? A human(oid) leg bone? It's pretentious to think anything found would fit our notion of biology (unless there is in fact the "we came from it/it from us" hypothesis). It's fallacious to look for something familiar on an a foreign (alien) landscape. For all we know the rocks themselves could be "fossils" of a "species" who looked like rocks and what you see as fossil evidence of humanoid is just natural martial landscape.

Proof: there be rocks on Mars, Capt'n!


You don't have to circle them but it would definitely make it easier to see what you're referring to and make a better judgement.

Why not human? An ancient earth civilisation a billion years ago could have colonised Mars. May be a dinosaur reptoid specis ,ancesters of all life-mammals in the solar system. Who knows? We humans think we are it,all theres ever been is us? I dont think so.


We humans think we are it,all theres ever been is us? I dont think so.


Nor do I. But trying to prove it by insisting that rocks are bones seems to me to be grabbing at straws.

Thankyou, im glad its not rock looking like bones.

Okay, if I squint my eyes and use my imagination, I can see something of a scene that looks like strewn bones and a badger like animal with a dog face on the left and a vulture like bird on the right, if I really squint! 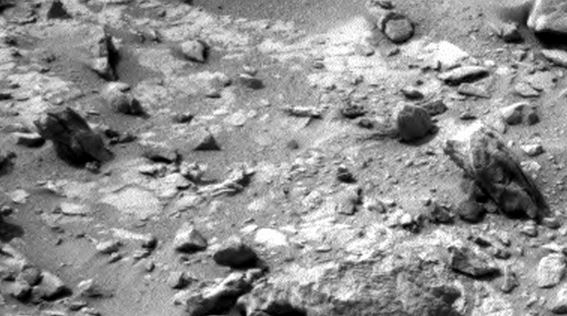 This one is a fresh human torso, ripped open, exposing the intestines, and magically turned to stone! 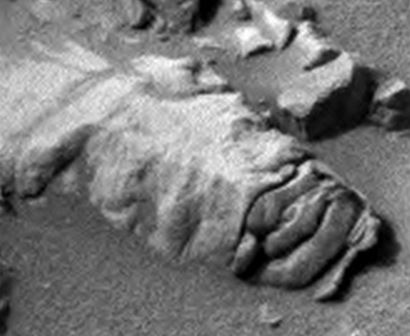 
Sremmos80Ya when i zoomed in where you said, nothing jumps out at me as bones or such, maybe circle the area on your photo that you are looking at?

Look at 8:30 one inch in from the circle, there is something that 'resembles' a perfectly cylindrical shotgun casing, not a rock. At 7 there is a naturally shaped cone 'rock?' Im serious, why have you all missed this; the cylinder looks machined and shiney.
edit on 15-1-2014 by vethumanbeing because: (no reason given)