Mexico on the brink of civil war?


In Mexico, a country home to powerful drug cartels, groups of armed vigilantes known as "fuerzas autodefensas", or self-defence groups, have formed in the past year. In recent weeks, they have even taken over communities in the state of Michoacan; in one case surrounding a city thought to be a key stronghold for the Knights Templar cartel and taking over nearby towns after violent street clashes.


In these newly occupied towns the citizen militia have disarmed and detained local police, claiming that both police and government forces are corrupt and in league with the cartels.


Mexico's drug war has wreaked havoc on the country, bringing staggering levels of crime and violence. These civilians, armed with AK-47s, have been fighting back in what they see as a bid to liberate the country. It'll be interesting to find out how this unfolds, if these militias keep growing then Mexico might find itself engulfed in a civil war between local militias vs cartels.

Will the U.S. Government keep supporting the cartels to keep the drug war going? Or will they side with the militias in hopes of installing a puppet government ?

Will the U.S. Government keep supporting the cartels to keep the drug war going? Or will they side with the militias in hopes of installing a puppet government ?

Maybe that's all they want, a civil war to put boots on the ground of the neighbor.. for safe keeping purpose of course


Nice thread! I would think that the number of those that would involve themselves in a militia would far outnumber those in any cartel and as such the US would have to side with them. This would push the US to use other means of trafficking the drugs into the US. Could have a lot to do with the push for the legalization of marijuana in many states. If legalized then the US could cut out a lot of the illegal drug trade as such and make a LOT more by taxing the drugs. As for coc aine and other drugs, I am sure the US will figure out another way to get them in here from Mexico while at the same time saving face on both sides of the civil war should that occur.

I could also see the US taking advantage of a civil war, should it grow in size, and attempting to take over the industry itself as it has done in Afghanistan and the opium fields....having them patrolled by US guard and whatnot.


I don't know if it will be the whole of Mexico, but many states, yes. I read a similar article and the pictures were amazing. My favorite is the vigilantes disarming the alleged corrupt police. See below: 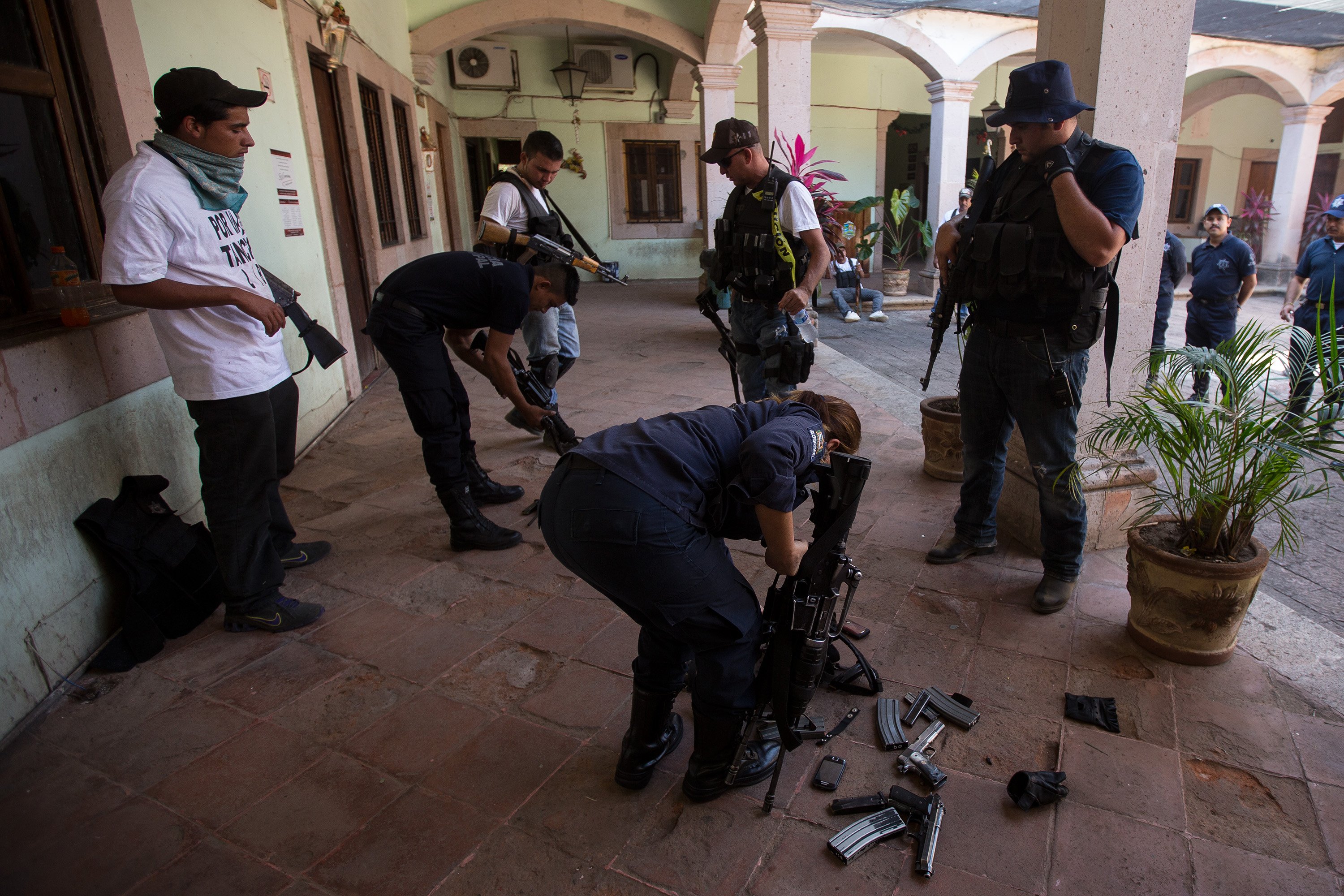 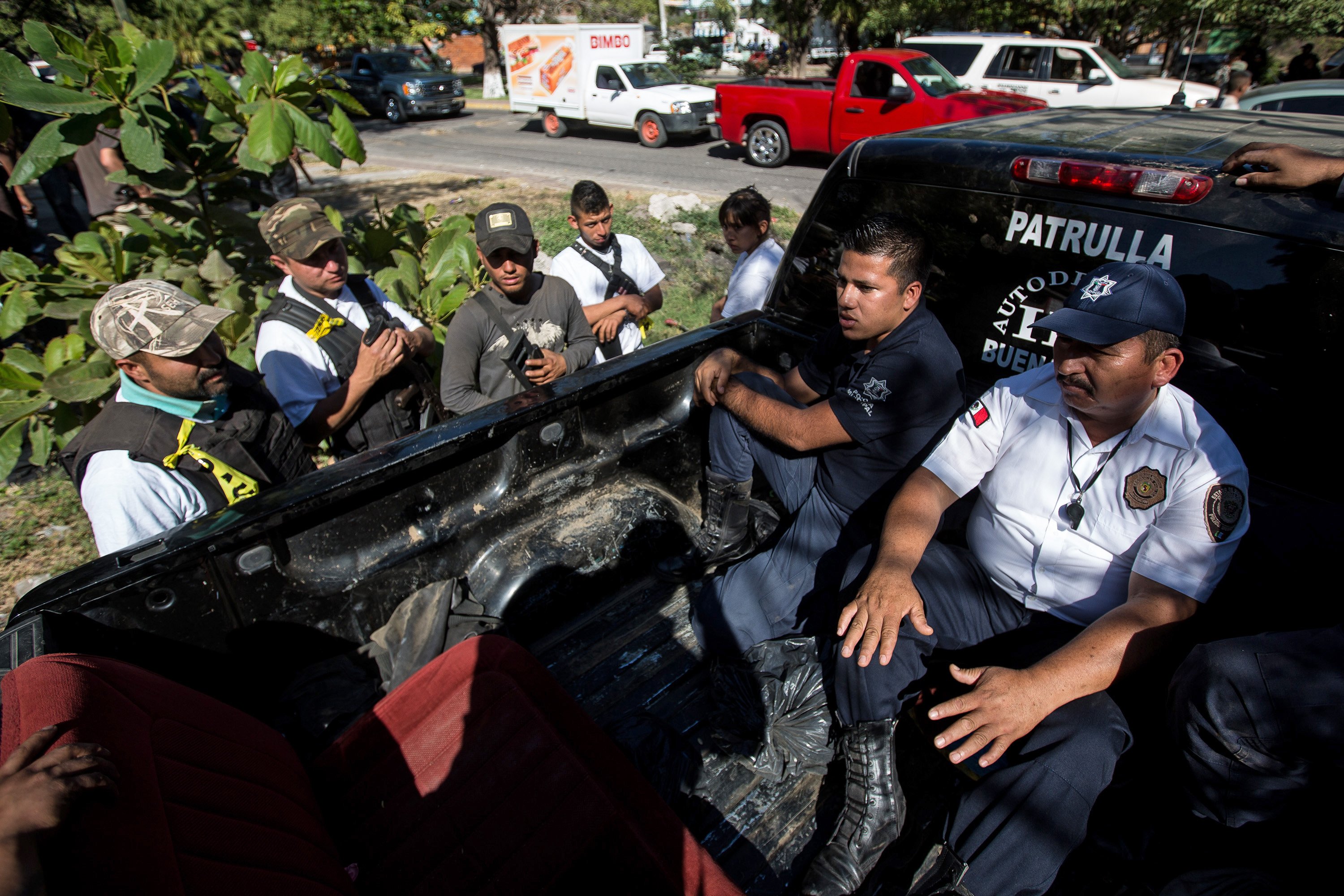 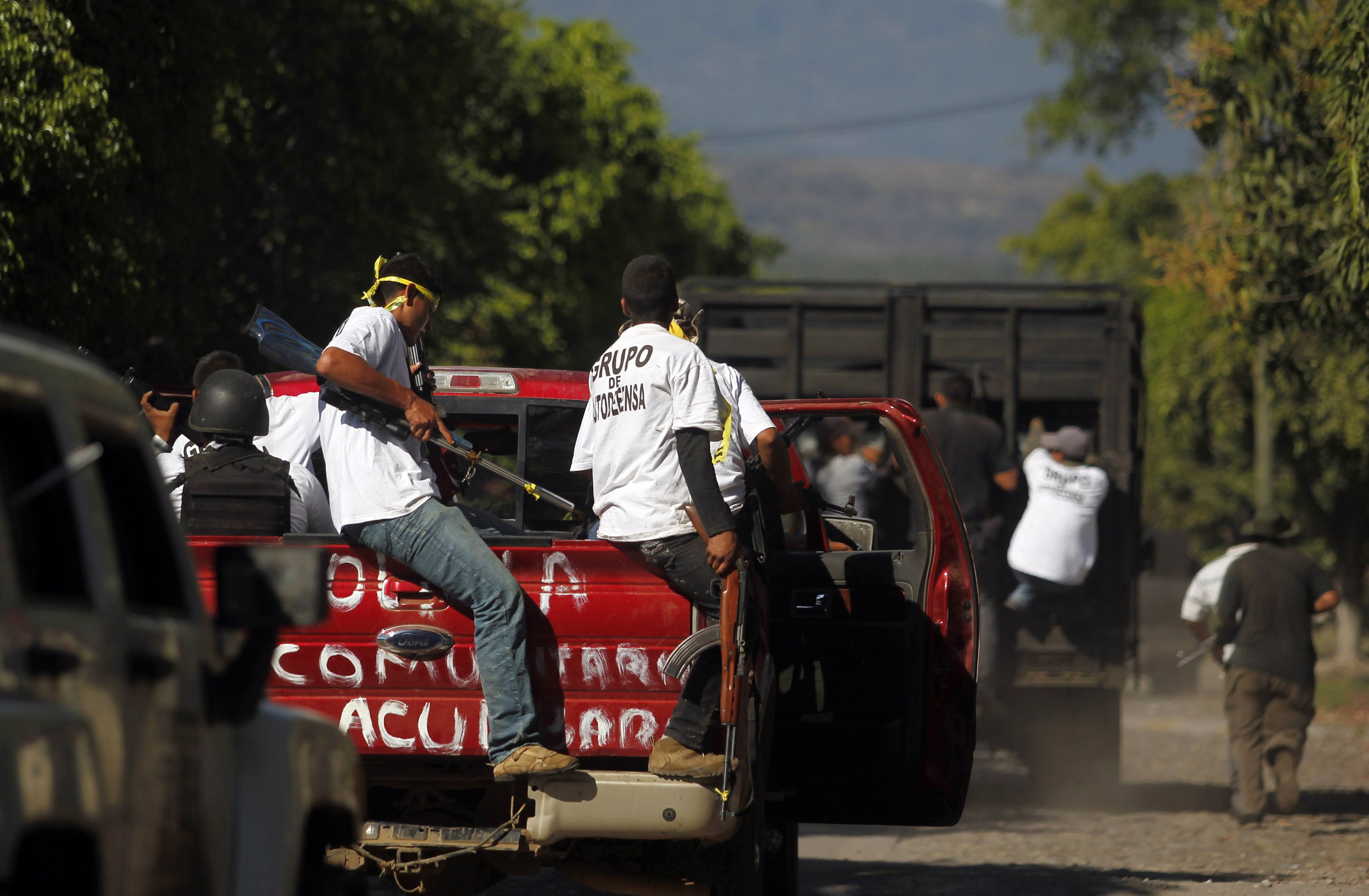 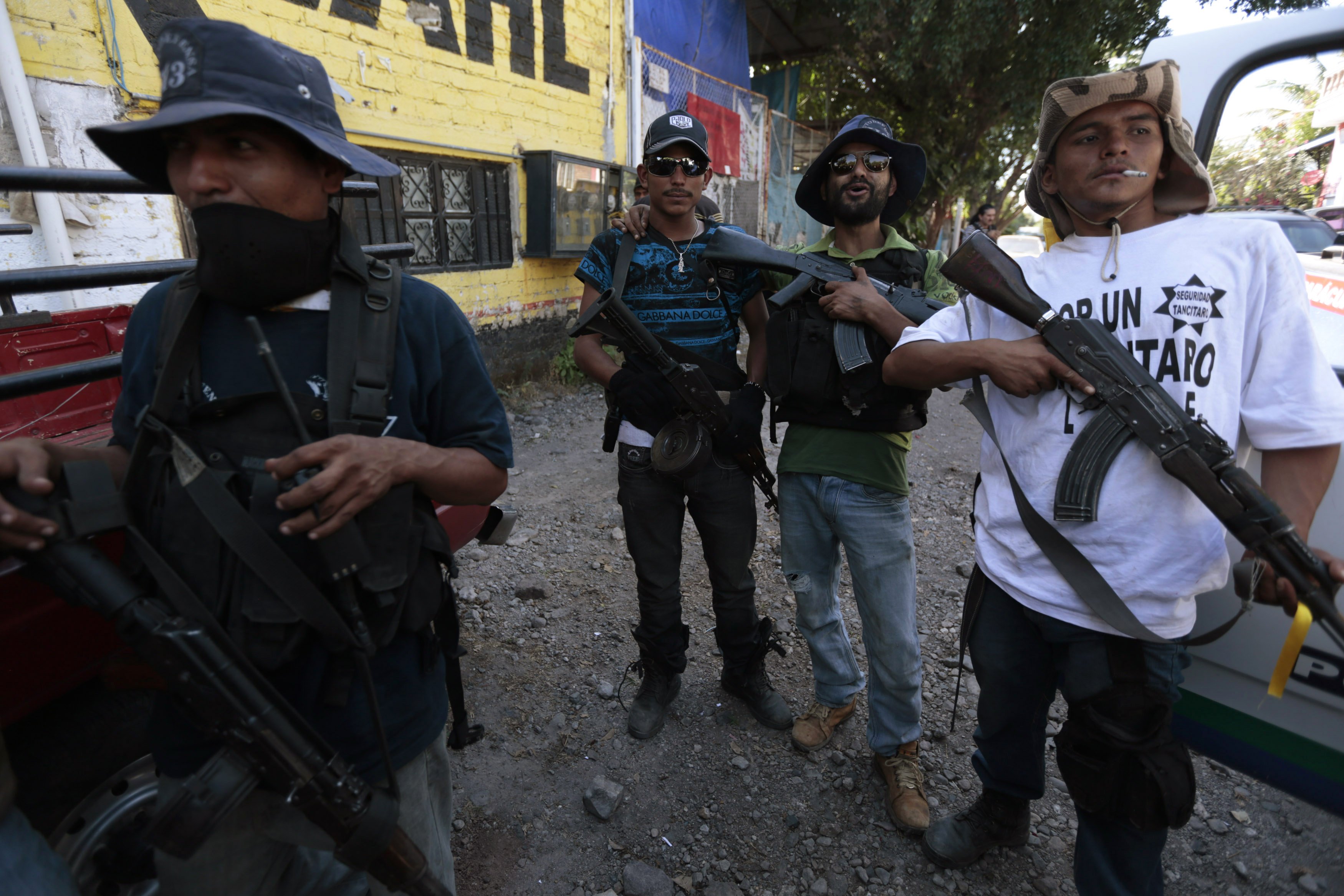 posted on Jan, 15 2014 @ 12:57 PM
link
From what I have been following down there? The Civil War has been raging since around 2006.... The local civilians seem have finally had enough to pick up weapons and defend themselves & communities. I'm very glad to see that. Maybe Mexico has a chance to come back.

Brutal murders, beheadings, and assaults on police and the media punctuate news reports from Mexico on a near daily basis — that is, the reports that make it to the U.S. While the common perception is that insecurity is high, official accounts downplay the extent and impact of the violence. Indeed, many media outlets still quote a death toll of 60,000 to 70,000 since the drug war began in 2006. This is both inaccurate and disingenuous. Researcher Molly Molloy suggests that a more realistic estimate is more than 130,000 deaths.

I have to say...going with the higher or lower number? That's a war by anyone's measure to my thinking.... Here is hoping the people down there find peace some time soon. They sure need it.

In neighboring Guerrero, members of the Public Safety System (the name of the vigilante group) marched to commemorate the first anniversary of their founding. 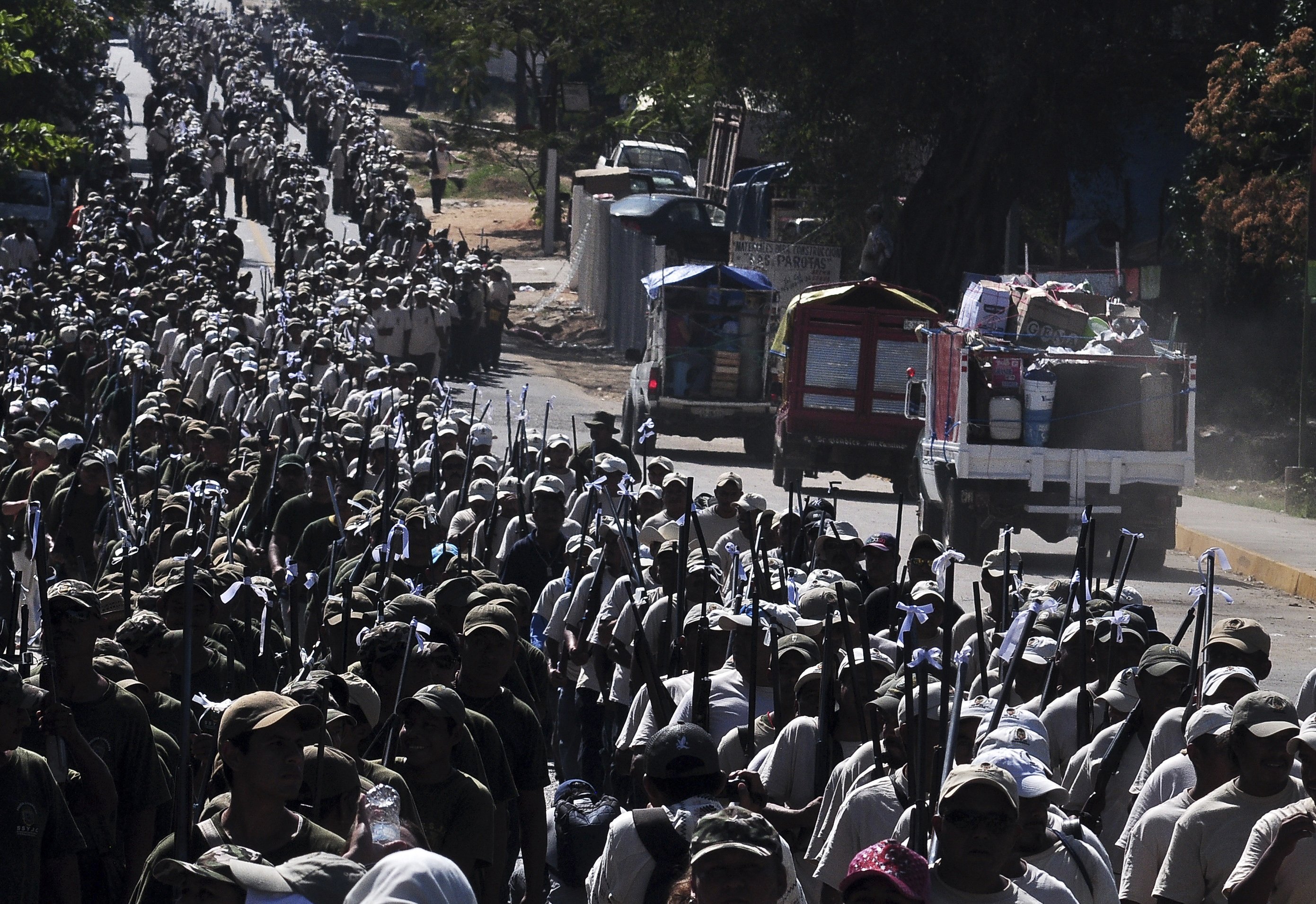 posted on Jan, 15 2014 @ 01:00 PM
link
IMO, at some point, the U.S. government will have no choice but to stop supporting the cartels as much since a certain drug has now become legal in 2 states for recreational use and sale. As long as the price stays at least somewhat competitive to the black market, then the illegal drug trade coming from Mexican cartels will lose unfathomable amounts of money. This particular prohibition in the U.S. is ending and I'm sure it will spread across all 50 states like wildfire soon enough.

As a result, I see the people of Mexico and their "militias" winning this war in the long run since the cartels will eventually lose funding and support. Just my opinion, of course. Thanks for the thread, interesting times.
edit on 15-1-2014 by Wookiep because: (no reason given)


i see this pictures and its bad, i can only think of Colombia.

If this paramilitary wins over the cartels why demobilize, after all the Mexican Gob was the one that allow the cartels to grow in the first place. and if they dont win the cartels will just gain more power.


It is truly sad when we honestly have to ask ourselves with whom the US government would side with.

My concern would be, how they handle things if they succeed. Power does corrupt, and all.

And I hope for their sake our government stays the hell out of it, including stop aiding the cartels.

posted on Jan, 15 2014 @ 01:20 PM
link
I would almost bet that some sort of ABC agency from the U.S. helped this little civil war. After all, Der Fuhrer Obama is going to visit North american leaders soon.

What usually happens in these sort of situations is that the citizens start out fighting for the moral cause of survival against a corrupt group, in this case the government(cartels, police, etc). Then they end just becoming another government(government is a group of different industry cartels that write their rules on paper).

Either way, as long as the U.S. is backing the Mexican government/cartels it will be difficult for these people to do any widespread change. But even small differences in communities is a good thing in my opinion.

I had to smile at the photos of citizens putting corrupt policemen into their proper place.

posted on Jan, 15 2014 @ 01:27 PM
link
Funny you should bring this up as I was speaking with a Mexican national yesterday about this very subject. When you have corrupt police, military, and government officials on the take from the cartels who turn a blind eye to the suffering of the local people what are they supposed to do; bend over and take it? The town where Juan is from has taken up arms which ain't no easy matter in Mexico because of the price of the guns and the government being happy with an unarmed citizenship... Which has not worked very well has it ?


He is asked about is what's circulating on the social networks and the news is that he authorizes the disarmament of the autodefensas, he is asked "is its true?"
He says he has not not authorized or unauthorized any disarmament of auto defense community and when the group is going to make a decision, they meet in general Council first, there is no one person from the general council that can authorize or overrule anything, the full council would have to be there to discuss the issue, as to why they would want to disarm or arm.
He is asked to clarify his personal stance, asking if he is in favor of disarming the autodefensas…
He says no, he is not in favor of disarmament. What he agrees with, is that that when they apprehend the 7 major organized crime heads, and restore the rule of law, in all Michoacán, then we will sit down and discuss it. He says they will continue to accommodate people that for the necessity to save their lives had to arm themselves, so if they want to continue being armed, they can utilize legal methods.
and finally he is asked; what would you say to all the people that support and follow you?
He sends a message to the people, that he appreciates all their actions of moral support, and to please remember their economic needs. That he is grateful for the moral support from people, not just in this difficult situation but during the entire movement


Below is video footage of the liberation of Nueva Italia, the day prior to the arrival of the army and where a day later the army would kill two unarmed citizens


Estanislao Beltran, spokesman of the General Council and Community Self-Defense Forces of Michoacán, said the army opened fire on civilians, killing four people including a girl of eleven years.
According to Beltran, members of the Army gunned at least eleven people in the community Antunez in the municipality of Parácuaro.

"What we are doing is defend our family, our people. The government has not cared for 12 years for our safety. Army arrives and disarms us our partners ... Following this, the people took to the roads to stop the Army and asked for the return of the arms to the community because they were defending their communities "refuted Beltran.
The spokesman of the General Council of Self-Defense and Community Michoacán said the population does not trust the authorities, because during the last twelve years have not seen for their safety, on the contrary, accused the state government of being fully collusion with the criminal group "The Knights Templar."

Three former Mexican police officers, placed in the witness protection program since the 1990's, gave Proceso details of the kidnapping and torture of DEA agent Enrique "Kiki" Camarena in 1985. But there's more: these witnesses assert that Manuel Bartlett Diaz, then the Mexican Secretary of the Interior, and Juan Arevalo Gardoqui, Secretary of Defense, witnessed the torture of the DEA agent.
CALIFORNIA, U.S. (Proceso).- In collaboration with drug traffickers and with the CIA, Miguel Bartlett Diaz and General Juan Arevalo Gardoqui participated in the interrogation of DEA agent Enrique Camarena, who was tortured to death in February of 1985.

War brings profits, so do drugs. By keeping certain drugs illegal the street value skyrockets. I think there is a vested interest by certain very powerful entities to keep the drug war alive. It is a messed up situation that essentially funnels tax payer money, sales from weapons, and sales from drugs to a few elite interests.


It is truly sad when we honestly have to ask ourselves with whom the US government would side with.


Rather it's sad that we didn't used to and encouraging that now we do, well maybe it's futile now. The US historically supports the wrong side, that's the side that will keep their people oppressed so our corporations can get in, set up factories and win the hearts of the locals with slave labor... er jobs.


This could be a bad thing for the US. Al 'Qaida loves these areas of unstableness, and if the intelligence briefing a few years ago is true they already have several groups working in Mexico. If Mexico does go full on Civil War, how long do you think Al 'Qaida will take before they exploit it for attacks on the US?

posted on Jan, 15 2014 @ 01:35 PM
link
I don't like the idea of war but im all for the cartels getting kicked out. My only fear is that these militias would turn out to be just another cartel popping up to replace them. One thing that I do find hilarious due to my own amoral political leanings and sense of humor is that mexico is really what so many would like in the US. They have decriminalized drugs and have some really strict gun laws, look how that just fixed all their problems.lol