Jan. 14, 2014: Are we there yet?
One of the fastest spacecraft ever built -- NASA's New Horizons -- is hurtling through the void at nearly one million miles per day. Launched in 2006, it has been in flight longer than some missions last, and it is nearing its destination: Pluto.
“The encounter begins next January,” says Alan Stern, of the Southwest Research Institute and the mission’s principal investigator. “We’re less than a year away.”

Closest approach is scheduled for July 2015 when New Horizons flies only 10,000 km from Pluto, but the spacecraft will be busy long before that date. The first step, in January 2015, is an intensive campaign of photography by the Long Range Reconnaissance Imager or “LORRI.” This will help mission controllers pinpoint Pluto's location, which is uncertain by a few thousand kilometers.
NASA

So finally during the next year we will get better photos of Pluto. New Horizons is fastest satellite ever created and is soon reaching the Pluto system. Pluto has been very unknown for us. Hubble has taken sharpest photos of Pluto, and they look like this: So we know very little about this alien world. We have discovered that it as 5 moons: Charon, Styx, Nix, Kerberos and Hydra. Charon is so big that it could be called double system, since gravitation center is between them. Pluto even could have ring system, and if it has, New Horizons will find it. If New Horizon would be in Earth's orbit, it could see individual buildings.

posted on Jan, 15 2014 @ 11:04 AM
link
Thanks for the info! I knew very little about Pluto but maybe well find more information come January!!

We can build things that fast?? Or is it easier to reach those speeds in space?

Too bad the pictures won't be as good as they would be if it was orbiting earth.
Pluto could have given Mars a run for the "this rock looks like..... Threads.

posted on Jan, 15 2014 @ 12:09 PM
link
So I wonder what they're gonna do when they image that ancient outpost that's been sitting there since before modern man came along?


Launched directly into an Earth-and-solar-escape trajectory with an Earth-relative velocity of about 16.26 km/s (58,536 km/h; 36,373 mph) it set the record for the highest velocity of a human-made object from Earth. Using a combination of monopropellant and gravity assist, it flew by the orbit of Mars on 7 April 2006, Jupiter on 28 February 2007, the orbit of Saturn on 8 June 2008; and the orbit of Uranus on 18 March 2011.


Thanks for the info Erik!


Very cool. Never let it be said that science doesn't have it's
strong points.

Thebel
Hubble has taken sharpest photos of Pluto, and they look like this:

The real photos are fuzzy and can be seen here in the fuzzy pixellated dots at the top:

The large lower images are processed versions made from a number of Hubble observations. The smaller images at the top are actual raw images, each pixel is over 150 km across.

The sharp edges on the bottom processed images were my first clue they aren't photos.

This points to all the more reason we need clearer photos of Pluto.

Blowback
I feel sorry for the New Horizons spacecraft it's going to get all the way out there to Pluto & nobody has informed it that Pluto is no longer a planet anymore...
edit on 15-1-2014 by Blowback because: (no reason given)

New Horizons was always envisioned as a mission to explorer Kuiper Belt Objects. Pluto is one of them. It will explore others after the Pluto flyby.

We can build things that fast??

Yes. But that's not how it got that fast.

But yes, ion propulsion over time or fusion pulse propulsion could get you that fast.

Or is it easier to reach those speeds in space?

Yes. Because of gravity assists from the planets. That's how New Horizon's speed was built up. 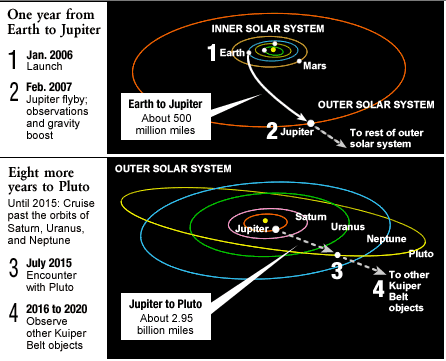 posted on Jan, 15 2014 @ 04:18 PM
link
The New Horizons used Jupiter as "slingshot". It gained enormous speed increase when it passed Jupiter from 2,3 million kilometers away. Same time it took pictures of it. Before the gravity assist, New Horizon's speed was 14 000 km/h, but after it was boosted to 84 000 km/h (heliocentric velocity). Same time the travel time to Pluto was decreased by 3 years. Jupiter is very massive and perfect way to get extra speed.

New Horizons has already proved its worthiness. It took important pictures of Jupiter that were better than previous Galileo mission. "The Little Red Spot" was imaged first time from close. New Horizons tried to find new moons from Jupiter's ring system, but didn't find any. It also photographed Jupiter's moons.

After the gravity assist, New Horizons was set to hibernation mode. Jupiter was its last "stop" before Pluto. Saturn, Uranus and Neptune are elsewhere.

The New Horizons doesn't have any solar panels, as their power would be very weak there. It has Plutonium-238 battery, which gave 250 Watts at launch, and drops approx 5% per year, 200 Watts when it encounters Pluto. It was actually opposed as people feared that if launch was failed, Plutonium would have spread all over the United States (It has 11 kg of Plutonium oxide pellets)

Mind you, they'll get a shock if it turns out Pluto and Charon are actually a couple of derelict death stars

Those Hubble images seem to show a massive crater in the South that covers almost half of the hemisphere.

Not long to wait now though.

posted on Jan, 15 2014 @ 04:52 PM
link
Because New Horizons, like the Voyager and Pioneer probes before, will leave our star system and venture into interstellar space there is a drive to put a little bit more about Earth and its inhabitants on it.

Unlike the Pioneers which featured a gold plaque..... 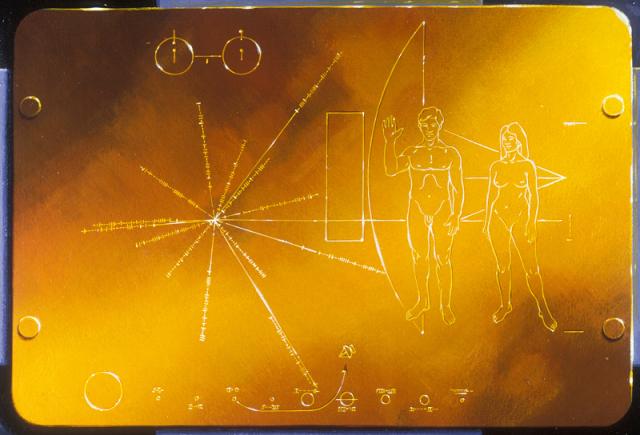 And the Voyagers which featured gold records which were humanity's way of making a statement to the cosmos, containing sounds of nature, samples of music, images of Earth and greetings in 56 languages. 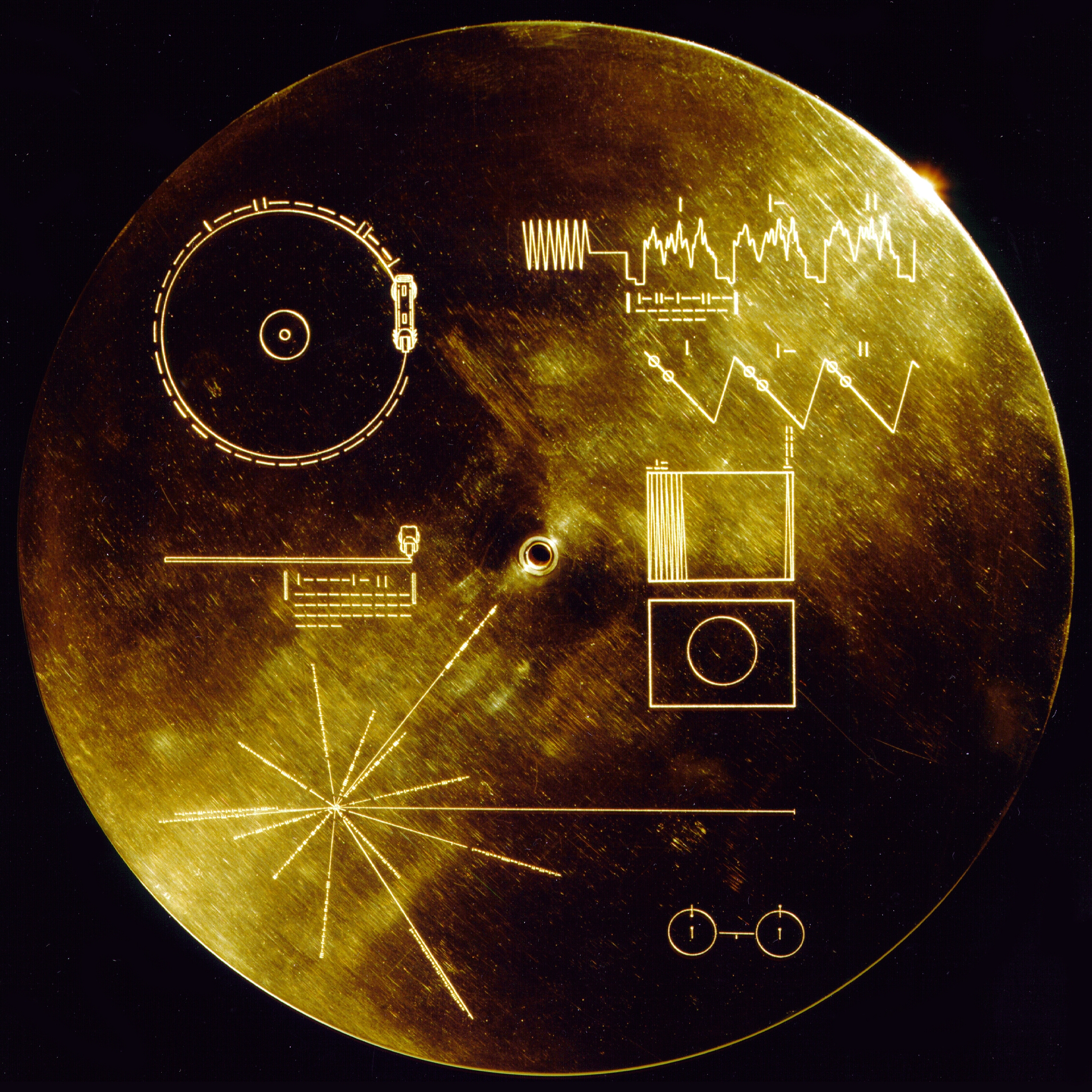 .....New Horizons has no physical object attached to it to tell anyone who made it, where they lived, what they looked like, etc. 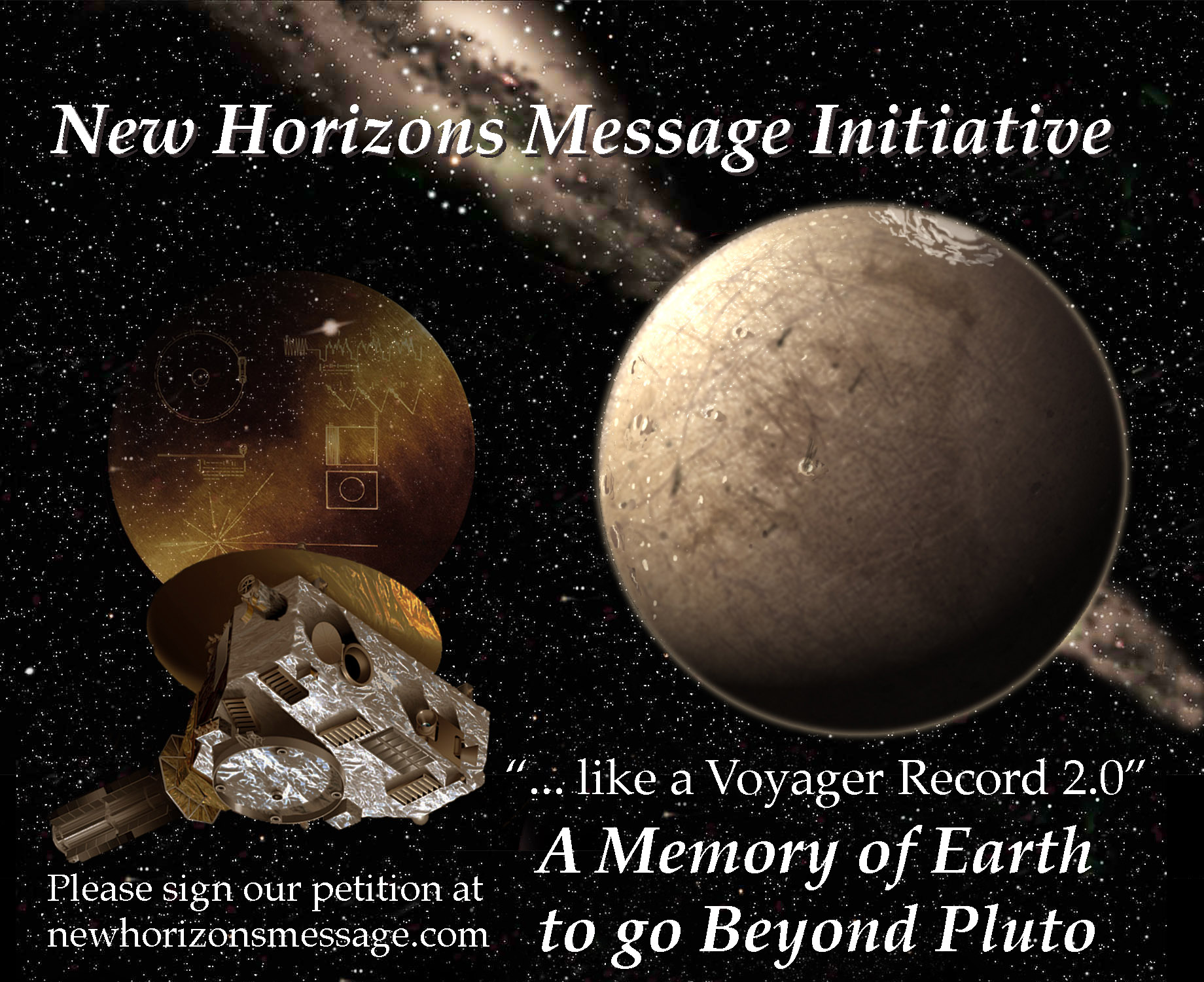 Your Chance to Speak for Earth in a “Voyager Golden Record 2.0”
JOIN US TO CREATE A SELF-PORTRAIT OF HUMANITY TO SEND TO THE STARS ON NASA’S PLUTO MISSION, NEW HORIZONS.

The New Horizons Message Initiative hopes to persuade NASA to upload a crowd-sourced message to the spacecraft’s memory, following a successful Pluto encounter. The form and content of the message are yet to be determined, but will probably consist of pictures and, possibly, sounds. This is a project to create and implement that message.


To me, the most important part of what we are doing is the Message TO Earth aspect. Literally nothing is more important than raising planetary consciousness, a planetary perspective, given the global problems we will face in this century. We can play a worthwhile part in that.
~ Mark Washburn


I'm confused, please...
I thought the gravity of planets (particularly massive ones like Jupiter) pulled things towards them-- like 'capturing' a body into orbit (aka satellite/moon.)


Objects can be captured or flung away at higher velocities. It's orbital mechanics. A planet's gravity is a force and depending on how one approaches that force it can be used to speed up or slow down a craft or other body, depending on the speed of the object and angle of approach.

Now I hear passing a planet makes something pick up speed?

The pic didn't zoom in on Jupiter enough to really see it.

Bill Nye will explain it to you.

While he is talking about the Juno probe's flyby of Earth to gain speed on its trip to Jupiter, New Horizons executed a similar maneuver to gain speed to get to Pluto faster than it otherwise would have.

First, let's consider what a gravity assist flyby (of Jupiter, for example) looks like relative to the planet being flown-by (as if the planet was sitting still):

...thus the net effect would be to cancel out any gain in velocity. The spacecraft would not speed up.

Here is an excerpt from an artical named A Gravity Assist Primer, which is the source for the images above:


The planet's own motion is a key. A gravity assist with Jupiter involves not a stationary planet as considered above, but a planet with enormous angular momentum as it revolves around the Sun. In the diagram at right, Jupiter's motion along its solar orbit has been illustrated with a vector colored red (simplified, of course: Jupiter revolves along an arc, not a straight line. Imagine the Sun situated below the bottom of the diagram). The spacecraft acquires this Sun-relative vector, or a significant portion of it, during its interaction with Jupiter.

You can see how the red vector is added to VIN and VOUT. The resulting vector shows how the spacecraft's velocity, relative to the Sun, takes on a nice boost from Jupiter. Notice how rotation of the vector from VIN and VOUT (the bending of the spacecraft's path by the planet's gravity) helps increase the result. This trajectory bending is the other key.

posted on Jan, 17 2014 @ 05:26 AM
link
It's also worth pointing out that the planet itself loses orbital momentum during a gravity assist manouevre. This is where the spacecraft gets what appears to be "free energy". However, the planet is so massive when compared to the tiny spacecraft, that the effect on the planet's orbit is essentially negligible. After all, far more massive objects (comets) are regularly subject to gravitational encounters of this kind.
edit on 17-1-2014 by Mogget because: (no reason given)