Amazing New System Harnesses Sun’s Energy For Use at Night 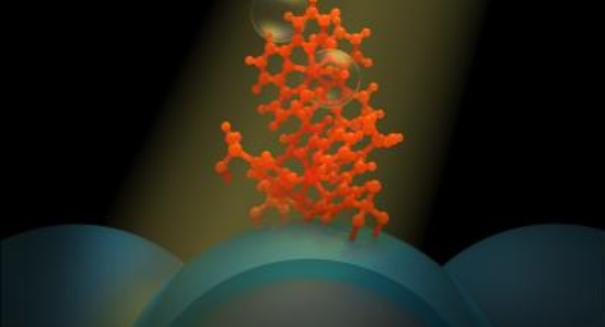 Amazing new system harnesses sun’s energy for use at night

According to a news release from the University of North Carolina at Chapel Hill, researchers have developed a system that converts the sun’s energy into hydrogen fuel during the day and keeps it for use at night.

“So called ‘solar fuels’ like hydrogen offer a solution to how to store energy for nighttime use by taking a cue from natural photosynthesis,” said Tom Meyer, Arey Distinguished Professor of Chemistry at UNC’s College of Arts and Sciences, in a statement. “Our new findings may provide a last major piece of a puzzle for a new way to store the sun’s energy – it could be a tipping point for a solar energy future.”

According to the researchers, the sun generates enough energy in one hour to power every vehicle, factory and device on Earth for an entire year. Although solar panels can harness the energy to produce electricity during the day, they lose the ability to power our devices when the sun goes down at night.

The new system is a dye-sensitized photoelectrosynthesis cell, or DSPEC, and it produces hydrogen fuel by utilizing the sun’s energy to split water into its component parts


I read this earlier today and thought by now it would have been posted. I did a search under the title and came up with nothing. This seems that we as a species are starting to reach Type 1 civilization levels. If we can keep the ball rolling before we do ourselves in with pollution, overpopulation and depletion of our other natural resources and continue with our increasing space exploration and exploitation I believe there will be no stopping us from becoming a true space fairing species.


My first immediate thought was, "Off the grid, off the grid!!!"

posted on Jan, 15 2014 @ 08:25 AM
link
Man, I hope this works out like they think it will. THE turning point for humanity possibly. Im curious about the "left-overs", would that be pure, clean oxygen?
Thanks for that one.
S n'F.


this is not a solar panel, sorry

My first immediate thought was, "Off the grid, off the grid!!!"


Mine was, "I wonder what happened to the water on Mars?


The new system is a dye-sensitized photoelectrosynthesis cell, or DSPEC, and it produces hydrogen fuel by utilizing the sun’s energy to split water into its component parts.

Good find, Slayer. Another feather for your cap, brother.

posted on Jan, 15 2014 @ 08:30 AM
link
This things are being actively developed, for now they have low efficiency, and catalyst cost more than what can be generated in around 30 years. the current focus is the use of polymeric catalyst that are cheaper than metallic ones but for now are less efficient and degrades much faster.

This kind of technology has been around for quite sometime, but has never made it to the market. Take a wild guess why!


You didn't read the article.


So it converts Solar energy directly into hydrogen and not Solar - electricity - cracking water..is that right?


if they get it up and running how long before we're taxed to death for using it and blamed for killing the sun?

Very dangerous and most every container leaks H to a degree...they'll have to use powdered Hydrides somewhere along the line, or a lot of houses and factories will probably be going boom.

MysterX
They'll have problems with storage of the H.

Very dangerous and most every container leaks H to a degree...they'll have to use powdered Hydrides somewhere along the line, or a lot of houses and factories will probably be going boom.

Can you describe anything more dangerous than a 1 ton + steal vehicle hurling down a Highway at over 70 mph with a full tank of Gasoline?

jrod
And the big oil companies will buy this patent and hide it.

I don't think big Oil has the power to hide the technology if it is patented, which much likely will be or is. I believe Universities usually deal with patents and not trade secrets.

My understanding is the Gov't federal agencies are the only ones that can declare it classified under the guise of National Security .

so if it is hidden it would be the Gov't that hides it.

Of course Big oil could always lobby a good amount of money to show Gov't how it could be a concern of National Security. However, that would be unlikely since Big lobbying efforts don't have any influence on our politicians.


most chemicals transported are far more dangerous than gasoline.

one truck of propylene


Deep cycle batteries(and car batteries) are known to produce Hydrogen gas as a by product. The gas leaks out and some even have warnings.

Using a simple battery or PV panel you can make H2 and O2. It works better in salt water. What I like to do is put soap in the water so the gasses for bubbles, just add a spark and the bubbles go boom. Electrolysis of water is a very simple science experiment.

I would not want to drive a car with a compressed H2 gas tank, however in a controlled setting where the gas canister is not in danger I do think we could use the H2 effectively and safely.


They have hidden technology in the past and will continue to do so. It much tougher today that it was in the past thanks to the internet. It still happens though, it is the nature of capitalism. A large wealthy industry will always try to stomp out new ideas and technology that threaten their business. Cheap energy is something they do not want the average Joe to have when they can sell energy and petroleum and make an enormous profit.


Re read my post, I think you missed the point. Big oil can't do it by itself it would require the Federal Gov't to hide the technology as well. So they would both have to be involved in hiding it, which I don't necessarily doubt they would.


Big Oil and the Federal government are essentially the same entity thanks to the corporate oligarchy that is still called the USA.

This stuff really happens. Plenty of threads here on ATS that discuss this. The deeper you dig, the more insane it gets.

posted on Jan, 15 2014 @ 09:36 AM
link
a guy made vertical blinds with solar cells in them that absorb sun light during the day, and then canbe used to light your room at night. no need for lamps, light bulbs or overhead lights as long as the window in question is receiving sufficient sunlight during the day. the solar cells in the blinds, store the energy in a battery which is then used to light your room via the blinds themselves which apparently have LED lights in them.
edit on 15-1-2014 by undo because: (no reason given)