The Congressional Budget Office projects that 16 million will gain coverage via the law’s Medicaid expansion (9 million) and subsidized exchange plans (7 million) — and even that’s rosier than the enrollment figures we’ve seen so far.

The young adults are not even signing up for it and they're the main ones Obamacare was designed for
Maybe they are more concerned with their college tuition or just their average monthly bills much less worrying about their health just yet.
Hell when I was in my 20's, I never had health insurance on my mind


On average, US workers with on-the-job individual coverage contribute $999 a year in pre-tax dollars and have a deductible of $1,135, according to the Kaiser Family Foundation. On ObamaCare exchanges, all but the lowest earners will pay more (even after subsidies), pay with after-tax dollars, face deductibles of $3,000 to $5,000 for silver and bronze plans and lose access to many doctors and hospitals they’re covered for now.

How many people will this change clobber? Well, about 60 million Americans now get employer-provided insurance via small-group plans. Law firms and other high-end businesses are unlikely to drop coverage, but companies with lots of salespeople, receptionists and other lower-paid workers will say they can’t afford Washington’s “one size fits all” requirement — which, the Heritage Foundation reports, adds an estimated $1.79 an hour to the cost of a 40-hour worker (and more than $2 an hour in states like New York and New Jersey, where health care is more expensive).

Even the chance that ObamaCare’s “employer mandate” will go into effect in 2015 isn’t apt to deter employers from dropping coverage. The penalty for not complying with the mandate would add only 98 cents an hour for a 40-hour worker — a bargain compared with the $1.79 cost of providing coverage plus the enormous amount of red tape, reporting requirements and fees that ObamaCare piles on employers who provide coverage. In truth, the law discourages employers from insuring their workers, making it far easier and cheaper to send them to the exchanges.

So a conservative estimate is that 25 million people, out of the 60 million in small group plans, get dropped in 2014.
Add that to the 5 million or so whose individual-market already canceled on Jan. 1, and you have a lot of losers.

Hmmm, between the people losing their original plans, their doctors, now the taxpayers may get socked with more fees if the insurance companies need bailing out, a clause they failed to mention to the American people until now, what else will we be hearing about tomorrow or next month??

Can anyone say Epic Failure??
Not as much positive news regarding ACA than there is the negative side of ACA I'm afraid

The greedy and evil LOVE this concept!

The young adults are not even signing up for it and they're the main ones Obamacare was designed for
Maybe they are more concerned with their college tuition or just their average monthly bills much less worrying about their health just yet.
Hell when I was in my 20's, I never had health insurance on my mind

That's Right, Obama figured his young mindless followers that had been initiated in the Public School system would be stumbling over each other to sign up for Obamacare. 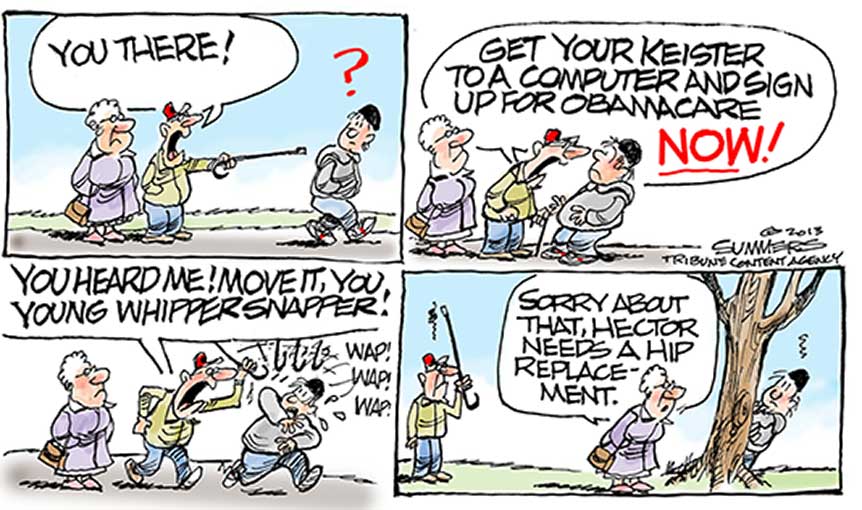 
That's Right, Obama figured his young mindless followers that had been initiated in the Public School system would be stumbling over each other to sign up for Obamacare.

Yeah well, TPTB didn't figure in the millennials lack of trust when it came to Obamacare


Unlike the mainstream media, a majority of Millennials are able to see through the scam that is ObamaCare. Only 18% think it will improve healthcare, while 40% believe healthcare will worsen. A majority of 51% have figured out that ObamaCare will increase the cost of insurance. Only 34% believe the opposite.


I saw an article today where some major hospitals are now going to get their own "police force" - one in Ohio? can't remember the other one -

Now, we are going to be thwarted through police brutality to stop us from getting some emergency treatment?

Sorry, I was one of those that saw all of this coming.

There was another article about the FEMA 5 district in the state of Georgia, and the mental hospital right next door that was closed down and is now got military people going in and out of it =

Things are looking mighty strange in the USA.
edit on 14-1-2014 by Happy1 because: (no reason given)


It would seem that Obama thought if the young people believed his lie's and put him in office they would line up for ACA.


The employer mandate would have finished the democrats in 2014 which is why Obama pushed it back. Still some of the number just released by the WH were portrayed as "upbeat."


White House previously claimed they would need 40 percent of these “young invincibles” to buy insurance through the federal exchange. But when Lui asked what number they would need to make Obamacare work, Emanuel sang a markedly different tune. “Actually, at about a quarter it’s probably good enough,” he asserted.


According to their figures they got around 25% young folks tricked into signing up.

Whoops.. This whole thing is giving me a headache.

posted on Jan, 15 2014 @ 01:28 AM
link
This thing is taking the longest to crash and burn as anything I have ever seen in my life. They are literally pumping the chest of Obamacare as I type this, refusing to let go of the "False Dream".

Epic failure doesn't even begin to cover it, as real people are being hurt and dying (at this point) because of the sorry arse decision making skills made by those who have NO CLUE what real people need let alone what real people can afford. They rushed right in anyway full of ego and shiite and here all of us sit.... being pissed on while the administration tries to tell us it's raining.

Go sell crazy somewhere else... we're all stocked up here. 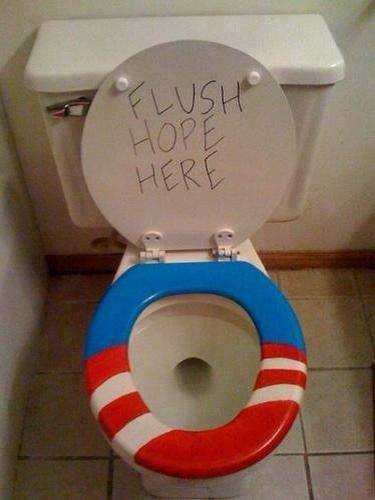 Most of us didn't have to drink anything, we were trying to get you to listen in 2007, you drank the Koolaide and you're still drinking from the same jug! How Sad Is That, with all that's been exposed about this man and his Lie's.
You know: 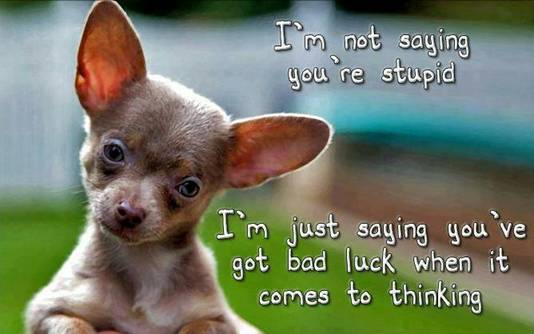 Sorry, but you need to ask your supervisor to stop by your cubicle and get you some new Pro-Obama Material.

It's cherry and tastes much better than the Pro-Obamacare crazy juice... which just tastes like cyanide juicy juice mixed with cheerwhine.

It's cherry and tastes much better than the Pro-Obamacare crazy juice... which just tastes like cyanide juicy juice mixed with cheerwhine.


Cyanide is too quick.

It's arsenic they're using.

I need to study my poisons "more better".


I had to ask, which Obama kool-aid ad got to you? This one, was it the Pretty Face?

Or this one with Obama Smiling and Pointing At YOU! 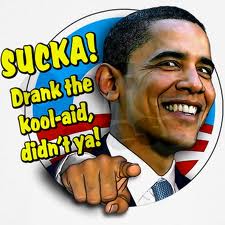 Nope, you just think the Rich and Upper Middle Class has more than you and aren't Taxed Enough, Maybe.

What ever has you still in his corner, I can't understand it. Not when we Have: 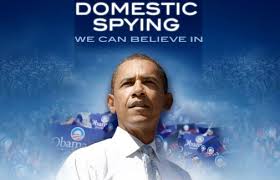 Is this the Change You wanted For America?
You have to know, Obamacare is Bad for your Health, There needs to be a Warning Label Stamped On Every Policy Issued, Expect, High Premiums, High Deductibles and Government Interference When Actual Medical Help Or Surgery is Required!


This is what drinking the Kool Aid does to you. It convinces you that Romney actually won the election and implemented Obamacare.

Next thing you know, it will be convincing them that it was Boehner telling us that Obamacare had to be passed so we could find out what was in it!

I guess I just have to repeat myself to you, you didn't listen or learn the last time I said and I quote:

You from Canada?
If so, Stay, because you didn't read the source of the OP did you, like most Liberal's, jump in accuse and rant!


I'll add you should start living in the 21 century and learn to read past threads and use Google. You might learn just How Wrong You Are and Stop Trolling.
Move out of 2012, Romney lost, Get Over it! Besides, What difference does it make to someone who lives in Canada

Robert Laszewski—a prominent consultant to health insurance companies—recently wrote in a remarkably candid blog post that, while Obamacare is almost certain to cause insurance costs to skyrocket even higher than it already has, “insurers won’t be losing a lot of sleep over it.” How can this be? Because insurance companies won’t bear the cost of their own losses—at least not more than about a quarter of them. The other three-quarters will be borne by American taxpayers.

For some reason, President Obama hasn’t talked about this particular feature of his signature legislation. Indeed, it’s bad enough that Obamacare is projected by the Congressional Budget Office to funnel $1,071,000,000,000.00 (that’s $1.071 trillion) over the next decade (2014 to 2023) from American taxpayers, through Washington, to health insurance companies. It’s even worse that Obamacare is trying to coerce Americans into buying those same insurers’ product (although there are escape routes). It’s almost unbelievable that it will also subsidize those same insurers’ losses.

It now looks like ObamaCare will hurt twice as many people as it helps — because the law isn’t nearly done with canceling people’s insurance.
The 5 million-plus Americans who’ve seen their health plans canceled thanks to ObamaCare will be joined by millions more this year — because the Affordable Care Act makes their employer-provided policies illegal, as well.


Another 25 Million
As you'll notice, if you look hard enough, you may need to take off your Obama Rose Colored Glasses, None of those sites are Fox News Sites, like you've so ignorantly claimed in the past as the only sites used.
Listen, you're from Canada and I like the Country, Many of my fellow country women and men have moved there, but you give the Average Canadian a bad name, so please stop thinking and try and learn from the People Who Actually Understand What the Man is doing to our Country. By then way, It's Obama Not Romney!
In other words, duke.


Well Like Kimmel said, it might have worked if they were not allowed to stay on their parents plan until they were 26.
ha

I need to study my poisons "more better".

Hmmm. Could someone suggest something might *possibly* come good out of all of this, without getting stoned to death?

Not to say the original implementation of Obamacare was good, or correct, or even feasible....but that we MIGHT end up with something better than what we originally had, regardless of what we have now ?