Orbs - what do you think?

posted on Jan, 14 2014 @ 12:55 AM
link
So I live by a road that was paved over a Native American burial ground, and it is said to be full of paranormal activity. A friend and I walked through the nature walk by the bay on the side of the road snapping photos. I've never been thrilled when ghost-hunters flaunt pictures of "orbs", but we caught one that was too intense not to share. I know the millions of arguments as to why orbs aren't taken that seriously (I don't take them that seriously), but I've never seen so many in pictures I've taken with similar factors (time of day/night, humidity, air clarity, etc.) Anyway, just wanted to get some feed back on orbs and this picture I snagged tonight. 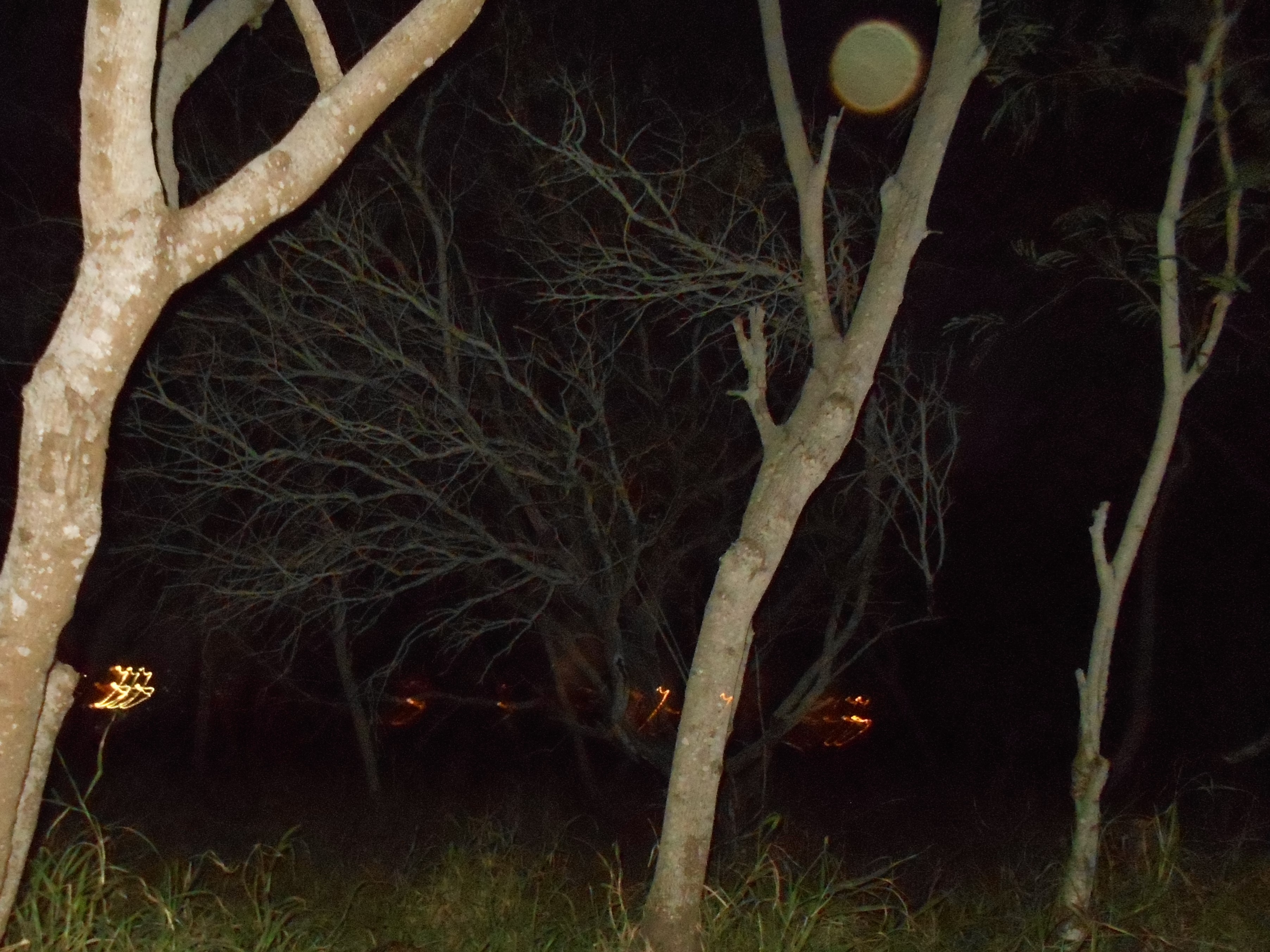 posted on Jan, 14 2014 @ 01:01 AM
link
Forget the Orb. The first thing that caught my eye was the bear/wolf? looking head in the middle of the middle tree in the background. I saw that even before I read that it was an Indian burial ground. It's staring straight out of the photo...

I really don't have an opinion on orbs and other things that visit us. I do believe something exists that we don't really know about. I also believe that sometimes those things seep through to where we can see/feel/hear them. I just don't know what they/it are or where they/it are from.

I love hearing personal experiences though.


I believe the majority of orbs captured in photographs are nothing more than dust and/or rain caught in the flash. (That's why many claim they saw nothing when they took the picture.) But I don't believe all orbs can be explained away with that. I think the image you caught is interesting as it's a singular speck, usually you'd see several but still has the possibility of being a regular particle.


I believe most of them are dust also, especially the static ones. But, with that said, I've got a photo of a single orb that traveled around my head in the blink of a camera shot...the photo shows the movement clearly. I have no idea how to attach it though, the "image from my library" link is not working.

posted on Jan, 14 2014 @ 06:48 AM
link
Dust or moisture reflecting the light from the flash. I can create orbs anytime I wish because I know the conditions that create them.

I will give "the believers" one avenue of hope : only provide "evidence" that has NOT been taken with a flash.

I like your pic. Can't say what it is, but good catch anyway, because I don't see any other "dust particles" with it.

posted on Jan, 14 2014 @ 09:00 AM
link
Seeing you asked, I will reply my understanding. Several years ago I had no opinion on orbs, but then family and friends changed all that. One quiet night my daughter wanted me to have a talk with my grandson, he was being stalked by a red orb. My daughter always knew me to be open and conversant with many unorthodox subjects, but I really had no information regarding orb.

They did get a picture of the orb going down the hallway however, on a somewhat older phone. Now skip ahead a few years to another friend. She told me of seeing orbs around old people whom were in the process of dying. She is connected to a higher spiritual level in my opinion.

Skip to another event. My brother in law came into their home and told his wife there were gremlins under her car. He is a little addled due to heavy alcohol use so she did not take him seriously. However he persisted and she went out with the camera and sure enough there were orbs bobbing about under her suv. She took a series of pictures and they came out quite well.

So at this point I had researched a great deal due to my grandson plus others experience and was convinced they were here all right, still no idea whom they were. Then one night a year ago, I had one of those nights. By that I mean, I woke with the knowledge I had been messed with while sleeping but determined not to tell my wife. I went back into the bedroom and she related how she woke in the middle of the night to see a white orb come out of her forehead. She told me she just lay there and watched it for a long time as it went over to me and hovered over my head, seemingly to do nothing until she got bored and went to the bathroom. When she came back, it was gone and she then went back to sleep. The event left us both exhausted the next day.

Not sure if this is related, but the next night I woke moaning in discomfort, rolled over and witnessed this pale, dressed in white woman hovering over me. I was immediately urged to go back to sleep and i did which was odd.

Kangaruex4Ewe
Forget the Orb. The first thing that caught my eye was the bear/wolf? looking head in the middle of the middle tree in the background. I saw that even before I read that it was an Indian burial ground. It's staring straight out of the photo...

I really don't have an opinion on orbs and other things that visit us. I do believe something exists that we don't really know about. I also believe that sometimes those things seep through to where we can see/feel/hear them. I just don't know what they/it are or where they/it are from.

I love hearing personal experiences though.


I saw the wolf too (it looks like a wolf to me, and not a bear). I was distracted by the orb so I didn't notice it at first, but when I read your post and looked again I saw it right away.

Is this where you see it? 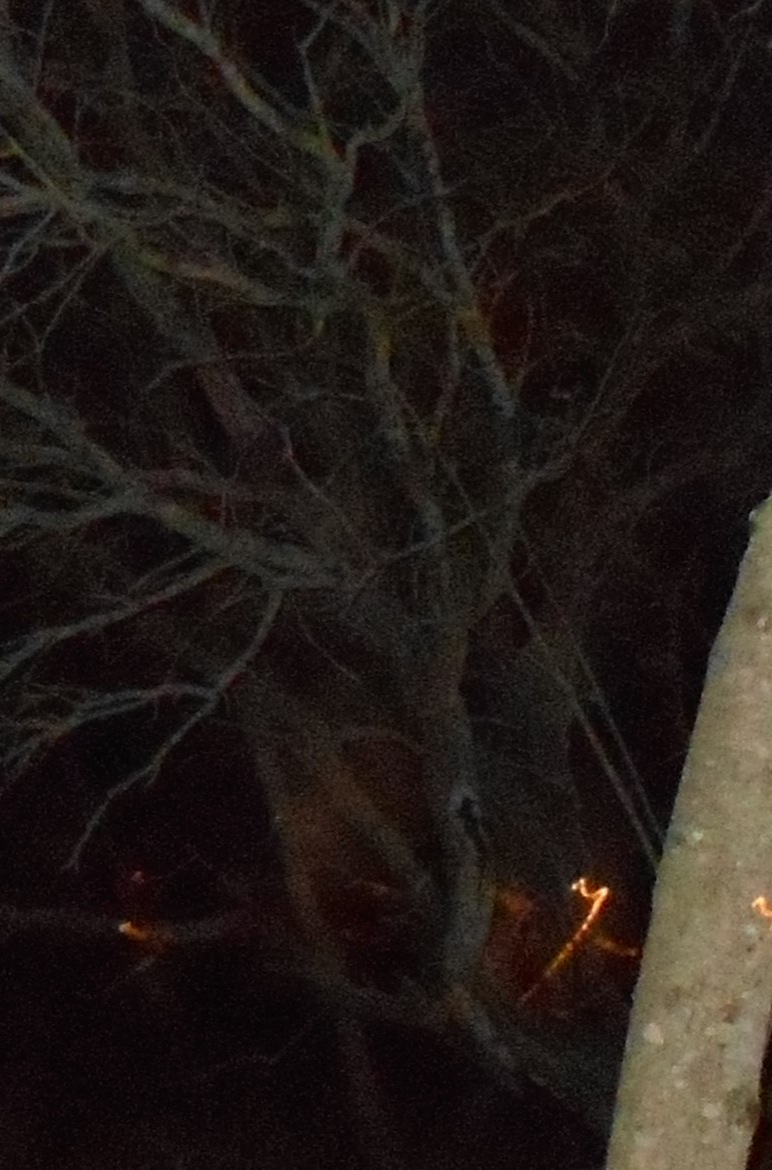 I can see the nose shape of the face easily...

I think it is just pareidolia. When I look closer at the picture, it is not a distinct wolf... just a happy (?) accident of light/shadows/branches. But it is still very eerie. So... who knows...


That's the area! I am glad I am not the only one that saw it.

I believe it is pareidolia as well, but it was still interesting. I always find it odd that some folks never see things like that while others can see something in almost everything they look at.

posted on Jan, 14 2014 @ 10:12 AM
link
My theory: Orbs are spherical, quantum-holographic, 4th dimentional, Souls. Being in a quantum state, they are beyond the confines of normal space-time. Being holographic means 1. they consist of energy and 2. they can store and access all information instaneously. Kind of like a super computer consciousness freed of the body. Also able to roam the Universe at will. The Spirit has no limitations, while the body does.


Thank you both for pointing that out!! I totally missed it when viewing the photos! Very cool! I don't know if it was me making myself excited and nervous with anxiety in this area, or if something outside of my body was causing it to react, but all in all, I'm a ghost/spirit addict

It's weird. One night on the beach with my brother and step-brother we saw a red orb come into the atmosphere as a shooting star, bounce around in the sky about 100 yards from the shore, then suddenly appear 30 feet above our heads before moving right to left and shooting inland and out of sight. This orb we saw was a real life version of the orb in your photograph, same size and color. According to your OP, it doesn't sound like you saw that orb with your own eyes and I have to wonder why. Is the orb we saw on the beach the same kind of object captured in your photo? I don't know. Maybe orbs have an invisibility cloak they can turn on and off. That's the only explanation, it seems, as to why you couldn't see the orb when you took its picture.

posted on Jan, 21 2014 @ 07:53 PM
link
I have always thought orbs to be dust or other anomalies related to the photo taking process - that said I cannot say this is what is occurring in this photo. When I was younger and living away at school deep in the mountains I remember one night my other dorm mates were awakened to see a glowing orb, large enough they claimed to be basketball sized. This orb would come our room on several occasions. I never saw it, but do believe that my fellow dorm mates did see something as they were as skeptical as I was.

Last year while in a dark room watching TV I noticed something red and glowing out of the corner of my eye, it was a fairly small orb that as soon as I turned to look at it it burst, just like a bubble I could see red sparks as it did so, it also made a sound kind of like when a light bulb dies. One of my cats jumped up around the same time and took notice as well so I don't believe it was my eyes playing tricks on me. I've seen this orb on one other occasion and again once detected it bursts.

Also a few times on early morning jaunts my son and I have seen silver orb like things in the sky. These are fairly high up and a bit larger than a balloon, like the red orb as soon as we take notice and look at them they burst. So I have 3 very different experiences with orbs and unfortunately can not tell you what they are or give a rational explanation for any of them.