All the kingdoms of the earth are owned.Bink!

posted on Jan, 13 2014 @ 02:22 PM
link
For my next trick I will simply show how all the kingdoms of the earth
are owned. By one entity. Now, that entity at the very least is comprised of
a large esoteric group or the occult. if you accept the meaning of both being the
same.

There really is no argument that it symbolizes the occult and it has thru out
history. The elite high ranking occultists know this symbology represents their
master. Here are a few examples of that symbology.

So we can easily see that this symbology is not only used time and time again thru
out the worlds nations. But also in lessor kindoms such as citys, provinces, counties,
states and even corporations. I believe this is another valuable truth the Bible
demonstrates for us.


Luke
And Jesus answered him, "It is written, 'MAN SHALL NOT LIVE ON BREAD ALONE.
'" 5And he led Him up and showed Him all the kingdoms of the world in a moment
of time. 6And the devil said to Him, "I will give You all this domain and its glory;
for it has been handed over to me, and I give it to whomever I wish.…

Here's the city flag for Nagasaki

Their horns will be like the horns of a wild ox. They will use them to push away
nations including those at the ends of the earth.

"All the kingdoms of the earth hath the Lord, the God of heaven, given me.
" And the glory of them'; "

And I stood upon the sand of the sea, and saw a beast rise up out of the sea,
having seven heads and ten horns, and upon his horns ten crowns, and upon
his heads the name of blasphemy.

2 And the beast which I saw was like unto a leopard, and his feet were as the
feet of a bear, and his mouth as the mouth of a lion: and the dragon gave him
his power, and his seat, and great authority.

The dragon (Japan) gave power to the beast (fukushima) 42 months.

You get some idea of the direction I'm heading with this.
More to come in thread.

posted on Jan, 13 2014 @ 02:28 PM
link
Cool story, Hansel... yet, an old one. Anyone can find symbolism and find relationships to everything else under the sun. I believe the Annunaki used us as slaves to mine monatomic gold for their planets dying atmosphere, because Zecharia Sitchin related Sumerian symbolism with aliens.


hmmm... I thought china owned everything

posted on Jan, 13 2014 @ 02:36 PM
link
There are secret socities and there probably always will be.
However, symbolic revelation rot is in my view poopalation.
Kingdoms are a man made concept and the only revelation about them
is that they are bollo.ks.
Keep on pooping!

hmmm... I thought china owned everything

I for one believe that the Ark of the Covenant was moved to Asia, probably China, and that who holds the Ark holds the power over the world.

I agree the concept is old. But I do provide some different direction.
this time.

posted on Jan, 13 2014 @ 02:59 PM
link
I'm not sure that four examples prove that the symbol is used "time-and-time-again throughout the world's nations" but I'm very interested to see your further evidence.

I do know that the five-pointed star is a common symbol, although not always inverted (point down) and not always scribed in a circle. Aside from the relationship to pentagons, it's also not hard to see the relationship to the human figure, standing upright, arms outstretched, legs apart. Reference Leonardo's "Vitruvian Man." Also, the human hand. Also occurring naturally in any number of flowers, on the insides of apples, starfish, etc. It is a common figure though, for certain.

The solar cross (upright cross incribed on a circle) is more common though and even more ancient than the pentagram or pentacle, as are spirals, swastikas, zig-zag lines, etc. (Reference petroglyphs.)

Could you define what you mean by "the occult"? That's pretty wide open.


Wey come on then. Spit it out.

posted on Jan, 13 2014 @ 03:27 PM
link
I assume your next posting will present the various flags of the world powers. China and U.S. carry the stars in their flag. The Soviets did too, but no longer do. If your idea is correct, all the great powers would have to carry the inverted pentagram...or at least the pentagram...or at the very least a star, right?

I think the Ark was underneath the Salomon Brothers' Building, and was moved on 9/11/01.

Ingenious mechanism. What's most ingenious about it is that there is nothing in it. It's just a goosechase.

History Of The Pentagram

First off there is this:

The earliest known use of the pentagram can be found around 3500 BC at Ur of the Chaldees in Ancient Mesopotamia. It was found here on fragments of broken pottery with some of the earliest findings of written language. In later periods of Mesopotamian art, the pentagram was used in royal inscriptions as a symbol of imperial power extending out to "the four corners of the world". The pentagram was also used by the Hebrews as a symbol of Truth and for the five books of the Pentateuch (The first five books of the Hebrew Scriptures).

Oh yea and this:

Early Christians attributed the pentagram to the Five Wounds of Christ and from then until medieval times, it was a lesser-used Christian symbol. Prior to the time of the Inquisition, there were no 'evil' associations to the pentagram. Rather it was a form that implied Truth, religious mysticism and the work of The Creator. The Emperor Constantine I, used the pentagram, together with the chi-rho symbol (a symbolic form of the cross) in his seal and amulet. However, it was the cross (a symbol of suffering) rather than the pentagram (a symbol of truth) that was used as a symbol by the Church.

But of course the RCC wasn't having any of that and did this:

During the Inquisition, The Church lapsed into a long period of torture and conducted itself in the most heinous fashion. More people were killed for being label pagan or witch that died during the Holocaust. During this time the pentagram was seen a Goat's Head or the Devil in the form of Baphomet. It was Baphomet whom the Inquisition accused the Templars of worshiping. And their order was disbanded. Many Knights of the order refused to give up their beliefs, opting to meet in secret and hide their knowledge from the public. A custom that is still practiced today.

But you know, go ahead and keep spouting the lies of the RCC that the pentagram is a symbol of evil. I wonder who is really doing God's work there?
edit on 13-1-2014 by Krazysh0t because: (no reason given)

Here's an interesting tidbit you can add Randy... 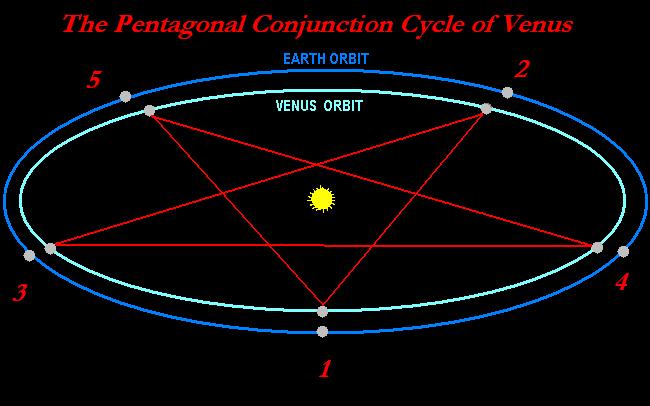 In The Da Vinci Code, Dan Brown makes a big deal of the perfect five pointed star that Venus makes in the sky. What actually happens is 13 Venus revolutions equals eight earth years equals five synodic periods, or alignments of the Earth, Venus and the Sun. It's remarkable, but not perfect. On June 8, 2004, for example, Venus passed in front of the Sun, a transit. The next one will occur June 5-6, 2012, not quite eight years later. But the next time the cycle repeats (June 3, 2020) Venus and the Sun will once again be aligned as seen from the Earth, but Venus will miss the Sun. There will not be another transit until 2117.


You'll have to go to the webpage to watch the animation of Venus path creating the pentagram. This has been known about for Millennia, from what I've read.
The (Almost) Venus-Earth Pentagram

Skyfloating
I assume your next posting will present the various flags of the world powers. China and U.S. carry the stars in their flag. The Soviets did too, but no longer do. If your idea is correct, all the great powers would have to carry the inverted pentagram...or at least the pentagram...or at the very least a star, right?

True, however that has been hashed over so much in the past
I thought not to be to redundant.

posted on Jan, 13 2014 @ 03:59 PM
link
Ok i agree with you to some degree, however to say this symbol, what ever it may be is linked to the same thing is a little narrow minded. Only because a symbol is seen in different cultures and believes does not mean it all has to do with one group.

Take the snake as an example, across the world in many different cultures it has had the meaning of re birth and the duality of the world. Along with being linked to the giving of knowlegde.

However because christian empire wanted to crush all other cultures and belief systems, and have one world wide system, they turned the snake into something evil and linked to the devil. This idea which is only voiced by a culture built upon the bible and a few others, has become the biggest meaning of the snake now.

You need to look into the history of the symbol for that culture not what may be a world wide idea.

P.S I am hoping to do a thread on the snake symbol and its history and the many idea's behind it in different cultures.

Until you can prove that statement you are not denying ignorance but embracing it. No one knows exactly what (if anyting) is in The Money Pit.

The new show The Curse of Oak Island will hopefully prove once and for all if there is something (or anything) of interest there. the rest of us don't know squat about it yet.

But you know, go ahead and keep spouting the lies of the RCC that the pentagram is a symbol of evil. I wonder who is really doing God's work there?

Of course I credit your post for the truth involved.
However there can be no doubt as to who makes use of
the five pointed star these days. Inverted in the circle
it is even referred to as a monster magnet.