posted on Jan, 13 2014 @ 10:54 AM
link
About 90 scientists and academics have co-signed a letter published in Frontiers in Human Neuroscience, that calls for more mainstream support of parapsychology. The letter stresses six points:

1. Research on parapsychological phenomena (psi) is being carried out in various accredited universities and research centers throughout the world by academics in different disciplines trained in the scientific method (e.g., circa 80 Ph.D.s have been awarded in psi-related topics in the UK in recent years). This research has continued for over a century despite the taboo against investigating the topic, almost complete lack of funding, and professional and personal attacks. The Parapsychological Association has been an affiliate of the AAAS since 1969, and more than 20 Nobel prizewinners and many other eminent scientists have supported the study of psi or even conducted research themselves.

2. Despite a negative attitude by some editors and reviewers, results supporting the validity of psi phenomena continue to be published in peer-reviewed, academic journals in relevant fields, from psychology to neuroscience to physics.

3. Increased experimental controls have not eliminated or even decreased significant support for the existence of psi phenomena, as suggested by various recent meta-analyses.

4. These meta-analyses and other studies suggest that data supportive of psi phenomena cannot reasonably be accounted for by chance or by a “file drawer” effect. Indeed, contrary to most disciplines, parapsychology journals have for decades encouraged publication of null results and of papers critical of a psi explanation. A psi trial registry has been established to improve research practice.

5. The effect sizes reported in most meta-analyses are relatively small and the phenomena cannot be produced on demand, but this also characterizes various phenomena found in other disciplines that focus on complex human behavior and performance such as psychology and medicine.

6. Although more conclusive explanations for psi phenomena await further theoretical and research development, they do not prima facie violate known laws of nature given modern theories in physics that transcend classical restrictions of time and space, combined with growing evidence for quantum effects in biological systems.

You can view the full letter, and list of co-signers, here:

A CALL FOR AN OPEN, INFORMED STUDY OF ALL ASPECTS OF CONSCIOUSNESS

posted on Jan, 13 2014 @ 11:01 AM
link
There's been plenty of studies done for decades. I'm skeptical of the claim that meta-analysis show results beyond chance. Would be open to it, but have yet to see such data.

I've seen some things in this world that make me think chi may be legit, but am not sold 100% I'm interested to see where this goes.


It's not that convincing, sorry to say:


“The recent focus on meta-analysis in parapsychology has revealed that there are small but consistently nonzero effects across studies, experimenters and laboratories . . . It may be that the nonzero effects observed in the meta-analyses can be explained by something other than ESP . . . Nonetheless, there is an anomaly that needs an explanation.”

posted on Jan, 13 2014 @ 11:39 AM
link
Sure, sure, why not? Throwing money at researchers to see if there is any objective evidence of psi effects is just as worthwhile as planning for a manned Mars mission. Besides, the remote viewers have already been to Mars plenty of times.

I think it would be nice to come up with some decent research parameters and definitions so we can get away from all the nonsense that sounds like it was taken from an 1899 seance.

Neuroscientists and psychologists need to feed their kids, too.

posted on Jan, 13 2014 @ 11:48 AM
link
I believe even if these studies produce nothing at least its scientist doing the research and not some guru named moonbeam at sunshine acres resort and metaphysical healing lodge. I'm glad that they bring up the point that people serious about this research actually encourage publishing results that may indicate things that go against their beliefs or studies. Aka responsible science.

Ever since wwII everyone has had some interest in these fields , and as equipment and models of science change perhaps someday someone will find something. It doesn't hurt to turn over every stone in my opinion.

posted on Jan, 13 2014 @ 12:54 PM
link
They have studied the hell out of this but cannot conclude anything. It does not work correctly when people are out of their natural environment well. It does not work when they are stressed or put on the spot. It is a communication between people and even other parts of nature most times. Science wants to know how it works, they cannot even figure how hive communication between bees works, it is collective consciousness and we also have it. They don't want us to know we have it though. This goes back thousands of years.

rickymouse
It does not work correctly when people are out of their natural environment well. It does not work when they are stressed or put on the spot. It is a communication between people and even other parts of nature most times.

Its also a communication between parts of yourself. If you are about to be subjected to a stressful stimulus, your body will begin to prepare for the shock a few seconds before the stimulus actually occurs. It's called presentiment and its a psychic ability that's fairly easy to produce in a lab. IIRC there have been at least 38 presentiment experiments.


I think this is a very interesting and worthy topic, I also believe that it fits well with another recently popular thread, Scientists Claim That Quantum Theory Proves Consciousness Moves To Another Universe At Death, in that both deal with phenomena which are outside the usual ken of academia and have traditionally been more 'fuzzy' in their domain.

In fact, I have found a direct connection between these two threads, from the references in the published paper:

Stuart Hammeroff is referred to by both articles.

From his personal webpage: 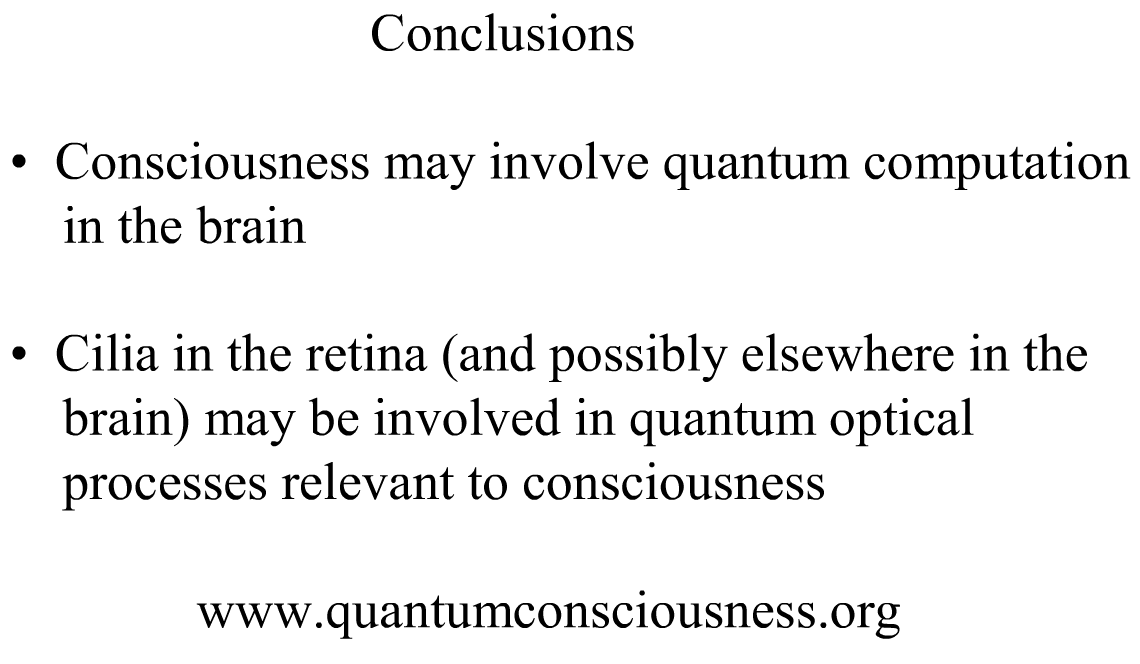 If human beings are, in effect, quantum biocomputers then we could be seeing a fusion of science and 'high strangeness' in a more mainstream manner.

Our government has long been interested in these fields and greedily kept whatever developments it has accomplished under wraps, though what has been publicly discussed is strange enough. Makes you wonder what the actual level of ability is amongst it's top operatives.


So if consciousness is "quantum computation in the brain", I wonder what mechanism causes is to focus and hone in on this reality.

Unless I am mistaken by what they mean the implications are staggering. Quantum processing is heavy duty stuff, and if true could basically open the door to having unlimited intelligence.


So if consciousness is "quantum computation in the brain", I wonder what mechanism causes is to focus and hone in on this reality.

Unless I am mistaken by what they mean the implications are staggering. Quantum processing is heavy duty stuff, and if true could basically open the door to having unlimited intelligence.


Or at least, the door to knowing everything that every other mind on the planet knows.

posted on Jan, 13 2014 @ 02:41 PM
link
There are lies, damn lies and statistics. While sceptics and believers in ESP will argue for eternity about whether meta-analyses prove its existence, a more convincing form of evidence is information ostensibly obtained paranormally about things that scientific experiments and theories only revealed many decades later, making the possibilty of cheating by the psychic impossible a priori. Here's the most spectacular example of this that you will find on the internet:
www.smphillips.8m.com...


That is very possible. Our DNA has knowledge and those little antenna networks can see more than we can. We are also in contact with microbes living within our bodies, they help us by giving us gut feelings. Without this inner communication with our cells and microbes, we have little advanced perception. When you are standing outside and your body hair starts to tingle, there is energy nearby. We get advanced warnings through many ways to avoid danger. The system we have in this country tries to dampen this so we can make good consumers and pay fines.

What if everyone never made a mistake or invested in scams, everyone would be living the good life but society would collapse. Nobody would be sick either, they would eat what they were meant to eat instead of the modified crap that is not digestible. We are gullible, we believe tptb about what is healthy, this supposedly good food chemistry dampens or overloads the signals, scrambling it.


I think I saw Dr Venkman at the annual conference of the Society for Psychical Research! I think he was hitting on chicks by the bar.


In effect, we do have unlimited intelligence. If information exists to be learned, that information is stored in the grater quantum field until we "discover" it.

That being the case, since all information that can be learned exists within the quantum field, all we have to do is find the proper resonant frequencies and that information will then be know.

Science is a process of discovering tyat which is already there but of which we are unaware.


You may have missed another thread see this video. "Science and the taboo of psi" with Dean Radin (note that science has no taboos, people that apply science have) in any case there are plenty and popular strange evidences that point that there is something there .

posted on Jan, 13 2014 @ 07:10 PM
link
The human body is a highly complex machine, capable of achieving much more than we do. Perhaps all of the phenomenon that is considered 'paranormal' is an ability that lies in us all, and has a rational, scientific explanation.

I read recently that memories may be imprinted on DNA and passed down through generations. That got me to thinking; if true, could that explain such vivid past life recall?

There is much we could learn that just might validate and help us understand PSI. I would follow such research with enthusiasm.

posted on Jan, 13 2014 @ 09:36 PM
link
As a skeptic and critical thinker who has experienced multiple premonition dreams over the years that can't be explained away, I have to be in support of these studies. I have to admit there is something to it. But that's all I can say and stay objective. And I'd bet that most of those scientists signing that letter have had their own PSI experiences which they can't explain away, either. They know there's something to it, because they've experienced it. Why else would they be so supportive of it being taken seriously when there's so little hard evidence (if any) and a lot of ridicule ahead? They've got personal experience motivation they won't talk about. Count on it.