posted on Jan, 12 2014 @ 06:24 PM
link
Looks like China is about to call the bluff on one the contested islands where the US is hoping to increase their military build-up for the so called Asian pivot. Somehow China's statement about "the battle will be restricted within the South China Sea" does not seem very comforting.

Following Japan's proclamations that it will take over another 280 'disputed ownership' islands, it appears the increasingly dis-approved of Prime Minister Shinzo Abe's path of militarism and provocation is working. As China Daily Mail reports, citing experts, China intends to take back Zhongye Island - 'illegally' occupied by the Philippines, according to the Chinese.

The Chinese navy has drawn a detailed combat plan to seize the island and the battle will be restricted within the South China Sea. Philippines military is building up on the island and the Chinese see as 'intolerable' the "arrogance" relying on US support. It seems the Obama administration may have to 'not take sides' in another fight soon. 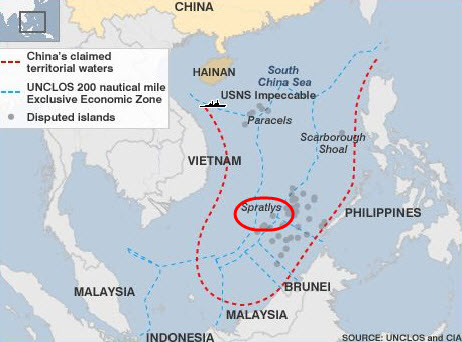 Eugenio Bito-onon Jr, mayor of the Kalayaan island group, part of the contested Spratly islands administered by the Philippines, recently confirmed that the Western Command of the Armed Forces of the Philippines has deployed new air force troops in rotation to the disputed island of Thitu, according to Jaime Laude in a report for the Manila-based Philippine Star on Jan. 5.

So are we going to have another world power face-off or is this a tempest in a teapot?
edit on 059pm0000pm62014 by Bassago because: (no reason given)


I wonder how many more games of chicken are going to see? If turns into a shooting match, there won't be anything restricted about it before to long. I would give even odds that Kim Jong-un would make a move as well.


I wonder how many more games of chicken are going to see? If turns into a shooting match, there won't be anything restricted about it before to long. I would give even odds that Kim Jong-un would make a move as well.


Yeah, I'm also having some difficulty believing this could be contained. I'd rather not even think about little Kim seeing his "opportunity" to attack South Korea while the US is tied up down south fighting with China. No way that stays localized.

There are a lot of rare earth minerals in that area. And everybody is trying to lay claim to them.

Resources always are a main reason when it comes to war. It always has and always will be. Religion, race, etc, etc are just motivators to get the masses moving.


If the US doesn't respond to a Chinese attack on Philippine territory, then we may as well close all the Embassies, shut down all the bases and aid centers alike and just withdraw to be totally isolationist. Burning THAT particular ally would be that serious, in my opinion. There are few in the world with more meaning on more levels.

Not to mention, there is a formal Mutual Aid Treaty between the nations that requires us to respond. If all that wouldn't keep the US honest, there is very recent affirmation of it all.

The world wouldn't trust on any agreement, anywhere for a generation or more if we burned that one. There would even be dereliction issues for the Executive branch, I'd think.

This may be a smack in his narcissistic face that causes him to come unglued. After all we now have the big push towards Asia and this may put a big crimp in his Philippine plans. If he doesn't stand tough with the Philippines he's going to look like a total wimp.
edit on 078pm0707pm62014 by Bassago because: (no reason given)


I agree with you.

I have a feeling that China has been biding it's time, they know that the economy in the west is failing and with theirs on the up (7.6% growth in 2013) the time may well be ripe for them to start making some strategic military moves.

The US can't afford to be deploying a military machine out to the Philippines right now.

posted on Jan, 12 2014 @ 06:53 PM
link
This is one (of many) scenarios that's been a long time in the making. The PI got a little too independent ... and now they've got superpowers bickering over their turf.

Looking at the politics, I'd guess the US will 'balk', allow China to 'take' for hidden concessions, and then disallow the sweet savor of 'the win.'


Did you ever stop to think for a moment that if China starts a restricted war (yea...that worked so well in the ME didn't it?), then we basically don't have to pay off our debt to them since they have attacked one of our allies?

If 0bama didn't react, that would make him Carter the second. I think that he is to narcisitic to want that. And if he didn't react, he would be also handing over the reigns to the GOP for the next 8-12 years and I know he doesn't want that.

Did you ever stop to think for a moment that if China starts a restricted war (yea...that worked so well in the ME didn't it?), then we basically don't have to pay off our debt to them since they have attacked one of our allies?

I see what you are saying, but I think China are playing the long game, they are a very powerful nation, if, and it's a big if at the moment, they make any moves in the Philippines then they will most certainly have taken the US debt into consideration.....and to be brutally honest, if the only contingency plan the US have taken to deter the Chinese from any military action is "if you attack one of our allies then we ain't paying our bills"......then things aren't looking too good!

posted on Jan, 12 2014 @ 07:23 PM
link
How can they say the battle will be restricted to the South China seas? Does that rule apply if China loses?


Yep. Dollars will be worthless shortly. China's given a big, shove it up your ar** America, we'll do what we like now.

Then again...being ATS and all for a good conspiracy theory?

China would be among (maybe) 2-3 in the world that would actually be capable of striking the Mainland U.S. in crippling ways but which may not even kill, if you think carefully.

Now I can see situations created, in our current condition as a nation, where priorities would suddenly be about troops back here for security and basic infrastructure support for a few months ..and then? Well, again, to entertain conspiracy for how the Chinese play Chess, Obama wouldn't much care what was happening in the West Pacific for a while. There can come a level of immediate 'uhh..this needs fixed' that would overwhelm even revenge thinking...for at least a while, anyway.

I suppose if there is truth to the story here, China would have thought some of this through well ahead of this move on the board.

May we live in interesting times, eh?


True, China does look long term while the US doesn't do so well with that. Changing leadership every four to eight years makes it kind of hard.

Maybe China is trying to draw the US out. It either knows that we can't pay the bills due anyways or are afraid of what we might do in the near future. It's always best to attack an opponent when they are weak and divided.


It means China isn't expecting the Filipino's to have help........


You do know that China's "great" economy is pretty much dependent on our economy right? In fact, I'd say that THEY are more dependent economically on us then we are on them. China really doesn't have as much debt of ours as the alternative news sites like to yell about.

The whole situation is screwed anyways. Just like Japan, if China does something, we have to back the country attacked. In this case, the Philippines. If we don't, we will lose major face in the world and could suffer diplomatically all over the world, with most of the damage occurring in the far east. If we do, then we are probably looking at the start of a major war that could easily escalate into the dreaded WWIII.

Keep in mind, once China's economy falters (they won't be able to ship all the cheaply made goods back to America if we are at war with them), and it will if they attack the Philippines, they will have to commit to the war machine and conquering resources to stay prosperous. Shortly expect wars into Japan (might as well get those islands back while they are reclaiming things). Once Japan is involved, if we've sat out until now, we'd pretty much have to get involved to continue to have any reputation on the world scene.