A satanic group unveiled designs Monday for a 7-foot-tall statue of Satan it wants to put at the Oklahoma state Capitol, where a Ten Commandments monument was placed in 2012. 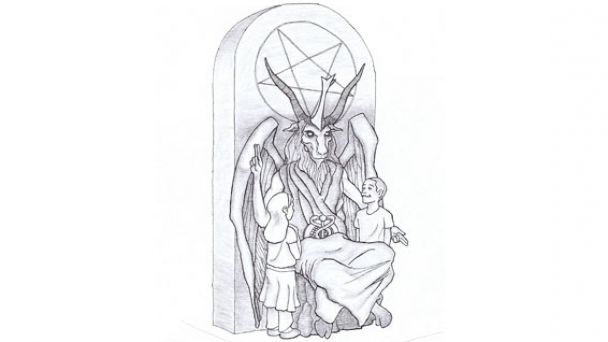 The New York-based Satanic Temple formally submitted its application to a panel that oversees the Capitol grounds, including an artist's rendering that depicts Satan as Baphomet, a goat-headed figure with horns, wings and a long beard that's often used as a symbol of the occult. In the rendering, Satan is sitting in a pentagram-adorned throne with smiling children next to him.

"The monument has been designed to reflect the views of Satanists in Oklahoma City and beyond," temple spokesman Lucien Greaves said in a statement. "The statue will also have a functional purpose as a chair where people of all ages may sit on the lap of Satan for inspiration and contemplation."

The Satanic Temple maintains that the Oklahoma Legislature's decision to authorize a privately funded Ten Commandments monument at the Capitol opened the door for its statue. The Ten Commandments monument was placed on the north steps of the building in 2012, and the Oklahoma chapter of the American Civil Liberties Union has sued to have it removed.
Similar requests for monuments have been made by a Hindu leader in Nevada, an animal rights group and the satirical Church of the Flying Spaghetti Monster.

continue to source article at abcnews.go.com


My opinion on the matter is it would be best to not have any monument but if they allow one then legally they should allow all as long as they do not depict anything illegal or immoral of course I believe some will consider anything pertaining to Satan is immoral but that really is a matter of opinion. I think they skated by on this one.

Now I wonder just how many people still think it is a good idea to place religious monuments on government property. I honestly want to see the Flying Spaghetti Monster one. No one can say that when they approved the one for the 10 Commandments they were not warned this could happen.

At least the kids are smiling next to Satan it could be so much worse. I have a feeling there will be some objections to this.

Anyway there it is and they claim:


"Satan stands as the ultimate icon for the selfless revolt against tyranny, free & rational inquiry, and the responsible pursuit of happiness," the website says.

Mods feel free to move this thread if need be I just couldn't decide what this fell under.
edit on 7-1-2014 by Grimpachi because: (no reason given)


This will probably result in the Ten Commandments being removed.

Either way, I can't believe the ten commandments were put there in 2012, I had not read that yet.


You are most likely right, and I think that may have been part of their motivation when designing the thing. I just can't imagine the people of the state allowing it.

If it does go up I wonder how long it will be till someone vandalizes it which would only fuel a political fire IMO.

When the courts approved the other and it made the news I expected something but what I read at the time described a tuned down monument of a pentagram this is something different.

Though much of religious, or specifically, Judeo-Christian imagery in public buildings has been written off by the Supreme Court as nothing but 'Ceremonial Deism,' and thus, apparenty not in Constitutonal conflict, I'm sure if this case were to go to the SCOTUS, Baphomet would not be allowed on public property, as it does not fall into this category of historical ceremonial deism, and does not apply. I know, it is a hair-splitting argument, yet we will be patient and see what happens.
edit on 7-1-2014 by kissy princess because: typo
edit on 7-1-2014 by kissy princess because: (no reason given)


I am so happy they are continuing to press this. They're making a point. These monuments don't belong there. I'd be surprised if the Christian one stays and this Baphomet one gets constructed. Part of me hopes they permit all of them so that we get to see this one as well!...


A monument of the 10 Commandments wouldn't fall under ceremonial deism either though since it clearly favors a specific religion.

Here is a bit I grabbed from an article on ceremonial deism.

Justice William Brennan, who in 1984 was the first high court justice to refer to “ceremonial deism” in a written opinion, explained that the term covers religious references that "have lost through rote repetition any significant religious content." In other words, although the expression may appear religious, it is harmless because it is understood as having no religious meaning.


Obviously the 10 Commandments very much invokes religious meaning. Instead it would apply to things like 'In God We Trust'.


I will say this if they stay and the other go up I will put them on my list of places to visit. That could become a tourist destination.


Good find, Lucid - I remember going through all this in constitutional law, but I just don't remember where the 10 commandment stood in relation to ceremonial deism, and how the hell it is constitutional to erect a stone monument of them on public property (oh wait, it's not!). I must dig up my books and get back with you. Haha, we were expected to memorize the names of these cases and their content, but that was years ago, and my memory sucks because I'm not immersed in this type of law anymore.
xox
edit on 8-1-2014 by kissy princess because: for kisses

posted on Jan, 8 2014 @ 03:18 AM
link
Would a replica of the stele the Hammurabi code is written on have caused so much discussion as the ten commandments?

HAHA that guy was funny because he was so weird. Well it says they aren't letting them put it up till some case is settled which sounds like a stall tactic on their part. If it ever goes up there I imagine it will not be long till it gets vandalised.

I agree Grim, I thought the guy was a bit overboard.

Yeah...I tend to not pay those types much attention IMO they go overboard so they can get attention even if it is in the form of negative attention. Every once in a while though I do listen to their messages because they make me feel sane.