posted on Jan, 6 2014 @ 08:38 PM
link
In case any of you aren't familiar with all the UFO stories out there, here are the top ten, according to this documentary by Unsealed Alien Files.

I'm only going to list the bottom five. You will have to watch the video to see the top five. I know... that's mean of me, right?

Now watch the video to see the top five.

Please watch the full video before commenting. There may be information contained here that you haven't heard yet on each of these cases.

posted on Jan, 6 2014 @ 08:52 PM
link
There was already a posting about this back in August. I watch this show! The Solway Firth one gives me the creeps, foreal! The first episode was about the so-called secret book The Blue Planet Project which is really interesting if you haven't already seen it.


Sorry. I didn't see this in my search. Maybe under a different title?

I think they are all interesting. Some people think the spaceman is the guys wife, but this has been debunked. Not a bee keeper either. It's a spaceman, and the men in black came to collect this guy's film, but he wouldn't give it up.


I wasn't on site in August but thanks for posting video. I love stuff like this.

Come back and offer any thoughts you have on any, if you wish.

posted on Jan, 7 2014 @ 12:10 AM
link
I had never heard of this series before but recently found it on channel called Destination America, which has a lot of paranormal shows. I actually caught this particular episode on TV less than a week ago. I thought I would enjoy it, but quickly found the show grating on my nerves. They rush through topics too quickly with little information and declare a lot of things to be proof of aliens and 100% truth with no evidence to back it up.

This list in particular is a good example. On the list of "top 10 alien encounters" is the Bermuda Triangle, specifically the infamous Flight 19 incident. Bill Birnes randomly brings up the Foo Fighters and then speculates about UFOs causing the planes to disappear. There's absolutely no evidence that aliens, Atlantis or anything other than pilot error caused that, so this incident shouldn't even be on the list IMO.

On the topic of the Solway Firth spaceman, there was actually a thread here on ATS not long ago that did a really good job of demonstrating how it could have been (and probably was) the guy's wife in the background. That picture always intrigued me and as much as I hated to admit it, the user in the thread (apologies, I can't remember who it was) convinced me that it was simply an unintended "photo bomb" that just happened to look really bizarre.

On a random note, it really bothers me how this show jacks a bunch of footage from the various History Channel UFO shows/documentaries. I really get annoyed every time I see that dramatization of Lonnie Zamora's encounter because that footage shows a disc-shaped craft (I can't recall the original documentary that said footage was from. I believe it was the one with the British guy who was proposing that what Zamora saw as a Project Silverbug craft) and Zamora did not see a flat disc. He saw an egg-shaped vehicle with a strange symbol on the side.

Overall, I feel this show does way too much proclamation with far too little evidence. Every episode I've seen feels way too rushed. They bring up points I would like them to elaborate on, but instead they jump on to the next topic before you've even had a chance to mull over what they just said. Maybe the show would be better with hour-long episodes or more focus on one topic. It feels as if they try to cram way too much info into a 20 minute program. I mean, they spent like 20 seconds talking about the #1 "alien" encounter.


Yes, I was disappointed on the short topic of the #1 encounter too. What was it? About 30 seconds?

I have to say, I think they did pretty well to get so much packed in to a half hour show.

I saw that thread with the people saying the person behind the girl was the man's wife. I don't buy that at all.
And, too, why would the men in black come to visit him and ask where the second person was, and demand the film, if it was his wife? That doesn't make any sense to me.

Thanks for your feedback.


I agree with Charizard, the whole thing was rushed and not thought out at all.

Each one of these "encounters" should have a decent amount of time allocated to explore the topic thoroughly. Roswell alone could fill up two hours easy.

Either way it made me stop thinking of food for 20 minutes while my gf cooks dinner LOL.


Ha! I did, didn't I?! LOL I hadn't even noticed that until you pointed it out.

And people wonder why I never really take to these shows?

posted on Jan, 7 2014 @ 03:12 PM
link
We did discuss this back in August as someone said. You can dig it out if you want to but that thread has had it's day now. Although I live in the UK I actually watched the North American version rather than the mashed up version served up for the UK and Ireland.

Over here the H2 History channel has been showing the series but they often take bits out and mix bits of other episodes to fit into a 1 hour slot. We also get a "British" narrator instead of the deep tones of John B. Wells. Which must be something to do with re-editing or possibly, licensing and royalties.

What I would say is this it may grab people's interest people into researching cases in more detail. But was most likely produced from a list of random clips that the program makers had bought the rights for. It suffers badly because of it and the number one case was the poorest evidence of the list and was more likely to be viral marketing for a hotel.

There are so many cases that could be in there but instead we got a hotch potch of good and bad. Even Rendlesham included the rather dubious evidence from "Binary Jim" exploring his humanity.

Here's a rather better documentary despite the fact that it gets the Lonnie Zamora Socorro UFO totally, utterly wrong:

Get it while it's available it doesn't tend to stay long.


I agree, and thank you for the link.

I'll go grab it now before it disappears.


ETA: OH YEAH!! That looks to be a great video! Thanks again!

posted on Jan, 7 2014 @ 03:28 PM
link
My favorite has always been Battle of LA just because of the huge number of people involved.

Thanks for posting it, its nice to have a reminder session, no matter how many times i hear the stories im still glued

Also how come the USA uses so many weather balloons! ;P

When I originally read the Lonnie Zamora story a long time
ago, I recall the ship being egg shaped with a strange marking too.

Thanks for the thread OP!

Charizard
I had never heard of this series before....it really bothers me how this show jacks a bunch of footage from the various History Channel UFO shows/documentaries. I really get annoyed every time I see that dramatization of Lonnie Zamora's encounter because that footage shows a disc-shaped craft (I can't recall the original documentary that said footage was from. I believe it was the one with the British guy who was proposing that what Zamora saw as a Project Silverbug craft) and Zamora did not see a flat disc. He saw an egg-shaped vehicle with a strange symbol on the side.....

Just realized that you are talking about the same documentary I posted a link to earlier. I think the documentary overall was reasonably well balanced. Yet I couldn't agree more on your criticism of the Zamora case which was hopelessly misrepresented based on the available evidence.

The two photographs of the Solway Firth spaceman showing the girl in the exact same position with nothing behind her have been Photoshopped. It's marked as "actual photos" in the video and it isn't. Overlaid spaceman photograph with claimed "actual photo" from the video with Photoshop progressive opacity applied:

It's the exact same photograph.
I wouldn't trust anything these videos say 100%. It's mostly for entertainment purposes and not factual information. Everything said needs to be thoroughly investigated and they tend to only do surface cursory investigation. Frankly, hurting this phenomenon.


But, did photo shop even exist in 1964? Home computers didn't even exist back then.
Maybe what you are seeing is the spaceman entering into our dimension through the different frames.
The space man was on the film when the man got it back from the Kodak developer, and even they said it had not been tampered with.

How do you explain this?

The show created the other two Photoshopped photos. The only other photo of the three made public by Jim Templeton, was the one with the girl sitting next to her mother in the grass. I found the third photo after a lot of searching: 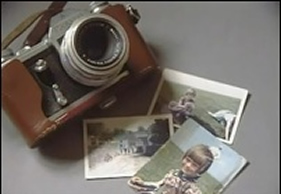 ETA: Which show lied to us? This has been all over t.v. and different documentaries for years. Who was the original show to air this?