posted on Jan, 6 2014 @ 05:34 PM
link
Well, Canada's favorite dictator experienced a slightly awkward, maybe even humiliating moment today. Two protesters were able to slip past security and get on stage behind the Prime Minister then proceed to hold up signs with anti-Harper and environmental messages.

Two protesters slipped past security and got within reach of Prime Minister Stephen Harper as he was about to begin a question-and-answer session on energy and economic issues at the Vancouver Board of Trade on Monday.

The protesters took to the small stage and stood behind Harper, with one holding a sign that read “Climate Justice Now.” A second protester held up a sign that said “The Conservatives take climate change seriously” with a line crossing out the phrase.

Security quietly removed both protesters without incident as Harper and board president Iain Black remained in their chairs on stage. Before they carried on with their agenda, Harper joked that “It wouldn’t be B.C.” without a protest. 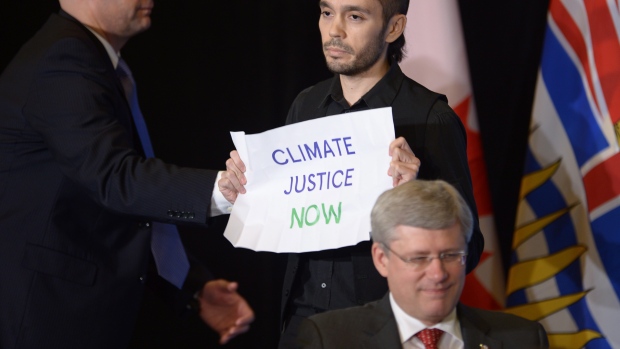 I will admit that he handled it quite well, as he is known for censoring the press so I assume that he isn't used to having his bubble intruded upon. So I applaud his ability to make a joke about it regardless of whether or not it was genuine.

Anyone that has seen my posts about Canadian politics would know that I can't stand this guy, and for good reason. He has proven to be a puppet for the international corporations while also proving that he does not care what Canadians think on various issues, many of these issues we have no voice in are environmental and resource related which all tie into our economy. In my factually based opinion this guy is nothing more than a selfish stooge who sells out to the highest bidder. 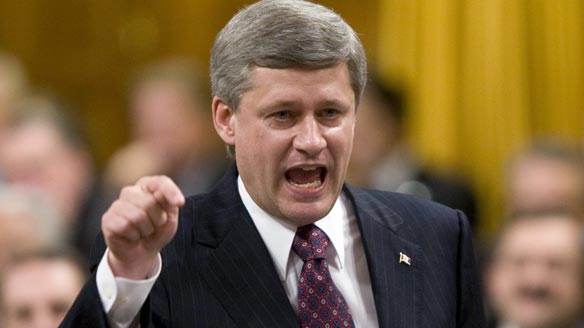 I am glad these protesters managed to get their "15 minutes of fame" as it was a brave thing to do, especially in Vancouver where the police and security detail are known to taze you to death. They were let go almost immediately and according to the news source they might not even face any charges.

I can't blame Harper for all of Canada's problems, but I can certainly blame him for making things much worse for me and pretty much everyone I have spoken to about these matters since he has "blessed" us with his leadership.
edit on 1/6/2014 by Corruption Exposed because: (no reason given)

Why does Harper even have security if they do not do their job? Seriously our PM could have been killed if they had a weapon. Why do we waste taxpayer money on Harper if they are just going to be wasted like that. Harper is a joke and thats all he will ever be.


They're just a couple of tree hugging granola eaters waiting for the bus to the EI office. Weirdos.


Yeah, now that you mention it, it does make the security detail appear to be amateurs.

Who knows, maybe they can't even stand him and let hit happen?

I know it's highly doubtful, but imagine that...maybe it was an inside job LOL!


They're just a couple of tree hugging granola eaters waiting for the bus to the EI office. Weirdos.

That's a rather bold statement without an ounce of proof to go with it.

Why would you call them tree hugging granola eaters? Just because they care about the environment and dislike our current administration does not make them Greenpeace.

Do you dismiss each person with their own opinion as EI recipients?

What do you disagree with in regards to their message?


I watched it live and laughed my head off. That'll teach him to feed his press phobia and ban the press, I thought. Oh I know his security detail will eat crow from their superiors, but the protestors were aiming for air time, not Harper himself.


I will admit that he handled it quite well, as he is known for censoring the press so I assume that he isn't used to having his bubble intruded upon. So I applaud his ability to make a joke about it regardless of whether or not it was genuine.


I agree he brushed it off well, but if anything it just shows the indifference.

Say you had a real man of the people, a leader with character. They might stop the interviewer and address the issue.

"It's obvious some would like me to address certain issues. XYZ, this is why we are doing this. Yes, you are getting screwed, but it's for the good of the country, and me!"

That right there would be entertainment, and someone you'd have to respect simply because they told the truth. But then again, that kind of thing causes rebellions.


Excuse me but that is rather rude don't you think. They are standing up for Canadians. You know not all protesters are unemployed, most work to pay the bills inorder to survive, like you and me.
Unfortunatly the people of British Columbia get screwed by the government all the time.
I am damn proud of these guys, Good on them for sticking up for the rest of us! For you see these guys, unlike us, dont just talk about things, They actually try to make a difference.

There is no need to be rude or belittle people. We should be having an intellegent conversation about the subject instead of trolling something to envoke anger in another.

A real leader would have addressed the issue but he chose to respond with a dismissive jab towards the citizens of BC as if this "should to be expected". Well damn right it is to be expected, especially in BC where his policies have made many people very unhappy.

I would have liked to have seen him squirm his way out of that one, but I doubt he possesses the ability to debate anyone on any issue unless he has his moderators controlling the flow of discussion.


I didn't hear about this until I got home from work and yeah I laughed pretty hard too.

It is very possible that they just wanted the airtime but maybe they wanted to put Harper on the hot seat for a few seconds as well. He is not very well liked and I know many people who would have participated in similar types of protest if given the chance to do so for no other reason than to help contribute in the exposure of Harper's policies.

Regrettably many people will automatically dismiss them as granola eating tree huggers on the way to the EI office because that is how they have been conditioned to react to things that do not fit within their perceived realm of normality.

All in all, it was a good prank in my opinion and kudos to those two guys.


You know what? Now that you mention that, it could have been an inside job.

The reason why I say that is because when I was younger, I was a cook at a couple different 4 and 5 star restaurants. While working at those two places I was able to cook meals for 3 Prime Ministers of Canada: Chretien, Martin and Harper. Because I was a pretty amazing cook back then they asked if they could speak to the "chef" and before I could even step anywhere near them I had to be frisked and checked for weapons before I could proceed to interact with the PM's.

Either the RCMP that protect him are slipping up or its an inside job. These guys were not really rushed off stage either, like you would expect (ie usa). Plus they were released right away too. I just happened to catch the story on GlobalBc and it seems that they got away scot free.

It is truely interesting to see how relaxed the RCMP are now compared to a few years ago.

posted on Jan, 6 2014 @ 07:42 PM
link
I don't know, those looked like semi-automatic assault signs. Armed security should have intervened.

He might have got a lot points removing them.


My "It was an inside job" comment was more of a joke than anything but in reality anything is possible and the points you have presented make that theory even more believable in my opinion.

Trust me when I say that I always keep an open mind, but I am leaning towards this one being sloppy work by the security detail.

That being said, those points you mentioned relating to your own personal experience do point towards a lack of logic in this whole scenario, if the chef had to get frisked, how did these two "nobodies" manage to get anywhere near him?

There is also always the possibility that it was staged, as in an attempt to show the "human side" of Harper (if such a thing exists).

Thanks for the great contribution.


I agree with you, Im sure they just were not on their A game today. But it is an interesting theory non the less. No worries, thats what I am here for.


Does it help to be so disregarding of people that care about our planet. Personally I wish more people where willing to stand up and be counted...

There is also always the possibility that it was staged, as in an attempt to show the "human side" of Harper (if such a thing exists).


Whaaaa? Harper an 'empath'? Nah, nada, nyet, zilch, zip, zero, naught, not a chance, nary much of a sign of that I'm afraid. Great humour though, you should write for the onion!

posted on Jan, 6 2014 @ 09:47 PM
link
What makes one sure these guys were genuine?
Could they not be part of a public relations stunt by Harper?
Never trust tv guys. Assume none of it's real.
2 guys sneaking on set? Not just 1?
What R the oddz, hmmm,

Eta: It scares me every time I see the words "Climate Justice"
Shovel more money to corporations to solve the climate problem.
Pure, evil genius.
edit on 6-1-2014 by Asktheanimals because: redunant circumnambulatory inclusivicuar are you still reading?


What are the odds indeed, no emotion, everyone calm, nothing at all real happened here and those signs tell it all.

Frankly I am not surprised, a real "Pro- Test" .

Years ago I worked as an intern at the Canada Center for Inland Waters, and while I was there 2 activists with very thinly forged Environment Canada ID badges crashed a conference the Minister of the Department of Fisheries and Oceans was having and threw a pie in her face it was hilarious to say the least.


What makes one sure these guys were genuine?
Could they not be part of a public relations stunt by Harper?
Never trust tv guys. Assume none of it's real.

We have already addressed these points but yes it definitely is a possibility, I always look at every angle of any situation.

The more I think about it though, if it were to be a PR stunt by Harper, they would not have used anything environment related as that is an issue that he distances himself from domestically and abroad and he would not risk having to address that issue among many others.

It being staged made some sense until I woke up this morning and read your comment. I highly doubt it was staged due to the simple fact that the climate/environment was mentioned as if he were to set this up, it would have been a different type of "interruption", unless there is a benefit in this that I am overlooking.