posted on Jan, 6 2014 @ 11:15 AM
link
It seems that lately the US president Barack Obama is not as favoured by the US citizens as compared to the past.
There may be issues as observed by people that concern foreign policy as well as internal policies between health and pension plans along others.
Obama' s personal afairs seem to currently not be to his best favour either.

The above are indicated in some degree by the media that deal with such manners in both the political and private aspects of the presidents life.

No matter which of the above are valid to whatever degree, or not,
amongst the multitude of afairs and issues that can be related to the US president,
all americans irrespective of belief and party are going to be called in to vote for the 2016 US presidential election.

Who are your projected candidates that will run for the 2016 US Election ?

This is not a thread that wants to brings political tension on the participants
but rather one that looks deeper into the personalities that are expected to play a key role
for the 2016 Election and the future to be.


Fun! I was hoping somebody would start talking 2016 pretty soon.

My projection is that we will see a record-breaking turn-out for 3rd-party voters. The GOP is falling apart and may not even exist by then (not in a recognizable form, anyway) and the DNC will be bitter about Obama's cookie-cutter style that followed much of Bush's logic.

I see there being, for the first time ever, an actual chance for a Libertarian or Green Party (etc) candidate to pull some real weight. I'm pretty sure this election will mark either the complete downfall of the two-party system or at least the beginning of the paradigm shift into a more direct democratic process.

I'm looking forward to this next cycle like none before it. 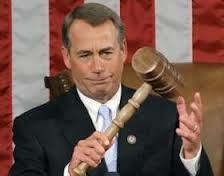 Hmmmm this is an interesting first post indeed.
The 2 party system has been the norm for most of de.ocratic countries in the last decades.

I am now not so sure what has been so democratic about it all whith the global crisis and globalisation. To my mind the last part of my previous sentence is still the main trend, one that will be hard to be avoided.

I gather that this next election over in my country may as well be the first one giving the chance to a third or new party to hop in for the presidency slbeit i see still a problem.

In my case i am not convinced that this new strong trending and expected to win party is anything more but the natural progression of people manipulation as compared to the hope of the people which seek for a saviour of their strugles.

I have recently grown to be overpesimistic when politicians and large organisation companies are concerned. Lets hope i am wrong.

On this last remark of mine there is a new interesting twist thay may be of interest in the discussion.

Candidate propability projection versus candidate effectiveness as compared to the expectations of the nations people.
After all this is what is being missed lately,
a candidate that will have the masses happy while doing what is right.


I've seen the GOP strengthening, personally - I think the next leader will probably be Bohner, but he doesn't have any official paperwork out or anything.
edit on 06pmMon, 06 Jan 2014 12:06:47 -0600kbpmkAmerica/Chicago by darkbake because: (no reason given)

Howevwr this is of not much scope if practiced in this way.

I may as well upload 100 photos
Making my question clear for you is not whom you would like but rather who you would expect to be the next winning president, that is ussualy to be a single personality. Naturaly your desired and expected president to be may as well be the dame personality

posted on Jan, 6 2014 @ 10:38 PM
link
The easy pick here is Clinton v. Christie, with Clinton winning. I don't like any of the potential candidates much, and some of the other possible contenders will be O'Malley, Patrick, Cuomo for the Dems and Paul, Ryan, Huntsmen, Carson, Perry, Rubio... probably missing a few for the Republicans it's a big wide open field.

That's all assuming a continuation of current political trends, which may be wrong. As a previous post said, I could see a rise in movements against the two parties. I'd highly doubt that it results in a successful presidential candidate, and I really hope some of these movements aren't the typical explosion flame out. People get energized and think they can change the world in the month before the election. Doesn't work like that, it needs to be a sustained and discipline effort that focuses as much on congress and state legislatures as it does POTUS.

I think Democrats will maintain a majority in the Senate after November, probably losing 4 or 5 seats to make it 52-48 or so. Which means politics will basically function in the same way they have for the past two years.


How will it play out? Might be an unpopular forecast, and one I'm not really happy with either. But the way I see it is that Obama has already bottomed out and trends up from here, the health care law covers a lot of people and Dems can make a case for a successful step in reform. The economy basically mimics the last 3 years with slow improvements in unemployment and GDP, with a market slump mixed in (probably this year) that doesn't cripple anything. Deficits go down, maybe even a balanced budget in 15-16.

All of that means Obama leaves on a high note and Clinton can exploit the trend of social liberalism and favorable demographics for the Democratic party. She wins in a very similar fashion to the 2012 race. I mean, Christies is an alright Governor but I don't see him exciting people as a President. The Republican primary will be brutal too and will probably hurt their candidate, and the fractured party is not healing by 2016.


With all of that said, people are going to get sick of Democrats eventually. If not in Clinton's first term, then her second. I do think there will be some anti-party groundswell in 2016 but not enough to be very impactful. If not in her first term, then in her second is when we'll see a real movement against the establishment. 2020-2024. These things take a lot of time and what is currently happening doesn't project to any type of new style in politics by 2016. But the seed is there, and when people start understanding that there are alternatives to the government programs when it comes to health care, poverty, and social issues - it'll burst.

Another thing is that Hillary isn't going to want to be just another president. She'll pursue some serious reforms in the way of liberal Democrats- maybe single payer health care. This will cause blow back and fuel the fire for a new movement. I think it will be a mix that unites anti-capitalists with anti-government people, sort of an all encompassing local self sufficiency. Put Occupy and the Tea Party in a blender. The only working alternative to big government that solves the problems that people care about requires a cultural movement toward more community work to pick of the slack from cutting tax funded programs. We'll take another market hit sometime 2016-2020, too many structural flaws in the economy, too many global vulnerabilities. My bet is social instability in China leads to a contraction there, which hits us. All fueling the flame of the need to produce locally.

Predictions are all nonsense.
edit on 6-1-2014 by SkullofThought because: (no reason given)


I call this an analytical and well structured post which i would consider very closely as being a projection of things to come with high prolability at that.

I also agree that predictions are all nonsense. Specially so when considering various aditional geopolitical and environmental (between others) factors that can easily cause big shifts in peoples mentality and decision making.
Myself i consider that last part a key factor why the people in charge are allthemore hitting heavier in the people manipulation and control aspect of things.

I find your post good enough for me to go over it a couple more times in the next days so that i can view its variables and outcomes in further depth. Starred.

At this point i will disclose the inspiration of this thread and how i decided to realise it.

The other day i had a discussion with my father on the latest Obama-Michelle fallout while they were on the new for the known story. I attested that he indeed as mentioned here has bottomed out and that these guys (genaraly speaking about presidents/prime ministers etc) act like children at the time they are also supposed to be world leaders.
(World leading to me is a fact for whichever country but more so for a US or Russian, German, French etc etc)
As my father laughed in entertainment on my remark that they are like irresponsible children, yet they are (supposed to be?) the leaders that form our world, it occured to me to listen to his view on who the next US president will be.

His answer was quite surprising to me, especially so when i still haven t had the chance to discuss with him on what basis he has allready drawn such a firm conclusion as he has.

To cut a long story short i was struck to the fact that my father informed me on a very natural and no nonsense way without the slightest shade of doubt in his eyes that the next president of the US will be Hillary Clinton.

Such was his certainty that on my question on why he just replied: You will see.

I find it highly unlikely my father being a secret agent of whatever inteligence or secret agency but he sure does study a thing or two on facts around as while wise and educated. I gather he also has his preffered/filtered sources of info on the world which is backed by a lot of experience at his age.

My mind did a spin or two and i though wow that is something. Personally i might preffer a guy like Ron Paul irrespective of party being a leader but i do not see much chance in that. Then i searched on articles on which people may run for the ellection and i saw Rand Paul (i initially confused him with Ron Paul which made me look a bit deeper into this all) between others and the forementioned in another post.

At this point i decided that this exercise was worthwhile a thread, so here we go.

Irrespective of how this thread occured to me i find it a subject of interest as we race into the future in times of lightning speed of change.

edit on 7/1/2014 by GEORGETHEGREEK because: some spelling mistypes/mistakes. Not all i guess... On mobile as usual...

I don't want any of those as Presidents, ha - I was just under the impression that a Republican might win because the race is usually pretty close and Obama and the Democrats have been receiving a lot of bad press, also there has been a marked increase in irrational thinking as of late, which usually leads to Republican wins I would reckon.