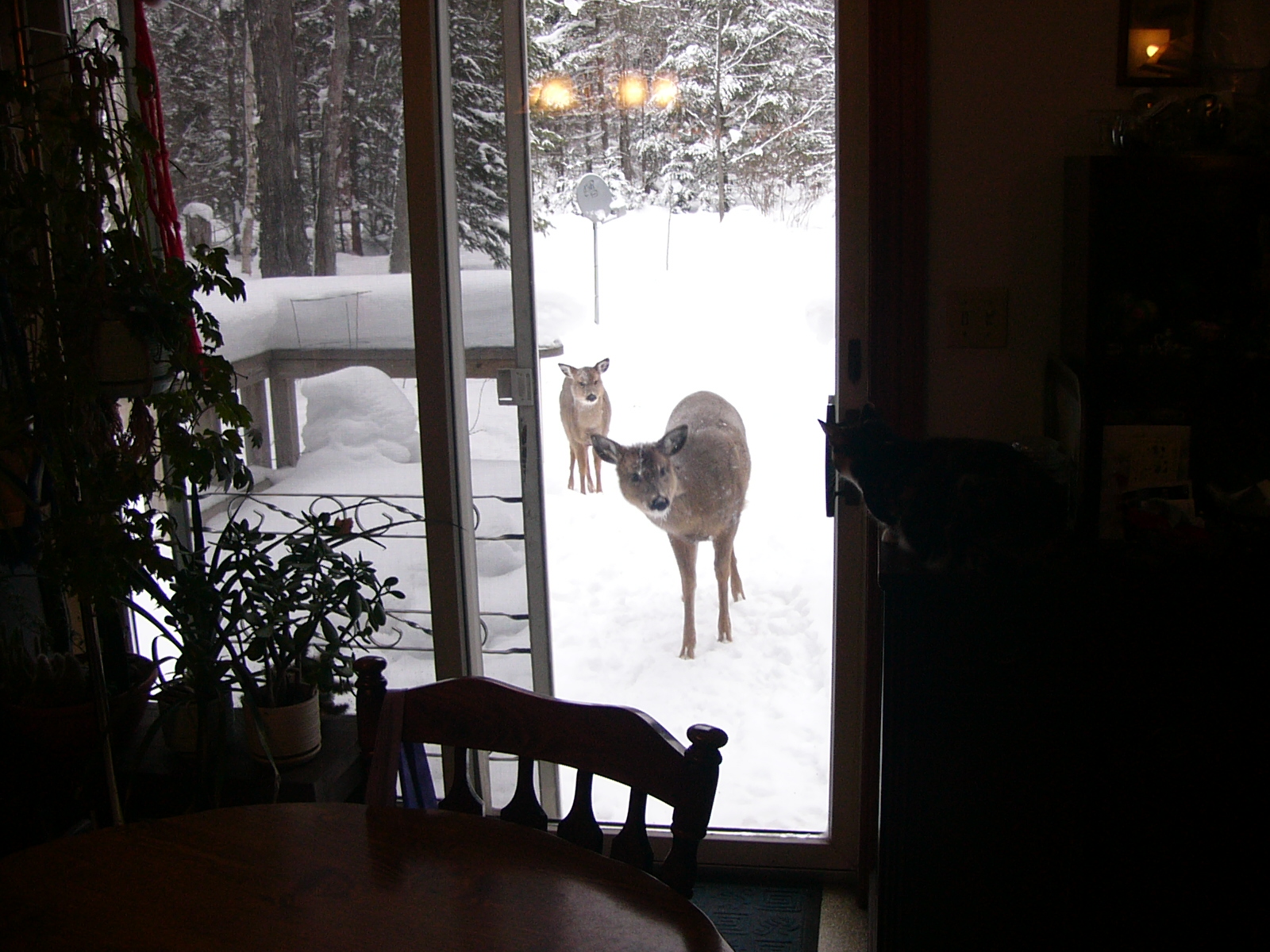 posted on Jan, 3 2014 @ 09:40 AM
link
We know your baking fresh bread, we'll wait till it's done. Four pounds of spuds, three carrots, and two hot dog buns should keep us till lunchtime. 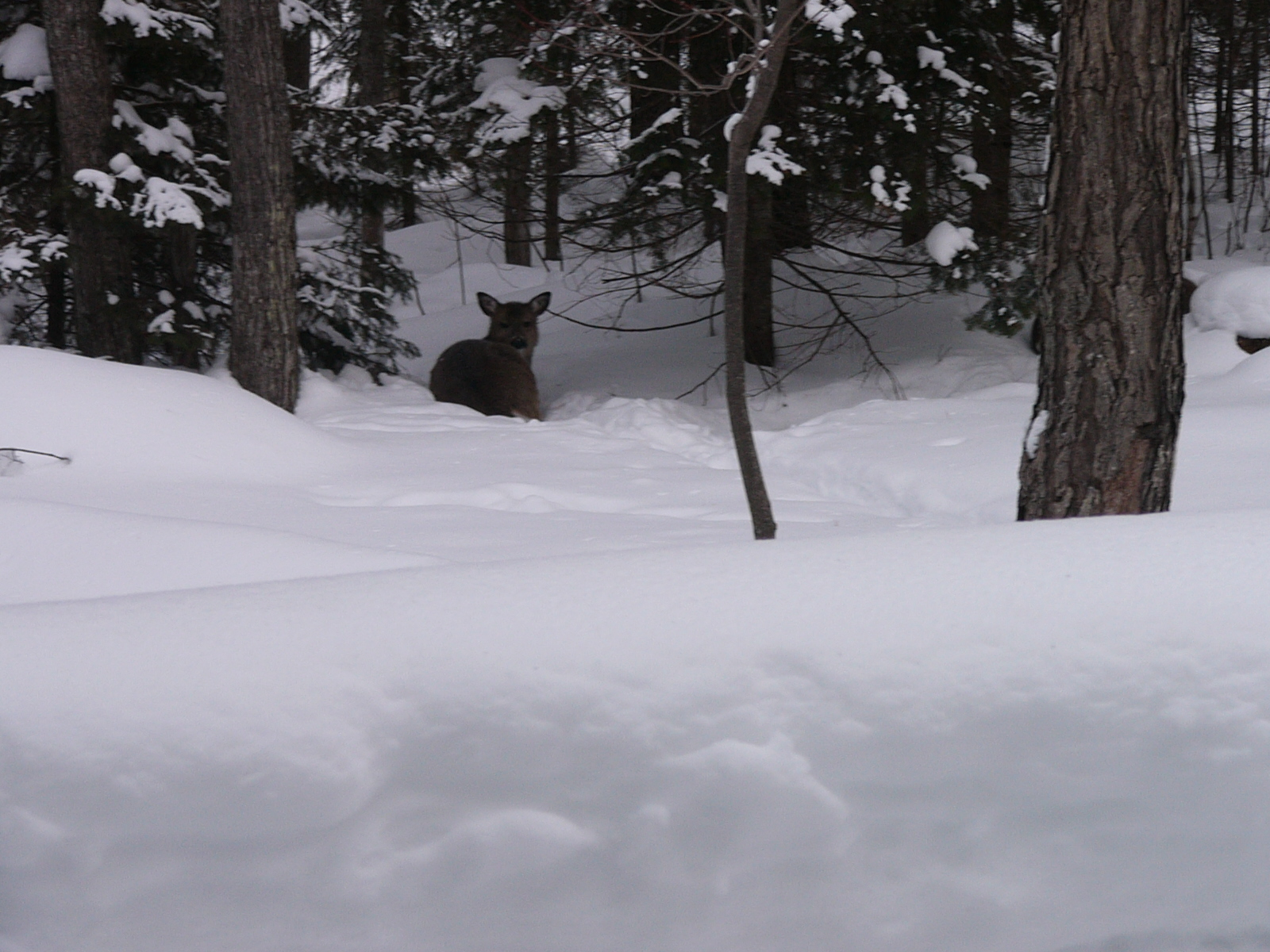 
With as cold as it is today, maybe they just want a warm spot by the fire!
Is that your back porch?

That is exactly why I love living in the country. Unexpected visitors!

rickymouse
I'll have an order of potato wedges and maybe some carrots and a hard roll.

The one on the right is totally trying to cop a look into your kitchen there, RickyMouse


Nice! IMO, two good lunch options are 1.) deer salami (grandma used to make it and was awesome), and 2.) pulled-venison barbecue sandwiches (I've never had a pork or beef variety that could beat it). Since it's cold out some ground venison chili would be tasty. Hmmm...I do have some burger in the freezer...I know what we're having for dinner tonight!


Yeah, I always worry that the deer may twist their legs on the steps. I need to put backs on the steps so they won't get hurt. These two deer, sister and brother, got left here by their mother who went to the wintering area about a half mile away. They come here in the morning and eat, sleep in two different spots, eat again, and then they go see what the neighbors have. They usually come back in the evening. These two were born this spring.

As soon as I opened the door to feed them today, the buck jumped up on the deck. I held out a potato but he wouldn't take it out of my hand so I tossed it down. As I threw potatoes over his head to the doe, he would jerk and finally he went down. I try to not feed them too much bread, they get fat in the gut. We give them oiled sunflower seeds once in a while, it helps with keeping them warm I read. If people feed the deer grains they should incorporate a little seeds so they do not get niacin deficient. Potatoes contain niacin that is not bound. but not enough oils.

I'm going to try cooking them some special bread. I have to do more research though. Too much bread can cause an imbalance of microbes in the ruman and since there is less other grasses in the environment now, that could be bad. Corn is bad for deer but a little won't hurt, I prefer not to feed them corn at all. I heard the DNR gave a lot of corn to the deer in the spring and a lot of them died, the niacin in corn is tightly bound. It's not good for any animal to eat too many grains, they get impacted.

posted on Jan, 3 2014 @ 10:08 AM
link
They come onto the deck and watch TV sometimes too. They will stare at the TV for an hour. The doe was watching mister Ed and Bananza the other night. Stood there for an hour with it's nose close to the glass. I suppose it is warmer by the patio door, maybe I should put an artificial christmas tree out there so they can sleep next to the door and watch tv.


Awe!!! I'd love to see this out my back door, both the deer AND snow! You are lucky!

I'd have to cook them up something of course

Then in a few years they get fattened up and will make for some good meals in the future, in case of Zombie attack.