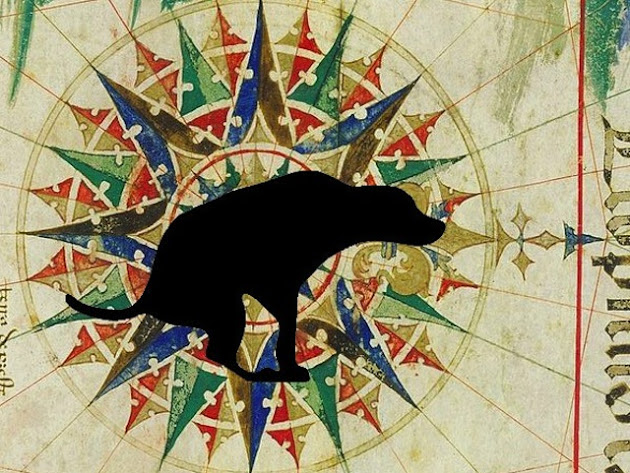 Well, next time you see your dog doing the age old spinning ritual, you know what's he/she is really doing :-)


Introduction
Several mammalian species spontaneously align their body axis with respect to the Earth's magnetic field (MF) lines in diverse behavioral contexts. Magnetic alignment is a suitable paradigm to scan for the occurrence of magnetosensitivity across animal taxa with the heuristic potential to contribute to the understanding of the mechanism of magnetoreception and identify further functions of magnetosensation apart from navigation. With this in mind we searched for signs of magnetic alignment in dogs. We measured the direction of the body axis in 70 dogs of 37 breeds during defecation (1,893 observations) and urination (5,582 observations) over a two-year period. After complete sampling, we sorted the data according to the geomagnetic conditions prevailing during the respective sampling periods. Relative declination and intensity changes of the MF during the respective dog walks were calculated from daily magnetograms. Directional preferences of dogs under different MF conditions were analyzed and tested by means of circular statistics.

Results
Dogs preferred to excrete with the body being aligned along the North-south axis under calm MF conditions. This directional behavior was abolished under Unstable MF. The best predictor of the behavioral switch was the rate of change in declination, i.e., polar orientation of the MF.

But for whatever its worth, all that spinning is far from arbitrary. What dog owners witness is a small and furry version of the aurora borealis and a link between species and environment that’s as holistic and beautiful as a dog pooping can be. A team of Czech and German researchers found that dogs actually align themselves with the Earth’s magnetic field when they poop.

Proving at least that they’re really devoted to their work, the researchers measured the direction of the body axis of 70 dogs from 37 breeds during 1,893 defecations and 5,582 urinations over the course of two years, and found that dogs “prefer to excrete with the body being aligned along the North-south axis under calm magnetic field conditions.” They fittingly published their results in the journal Frontiers in Zoology.

There must be a reason the species developed this in the long run, or a residual past benefit of some kind...maybe a predator would be less likely to smell them?


My ritual prior to defecations is reading.

I prefer Reader's Digest but Sports Illustrated works too.

FatherStacks
+19 more
posted on Jan, 2 2014 @ 11:18 AM
link
I guess I owe my labrador an apology. Here I thought she was just too good to crap in the same place twice, when in reality she was aligning with the poles. Who would've thought a dog taking a dump could be so fascinating? The compass is going with me on the next walk.


We have people dying of starvation or people who can't afford to get a simple basic life saving shot, but we can spend countless dollars following dogs around while they poop?

I hate this planet.


We have people dying of starvation or people who can't afford to get a simple basic life saving shot, but we can spend countless dollars following dogs around while they poop?

I hate this planet.

With all due respect, I understand your point on wasted money and how it could be better spent. I'm with you on it. But not all scientific studies have multi-million dollar budgets...looking at the original publication all they used were some dogs, a hand-held compass and some dog #.


This is a false dichotomy. I could easily say "We have people dying of starvation or people who can't afford to get a simple basic life saving shot, but we can spend countless hours posting on a conspiracy site?". Scientific research isn't some singular entity where time spent in one area takes away from time spent in an other. People focus their research is different areas, it's not like these researchers would be curing cancer if they weren't conducting this study.


Who fed those 70 dogs for this 2-year experiment/observation? Who housed them? Who paid to feed and house them?

Who paid for the people to follow said dogs around?

Plus, what relevance does this have on ANYTHING in life? Is it going to save someone's life in the future? Are we going to find alternate fuel from this? Etc.

posted on Jan, 2 2014 @ 11:42 AM
link
Weirdly enough, my dog faced north this morning while pooping.
My Lab. I don't know about the Shihtzu, but he thinks he's half cat, so he gets to be unobserved.

My new obsession. Watching what direction my Lab is facing while doing his business.....


My ritual prior to defecations is reading.

I prefer Reader's Digest but Sports Illustrated works too.

Good call on the grist-- but mine's pain because she's Bogarting the lavatory doing her makeup. Almost like resturant magic, when you light up the food comes.
Could it be the alignment is more prevalent with a high-iron variety of kibble? Sorry Beez, I couldn't help it wherever you are.

posted on Jan, 2 2014 @ 11:44 AM
link
I must have had a dumb dog. He seemed to always be looking towards me or whoever was there when he was dumping a crap. Maybe it was his way of saying people get easily polarized. Or, maybe we kicked him in the butt for pooping in the wrong place and he learned to keep his butt away.

So are most toilets in this country facing north and south? Do people prefer this direction also. I have to spin around before sitting on the toilet and often make another spin to identify where the toilet paper and magazines are.

What happens if there is a Natural Magnetic Geological anomaly in the area? Does the poor constipated dog just continually spin without ever copping a squat?

hopefully things will be a bit less messy now ... he almost seems to 'refuse' to get it all in the tray, and kinda just lands awkwardly, at the outside edge, on my carpet ..

he is trying for the tray .. but somehow, his mind doesnt allow him to want to go in properly .. and as long as his 2 front paws are on the tray, he thinks thats close enough

would be amazin if this made it more appealing for him ...


they say during the transition, there will likely be several poles, around the globe .. almost chaotic like .. some nasa pics of the suns recent magnetic pole flip seems to back that up ...

the planets dogs will be goin mental trying to do a decent bit of business ... wont know what way to turn


honest reply .. am certain the dog will eventuall just do an 'uncomfortable' poo ... i have no scientific data to back that up .. but i bet am right ..

posted on Jan, 2 2014 @ 11:58 AM
link
apolgies for bombarding with all these posts .. but this soo reminds me of when some guy clocked that the majority of cows on teh google earth imagery, lie down, or sleep aligned to teh earths magnetic pole ..

that article says 'while grazing' .. but am sure i could find one that states, while lieing down , or sleeping
edit on 2-1-2014 by Segenam because: wheeeeEEEEeeeee......


I wonder what if humans would do the same, lol ...I mean, we´d need a portable toilet
edit on 2-1-2014 by CosmicDude because: (no reason given)