I saw this story about a Crop Circle discovered in Salinas, California on my Bing news feed: "Alien or YouTubian? Intricate crop circle appears in California

Here's an excerpt from that article.

An aerial photographer spotted the giant crop circle in Salinas, Calif., from above on Monday. Theories are cropping up to explain an intricate circular pattern discovered in a field of grass in Chualar, California field. KSBW's Tom Miller reports.

“We were on a photo flight this morning and came across it," aerial photographer Julie Belanger told NBC News. "It was so unique in the middle of a field.”

Onlookers on the ground had to make do with climbing on their trucks on an adjacent street to try and get a better view, NBC affiliate KSBW reported. 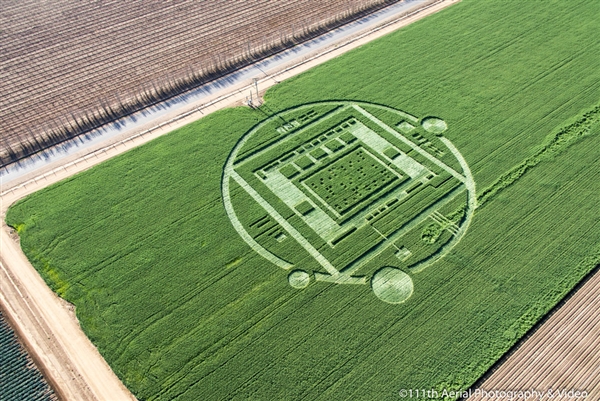 Now I'm not a crop circle enthusiast, however it has been an interesting day for "Alien activity". This story really caught my attention for two reasons; 1st because crop circles don't usually make MSM headlines (not that Bing is on par with NBC, CNN, BBC, etc.) and 2nd because we watched 2 televised parades today, "Rose Parade" in Pasadena, CA and the "Mummer's Parade" in Philadelphia, PA. BOTH had alien activity featured in them, The Rose Parade had a float called "Space Vacation" and it featured a family vacationing in outer space and having their picture taken by an alien. The Mummer's Parade featured one of their "Fancy's" I think it's called (a musical skit) which seemed to be an alien invasion of sorts, complete with a UFO and a green Overlord type figure.

Just strange in general, even made my hubby sit up and take notice. I could not find actual pictures of either of these events... I'm guessing it's too soon. However I did manage to dig up an image of an artist's rendering of the concept for the Rose Parade float. 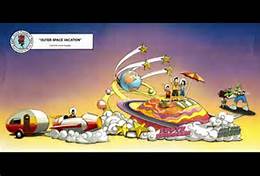 So what do you all make of all this "in your face" alien activity? Could 2014 finally be the year of disclosure?

Edit: Guess I should add that there was an intent for a sarcastic undertone in this thread, mut've got lost in translation somewhere. If you are familiar with my usual activity on here, you would know that I have very little participation in this particular forum. Oh well, posting is a gamble around here... Happy New Year anyway

misscurious
I think your right.. an alien themed float in a parade.. disclosure must be coming soon..

If that's the case, then 30 years ago disclosure was right around the corner, because the closing ceremonies of the 1984 Los Angeles Olympic games featured flying saucers.


Well the "search" needs work because I put in the name of the town, the date and even the news station that did the flyover... nothing.

misscurious
I think your right.. an alien themed float in a parade.. disclosure must be coming soon..

I was in NO way implying disclosure would come because of the themes in the parades. Simply that we are seeing it on a regular enough basis and comfortable enough with the subject matter for it to be featured in internationally televised parades that millions of people watch as a tradition on New Year's day!

Sheesh, you guys are snarky lol!

It looks like a computer chip at first glance.
The spheres on the outside that appear to go from small to large then small again could be symbolizing what this chip does in terms of technology. Machines get smaller, take over jobs, the population shrinks as the working class is no longer a requirement to the function of the capital system.
Or it could be something completely unrelated lol. Either way nice pic.


It does, and that's a common theme theory among witnesses and commentors. There are a few youtube videos about this circle, including the one linked in the article.

Not sure I believe this one is real. I came to that conclusion shortly after watching this video. 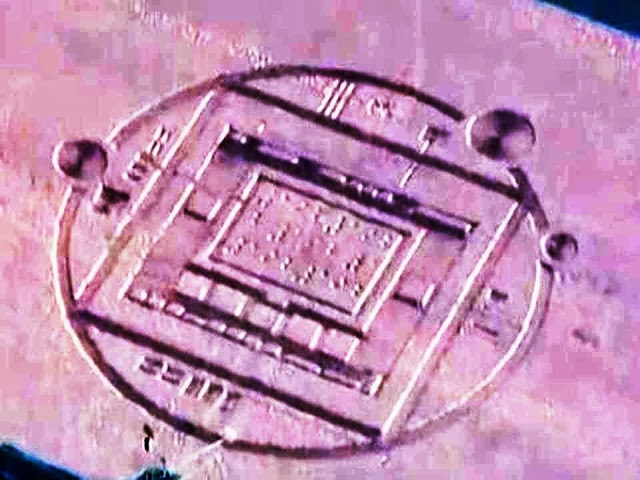 My gut tells me to pay attention to the dots in the center block area. I'm not writing this in stone yet as a hoak. Who would tell us anyway if this was the real deal?


You may have a point, nobody would tell us anything. And I'm also starting to get a little queasy feeling in my stomach the more I look into this.


Yeah, I posted that video in a reply. But, they didn't report it, the news helicopter was the first to report on it and they did include a link to the video by "Can't Say" in the article.

Now I found a thread on here about Sydney, Australia's NYE firework and light show featuring the "all seeing eye" as well as aliens and UFOs.
All Seeing Eye in Sydney NYE Fireworks

Something's going on here, doesn't take a whole lot of brain cells to connect these dots! This is going to be an interesting year!

To me, when I first saw the CC this morning, looks like an aerial view of a classified or well guarded building not unlike the NSA facility in Utah. I think I've seen this view before, I'll have to look through the archives to jog my memory.

Had a brain rush that, try to stay with me for a second, will sound crazy but makes sense to me. That crop circles are a by product of quantum FTL communication. The messages are sent and received, but, as a manifestation of quantum FTL communication, a crop circle is generated with some vestige of the communication sent. As an example, say for instance, a message is sent from far away about UFOs. The message is received about UFOs but as a quantum consequence, an alien head is manifested as a crop circle.


WOW, thanks for that contribution! I have next to no knowledge in this area, as I said this isn't really my neck of the ATS woods lol.

So what do you all make of all this "in your face" alien activity?

Interest in alien imagery has had spikes or peaks in just about every decade since the 1940s. There's nothing new about that.

One thing that I've noticed is that it tends to coincide with things such as space exploration or very popular space themed sci-fi TV shows/movies.

Right now you have one pop star who claims to be an alien as well so is it a lot to think that stuff such as all the habitable exoplanet discoveries being made, the realization that the basic ingredients for life like water are pretty much everywhere in the universe in some form or another and our own exploration of the planet Mars would lead to more pop-culture references to aliens?

Could 2014 finally be the year of disclosure?

If there was something to disclose (which I very much doubt) then 2014 would be no different than any other year.

What you will get this year are more reports of habitable exoplanets, more water worlds, more planets whose atmosphere's have been roughly analyzed, perhaps showing that our planet is a little less of the "special case" many thought it to be.

That's about it at least until 2018-19 or so when we may actually find the signatures of life on a far world with the James Webb Space Telescope. (Assuming it is operational by then).

As for crop circles like this one. They are certain hoaxes as this one will be revealed to be any day now.

Salinas, California is not far from the SETI Institute. If any aliens made such a crop circle for "First Contact" they're pretty stupid.


I did a search and three pop starts are indicated, Britney Spears, Katy Perry and Lady GaGa. Justin Bieber got honorable mention. Probably someone else.

My gut tells me to pay attention to the dots in the center block area. I'm not writing this in stone yet as a hoak. Who would tell us anyway if this was the real deal?