page: 1
35
<<   2 >>
log in
join
share:
ValerieDivusen
+15 more
posted on Jan, 1 2014 @ 10:15 AM
link
Okay ATS, I was hoping you might be interested in helping me solve a somewhat intriguing (to me at least) mystery. I have tried to find answers on my own and have failed so far. I was in Paris, France last year, around February, and I was homeless. It was cold, which usually meant you had to keep moving at night to stay warm. This resulted in a LOT of walking, and a strange discovery...

Luggage. I'm talking airport luggage, giant rolly-bags...scattered everywhere! I found this phenomenon in multiple locations, but all of them were near to or within the banlieues. I'm not talking several, or even a dozen, or even a couple dozen bags. When I say a LOT, I mean it looked like multiple airliners had just dumped their entire cargo bay in one location (usually a couple streets, up to about a block).

Even more strange though, is that there is an entire looting community that is aware of this phenomenon that comes out at night and picks these sites clean by morning, then sells the stuff on street markets the next day. These luggage bags start out completely packed full, too. There are clothes, shoes, iPods, postcards, letters to family and friends, etc. I'm not exaggerating when I say it literally looked like these bags were just jettisoned from a commercial airliner.

So the mystery is, where is all this stuff coming from? Who did it belong to? I spent weeks in Paris living on the streets, often times awake for days and nights simultaneously because it was too cold to sleep, and not once could I find any indication of where this luggage was coming from. None of the looters I talked to knew, and there's nothing about it on the internet (that I could find). I found about three or four different sites but none of them were repeat locations, at least not while I was there.

Does anybody here know anything about this? I am at a loss, but I am fascinated.

posted on Jan, 1 2014 @ 10:44 AM
link
I'm not sure of this but, I have heard that when airliners come in for a landing they often dump excess fuel to be lighter upon landing. Maybe they hit the cargo doors instead of the fuel dump door?


Haha, that would explain it, but I don't think that kind of mistake is too likely. And if it did happen, I think we'd be seeing some outraged passengers.

That's another odd thing to me. All this stuff belongs to someone, so why are we not hearing any kind of unified complaints? I mean, I'm assuming the stuff must have come from the same or similar locations.

I should have kept some of the letters and postcards and tried to find the owners. What if the people are missing too? That would explain why they're not making any noise about their stuff.

Seriously, the whole situation is just so bizarre.

posted on Jan, 1 2014 @ 11:45 AM
link
Where are the people that belong to the luggage? And why don't the 'non-homeless' of Paris notice all this luggage lying around and question it? And why are they not immediately surrounded with security people wondering if it's bombs left to go off?

Fascinating, OP. If anywhere near true, this is very disturbing.

I hope your living situation is better now...

Very strange. It reminds me of the Holocaust. When the Jews were rounded up and everything they had was left behind.

posted on Jan, 1 2014 @ 12:48 PM
link
It sounds weird, the fact that you said they were scattered rather than piles makes it really unusual.

Would the bags be taken too? in other words surely looters would take the lot and not leave bags behind..

And was any of the luggage tagged in any way? Airline or any other labels?

@signalfire: I think the reason there wasn't any security or response from citizens is that the areas were usually in or near the Parisian banlieues, which are areas that are more or less disowned by the government and left to their own devices so long as their activities stay contained and don't "infect" the "upstanding citizens". The banlieues are mostly inhabited by immigrants, mainly from the Middle East and northern Africa as far as I can tell. (I met a lot of people from Algeria and Morocco.)

Also my living situation is much better now, thank you. My experience on the streets was amazing though; even if I could go back in time, I'd still do it again.

@Taggart: The bags themselves were usually left behind. People didn't just grab stuff and go, they picked through things to find what was valuable. There weren't a whole lot of looters together, you'd usually only see one person at a time, maybe two or three at the most.

@paradisepurple: I'll post some Google Maps pictures of some of the locations where I saw this. I didn't see any airline or bus tags. Some bags were labeled with the owner's name, but they were personal labels like you would buy at the store or that would come with the bag.

Here are some Google images of a couple areas I can remember off the top of my head.

RED = Location where the luggage was found. Anywhere that I circled in red was literally luggage, not random trash. Also, the entire red area was filled with luggage bags, not a portion of it. (Also, I used a red arrow to label a fence that had lots of shoes stuck in it. Many of them were fairly expensive women's shoes. )

YELLOW = Location of one of the markets where I know a lot of this luggage was sold. The market is not always there, which is why it is only empty space in the street view image. 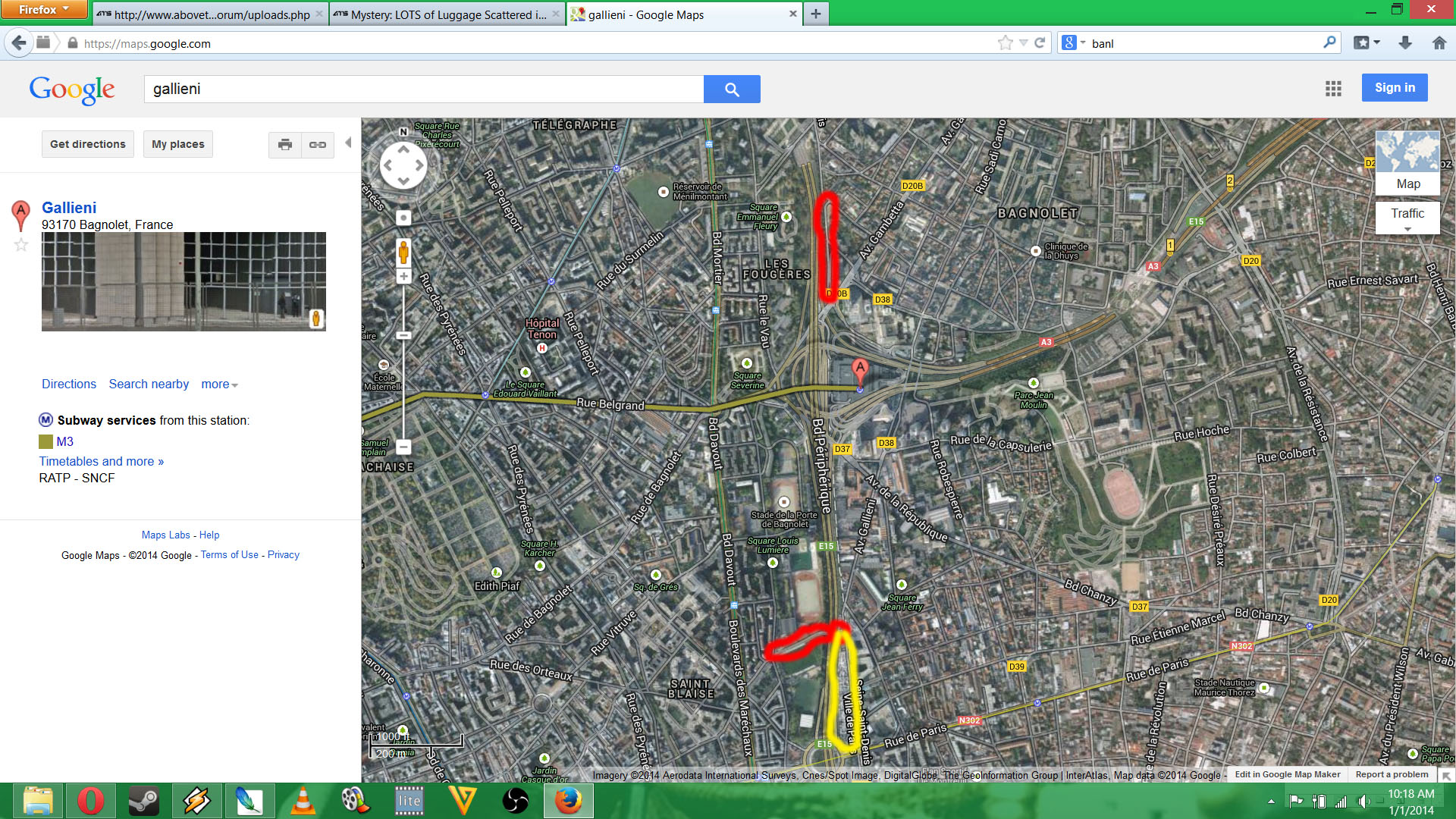 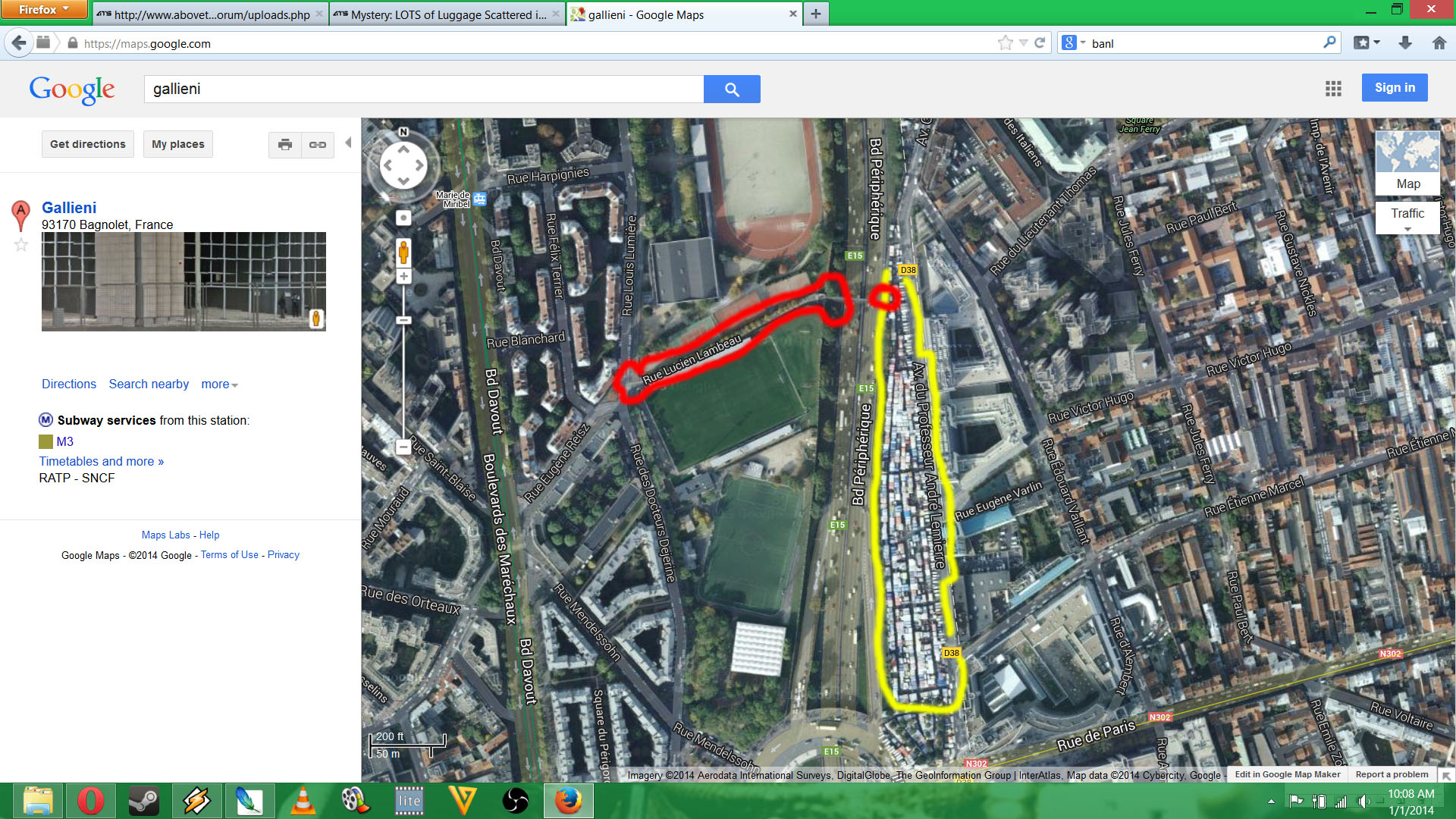 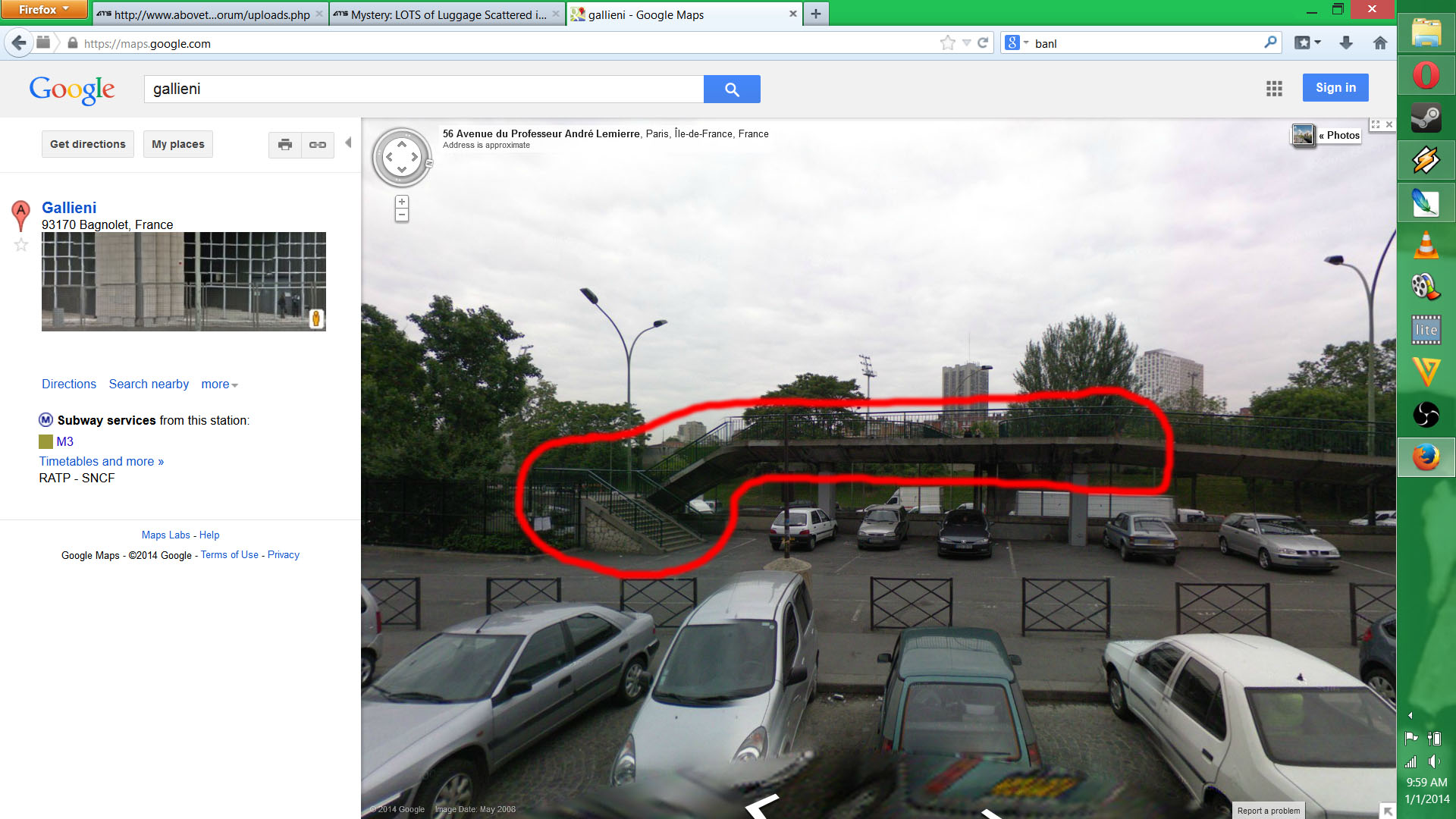 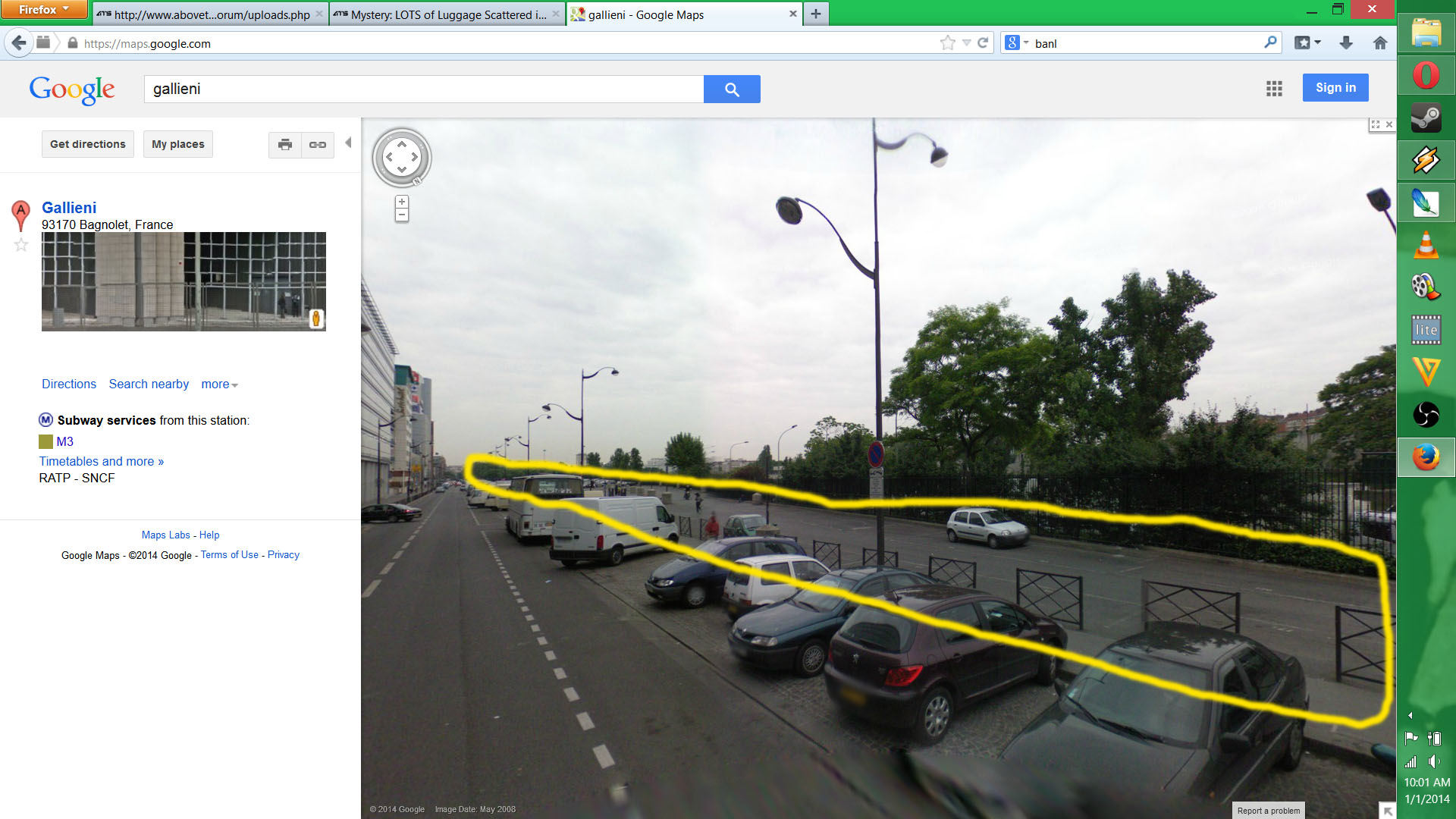 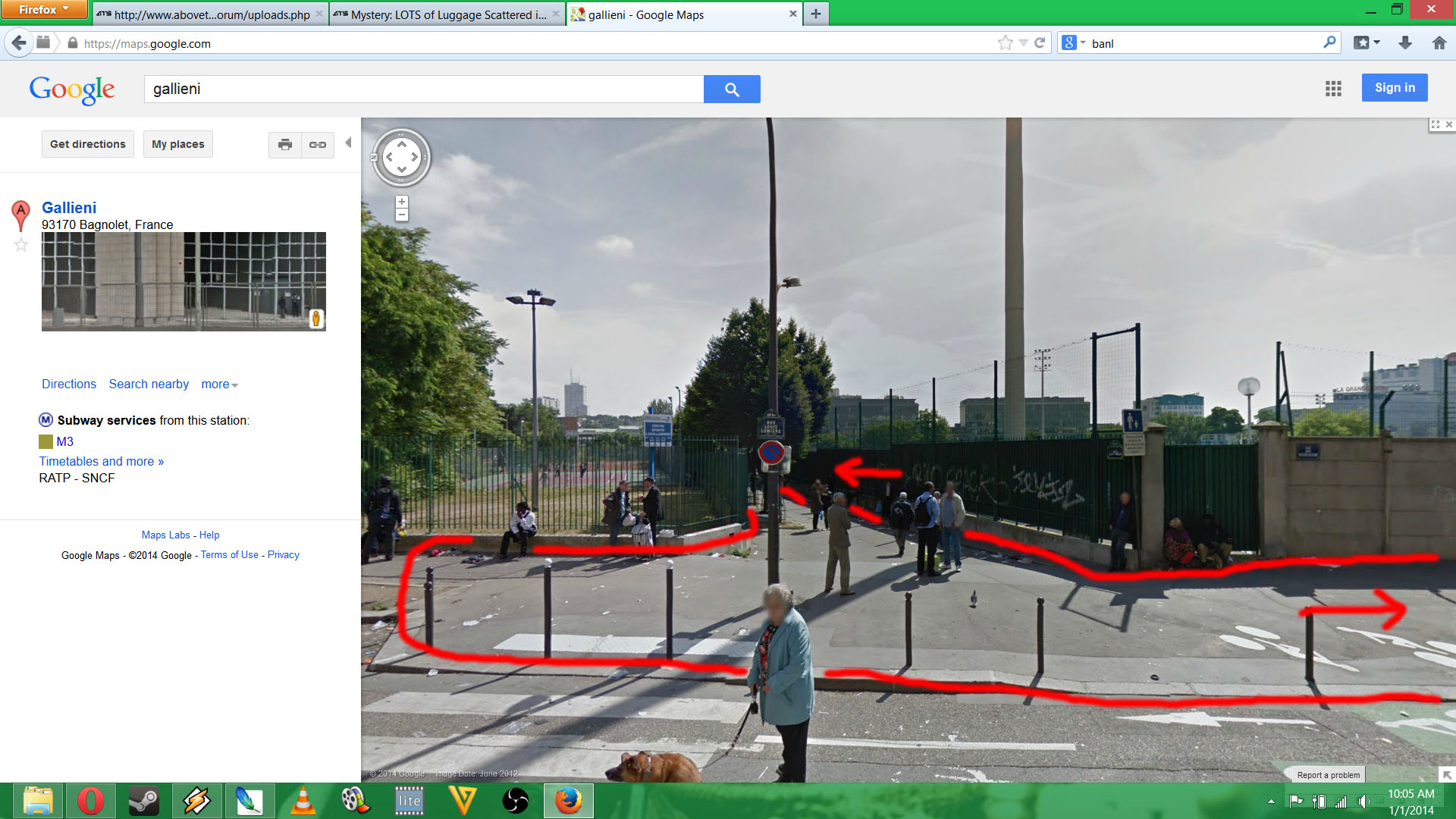 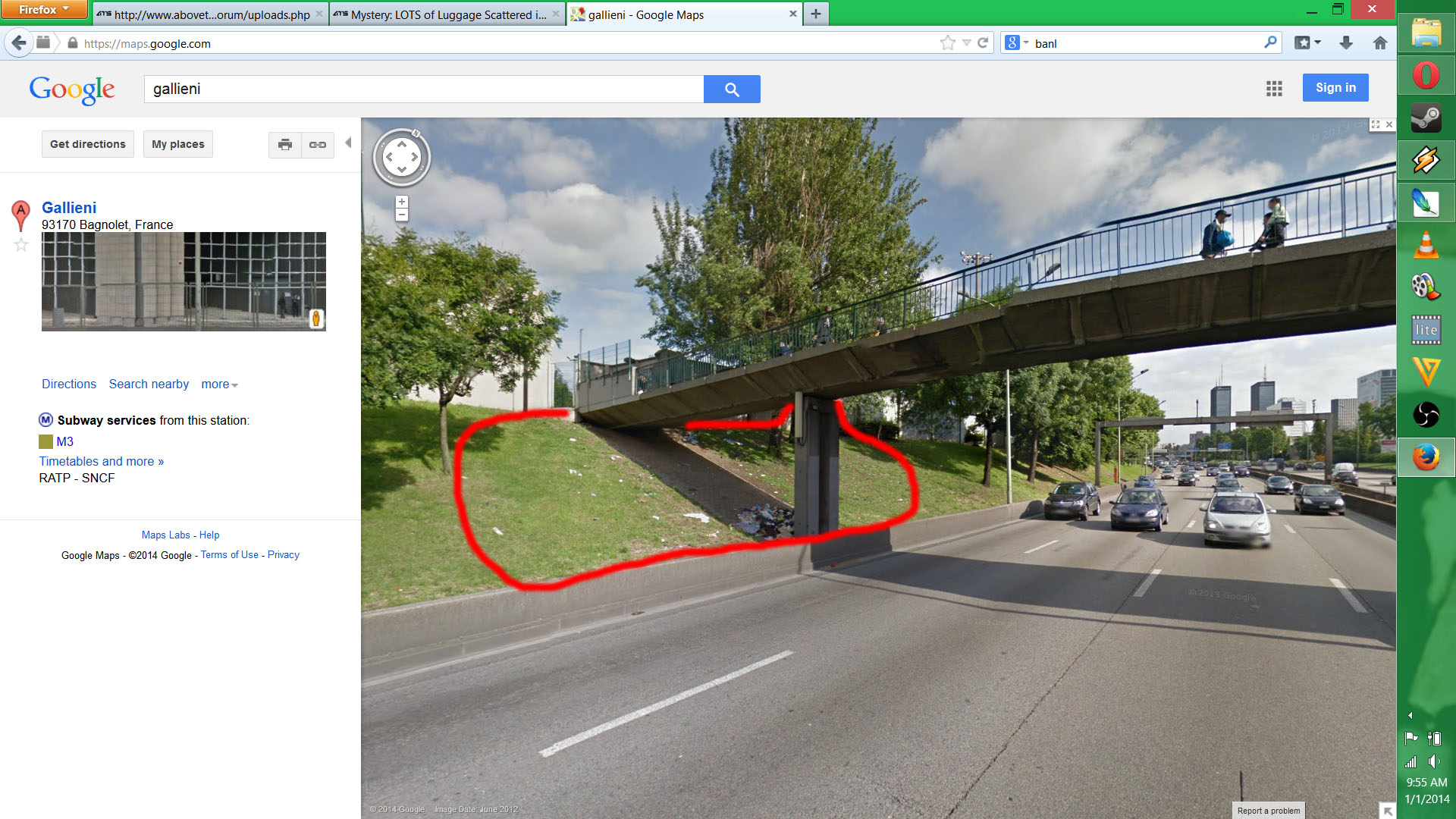 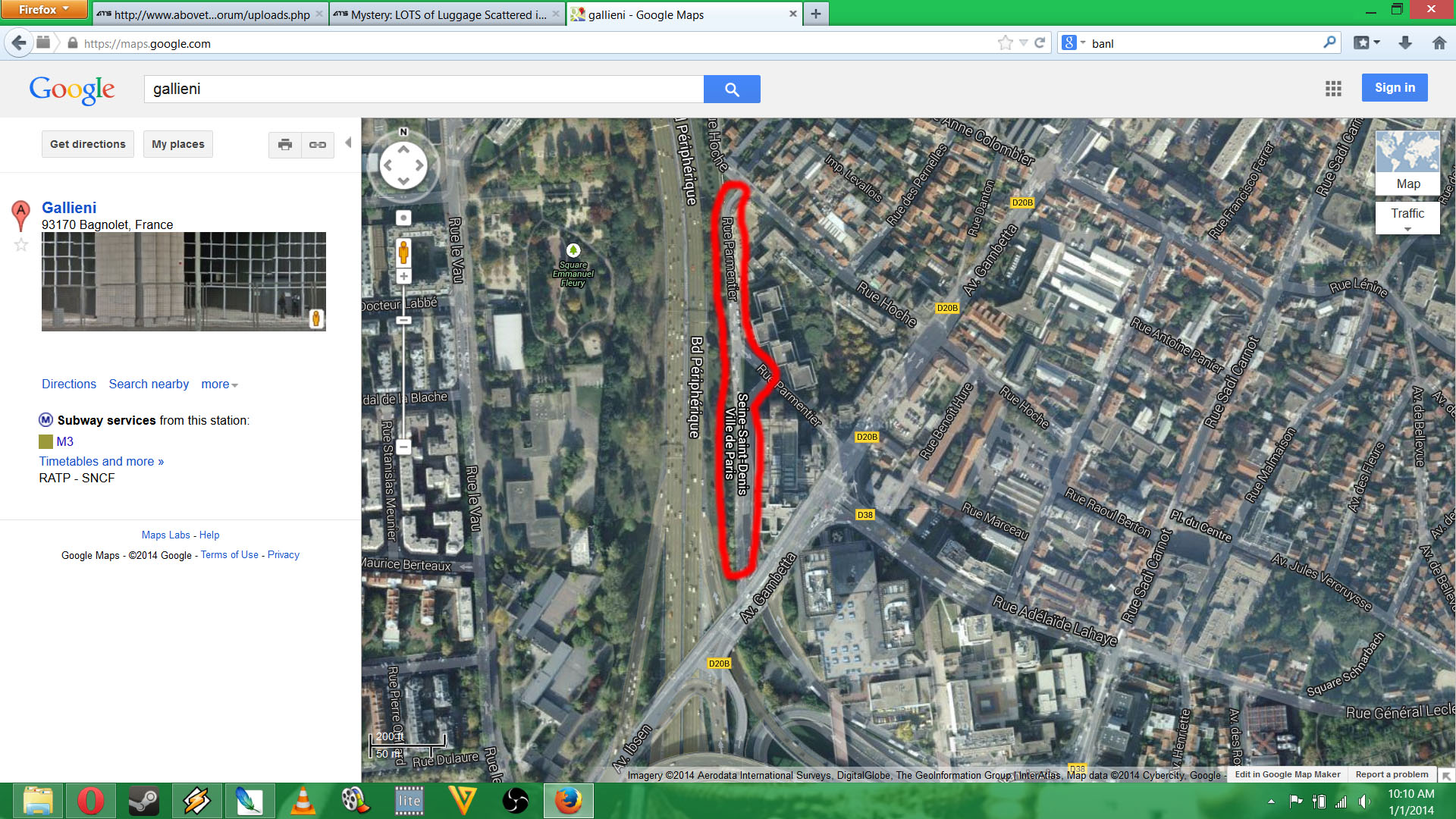 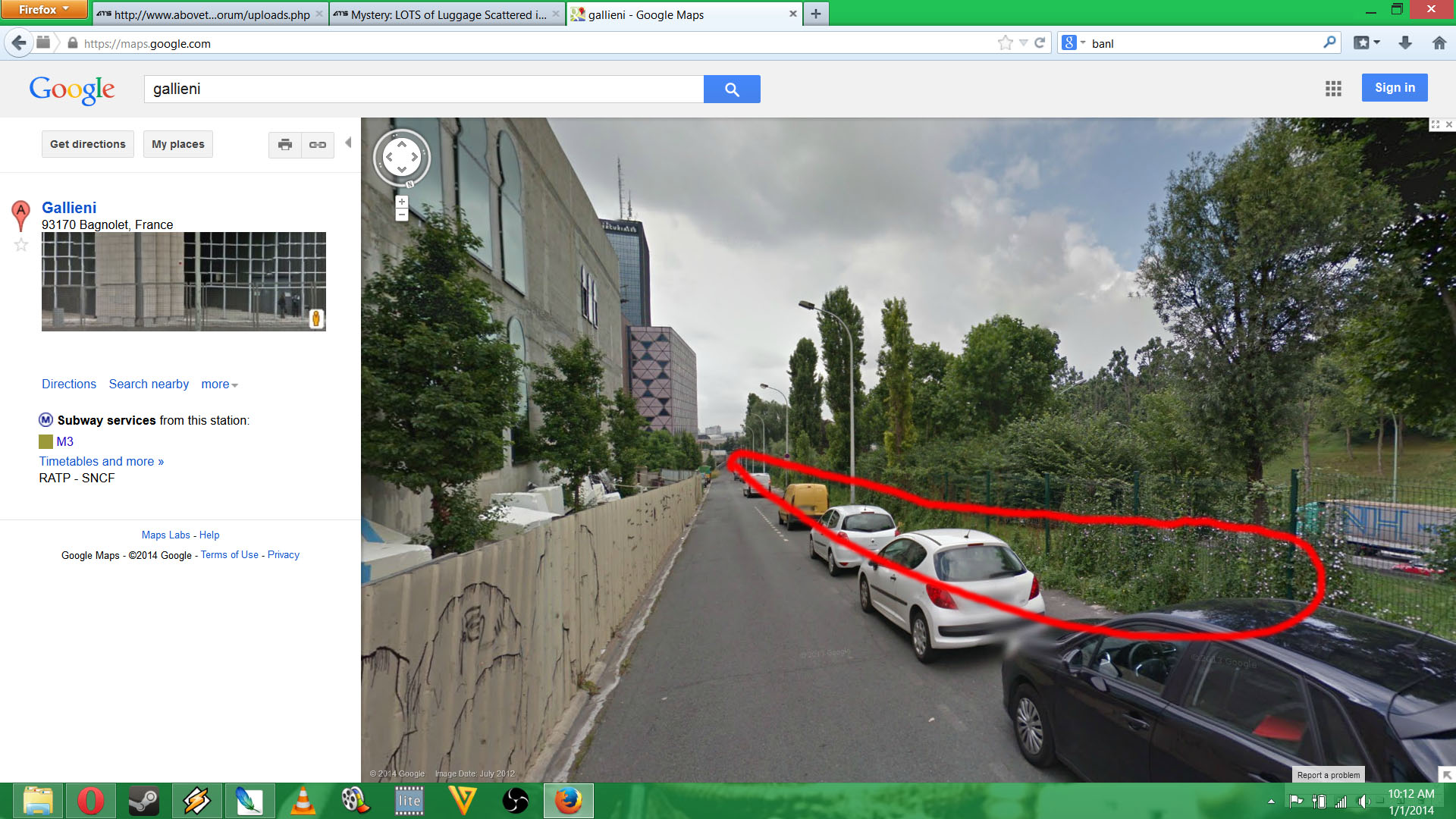 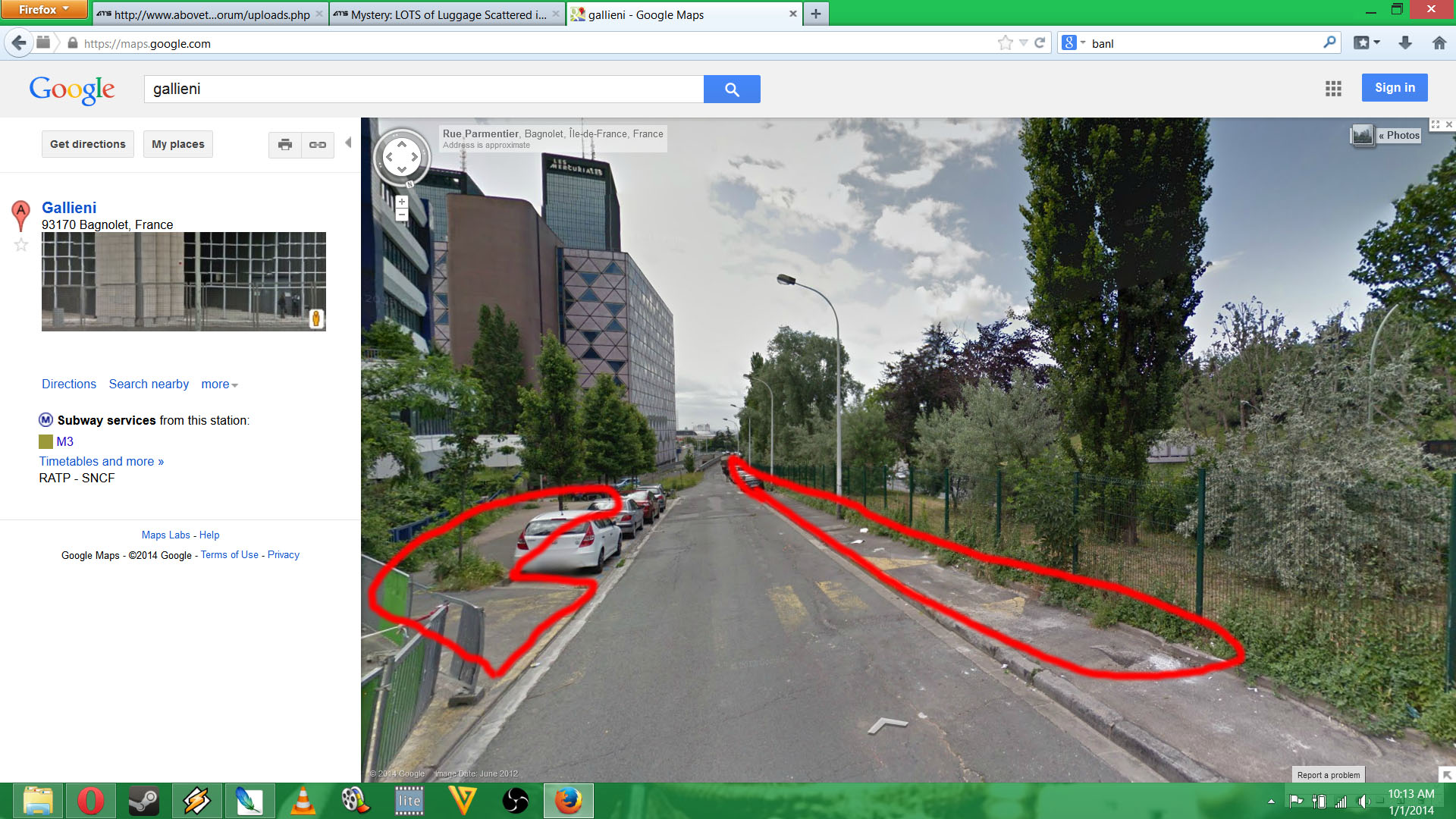 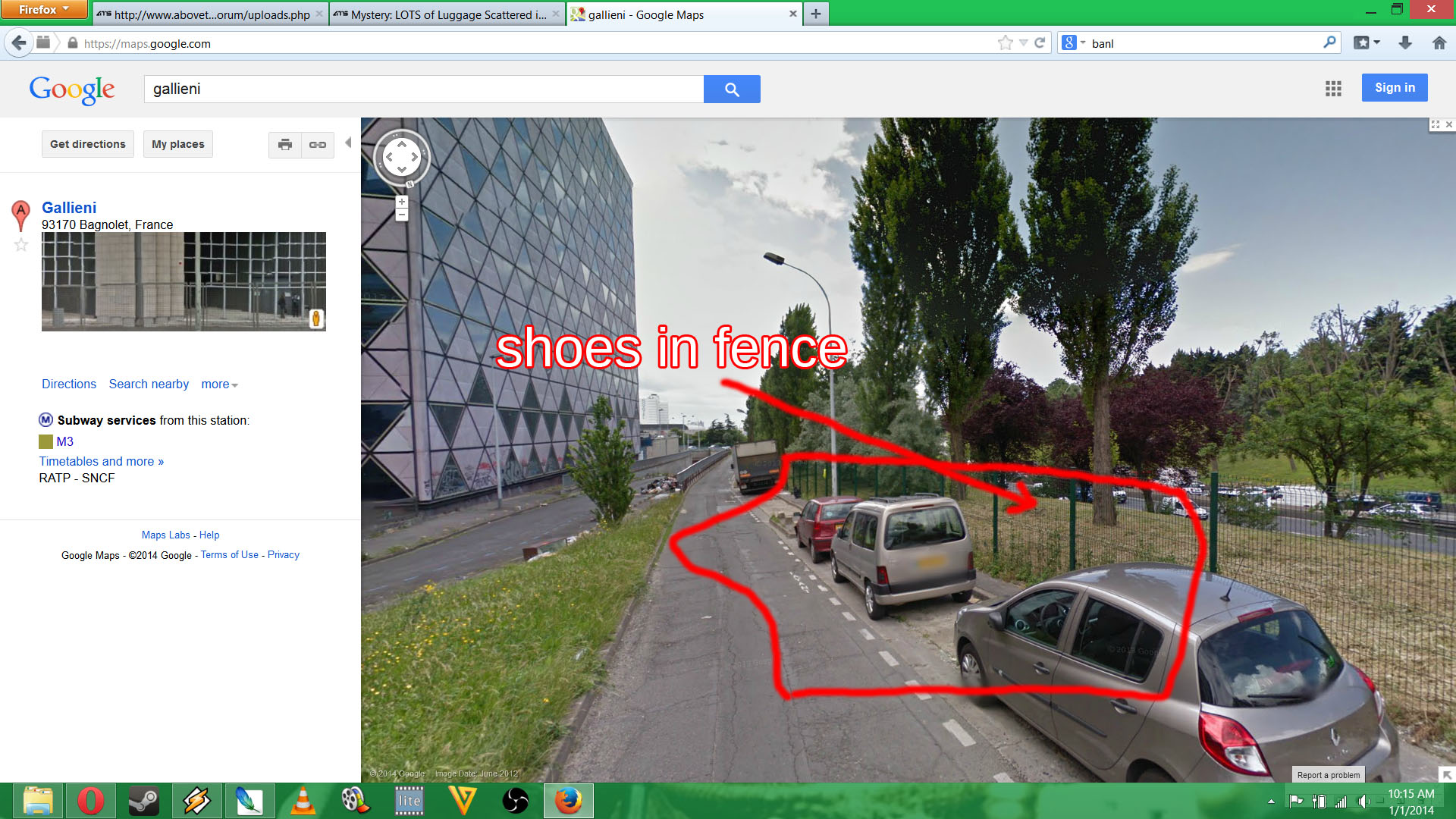 edit on 1/1/2014 by ValerieDivusen because: fixed italics tags

posted on Jan, 1 2014 @ 02:32 PM
link
I wonder if there is a very well-organised crime ring operating at one of the airports in Paris?

CDG is one of the world's busiest airports and handled over 47 million passengers last year. Even though on average less than 8 out of 1000 passengers report the permanent loss of their luggage, grabbing a couple of bags here and there from different flights would add up to a lot of luggage....

Maybe once the thieves have searched for any particularly high-value items the luggage gets discarded in the lowest income parts of the city, kind of in a Robin Hood gesture?

And of course most people travel with insurance so those carrying out the thefts knows the passenger will get compensated for their loss.

CCTV is absolutely everywhere in airports these days though so how on earth they'd get away with pilfering that much luggage... Unless it's been stolen over a period of time and then dumped in one go....

This really has me scratching my head

Just read an article about the extent of theft from luggage at CDG from July 2013 though the thefts were from the luggage itself, not of the actual bags...

Sounds like something out of a J.J.Abrams script. Will be keeping an eye on this thread.


Could they be unclaimed baggage that the carrier just wants to get rid of? The carrier may think it is just easier to pay the claim rather than try to transport and reunite the bags with their owners. Anyway very interesting!

They then routinely gass passengers in the sealed passenger compartments with anesthetics, drop the passengers/victims at a holding locating, and then drop the accumulated un-tagged luggage in various areas that aren't questioned too closely.

People go missing.
Their luggage and belongings get recycled through the scavenging market.
Vampires get food.

On a more serious note, this could very well be a sign of another kind of vampire; human kidnapping, trafficking and smuggling.
Most all the shoes you saw were women's shoes?
That would make sense if women are getting kidnapped, and sold into sex slavery.

posted on Jan, 1 2014 @ 04:55 PM
link
I can only come up with the luggage being left behind in hotels and the owners left without paying their bill and their bags got dumped. Or this is like the lazy postal workers who never finish their routes and just dump all the parcels. There must be a lost and found at airports, hotels etc and they have to get rid of the unclaimed bags eventually.

posted on Jan, 1 2014 @ 05:55 PM
link
Is it possible that the luggage belongs to those individuals abducted and sold into the sex trade or slavery? It would make sense that their luggage would be 'dissolved' by allowing dozens of looters to take it all. This practice would definitely make the task of tracing items very difficult as they'd almost all lead to dead ends.

This hypothesis is also supported by the fence of expensive women's shoes.

...however women who have the luxury of traveling to Paris would probably have many high-end shoes with them, so the luggage disposal from lost and found fits the bill as well.
edit on 1-1-2014 by Xterrain because: (no reason given)

violet
I can only come up with the luggage being left behind in hotels and the owners left without paying their bill and their bags got dumped. Or this is like the lazy postal workers who never finish their routes and just dump all the parcels. There must be a lost and found at airports, hotels etc and they have to get rid of the unclaimed bags eventually.

On second thought, this sounds like a very plausible and somewhat philanthropic answer. I like this more than people who get abducted. It makes more sense, but I'll leave my last post up to see what folks think about it.

posted on Jan, 1 2014 @ 07:03 PM
link
Perhaps the dumping of this stuff indicates that the people were taken to the Mars Colony which i hear is recruiting
||The lost and found people would almost certainly pilfer what they could before dumping so if the bags were intact id say the answer is more dire.....
Aliens may also be dumping the stuff from their ships after
taking the owners for sustenance on long space flights.....


Ever try messaging authorities or governmental agencies about this?