IT'S an alien planet 'just' 40-light-years away. Now Hubble has spent more time staring at it than any other. What it found is pushing back the boundaries of exploration. The planet - known as GJ1214b - is known as a "super-Earth" because of its large size and close orbits to their stars. Very little is known about them. We know they're big. We know they're heavy. We know they're common. We know there is nothing like them in our own solar system. Now a team of astronomers have focused space telescope Hubble's eye on one of the closest known examples - and found clouds. 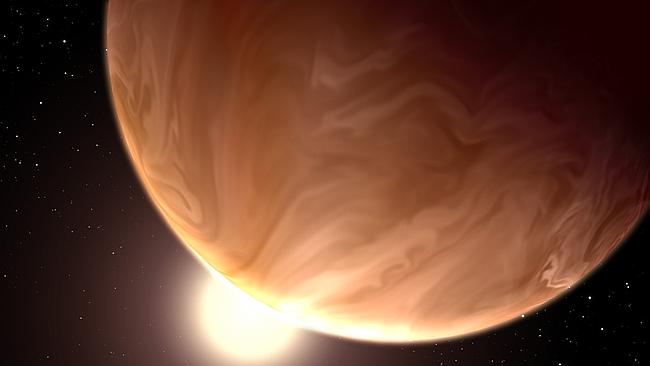 Hubble gazed at the infinitesimally small pinprick of light for a total of 96 hours over a period of 11 months. "We really pushed the limits of what is possible with Hubble to make this measurement," the University of Chicago's Laura Kreidberg said. "This advance lays the foundation for characterising other Earths with similar techniques." "I think it's very exciting that we can use a telescope like Hubble that was never designed with this in mind, do these kinds of observations with such exquisite precision, and really nail down some property of a small planet orbiting a distant star," explained the University of Chigaco's Jacob Bean. GJ 1214b was chosen because it whizzes around its parent star every 38 hours, giving scientists an opportunity to study its atmosphere as starlight filters through it. 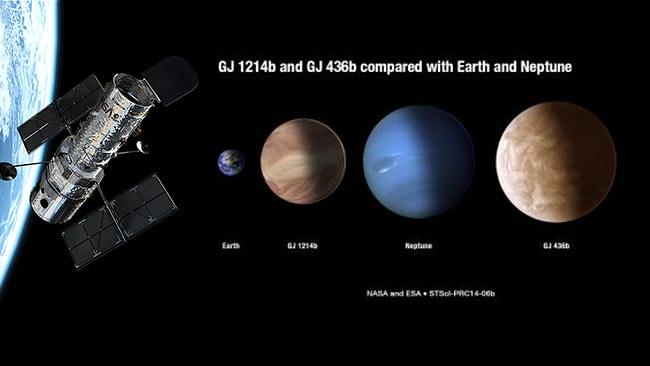 These clouds conceal what's going on beneath. Astronomers still don't know what these clouds are made of. "You would expect very different kinds of clouds to form than you would expect, say, on Earth," Kreidberg said. The clouds could be made out of potassium chloride or zinc sulfide at the scorching temperatures of 230C found on GJ 1214b. Exactly what the clouds are will not likely be known until after the launch of NASA's next major space telescope, the 6.5m James Webb Space Telescope later this decade.


A second team of researchers examined what is categorised as a "Warm Neptune". Only 36-light-years away, GJ436b is much closer to its star than Neptune is to our sun.

More details in the article.
Let's see what happens!


makes you wonder what could live on those planets

Why wouldn't a super earth-type planet also have clouds? Clouds are not uncommon in our own solar system among the smaller rocky planets (Venus Earth, and Mars), and I would think a large super earth may also be able to have clouds. Considering the size of super earths, they would certainly have enough gravity to hold onto a dense atmosphere.

But like I said, exoplanetary research is certainly interesting, and I love that sort of stuff. It certainly makes your imagination wonder about all of the billions of planets out there and the possibilities of life on them.


You're right and I WAS wishful thinking.

I, for one, welcome the idea of other life supporting planets in our galaxy and beyond. Let's see what more develops from this discovery....maybe, just maybe, we're in for a surprise. Optimistic

WE have to be sure intelligent life exists here first and based on what I read on ATS... well.. I'm not so sure???

Made it to Cannes, wow!

Soylent Green Is People
Interesting, but I'm not sure if it is "significant", as you say in might be.


Soylent Green Is People
Interesting, but I'm not sure if it is "significant", as you say in might be.

They didn't really "see" the clouds. They wait for the planet to pass in front of its star ("transit" its star) and then analyze the light from the star as it passes the planet. As the planet transits the star, the light shining through the planets atmosphere can be analyzed for certain characteristics. In the case of this planet, all they knew was that based on the light from the planet and star, it suggested that there were clouds present. They could not tell what the clouds were made out of.


I was quoting the headline...nothing more. It's an artist's impression only.

Exactly what the clouds are will not likely be known until after the launch of NASA's next major space telescope, the 6.5m James Webb Space Telescope later this decade.

I am so excited to see (punny?) what this new telescope is able to discover. Exciting times ahead! Really jazzed about it.

As for life on this planet. It might have clouds but it's also 446 degrees fahrenheit. Maybe fire golems or Sauron.


That would redefine 'give us a cold brewsky.'

posted on Jan, 1 2014 @ 02:22 AM
link
It is positive news, however it seems this planet is like Venus, it might have clouds but they could be made of volatile and noxious gases.

Until technology improves enough we can only guess what makes up these exoplanets atmospheres, once astronomers can accurately determine what elements make up these atmospheres then we can begin to question if these planets can support life.

We are getting tantalizingly close to finding another earth, it's only a matter of time.

It is interesting that the presence of clouds was inferred from the absence of spectroscopic signs from the planet. Speaking about a similar planet GJ 436b, they write:


The news is about what they didn't find. The Hubble spectra were featureless and revealed no chemical fingerprints whatsoever in the planet's atmosphere. "Either this planet has a high cloud layer obscuring the view, or it has a cloud-free atmosphere that is deficient in hydrogen, which would make it very unlike Neptune," said Knutson. "Instead of hydrogen, it could have relatively large amounts of heavier molecules such as water vapor, carbon monoxide, and carbon dioxide, which would compress the atmosphere and make it hard for us to detect any chemical signatures."

Observations similar to those obtained for GJ 436b had been previously obtained for GJ 1214b. The first spectra of this planet were also featureless and presented a similar puzzle: The planet's atmosphere either was predominantly water vapor or hydrogen-dominated with high-altitude clouds.

A team of astronomers led by Laura Kreidberg and Jacob Bean of the University of Chicago used Hubble to obtain a deeper view of GJ 1214b that revealed what they consider definitive evidence of high clouds blanketing the planet. These clouds hide any information about the composition and behavior of the lower atmosphere and surface. The new Hubble spectra also revealed no chemical fingerprints whatsoever in the planet's atmosphere, but the high precision of the new data enabled them to rule out cloud-free compositions of water vapor, methane, nitrogen, carbon monoxide, or carbon dioxide for the first time.


So these clouds hide any possible signs of life or the true environment on the surface. For comparison, we didn't know anything about the environment on Venus (such as sulphuric acid or temperatures hot enough to melt lead) until a probe entered the atmosphere and landed on the surface. This planet is also just too hot for life.

By the way, here's the proposal page for this observation, including the raw data it produced: archive.stsci.edu...
The proposal abstract is quite an inspirational piece of text.


It's just an artist's impression. This planet might be white due to all that cloud coverage, like Venus.
edit on 1-1-2014 by wildespace because: (no reason given)


I think they already have the tools to see exoplanets atmospheres with Fiber optic imagersI think its a matter of time before we can see our first habitable planet , and SETI is working on this system that can trace intelligent sources


A sufficiently developed civilization would use artificial light sources, just as we do on earth. If you were in space looking down on earth, and you cross the terminator, would you not see light coming from the surface of the planet on the dark side?

Would it not be possible to detect artificial lighting based on reflection and detection, taking into account star type and general makeup of the planet being observed (atmosphere)?


Soylent Green Is People
Interesting, but I'm not sure if it is "significant", as you say in might be.

Not yet... But we're getting closer.

What we might be able to do, possibly with the James Webb Space Telescope (Hubble's successor) is be able to spot biomarkers in the spectra of the reflected light of some of these planets. These would tell us if life existed.

As for Civilizations, that will have to wait for Colossus: