posted on Dec, 30 2013 @ 06:53 AM
link
Few Minutes Ago Mysterious "Booms" Being Felt in Toronto Again. Local Media Treats it Normally Anyone Heard it?.

I live in Toronto and about a few minutes Mysterious "Booms" were being heard yet again in Toronto according to CP24 it has being first reported in the whole area of York Region.

Where i live in the GTA Area i also heard it, at first i thought it was an Canadian chinook but after looking outside of my window i didn't see anything in the sky.

Its probably ice breaking away,just crashing down to the ground due to the cold weather we are having.


Thats their explanation for it, but ironical i find it rather laughable as these are the same booms that were reported right during Christmas and after Christmas.

Around 11 p.m. Christmas Eve, people reported hearing a loud “boom” in Toronto, Newmarket, Aurora, Belleville, Richmond Hill, and Sutton. Not only was the boom heard, but it rattled houses, leaving many to believe that a tree had fallen on their rooftop.

I find it ironic how even our Local news media are trying to cover up the strange Mysterious "Booms" as being tress, branches crashing down.

Folks in York Region were awakened to sounds of "booms". Officials say it was likely caused by ice.

Kept up by BOOMS overnight? Police figure they were "frost quakes", loud sounds caused by expanding ice as temperatures


Wonder if it had anything to do with this? 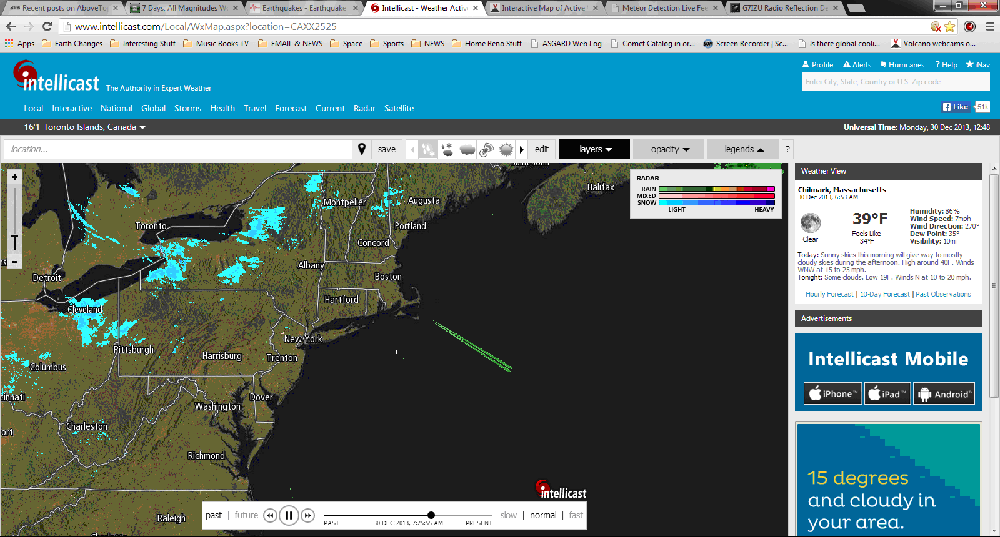 
Zoom of above image 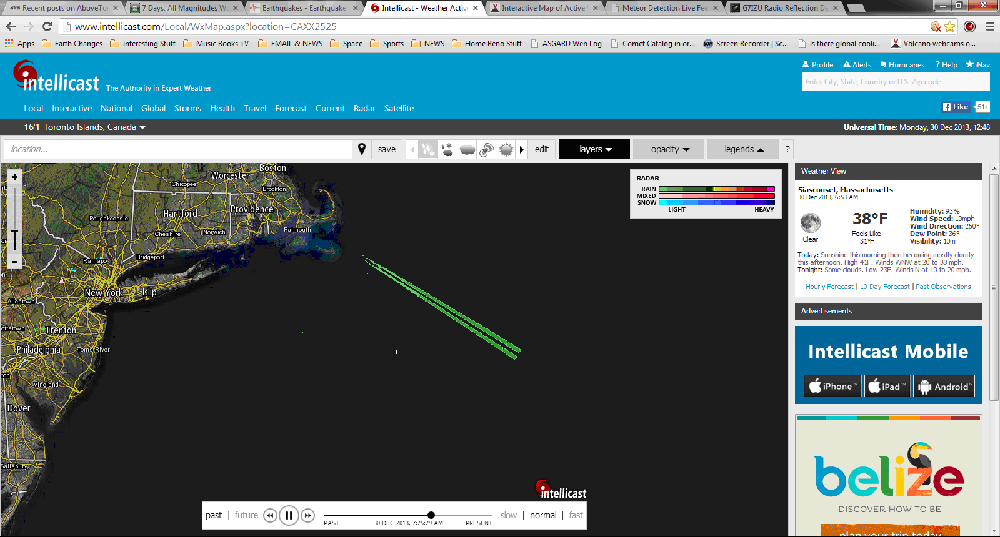 posted on Dec, 30 2013 @ 10:32 AM
link
I think I like my personal theory best. It's damn cold up there in the frozen north. Damn cold. Therefore, so is the ground. Water seeps in in warmer temps, freezes in voids & faults (you do have fault lines up there) The plates are constantly moving to some degree or another, right? Then by logical deduction, pressure is also always on the faults no matter where they are, wanting to be released.

The more direct version: I think the northern faults are having a tougher time moving & such with frozen water in their vicinity or directly on/in them, and the pressure stress is higher, and fracturing the frozen bonds while they move & shift around. Hence, BOOM.

Nyiah
I think I like my personal theory best. It's damn cold up there in the frozen north. Damn cold...


Nyiah
I think I like my personal theory best. It's damn cold up there in the frozen north. Damn cold...


I live in Florida, anything above the FL/GA state line is a frozen hunk to me I was going to call it Canadian Siberia, but figured that was being a little too mean.

No, but seriously, it's winter & surely that cold translates down some ways into the earth. It very well could be something as simple as the expansion & subsequent melting of ice is messing up the pressures along the fault lines.


Nyiah
I think I like my personal theory best. It's damn cold up there in the frozen north. Damn cold...


I live in Florida, anything above the FL/GA state line is a frozen hunk to me I was going to call it Canadian Siberia, but figured that was being a little too mean.

No, but seriously, it's winter & surely that cold translates down some ways into the earth. It very well could be something as simple as the expansion & subsequent melting of ice is messing up the pressures along the fault lines.


Toronto has a very similar climate with New York City. Might be few degrees colder at a time but in NYC snows more. I've been to NYC during the winter and didn't find it any different than Toronto.


My dad, stepmom and brothers live in suburban Detroit, not that far from Toronto. My dad has a thing for Windsor, and a park somewhere on the lake called Rondeau (I think that's how it's spelled) I do know the climate in the region. I was trying to mix in a climate joke that evidently fell flat. My bad, I guess I still think it's possible that some shallow freezing along faults, either known or unknown, could be plausible.

posted on Dec, 30 2013 @ 11:42 AM
link
really?....no discussion or speculation if it could be sonic booms from freakishly high speed aircraft?? seems to me that if the sound was that loud and so widespread, cracking ice would leave a massive crevasse in the ground

loveguy
So the same geology it has been for ???? years, and it's just now beginning to (go boom) based on the weather?


I didn't say it was 'beginning to go', especially not due to weather (come on now) But it's I suppose probably just as plausible, if not perhaps more so, that they're quake booms & there's a sizable one coming down the line for the Toronto region. If one does happen, it's a precursor sound to consider keeping an ear open for in the future.


IDK, but I don't believe the cold quake reasoning, it has not been that cold up here and never ever have i heard of this in all my 50 plus years of living in the 'frozen' north, we were above zero 'celsius' for the last 2 days.
edit on 12/30/2013 by whatnext21 because: (no reason given)

posted on Dec, 30 2013 @ 12:47 PM
link
I think it's coming from the two steel manufacturing plants here in Hamilton On, 40 minutes south west of Toronto.
Both plants have lakefront property. eg, docks, cranes etc. I hear some big booms coming from there direction only about 2 miles from me, and I can see the plants and Toronto for that matter from my balcony.

My best guess is when the winds are coming from the south west the sound of these booms are traveling in the same direction, right to Toronto across the lake.

These booms I hear usually happen late at night and sound like steel being dropped and really loud,though I have heard them occasionally in the day time too.

Rumor is, that when the steel companies change the brick linings of the blast-furnace the use explosives to blast the brick of the furnace inner wall. I have no idea if this rumor has any merit to it at all I might add.

posted on Dec, 30 2013 @ 01:26 PM
link
If some manufacturing plant were responsible for the sounds, everyone in the vicinity would be able to locate it and know that is where it was coming from. And it wouldn't be getting 'explained' by the local media as ice falling off of roofs, which would only be heard very locally, like 1-2 houses away at most. Snow tends to slide off roofs, but that's quiet; ice tends to melt slowly or just stay there.

I lived in Rochester, NY just a few miles farther south than Toronto is for 53 years, which means 53 winters, and I NEVER heard unexplained loud booms that seemed to be coming from the sky or were unable to be traced. The occasional fireworks nut, yeah, but even a cherry bomb is recognizable for what it is, and the sound doesn't spread all that much.

The Seneca Guns are a common occurrence in the summertime in the Finger Lakes region farther south, and you can't blame them on ice. It's not jet planes either because that too would be easily explainable; the Air Force would admit to it. Jets are banned from going Mach 1 over populated areas now unless there's an emergency. This articles surmises it may be UFOs - I have no idea what it really is, but it would be nice to get some answers from somebody instead of being patted on the head as per usual.

posted on Dec, 30 2013 @ 01:47 PM
link
Just a note this whole storm was as an strange itself,why? during the storm last weekend on Sunday i have never so many beautiful and dangerous display of lighting strikes expect these lighting strikes had no sound but they were quite marvelous in display of the colors from Green, pink, light blue then green again.

I did manage to grab just two shots of it. These lighting strikes were quite odd.
edit on 30-12-2013 by Agent_USA_Supporter because: (no reason given)


I thought it said for a second ?

Few Minutes Ago Mysterious "Boobs" Being Felt in Toronto Again. Local Media Treats it Normally Anyone Heard it?.

Huuuu What the, and then O Booms !