I'm so sorry to say 'Schumy' is in critical condition. 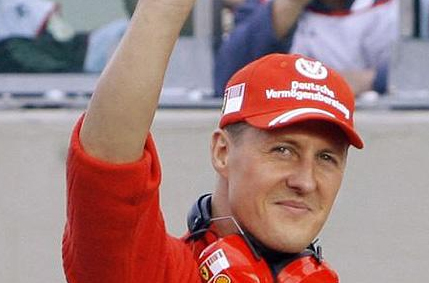 Seven-time Formula One champion Michael Schumacher was in critical condition after undergoing brain surgery following a skiing accident in the French Alps on Sunday, doctors said.

The Grenoble University Hospital Center said the retired racing driver arrived at the clinic in a coma and underwent immediate surgery for a serious head trauma.


Prayers for his family and friends and of course, Michael.


This is really sad, one of the greatest drivers of all time, driving at insane speeds all of his career in places like Monaco, and the like...may end his life on a pair of skis. I am a huge motorsports fan and along with millions of others are hoping for a recovery...

Yes, it isn’t like I followed him like a groupie but I really admired his skill - and - he’s been in a few commercials here that are very sweet.
I really feel for his family. Not that it’s any easier any other time of the year - but now? Just so sad.
I also can’t help but think about ‘Superman’ Christopher Reeve when he broke his back ridding.
The same kind of ‘good’ ‘great’ man - who finally fails under fate and time.
How very sad.
I hope and pray Michael doesn’t end up like Reeves.


I am with you, no groopie to anyone, just a fan whom will pray and hope for the best...hang in there...

Schumacher was wearing a helmet when he had a hard fall at the Meribel resort and initially described his injury as "relatively serious." But hospital officials later said he was in critical condition, arrived in a coma, required immediate brain surgery, and had a "severe head trauma" from hitting his head on a rock, CNN reports.

I heard it was 'severe' on the morning news.

I guess this confirms it.

Please post a link if there is another thread on this. I checked like crazy - but of course we all know how feeble the 'search' engine is for ATS. Sorry if this is a repost!

From what I hear now it doesn't look good for him...


Yes the search is horrible, and my post probably was ruder than intended so I apologize. I usually use Google instead of the ATS search engine and have more luck. Here is one of the threads:
www.abovetopsecret.com...

posted on Dec, 30 2013 @ 03:45 AM
link
The Greatest F1 driver of all time for me.
What a f..k..g tragedy, he was a genious behind the wheel!
But his love for speed and pushing the limits may have caught up with him. Ironic its speed of another kind and his vehicle which provided no protection that may have got him.

Hope he makes it, hes a fighter so theres some hope.

Not a problem - I appreciate your plain speaking. I always know where people stand that way.
Thanks again!
OH - and I’ll use Google from now on!
Happy New year!


Mod-Note: That thread is actually in the off-topic forum, so this one can stay open for the time being.

Best wishes to Michael Schumacher. Not a motorsports fan at all, but this guy is a legend.

Thank you Sky - and Happy New Year to you.

As for Michael? I just read the doctors are taking it 'hour by hour' and will not comment on his outcome.

GRENOBLE, France — Doctors offered a grim assessment of Michael Schumacher's head injuries Monday, providing no prognosis for the Formula One driving great after his skiing accident in the French Alps.

Schumacher has been placed in a medically induced coma to relieve pressure on his brain, which suffered bruising and bleeding when the retired seven-time world champion fell and struck a rock Sunday while skiing during a family vacation.

"He is in a critical state in terms of cerebral resuscitation," said Payen, the chief anesthesiologist treating the 44-year-old German driver. "We are working hour by hour."

Schumacher's wife, Corinna, daughter Gina Maria and son Mick were at his bedside.

"The family is not doing very well, obviously. They are shocked," his manager, Sabine Kehm, told reporters.

I was in hopes of some good news for Schumacher and his Family this morning. I guess that's not to be.

Prayers to them all -

posted on Dec, 31 2013 @ 11:25 AM
link
My thoughts go out Micheal and his family and friends, and I wish for a speedy recovery.
It's sad that after thousands of hrs behind the wheel he had to get hurt just having fun.
As a racer myself, not F1, but off road motos, enduro, rally and desert racing and dh mtbs, it's hard to see someone so talented at what they do, get si seriously injured just having fun.
I have lost a few friends to head and neck injuries,
in fact several years ago I was watching coverage of Dakar, with a racing buddy, and there was a terrible crash that took the life of a competitor, he suffered a severe neck injury. After the program was over I went to the local moto shop to order Leatt neck brace, as they had just come out. As I walked into the shop I noticed lifeflight coming into town from the mountains. From where they were coming from I knew it was someone with a skiing injury, and I thought to myself, "That sucks, someone is hurt bad I'd they had to fly them down the hill".
I found out the next day it was one of my best friends on that chopper, a national champion DH racer and runner up in the world cup.
He was up skiing with his nephew and has decided it was too icey, and after just a couple hrs had decided to call it a day. 200 yards from the lodge he hit a really iced up mogul and fell backwards and broke his neck, he was in a coma for several weeks and is now a Quadraplegic.
Again my thoughts go out Micheal for a full and speedy recovery.

posted on Dec, 31 2013 @ 12:15 PM
link
This is grim news. Thank goodness he was wearing a helmet. The doctors say the accident probably would have been fatal without it.

Although he has suffered severe injuries, the medical team looking after the German said during a press conference on Monday that the incident would likely have been fatal if he had not worn head protection.

Professor Jean-Francois Payen from the Grenoble hospital said: "We believe that taking into consideration the very violent shock, his helmet did protect him of course.

"Somebody having this kind of accident without the helmet would not have got to here."

As far as I can find his prognosis is still guarded, so we can only hope he'll pull through and make a good recovery.

It's his birthday on Jan 3rd, so first hope: make it to your birthday, Schumy, then take it one day at a time!

Besides being a very talented racing driver, Michael Schumacher has also given ten of millions to various charities. He donated $10,000,000 just to the 2004 earthquake and tsunami relief appeals alone. He's truly a good-hearted person and I wish him well.


Michael Schumacher's family hailed the Formula One legend as a fighter "who will not give up", as he spent his 45th birthday on Friday lying in a coma in a French hospital following a skiing accident.


I'd 'hail' that family as a group of courageous fighters too! I can't even imagine being in their shoes.

Time will tell. I hope it's good news. Not because he's a world figure, but a father and a husband.


Michael Schumacher's family has provided French investigators with the helmet camera that the Formula One great wore during a skiing incident in which he was critically injured, his manager said Saturday.

Schumacher's condition remains critical but stable, manager Sabine Kehm wrote in an e-mail Saturday. He has been in a medically induced coma since Sunday, when he fell while skiing and struck his head on a rock.


Sorry, I'm not being insensitive but I don't agree with:

Kehm also sought to play down media speculation about Schumacher's health, and requested respect for the family's privacy.


IMHO - The public deserves better than this. There’re millions of people who have been behind this guy 100% of the way through his career. He's a public figure. He's worth well over 800 million euro - and a chunk a that cash came from people like you and me. Privacy? The public deserves more than ‘privacy’. You can't have it both ways - want to be a world class figure and have privacy too.

I’m not expressing myself well this evening. I don’t wish more pain on anyone in his family - but in a way - the world is Schumi’s family too.

Later the article went on to say he's not our of danger but there was some 'surprising' healing.

prayers & peace to them


"He was skiing between three and six meters (10 and 20 feet) away from the regular ski trail," Albertville prosecutor Patrick Quincy told a news conference at the Palace of Justice in the 1992 Winter Olympics host city.

"At one point, his skis struck the top of a rock slightly visible above the snow. He loses his balance and his body falls ahead of the rock. His head hits a rock located approximately 3.5 meters (11.5 feet) below. The first rock and the second one that he hit with his head are eight meters (26 feet) away from the border of the ski trail."

There has been no evidence that Schumacher took any unnecessary risk that led to his crash.


Peace and Healing to Schumi & Family