Making waves: In the hunt for invisibility, other benefits seen 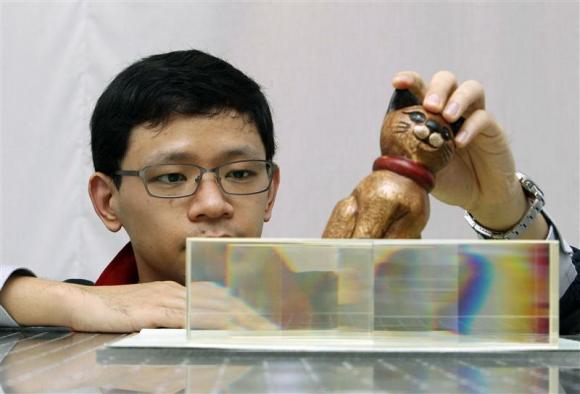 Nanyang Technological University (NTU) School of Physical and Mathematical Science researcher Zhang Baile shows how light passes through a set of carefully angled glass blocks to render an object invisible as he talks to the media about his research at NTU in Singapore November 7, 2013.

A new way of assembling things, called metamaterials, may in the not too distant future help to protect a building from earthquakes by bending seismic waves around it. Similarly, tsunami waves could be bent around towns, and soundwaves bent around a room to make it soundproof. While the holy grail of metamaterials is still to make objects and people invisible to the eye, they are set to have a more tangible commercial impact playing more mundane roles - from satellite antennas to wirelessly charging cellphones. Metamaterials are simply materials that exhibit properties not found in nature, such as the way they absorb or reflect light. The key is in how they're made. By assembling the material - from photonic crystals to wire and foam - at a scale smaller than the length of the wave you're seeking to manipulate, the wave can, in theory, be bent to will. This makes metamaterials the tool of choice for scientists racing to build all sorts of wave-cloaking devices, including the so-called invisibility cloak - a cover to render whatever's inside effectively invisible by bending light waves around it.

The invisibility cloak is just one more thing their discovering There's great flexibility in this material. David Smith of Duke University, widely regarded as one of the founding fathers of metamaterials, said "we're equally interested in seeing this transition in making a difference in people's lives."

Their changing the geometry of material to change the way it interacts with light. They challenge rules and limitations that were for centuries considered written in stone. Jason Valentine of Vanderbilt, who made one of the first such cloaks. Says there's limitations, such as only working for certain wavelengths or from certain angles. But the barriers are falling fast.

Duke University's Yaroslav Urzhumov has made a plastic cloak that deflects microwave beams using a normal 3D printer. I love the future. I daydream about technology a 100 years from now, Providing we don't destroy ourselves in the process.

DARPA, has funded research into metamaterials since 2000, according to the department's website.
Military interest in metamaterials was primarily in making a cloak. Will we see this tech in drones? errr well not see it. I don't know. But it is an exciting world out there. And I think in our classrooms we have the new great innovators of tomorrow. If we can save a town/nation from an earthquake/tsunami, The research is amazing. I have read about military uses in the past. This is a first for me, learning about steering natural disasters and more.

posted on Dec, 27 2013 @ 10:49 AM
link
Talk about a fascinating line of technology. I've been sitting here considering the possibilities and it's just awesome to consider. Totally outside military application, and we all know what forms that has ta...err...will take.

There are a few things I could sure have fun using a Harry Potter style invisibility for though. Then again..you'd have state cops clamoring for it too. Imagine seeing a State cop pull into the interstate median for speed enforcement and ....just vanishes while sitting in place. Oh.. not fair! lol... (Imagine if they forgot to shut it down as they pulled out...err..ouch!)

Animal observation and anthropology would never be the same again and I'll bet we'd see and learn things no one ever suspected when the act of observing is totally removed as an influence on what is being seen.

You know something else that hit me? Using this technology? You'd know who the psychic sensitives were without further effort. Just have someone cloaked and standing in the corner of an otherwise empty room. The ones who look straight at him while walking through, with purpose? Well... Better than any parlor trick!

The future is a wondrous place...if we can focus on the wonder of it for awhile.

posted on Dec, 27 2013 @ 10:54 AM
link
Great now we cant see our oppressors and their drones and to top it off they are making cloaks to negate the effects of microwave cannons. I don't understand the hype about technology. Very little falls into consumer hands that isn't pretty much junk. All of this high science will be for the elite and we are making it for them.

Thanks for swinging through, always like reading your posts/threads.


Imagine seeing a State cop pull into the interstate median for speed enforcement and ....just vanishes while sitting in place. Oh.. not fair!


You know something else that hit me? Using this technology? You'd know who the psychic sensitives were without further effort. Just have someone cloaked and standing in the corner of an otherwise empty room. The ones who look straight at him while walking through, with purpose

Good thinking.. Never even came to mind. Gives new meaning to Fly On The Wall, also.

I also think, the future is wondrous! I'm not afraid of death..... I just don't want to miss anything....ever! assuming I was dying, which I am not. LoL

For example, you can make a metamaterial breakwater (albeit odd looking) that a wave can't get through but a boat can. You have to dodge a lot of pilings, though.


That's good stuff Bedlam. It's good times to be alive. IMO.
I embrace tech. I cant wait till some are implemented and to see
what new tech is just around the corner.