posted on Dec, 26 2013 @ 03:11 PM
link
This is a stone that I've had now for about 20 years. I've tried many times through amateur opinion, to identify what it could be. Do to the story of how my brother found it, we have always assumed meteorite. The problem is that it doesn't look like most meteorites I have compared. Recently I started looking at lunar meteorites and noticed some similarities. The only one closest to the main composition of mine, would be the Kalahari. Though looking at the other examples, I noticed that the embedded matter in my rock, similarly matched most lunar examples. Some of the deposits seem to be feldspar in a crystallized gray soft material. Some feldspar areas are fused in hard light brown stone. Two different colors of basalts appear on my rock and some deposits are closer to being tektite. Learning that lunites have fusion crusts that are highly vesicular, also points me towards thinking my rock is one.
Picture of front (Bic lighter is one inch wide) 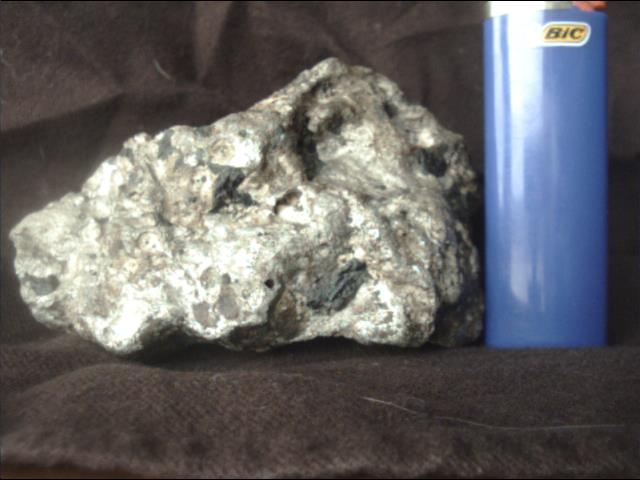 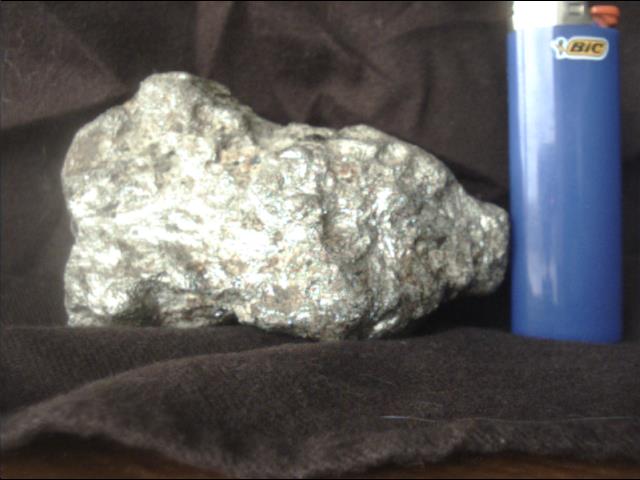 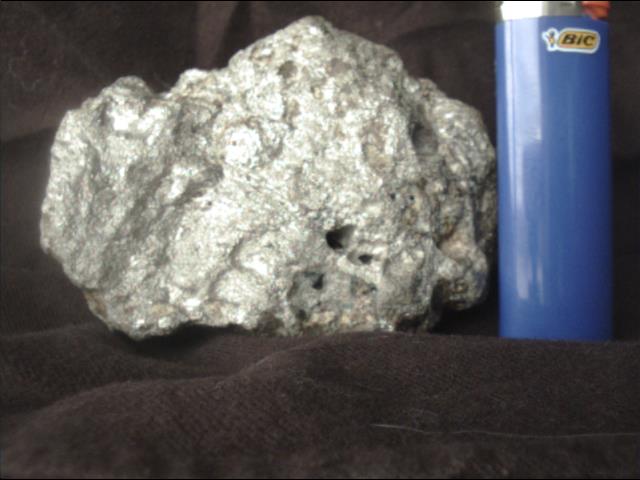 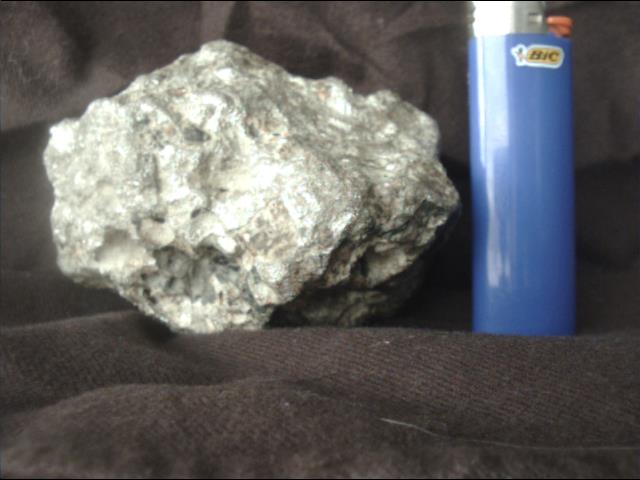 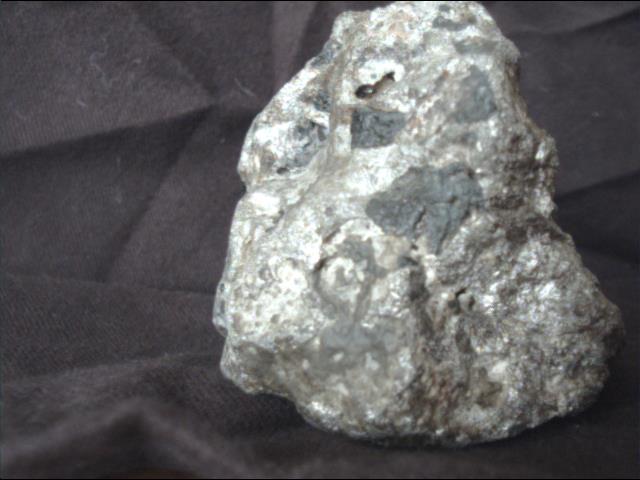 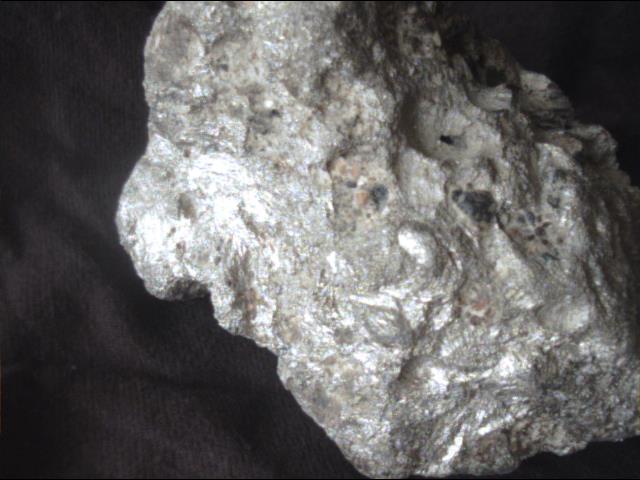 The rock in general is nearly all a pale, reflective silver color. This is mainly due to what I may never live down, if it turns out to be a lunar meteorite. When I was ten years old, I took it to my geology class. My teacher had no clue what it was, did some acid tests, hardness tests and magnetivity tests. Since it was part of my grade to present it. I had it sand blasted to clean it up. If this is indeed the first lunar meteorite found in North America, I sincerely apologize to the scientific community for being a child.
The rock weighs a little more than a kilogram, was found in northeast Ohio. The exact location, is unknown due to the death of my brother. I hope that the rock experts here, can help me determine its true identification. The pictures are low grade, due to only having a web cam.

posted on Dec, 26 2013 @ 03:20 PM
link
Starred and Flagged. This response is mostly just to bump the topic, as I am no expert on this. Will be watching closely to see if anyone can figure it out.


Being no expert myself, I'll simply say, in my pretend American rural accent:

"Looky-like we got gold up on 'em dare hills."


Guess they are rare and wanted.


Meteorites, including lunar and martian meteorites, are easily available for purchase on the Internet. Samples (end cuts, slices, chips, crumbs, dust) of the lunar meteorites sell on the Internet (e.g., e-Bay) for between about $800 and $40,000 per gram, depending upon rarity (perceived or real!) and demand. By comparison, the price of 24-carat gold is about $60 per gram and gem-quality diamonds start at $1000-2000/gram.


I'm unsure myself. When a real expert comes in, I'm sure I'll be corrected on my labeling of feldspar and basalts. As far as turning black, it was mostly a earthy color before it was sand blasted.

posted on Dec, 26 2013 @ 04:41 PM
link
I had a rock that I was hanging onto for a few years and convinced myself it was a meteorite. I was working in Boston at the time and had a job in Cambridge. So I called Harvard University and made an appointment with their Museum of Natural History. The man in charge asked if I found it near the ocean. I couldn't remember where I found it, but I told him I probably found it on a beach in Maine. He told me it was most likely from an old ship used for ballast. At least I can say I went to Harvard and got an education!

Looks to be :
Conglomerate - Sedimentary Rock
Conglomerate forms in a very energetic environment, where rocks are eroded and carried downhill so swiftly that they aren't fully broken down into sand. 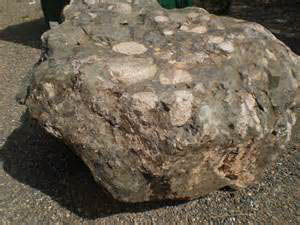 
I looked at the Internets examples of Conglomerate stones. Could not find any that where high in metal content. I can't say its not a conglomerate stone but my area also has very gentle hills and flat land.


Umm he's from Ohio. That's pretty much all city not too rural. Their accent is more eastern than anything else.

posted on Dec, 26 2013 @ 06:38 PM
link
I saw a moon rock in the Smithsonian in Washington and though it was flatter it looked similar to this.

posted on Dec, 26 2013 @ 06:40 PM
link
I know how the rock in the Smithsonian got here but how did yours. I've never heard of a lunar meteorite. Did a piece of the moon break off? Was it hit by something large that broke part of it off?


This will answer your question more than I could. To me it looks just like the one of a kind find Kalahari 009, found in Botswana. I'll have to look to find the Smithsonian example you wrote of. The Kalahari has the same metallic look.


You need to talk to miners. Seen this rock before in Colorado.


Slag ore from various mining operations in the past, is a very plausible source. Can't rule it out.


That is the kind of reply I was hoping for. Thank you, I'll look up Scott Wolter. I really couldn't find a good verification process. That is why I'm posting here.

What color line did it leave?
Below are the most commonly mistaken rocks for meteorites

Meteorites will leave NONE to a very Faint color line