posted on Dec, 23 2013 @ 03:50 PM
link
Pounding stone blocks into shape by hand must have been a tiring job imagine the physical toll
the ancient Egyptian stone masons must have suffered pounding away all day with heavy dolerite pounders.

Now I got to thinking if I had to do that job all day dressing stone blocks for the pyramids how would I make it easier on myself?. Well after a bit of thought I decided on a simple counterweight method using only a piece of rope a plank and a piece of cloth which would save me lots of effort. 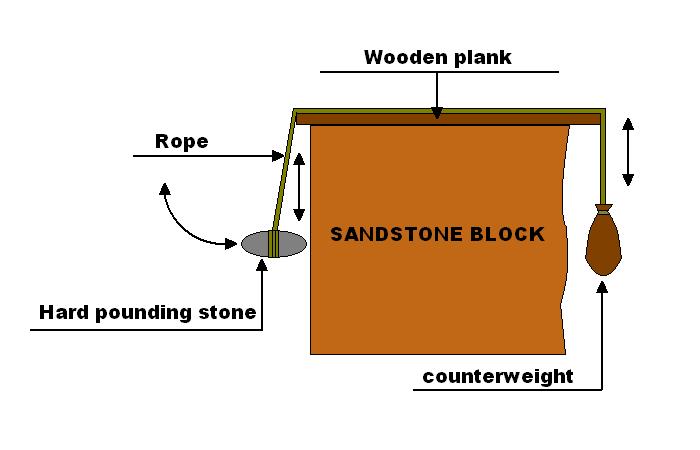 Simply tie the pounder to a length of rope with an equal weight on the other end and drape it over the stone block the plank is just to stop the rope fraying on the stone. Easy to do fully moveable and a lot less effort this also greatly boosts productivity the Egyptians understood counterweights and all the materials for this method were available and I’m sure the workers would have utilised this trick with all the effort that it would save if they knew of it.

I’m not saying they did use this method but they certainly used a lot of tricks we don’t yet know about which gave them the ability to be so prolific in their monument building. What do you think? is this a likely productivity boosting trick they used and is there any evidence that points to this.

posted on Dec, 23 2013 @ 04:08 PM
link
At first I thought it would be something impractical but your idea is a neat one. Even all the parts are easily replaceable if the need for it arises.

But instead of having a counterweight, you could have a little board with hooks where you could fix the rope, with a ring already installed on it, to have your stone at definite heights. It would probably be more stable too.

Bravo again for your idea.


There could be hooks I suppose but then you would need to adjust them every time you needed to adjust the height of the hammer. I think a bag of sand or pebbles would be the best counterweight as when the hammer stone wears down a bit you can remove some weight to re-balance.


There are a lot of problems with that theory haven123 and if they could do that they would have just cast the blocks one on top of the other and you wouldn’t see any joins and the whole pyramid would be virtually one giant lump.


that is a neat basic concept that has merit in general design. Someone else offered an improvement so I'll throw in one of my own.

Have an eyelet/pulley affixed at the top of the block (on a separate mount perhaps) and the mason runs a cord up to it and down to his hammer on which he swings with his right hand (or left). With the other hand he controls the height of the hammer by holding the other end of the cord and letting some of it slip upwards which then allowed his hammer to work downwards.

The eyelet/pulley, due to the nature of the physics would halve the amount of force needed to move the hammer up or down, but we can assume that downward would be the more practical way to work.

Yet, my opinion is that the blocks were not cut in that manner nor was anything about the structures done as is conventionally reasoned.

posted on Dec, 24 2013 @ 06:39 PM
link
I have a theory on moving large stone blocks too which is simple, cheap and effective and would in theory make building the pyramids 10x easier than the conventional methods suggested by mainstream Egyptologists.

I’m currently building a physical model to prove the concept and there are also some actual architectural features of the great pyramid that support my idea. I’ll be posting a video at some point laying this all out but it probably wont be for a few months yet.

Hence the reason you can't fit a piece of paper between the joints, they simply cast up to the last block and use that face as part of the mold for the next pour. Dragging a "cement" like powder up the slope would be a lot simpler than dragging already dressed rock up and I could imagine a lot less people to just simply form up and pour the aggregate and let it set.

Taking a few steps further one could:

1. Increase the size of the striking stone (since it does not have to be held) to increase the speed at which the dressed stone is completed.

2. Pivot the striker stone to more easily generate an even surface. Like a typewriter.

3. Instead of a striker stone, how about a striker cylinder? Held length wise from above outside the width of the dressed stone? Simply work it from top to bottom. It would produce an even more uniform surface than a single stone.

4. Generate guides on each side if the dressed stone. Work the cylinder to the guides and no more. This has the affect of mass producing identical (more or less) blocks.


There was some theories being thrown around about the pyramid builders using cement too, casting much of the casings and inner stone work rather than using quarried stone etc..

posted on Dec, 27 2013 @ 12:32 PM
link
Well if it were me I would have a stone attached to a rope, then hoisted into the air with a pully system. Then swing the stone across another stone until it was pollished or in the shape needed for further polishing.
edit on 27-12-2013 by Tylerdurden1 because: (no reason given)