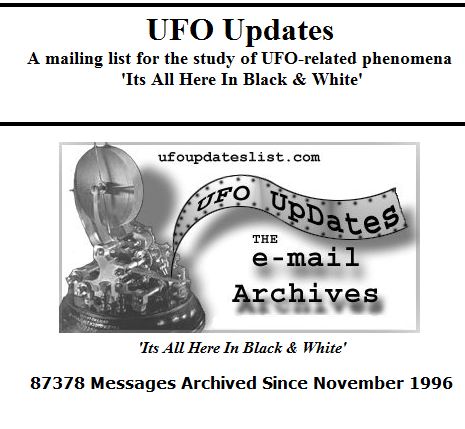 The fragmented nature of ufological discussions is set to become significantly worse for the foreseeable future with the announcement today by Errol Bruce-Knapp that the plan is "to mothball" the UFO Updates email discussion list.

That email discussion List has served as the closed thing I've seen to a centralised discussion point for ufo researchers during at least the last decade.

The UFO UpDates mailing list, operated by Errol Bruce-Knapp, has been around for many years. As I posted in a previous thread in 2007: (Free UFO Researcher Starter Pack):

Originally posted by IsaacKoi
"UFO UpDates is probably the best (public) discussion List for reading the views of the biggest names within ufology. It even manages to get quite a few skeptics discussing issues with pro-ETH researchers".

Many of you will have come across the archives of posts to the UFO UpDates mailing list online at:
ufoupdateslist.com...

For those not familiar with it, UFO Updates regularly features posts by authors that will be familiar to many of you that spend too much time in the Aliens & UFOs forum (e.g. Stan Friedman and Bruce Maccabee), some serious researchers that may not be so well known (e.g. Jan Aldrich of the Project 1947 website), as well as a reasonable number of skeptics (e.g. Kentaro Mori, John Rimmer and others).

Here's a random bit of the table of contents for a sample few days: 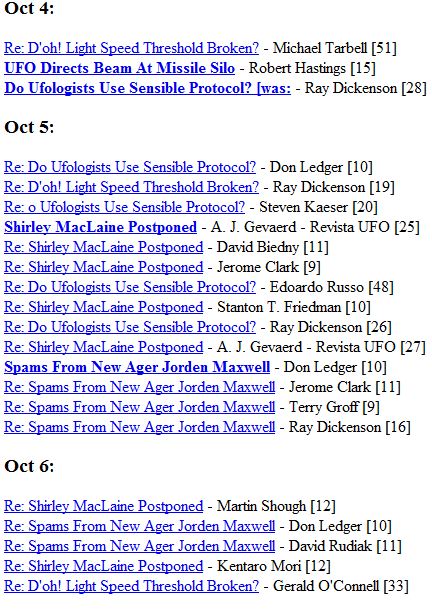 Here's an image of a fairly random post (featuring Stanton Friedman having a slight disagreement with Michael Salla): 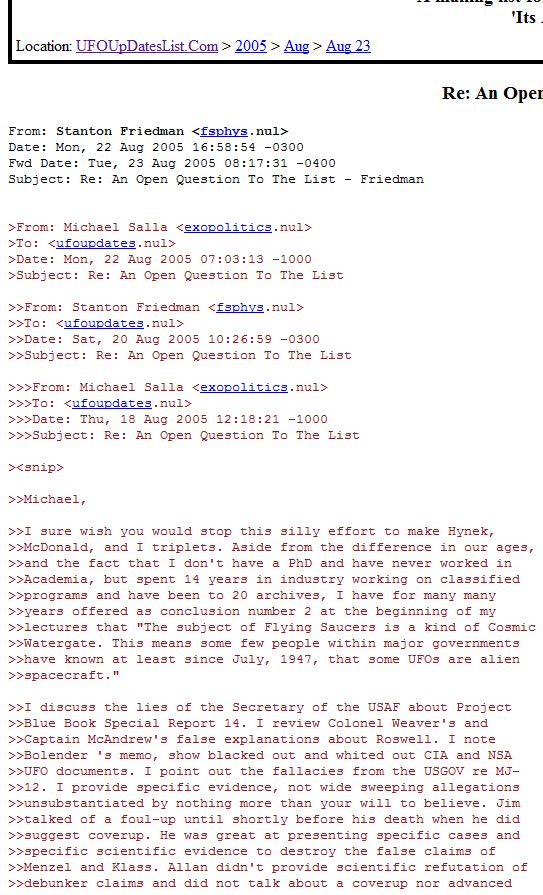 As if the state of ufological research were not bad enough already...

Anyway, I hope that Errol is well and would like to thank him for his efforts running the List up to now. It doesn't sound like there's much chance of him reconsidering, although I'm always an optimist.

Perhaps there could be a hand-over to a lower-maintenance successor email list (e.g. a Yahoo Groups group)???
edit on 23-12-2013 by IsaacKoi because: (no reason given)


The subject of ufology is on it's last legs.
More and more people are now coming to the conclusion that we are not being visited by craft and aliens from other planets. I was once a believer that we were, but over the last few years i have come to the believe that the subject is bunkum.
Real evidence is required and quite honestly there is none. There are to many quacks out there. I lost my interest when people such as Clifford Stone was saying that he had visited another planet.

alldaylong
The subject of ufology is on it's last legs.

But there is still a heck of a lot of discussion of UFO sightings etc on the Internet - it just seems to be very fragmented, spread over numerous different forums, email Lists (some public, some private), blog comment sections, numerous Facebook pages etc etc.

The UfoUpdates List was the closed thing to a central meeting place.

Now we can expect even more time to be wasted reinventing the wheel within ufology, with researchers not becoming aware of research/investigations already done by others...


Disappointing news, why couldn't ATS incorporate something like that into the current system? Food for thought.


I have to point out, that many of the "big" figures in the field have demonstrated a lack of foresight and indeed critical thinking, to the point where to listen to their seminars, buy their books, or indeed pay any attention to them what so ever, marks one out as also lacking critical thinking ability.

The downfall of networks which seek to promote anything except rigorous scientifically lead investigation into any and all incidents, reports, theories, and ideas, is in my view a positive step. It will empty the stage, and allow persons who have the ability to properly investigate the subject, to step into the fray, and actually get results that can be verified in a proper manner.

It might seem like an end, but I have a feeling that this will only be a new beginning.

Aerial Phenomenology is a better alternative.

Sometimes in order to move forward, one has to go back to basics and cut through the b.s. dogma about "reptilians, greys, nordics, etc".

Establish that a lot of unknown anomalous aerial phenomena is of an extraterrestrial nature and THEN you can start talking about who might be by it.

It's chlorine in the gene pool of this subject.

BTW: I'm pretty sure UFO Updates shutting down has to do with it being pre Web 1.0.

It's the evolution of the internet. Old ways to communicate and share give way to new ways.

It would not shock me in 5 or 10 years to read something similar about ATS's message boards.
edit on 23-12-2013 by JadeStar because: (no reason given)

TrueBrit
The downfall of networks which seek to promote anything except rigorous scientifically lead investigation into any and all incidents, reports, theories, and ideas, is in my view a positive step.

Um, I don't know if you are familiar with the UfoUpdates mailing List but over the years it attracted lots of prominent SKEPTICS as well as the more rigorous UFO researchers (in addition to some less critical individuals).

It really is/was pretty unique as a place where different points of views were expressed by leading members of various camps.

If (as your post above appears to imply) you think the UfoUpdates mailing List was a network which sought to promote something other than rigorous scientifically lead investigation, then I'm not sure why you have that view.

posted on Dec, 23 2013 @ 09:27 AM
link
Has he tried to find someone to take over the mailing list and perhaps in the process update the look of it, archive the old stuff which I'm sure is invaluable, and maybe make a decent living off it with a tiny bit of advertising or other revenue (I know, I know....). Even a yearly conference arranged between interested participants could breathe new life into it and also provide some worthy soul with an income.

Thanks for your work on this also, Isaac, and the heads up.

Not that I'm aware of.

I've suggested a hand-over to a lower-maintenance email discussion List (e.g. using the Yahoo Groups or Google Groups infrastructure) so that the relevant researchers can keep in touch without the manual work required on the current custom-built software, which requires the moderator to manually reformat many posts to that List and individual links within each post.