Biologists in Sri Lanka have published the first documented evidence of dwarfism in an adult wild animal. A male Asian elephant (Elephas maximus) measuring just over 1.5 meters (five feet) in height was seen in an aggressive encounter with another male of average size. The elephant's small stature was due to disproportionately short legs, according to the findings published in the IUCN/SSC Asian Elephant Specialist Group journal Gajah. "The 'dwarf' was by far the main aggressor in the altercation and appeared to be older than the other, a young adult," states the study. "Other than for the disproportionately short legs, morphologically and behaviorally the dwarf appeared normal." 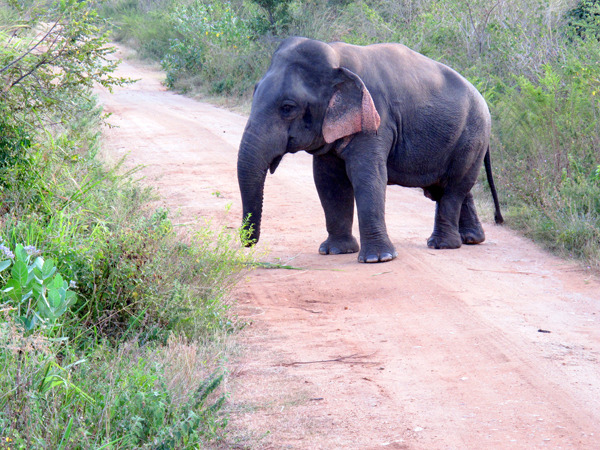 Dwarfism is a condition in which either the limbs are disproportionately short relative to the body, or the whole body is in proportion but is smaller than usual. It can be caused by a number of genetic mutations, and is relatively common in humans. It has also been selectively bred in many domestic animals, such as dogs, cats and cattle. However, dwarfism in the wild is incredibly rare.

"If you think about it, most animals, especially mammals, are either predators or prey. If you are either and are born with short limbs you would be at a very big disadvantage," Prithiviraj Fernando of the Centre for Conservation and Research, and one of the authors of the paper, told mongabay.com. "A dwarf prey animal is very likely to be caught by a predator and similarly, a dwarf predator would find it very difficult to catch prey. So such individuals are very unlikely to survive in the wild. Elephants in Sri Lanka are unique (together with those in Borneo) in that they have no predators. So he was very lucky that he was born here!"

continue to source article at news.mongabay.com


The source article describes some of the things this guy had to overcome already including what they think may be some gun shots. Shooting elephants is bad enough but shooting him is like picking on the little guy no wonder he seems to have an attitude.

I think the article is kind of interesting and informative. You know I never thought about why we don't see dwarfism in the wild in fact I thought it happened occasionally and had been recorded before. Oh well I learned something new.


Without trying to find the article (probably impossible for me) I read someplace (several years ago) the last mammoths to die out were supposedly on some island and they were all pigmy. environment was insufficient to support the full grown animals so they all became smaller and lived past the big extinction of the mega fauna. They might have been killed off when the island was discovered by man, who was hungry.....or so the story indicated ?

I am around elephants and their trainers quite a bit.. Magnificent animals who are both loving and respectful to those who live and care for them.... Asian Elephants, so I do not have any experience with the African types. It took a while to get used to their size and demeanor... and I would not want one pissed at me so I always buy something they like to eat when I know I will be next to them... Sugar cane is a favorite and it does not take much to brighten their beady little eyes... Then the next thing you know they have their trunks in all kinds of places looking for more cane ! Embarrassing for the women but I get a kick out of it! Yes, I know I bad!

What an interesting story! A dwarf elephant that was being aggressive towards a much larger elephant. Reminds me of a time when I had a best friend who was a bit on the short side. He always thought people were poking fun at his stature and would get so irritated that usually I had to prevent alot of altercations from taking place. Always getting angry with women that didn't want to talk with him, but it wasn't from his stature, it was from his attitude. If only he knew...which is why we called him Napoleon. He hated that name.

Went off to work in the movie industry, he did.

Can we have one as a pet?

LOL what film is that from? I recognise the actor in the back...

LOL what film is that from? I recognise the actor in the back...


hmmm not heard of it.


Same goes for elephants, not only mammoths.

'Dwarf Elephant' is an extinct elephant species that lived on islands, and adapted to resource-poor environments.

Given its size, this one found in Sri Lanka seems to be similar.

Dwarf elephants are prehistoric members of the order Proboscidea that, through the process of allopatric speciation on islands, evolved much smaller body sizes (around 1.5-2.3 metres) in comparison with their immediate ancestors.


hmmm not heard of it.


Actually its a very good family movie. Its the sequel to "Journey to the center of the Earth!"