HELENA, Mont. (AP) — The hot molten rock beneath Yellowstone National Park is 2 ½ times larger than previously estimated, meaning the park's supervolcano has the potential to erupt with a force about 2,000 times the size of Mount St. Helens, according to a new study.

By measuring seismic waves from earthquakes, scientists were able to map the magma chamber underneath the Yellowstone caldera as 55 miles long, lead author Jamie Farrell of the University of Utah said Monday.

The chamber is 18 miles wide and runs at depths from 3 to 9 miles below the earth, he added.

This Dr. Farrel goes n to say with the revised figures there's enough lava down there to match he supervolcano's three eruptions over the last 2.1 million years!!! 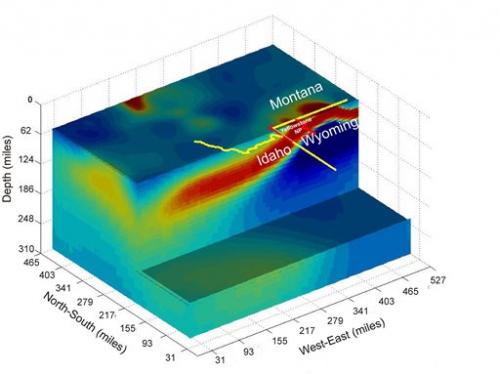 Steamboat Geyser
I don't know if it' connected but on July 31 2013 Yellowstone National Park's Steamboat Geyser—the world's tallest—has erupted for the first time in more than eight years. this time shooting water and steam some 300 ft high... Maybe things are getting more active Yet the USGS still lists conditions as normal

I mean... As long as it burbs, it isn't stock piling the energy until it reaches a critical point.

Unless it is already critical of course... It's only a matter of time until the lid pops.
It would be an awesome event. To bad that it will cause so much damage in the process.

posted on Dec, 21 2013 @ 01:53 PM
link
I think it would be neat to have that volcano erupt. I wouldn't want it to be a supervolcanic eruption though, just a medium sized eruption to make things interesting. Maybe we should put it on the schedule for valentines day or maybe even St. Patricks day.


please follow and get your self updated on how YS works . the steamboat erupts on avarage once every 6 years or so and that is normal . the one that we closely watch is old faithful . yes she is larger then we first thought however that is still not an indicator that she will erupt . i for one am waiting for quake swarms that the smallest one is 5+ near or in the volcano herself with signifgant deformation . then i will worry . these can escalate quickly or slowly , but in modern times no one really knows ....


Already posted, back on December 11th

posted on Dec, 21 2013 @ 05:09 PM
link
I know it doesn't fit with the apocalyptic bent of this website, but I can't help thinking that the recent studies that supervolcanoes are not dangerous as thought is correct. See, e.g.:

Today I did some google searches for "supervolcano" and "extinctions." If supervolcanoes were so catastrophic, surely some prior Yellowstone, Long Valley or Toba supervolcano eruption claimed a number of species of animals, right? I mean, most species aren't nearly as resourceful as humans- surely a lot of dumb hoofed animals (e.g. bison) died out because they couldn't cope with the results of super-eruptions, right?

Well, the google searches only revealed a theory that Toba did NOT cause the purported near-extinction of humans 70,000 years ago:

So apparently, there's not a single species that has been identified as having gone extinct from past Yellowstone eruptions. Nor has a single ice age/glaciation been caused by one.

I honestly think these super-eruptions must not be as catastrophic as feared, how else could they have failed to extinct a single species that we've identified?
edit on 21-12-2013 by rigel434 because: (no reason given)

posted on Dec, 21 2013 @ 11:07 PM
link
Already posted here and discussed Dec 11th. Please use the ATS search button before starting a new thread, and you could've added something to it instead. Thanx