A South Korean news agency reported Friday that the North has threatened to attack “without notice” in response to anti-North rallies this week — and that it sent the warning by fax.
It’s the latest provocation from North Korea’s young leader, Kim Jong Un, who, at 30 years old, was born not long before the fax entered its golden age of curling paper, thermal printing and shrieking modems.
The threat was sent by the North Korean military, according to the Yonhap news agency. It arrived, apparently without a paper jam, at the South Korean National Security Council.

Via FAX. You gotta love the technology. I imagine this is just more hot air from this regime but worth keeping a watch. 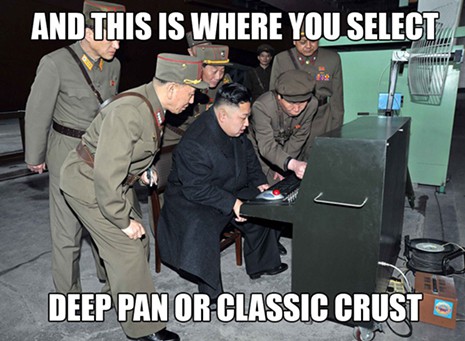 The military apparently condemned rallies by several conservative groups and North Korean defectors that took place in the South on Tuesday, saying they insulted North Korea’s “highest dignity,” referring to Kim.
The rallies were held on the second anniversary of the death of Kim Jong Il, the younger Kim’s father, who was known as the Dear Leader and ruled the North from 1994 until his death in 2011.

I wish they would stop talking about it and just do it.... More Sabre Ratling in the form of a Fax??? Is that even possible...


I would think that maybe the FAX would be a heads up no ? they need to get a good basket ball team working for them ..Oh yea ..


I would think that maybe the FAX would be a heads up no ? they need to get a good basket ball team working for them ..Oh yea ..


Dennis Rodman, the flamboyant former NBA star — whose own best years coincided with those of the fax machine — is in North Korea this week holding tryouts for a basketball team that is supposed to play NBA veterans on Kim’s birthday next month.

He told The Associated Press that plans are coming along, but he said he hasn’t convinced all of the players he wants for the American team that it will be safe to travel to the North.
“I’m just telling them, you know, don’t be afraid, man, it’s all love, it’s all love here,” Rodman told the AP after tryouts at the Pyongyang Indoor Gymnasium.

The NOW panel discuss the signs of internal instability in North Korea and if President Obama will pivot his foreign policy toward Asia in his second term.

Rodman and Kim Jong Un, famous for bad behavior of two completely different kinds, have struck an improbable friendship. Rodman visited the North earlier this year with the Harlem Globetrotters for an HBO special.

Rodman remains the highest-profile American to meet with the young leader, whom he has described as an “awesome guy.”

posted on Dec, 20 2013 @ 09:08 AM
link
While North Korea overtly threatens, the media focuses our attention on Iran.
I will never understand politics....

Maybe south Korea will get a list of there battle plans too
edit on 20-12-2013 by crazyewok because: (no reason given)


I think that NK is some sort of wild card tptb are holding that they will never really play unless it is on a basketball court ..

What would be even funnier is if they sent as a phone text message:

"We're gonna attack you without notice! "

posted on Dec, 20 2013 @ 09:15 AM
link
Maybe if he also got a decent haircut and kept of the Mars bars for a while people might take him a little more seriously! 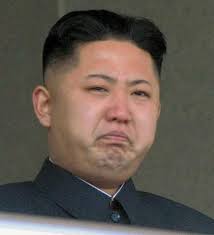 crazyewok
you send a warning that you are going to strike without warning ? O north Korea you so crazy!

Maybe south Korea will get a list of there battle plans too
edit on 20-12-2013 by crazyewok because: (no reason given)


lol...for once I agree with you ewok....that made me laugh too....if there is one country that the whole world needs to invade, North Korea is the one...I'd throw into the war bucket ten bucks for that effort

lol...for once I agree with you ewok....that made me laugh too....if there is one country that the whole world needs to invade, North Korea is the one...I'd throw into the war bucket ten bucks for that effort

You guys should load up a stealth bomber full of team America DVD's and drop them over the capital.
edit on 20-12-2013 by crazyewok because: (no reason given)

What frightens me is that he will start a war simply to prove himself to the world and his generals. When you are brainwashed to the point of thinking you are a descendant of a God, coupled with a complete and total lack of understanding how the world works = Lunatic.

He is one of those leaders who will have no issues sacrificing / murdering his own people simple to prove a point. Its reminds me of Hitler's attitude when the allies were closing in on Berlin. When the generals brought up the impact on German civilians Hitler took the attitude that they deserve what they get. With the allies closing in Hitler felt the German people / military failed him.

The downfall was of his own doing yet he was to arrogant to see that.

I think the same will hold with Un.

Question - With the recent changes in leadership, a 4th nuke test in the works and the latest fax to South Korea, are his actions / threats enough to justify something preemptive?

Is this one of those cases where if one of the plots to assassinate Hitler succeeded, would WWII have occurred?

If we topple Un, will the results be better than if he stayed in power and started a war that may very well go nuclear?

Also I noticed China has gotten extremely quiet / distant from North Korea. They have also lost some of their ability to control Un. If china loses the ability to influence / confront then this situation may be a lot more worse than we think.

China has moved large numbers of military / police units to the region of the DPRK- China border. They have stated the moves was to deal with a potential humanitarian / refugee issue.

If N. Korea has decided to break the truce and start a war, maybe those Chinese units are being placed not for humanitarian reasons but for a possible war?

Snarl
Sounds funny ... but the South is taking this one as a serious threat.

I dont blame them.

But it could always be a bluff and its best to be safe than sorry and go to alert. You are obviouly dealing with someone irrational and insane.
edit on 20-12-2013 by crazyewok because: (no reason given)

Somebody ate the Currier pigeon

posted on Dec, 20 2013 @ 09:27 AM
link
North Korea is just laughable. First of all they send notice warning they will not notify when they attack. Isn't the point of an attack to catch your enemy off guard? And then to top things off he sends it via fax.

Didnt you know? Dear leader invented the fax machine, along with TV, the light bulb, the wheel ect And electricty comes from his benevolence


I bet Rodman had something to do with this...

Seriously though it's only a matter of time for the Korean war to start off again. Kimmy boy will end sparking a world war I'm sure.