On Friday Dec 20, 2013, Emerson Falcao is set to take on Juliana Velasquez in a three-round full contact MMA fight in Rio. 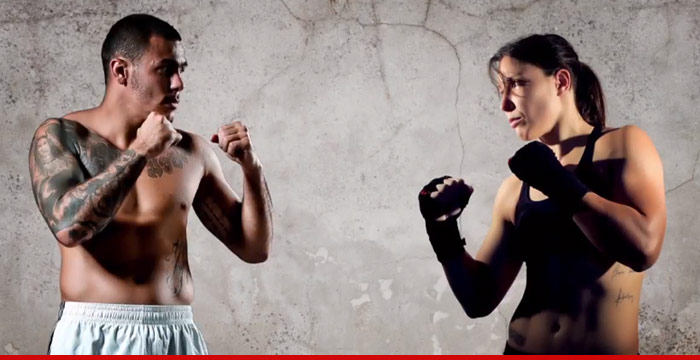 "Andre Pederneiras came up with the idea. He asked Team Nogueira for a female fighter and my team believes I'm ready, so I accepted the challenge. My expectations are the best. I'm well trained to get there and win. I'm used to training with man [sic] every day. I'm a professional judoka and I know the adrenaline of the competition, I know how to handle this."

Well, I think if Velasquez feels she's up for the challenge then go for it. However, a BIG however, if Pederneiras loses, well, career over. Also, this opens a huge can of worms in terms of men vs women. If this actually takes off and becomes more of a common thing in MMA fighting, then how will women perceive men in the years to come? How will men perceive athletic women? I mean, what happens to the 'moral' code of men hitting women when a woman is the aggressor?

As the rule stands, men don't hit women. Period. Doesn't matter if she smacks you, punched you, spit in your face, you suck it up and let it happen. So what happens now? What happens when a female MMA fighter breaks your nose? What happens when other women decide it's ok to take on a man? When does 'equality' draw the line? If a female boxer smashes you in the nose, what do you do now? Not that that's going to be a common occurrence. Or will it?

I can only imagine what would transpire if she kicks his ass and drunken Brazilian women in pubs feel the testosterone.
www.huffingtonpost.com... n_4463690.html


Emerson Falcao is a loser for even considering taking this fight. I'm all for equality in other senses of the word, but this crosses a line. What kind of man wants to fight a woman, period?

I love this sport but this stunt makes me want to puke and boycott. This is to sell tickets and advertising and nothing more. This does nothing for the progression of the sport.


Emerson Falcao can't beat a man so he fights a women... LOL


I know. What's going on in his mind right now? Why would he even chose to accept the challenge?

You just opened a can of worms.!
"My friend" told me about a night when his wife turned on him while she flew into a rage while suffering from post-natal-depression. "He" had to punch his wife in the head because she was coming at him with a knife as he was standing guard over their 11 week old son. So what ever about boy V girl in organized fights, you need to climb down of your high horse buddy. In real life, boy V girl, # happens.
Not pride, just a fact.

posted on Dec, 19 2013 @ 12:30 PM
link
Will this be on PPV? If so I am totally put $$$ on the chick. Wonder what the odds are in Vegas right now? There are many female fighters out there that feel that they are equal to or better than their male counter parts in the same weight division. Will be an interesting fight to watch that is for sure.

Link to alternative site since one in OP seems broken.
edit on 12/19/2013 by SpaDe_ because: (no reason given)

posted on Dec, 19 2013 @ 12:35 PM
link
Has anyone considered that its the girls choice to do this, nobody made her take this fight. She is confident enough in herself as a fighter and wants to do this.

Maybe she would be offended by people saying she Shouldn't do it.
I say more power to her and I hope she wins.

guess who won that one?


Nevermind took me a second.

I wanna see a feminist face when their "men and women are equal and women can be stronger than men if she wants" attitude gets knocked out in one punch.

At least it will show how double standard are not going to protect them like when police and justice department are not grovelling at their feet.

Reminds me of this boxing match when a female soldier decided to take on a fellow male soldier. Went down in like 1 hit, had to walk away and collect herself at one point. Lol.


As a fan of mix martial arts I'm kind of conflicted here. I do not doubt there are some female fighters out there that could take on a male fighter of equal size, but I do think it would be rare. A female fighter could not hope to overpower a male fighter of the same weight class, in the end it would come down to ground game. On the ground things are much more equal.
edit on 19-12-2013 by Openeye because: (no reason given)


I would have to agree with you. I can't imagine the PTSD as a result of a ground and pound in this match. For either fighter lol. I mean seriously? Could that be a possibility? I have to laugh over the insanity of it.


I have had my share of scraps. When I have been attacked by males, the rules are simple, either I knock my opponent down, or I go down. What ever tactics I use to get the enemy to either back down or fall down, are legit. Whether it's bludgeoning the living crap out of them, or fast, accurate strikes to critical areas of the body, which although effective for defence, minimise unnecessary injury, I don't give a damn, and that largely has to do with how the thing began in the first place.

Once or twice I have been attacked by women, but only once have I actually had to respond in any way other than evasively. My best friend got messed up on some bad drugs once, back in the day when we lived in this tiny little bedsit type place. The room was the size of a jail cell. It was technically her place, and I used to sleep on the floor between the bed and the cupboard. As you can imagine, both of us knew where the others personal effects were, because of the close confines.

Well as I said, she was all messed up, and found my lock knife. She had been pretty obnoxious and so on because of the narcotics, so she came at me with it, and when I fended her off, she made as if to hold it to her throat. I wasn't having my best friend take her self out with my knife, or anything else for that matter, and in an instant, I dove across the room, and put her in a mild choke hold, with my arm wrapped around her neck and her knife arm too. When she passed out, she dropped the knife, and I placed her in the recovery position, monitored her breathing, checked her pupil response to light and all that, and she was fine, waking up a little while after. Luckily, I was not drunk on the night in question, otherwise that night could have ended a whole lot worse.

Also, an ex of mine (so a different lady, for clarities sake) had a cutting issue. On one occasion she had behaved rather poorly toward me during a night out, and I guess she felt guilty about it, because later on that night, she went to the bathroom and came back bleeding from her thigh. She had cut pretty deeply, and she gave every impression of not being quite done. When someone is harming themselves, and you care about them, it might go against the psycho babble, but I believe that when you care for someone, you do not accept any behaviour, from anyone that harms them, even their own. She made it pretty clear that if I tried to prevent her from doing more harm, she would try and do something really dumb, if you know what I mean. I performed a wrist lock disarm on her, which was so rapid that she did not have time to react before I had taken the scissors she had in her hand, and buried them in the grain of her wardrobe, beyond her ability to remove them without tools. This gave me time to calm her down, clean her wounds, dress them, and I watched over her all night.

I have never had a reason to strike, nor cause long lasting damage, or even significant bruising or pain, to a woman, no matter how fraught the circumstances. I have always found myself capable of defusing a physical confrontation either using psychology, physical evasion, or by selecting physical tactics which minimise damage, and maximise the safety of both parties, while removing the threat to my physical self. That is an option which I hope to always have in any such scenario, although I accept that there may be circumstances which would fall outside of my ability to defuse in such a way. If a well trained female intended to destroy my face, and proved beyond my doubt that she was capable of it, I suppose it is possible that I would respond commensurate with that.

I would certainly never seek to discover the results of such a thing. To deliberately engage in such a contest is unfathomable to me, and goes against every belief I hold about decency and gentlemanly conduct.


"What kind of man wants to fight a woman, period? "

In general, any man with the last name of Brown....such as Bobby and Chris.....


Boys and girls train and fight in jitz and other martial arts for years until they hit puberty. That's where everything changes.

Testosterone is the aggression hormone, androgenic & anabolic, it makes people aggressive and allows better endurance and explosiveness from muscles. Unless a woman is supplementing with male hormones it is really unfair to some degree.


You raise some interesting questions in the OP about violence and sexism, but, I think some of that needs be put in perspective that most violent crime is already perpetrated against women already.

Certainly there's some social issue questions this match might bring to fore.
Further, there's a distinction to be made between well trained athletes putting on an exhibition sports competition display and real life.
Some people can't tell the difference, or seem to have a difficult time in doing so.