The space itself has a surprising number of amenities. There's a king-size bed, an oversize shower, a fully-functioning kitchen, including a double-basin sink, oven, and stove, plus a living room area with seating for two, a washer and dryer — and plenty of storage.


It seems to have everything a person would need, and her monthly expenses only come to $250/mo. That's playing it SMART!

I could live here, if I had to. I only need a bathroom, place to sleep, cook, and a computer hookup so I can get on ATS. The laundry area is an added bonus; I'll take it!

This is a great idea for all those people who think they could end up on the street due to loss of a job, foreclosure, etc. A great way to survive off the street until you are able to do better.

She did most of the work herself. I'm impressed! You go, Macy! 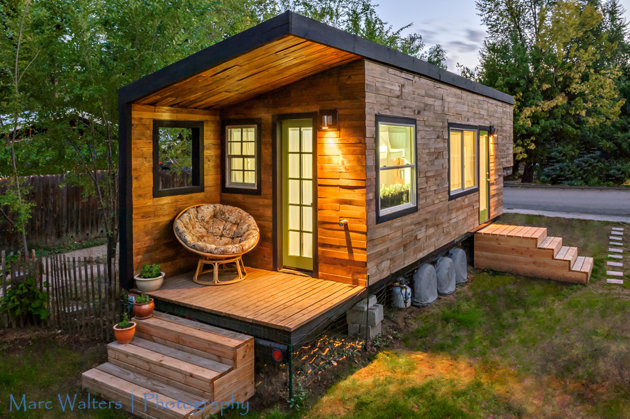 After dealing with a messy foreclosure, the 30-year-old sought a way to have a place of her own while avoiding the mortgage trap. Her solution: Build a micro home.

"I wanted a way to escape dependency on banks without being a 'renter,'" the Idaho resident told Yahoo in an email. "I like having my own space to make my own, which is difficult to do without taking out a large mortgage."

Miller began to build a 196-square-foot house in 2011, right on a flatbed truck. The cost: $11,400. The handy Miller did most of the work herself, with advice from her friends and father as needed.

posted on Dec, 18 2013 @ 03:49 PM
link
I Like it a lot.
A sensible second part is to allow each person born a free allotment of land where they could install such house. No one need go without place to live again.


So glad you posted this...im a huge fan of tiny houses, small cabins, small yurts. I have recently been considering building a yurt in the middle of no where and trying to live off grid as much as possible with solar panels and green houses. These look so much better although if you google yurts there is one with a glass ceiling and a suspended bed that is just beautiful. Ill try to find it when I get some time.


Now wouldnt that be a wonderful thing.

posted on Dec, 18 2013 @ 04:00 PM
link
I know someone who seen the plans to make one of these and thought it was a cheap good idea..needless to say they have a torn down camper sitting in their back yard right now and have pretty much given up on it..aside from the claustrophobia aspect its kind of a neat idea..if you can follow through that is

The initial investment may be higher, as compared to things like welfare, food stamps, etc. However, the long term costs may be drastically less, and the real world value much, much higher.

This is similar to the idea I proposed in this thread, as part of a larger series.

Not only could it reduce costs in many ways, it could directly enable people who struggle to get by to actively contribute to the world around them. Especially if we build the technology with all of that in mind (independence, self-sufficiency, etc).

posted on Dec, 18 2013 @ 04:05 PM
link
The 'tiny house movement' has been around for several years now. A quick net search will turn up tons of ideas, and Reddit has a tiny house subreddit with a lot archived.

Also see 'Kirsten Dirksen' on Youtube for several years' worth of videos she's done all over the world with similar ideas.

The problem always returns to the cost of land and zoning ordinances. God forbid you should bring down the property values of the idiot next door's 5000 SF house.. Personally, I think if you want to stay in the United States of Insanity, buy a regular house, rent it out, put your 'little house' in the backyard and let the renters pay for the whole cabosh. Properly sited and kept under 200 SF, and it will be ignored as an accessory structure. I did much the same thing for a while with a yurt in my backyard. From the road it looked like a UFO had landed because of the skylight and people still totally ignored it.

It's a half fancy trailer or mobile home, what say you, which have been around since Lizard People. They are just as reasonably priced to buy one already built. American society cracks me up though, if you buy one and live in it, your viewed as trailer trash. You build one on your own and your a modern, micro-home building genius. The construction is not even that great, anything looks good with overly warm lighting and a good DSLR camera.

posted on Dec, 18 2013 @ 04:13 PM
link
Kind of pricey for a glorified trailer. If you like the concept check out Facebooks Living off the Grid or a friend of mine has a site Tiny House Ontario www.tinyhouseontario.com which highlights very small homes in Canada and internationally. There's some great concepts to be gleaned from both sites.

Basically it's a hipster trailer park?


Yeah this is a great idea. SnF. There is a company that also repurposes unused shipping containers. inhabitat.com... they make some pretty awesome structures out of these things. You can spend as little or as much as you want.

posted on Dec, 18 2013 @ 05:34 PM
link
I love the tiny house movement and would absolutely live there.
Have seen better, but for such a small price, it's pretty good.
Perfect actually.

posted on Dec, 18 2013 @ 05:36 PM
link
Tis a wonderful idea for an office, or a guest house, but families, of 4 or more need 2000-3000 square feet, more for an aquaponic greenhouse, and there is room on earth for all people to have their own tax free, owned by them, several acre farm, since they stand shoulder to shoulder in LA, with plenty left over to preserve. IE agenda 21 will go away. (sung to a christmas tune!).

They can take a leap!

We already do that. They're called trailer parks and they're subsidized by welfare.


The Japanese are masters of this technology or micro living. They have some very innovative stuff.

I wish I could remember the name of the contest, project habitat or something like that, but it is usually held every year. Teams compete from around the world. They have strict rules for size, off grid, etc etc. They have several categories.

It was made into TV show and it was awesome. To watch these teams build these babitats and the amazing homes they built and cheap. It makes you wonder why does everyone not have home of their own.

Greed is the only answer... I say bill Gates, that is worth doing and how about starting where you made your money, here. I am sorry for poor African people but hello, there are people in need here in your own country lol. Help those here first and then go there.

I often get upset thinking about that, they make their billions here but rarely help anyone here. Drives me crazy.
I am sure some members here whose memory is not failing will help with the contest and show, it was awesome.


Good idea here, one of the better things, it's a trailer and needs no building permit.
The county can suck it!