Barbara Walters on Obama: ‘We Thought He Was Going To Be The Next Messiah’

PIERS MORGAN, HOST: You have interviewed every president of my lifetime. Why is Obama facing so much opposition now? Why is he struggling so much to really fulfill the great flame of ambition and excitement that he was elected on originally in 2009?

BARBARA WALTERS: Well, you've touched on it to a degree. He made so many promises. We thought that he was going to be - I shouldn't say this at Christmastime, but - the next messiah.

I remember during President Obama's first election people were calling him Obama Messiah and the masses were just about ready to pray to him. With all of his broken promises and lies, you would think the people of the US would have woken up but alas they were fast asleep in la la land and voted him in for a second term.

It's also worth noting that this came the day after the Washington Post said Obama was responsible for three of the top ten biggest Pinocchios of the year, and five days after PolitiFact awarded him the Lie of the Year.

With his current record of lies and lawlessness he will probably find a way to get even a third term.


This topic has been chewed to pieces. There are already several thread discussing the messianic rumors regarding Obama.
edit on 18-12-2013 by AfterInfinity because: (no reason given)

posted on Dec, 18 2013 @ 09:41 AM
link
It's more than a little sad that somebody as connected and as old as Walters having been a journalist for decades could still be duped by a politician.

She has the experience, she has the information, she has supposedly been paying attention and in all this time she has learned absolutely nothing.

Sadder still is she isnt alone in what I can only assume must be intentional and willful ignorance.


You know what I find sad? We're more excited about waiting for the "Messiah" to do something than getting up and doing it ourselves. That's what's sad about this.


Get used to the lies and lawlessness.....He will probably be the president for his entire lifetime....He will just change laws around to make it possible (won't be the first time!)

Messiah? Oh my oh my......People just throw that label around like it is meaningless.....He is a joke, the wrong label is being used for this evil man....He cares ONLY about himself, that is about as far away from the label Messiah as it can be!


You know what I find sad? We're more excited about waiting for the "Messiah" to do something than getting up and doing it ourselves. That's what's sad about this.

I will vote for you in the next election, but ONLY if you're running as an Independent.


She may have thought that particular sentiment about that guy...but this guy sure didn't think so. I remember that year like it was yesterday. The vivid ads putting that scumbag up on a pedestal and treating him like he was something real special. All the brainwashed idiots falling for his well-rehearsed rhetoric. The countless number of people that actually believed what he was saying. Almost as if he wasn't a pol-i-tick. Absolutely pathetic. Thank God not everyone felt that way.

It is ashame the majority of people did fall for it hook, line, and sinker. TWICE!

And then there is Barbara. Wow, what a way to generalize the public. I mean, I know that alot of people thought that highly of the guy but to say "we" as if she speaks for the nation is quite telling. She must think everyone believes what they see on the TV, and they all just follow the pack. Of course seeing what talk show she was on and the people around her...well she probably really did think he was special. And for that I will put her in the same category as the rest of the people who supported that clown.

No sympathy for them. They can cry me a river waa waa waa

I also thing those claiming his the anti christ are also as stupid.

He is just another crap Human politican that all, and Im sure the next fool you vote in will suck just as bad.
edit on 18-12-2013 by crazyewok because: (no reason given)

Does that apply here? Is Walters saying she literally thought Obama could be the "messiah?"

I was under the impression the term was being used figuratively.


Even here where I live, China, people thought he was going to be someone special compared to the usual leadership in Washington. It didn't take long for many here to see him for what he is yet the people of the US voted for him again.

I saw him for what he was and is, a lier and panderer, promising and telling the people what they wanted to hear with no intent of ever keep a promise. Truthfully Barbara Walters has no excuse, she has seen and reported enought to know better.

posted on Dec, 18 2013 @ 10:12 AM
link
I'm surprised we're even listening to Barbra Walters! Like Frank Sinatra, she has zero talent in the career money bought for her. She has made a pretty good agenda tool through the years, though. Some people actually think what she says holds some weight, from what I've heard.


In his farewell speech on January 17, 1961 President Dwight D. Eisenhower " warned the American people to keep a careful eye on what he called the "military industrial complex" ". Since then it appears that the position of POTUS, whether Democrat or Republican, has morphed into a figurehead serving the interest of TPTB.....

Who's Minding the Store


In his farewell speech on January 17, 1961 President Dwight D. Eisenhower " warned the American people to keep a careful eye on what he called the "military industrial complex" ". Since then it appears that the position of POTUS, whether Democrat or Republican, has morphed into a figurehead serving the interest of TPTB.....

Who's Minding the Store


Tragedy and hope, a book by john quigley, influenced the john birch society and people like bill Clinton heavily.

The two parties should be almost identical so that the American people can "throw the rascals out" at any election without leading to any profound or extensive shifts in policy.

Either party in office becomes in time corrupt, tired, unenterprising and vigorless. Then it should be possible to replace it every four years by the other party which will be none of these things but will still pursue, with new vigor, approximately the same basic policies.

Funny, how the above seems to be the exact thing that has been and continues to go on, the reasoning the book gives is that in a nuclear age democracy is dangerous as the whims of the people can lead to nuclear war... So control of political opinion is needed through the two fake parties.

Keep in mind this isn't idol chatter from a nut, this is from a book that has influenced politics and organizations for years.

And she probably helped beat the war drums for that consummate ass-* Bush the Lesser.

And she 'couldn't believe that the government would be involved with 9-11' even though any idiot looking at the buildings explosively turning into dust would know instinctively that that's not what a gravity collapse would look like.

Why are these morons given microphones?


God I hate people like Barbara Walters. "I shouldn't say this during Christmas time..." shut the f*** up you wrinkled taint sack.

First of all, no one should say that ever, not for religious reasons, but because it's the most ignorant statement anyone could ever make.

Secondly, as if saying something as stupid as that is any better or worse during Christmas time. Totally reflects the "Christmas-Christians" attitude. Aka, Christians who are only Christians around their respective holidays. Christians who go to church twice a year or not at all. Which, I don't think going to church has anything to do with being a Christian, or anything else for that matter, but that's besides the point. Walters is reflecting this ignorant attitude with that statement.

Lastly, if ANYONE thought that a new American President was going to change ANYTHING, then they should be loaded onto a spaceship and shot directly into the Sun. The last president that tried to change something got his head blown off in public by the CIA. The President controls NOTHING, he is just as controlled as we. He's a poster boy, an image we can blame, relate to, and pray to apparently.

This country makes me sick to my stomach. I can't wait until we collapse like the roman empire so I can have an excuse to be a rampant vigilante.

That statement by Walters isn't meant to reflect her ideals. When she said "we" she meant Obama's supporters. Most likely clueless idealists who don't know that Republican/conservative vs. Democrat/liberal is a false dichotomy. Walters, a part of the media/politics machine for more than 40 years certainly knows this, and has played the game expertly. Of course, her influence with the general public isn't what it used to be in the 70s, 80s & 90s--we have younger people doing the influence thing now--but she played a major role in shaping the opinions of most people who are over say, age 50.

Regarding the general public--thanks to the media--we have the attention span of exactly one administration. Over the course of the time that I have paid attention to Presidents and politicking (starting with the public ridicule of Jimmy Carter), I have been aware that presidents are preselected, packaged and sold to us as a panacea for whoever the outgoing President is. And at the end of every administration, we somehow fail to understand that each one is going to promise the moon and give us dust.


Even here where I live, China, people thought he was going to be someone special compared to the usual leadership in Washington. It didn't take long for many here to see him for what he is yet the people of the US voted for him again.

I saw him for what he was and is, a lier and panderer, promising and telling the people what they wanted to hear with no intent of ever keep a promise. Truthfully Barbara Walters has no excuse, she has seen and reported enought to know better.

True, and where do you live in China? My home city is Harbin, in the province of Heilongjiang.
But not to change the subject, My old work friend's I still know and talk to in the CPC in Beijing, Believed American's to be more Gullible than previously believed when they voted for him.
But of-course the CPC had better intelligence on Obama than the average American, but when people here in America tried so hard to get the information out to the public, they were called Racist and Obama Haters and other things I won't mention here.
Like my husband say's, This is what Americas gets when you vote on the promises of future words and not on the performance of past actions. 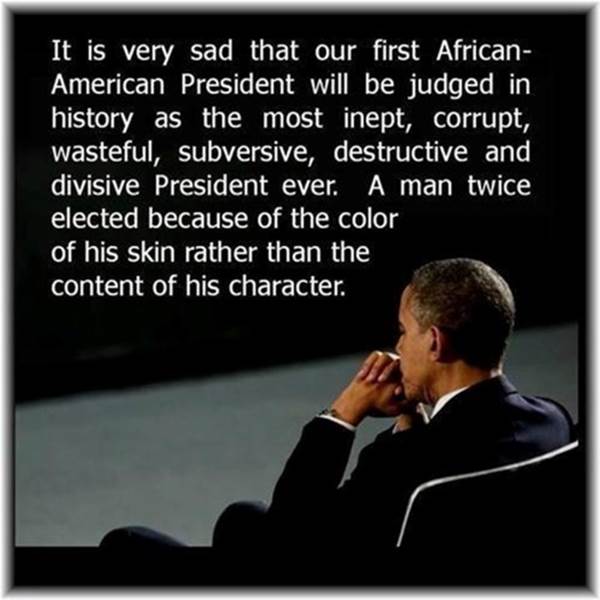 
I think he wasnt even elected based on his skin.

I mean he ran against McCain, My cat could probably run against him and win

Like the UK you guys seem to have to make a choice every election between a douche and a turd, how ever you vote your screwed.