This thing has been in the works and on the cards for some time now. It's hardly new!

It was even featured in an episode of Future Weapons!


Yes I remember hearing about it a while a go, what is new is that it is complete and ready for sale! I hope our cousins across the pond are prepared...


Its been used in jails since 2010 in the states, as the third link in my previous post will attest. Therefore it has been for sale to counties and states already for some time, as I pointed out.


Ah, my laziness at actually reading the posts are shown hahaha Perhaps it is new in the form of this 'tank truck' for better use of a word!

From what I recall of the ADS, it was always designed to be deployed from a vehicle of some sort, and since it is a fairly bulky bit of equipment, you would assume that the wheels it rides on would have to be sturdy as well.


Well I'll be damned, there it is!

I'm surprised that this week has been the first I've heard of it.


All I can say is that I am glad I am not living in the USA. From all the stories I read and see over here and on the (independent) news, it looks more and more like a third world country. Totalitarian regime with banana-republic antics from a large part of the population.

But yes, the microwave weapon for crowd control is scary, but I have read about it about 5 years ago. There is also the sonic weapons for crowd control. Makes one wonder about a future society. Protests are a way of making the government seeing that people have different opinions. If you take that away, by holding them in fear, the protesters will just turn to more underground and violent means, like planting bombs, etc. Of course, then the government will retaliate with even more means, and it ends up in a never-ending spiral of violence.
edit on 18/12/2013 by Hellhound604 because: (no reason given)


...and then think how long this weapon was in the planing before roll out...how long they have been prepping for this rise in social conscience and to control and avoid any form of wider social maturation? If you look at the d/a/r/p/a homepage you can almost predict what the the future will hold. I remember seeing the Microwave weapons issue come up at least 10 if not 15 years ago, everyone thought we were mad and laughed us off when we said it would be used socially. They're not laughing anymore. Almost everything we said we saw coming back then was laughed of and is now in plain sight, from DU in Iraq to the Libya con, to Prism.

This seeming 'emerging' social control dynamic goes a long way back and goes way beyond civil rights in the US. This long game isn't about installing a dictator in the USA though it will start there, already has, this is about global control, of everything and everyone, as one. The only way you can have global control is to own the sky. Much like "conventional war" today, once you do that, then you need to take every political body and every market hostage with news of what you can do. You dont even need to be able to do what you say, just infer you can or that someone else already has this power, like Einstein did when he wrote Roosevelt saying (a lie) the Germans had the Abomb, and so you create enough fear and generate enough doubt that people are forced to retaliate, predictably as they do which only condemns them faster, or to act as you want them to, or capitulate entirely. Those are the only three real options if you play their game. Religion's been doing the same long con for centuries.

A critical review of just one military contracting agency and you can estimate for yourself the eventual 'social' uses of things like BigDog and newer robotic land based drones that can out run a human and most cars; of that hypersonic shuttle that can now drop anything on anyone from just about anywhere with nearly zero prep time, not to mention the power to shift and motivate an individual or the collective psyche through sound, false flags etc. Even if they are unsuccessful, the message of threat still gets in and sits in peoples heads making them easier to control This doesn't even take into account a scratch of their capacity to shape ideology, globally.
For instance, the entire concept of TIA and aggressive pre-emptive strike that is now widely accepted especially by people in the USA. This concept became doctrine became practice very quickly, it undermined and replaced every core value and action of international co-operation and collective reason undertaken since ww2. It did this in less than 20 years. This doctrine is now systematically legitimized legally as much as socially, rather than seen as the abhorrence it is and was even just 2o+ years ago, the LARDs are just the tip of a very large iceberg. Even if the intentions of every researcher on every d/a/r/p/a project are benign, whats to stop misappropriation?

I'm in Australia too, but I am not naive enough to think this is an 'over there' problem. Our nation has already been socially and politically 'pacified' according to a 1978 document from the CIA. It's only gotten worse since then, we have been engineered collectively to be right where they want us. Racial tensions, political absurdities, economic insufficiency and we are now almost totally dependent on external manufacturing and a few large corps. We are the little emperors, the fattened calf, but only for as long as it suits them and no more. We can see already this ego is deflating now, reality sinking in as industry after industry pulls up shop and leaves. They're not dumb they see it coming too.

Whats more, there may only be 1200 marines on the ground, but we have 87 US military facilities already in active operation here. We and the Philippines are the US/corporate gods launch pad for the South China Sea.
Our, cough, the US army and navy's satellite tracking, OHR and VLF set ups operating here, are already being used to murder people in Yemen and Oman and to support NDAA etc etc et al . We are already 'there; and we are already a target. Do you think if it boils down to it, that China is going to risk failure trying to target US bases when it can knock out most of its comfort zone and below equators coms by hitting us?

I know its hard to really see whats right in front of your eyes but only a few years ago the entire country here watched as local and federal police combined and rushed a line of unarmed civilians, in peaceful protest exercising their civil duty not just rights in Swanston Street. Most Australians didn't bat an eye at this abuse of police and council power used ' only against the 'hippies'. And now, after years of working with bikers, suddenly the old and quite expansive laws that could have taken these groups out anytime are gone and we have whole new search and seize and congregation laws that mean no one the police decide in future they alone deem unworthy will be allowed to meet in public or "associate" in groups of more than three. Again not a blink as its 'only those bikers'. We already have ' free speech zones' at Parliament house....how much more like the US do we need to get before we realize its not just them, over there? Most Australians just don't see these things for what they really are as its covered up between Neighbors and shopping, between drinks and flashy advertising. Our toilets still flush and we can still, for now, pay the electric bill.

What you see 'over there' is right here right now. Just take of its 'pleasing' pretty hat and look at it. This is not about dreary world views and sad perspectives on humanity It is a nod to the con, an awareness of what actually is in front of me over what I wish it was...which is a really nice bubble to be in but eventually, if you want to affect real change, then that membrane needs to pop too.


They're only doing it for the children.


And If you don't do anything wrong, you have nothing to fear. My two favourite phrases from the totalitarian mouth pieces.

I could go on really but take a look at my Iridium Thread. I could link a handful of posts on here easily to that iridium thread. This been one of them.
Google and robots is no coincidence though is it really.
The war really is between darkness and light because of its frequencies. 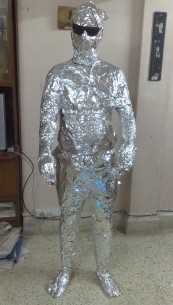 lol ty for posting this, laughter and fear-less-ness really is the only way to win.
The thing about seeing what is for what it is, is that you get to see a little bit of what ELSE it is

posted on Jan, 17 2014 @ 08:04 PM
link
Aluminum foil shielding might be enough. Cardboard covered with it might be good enough to cover the face and upper torso at least. A fine enough wire mesh might even work, and would allow for visibility.

Any crowds sizable enough could counter with duct tape as a secret weapon and spider-webbing or cocooning those that forcibly oppose them into human shields for their protests. (No roughing or beating up necessary - and it would be counter-productive, just something like a 10:1 people ratio immobilizing and "arresting" for a different purpose.) Dunno if riot-police would like the idea of zapping, tear-gassing, or beating on their own (which is why they should be kept unharmed other than dignity - and you know they'll be raging mad with the possible sharpie treatment and beer shower) as they're carried about like a silver-straight-jacketed and unwilling crowd-surfer. Suspected plainclothed plants trying to cause trouble could also be subject to the same. Such tactic must make it obvious that any real pain or injury they suffer comes from their indiscriminantly acting fellow officers.