posted on Dec, 17 2013 @ 01:29 PM
link
So, China recently landed a Rover on the moon, something that the U.K hasn't even considered, yet according to figures coming out of the Department for International Development we still gave China £27.4million in aid in 2012.


Britain is still giving China millions of pounds in aid even though the Communist superpower is so wealthy it has just sent a rocket to the moon.

Official figures seen by the Daily Mail reveal that Britain gave Beijing £27.4million last year – making a mockery of ministerial assurances that the programme was to stop.

I really cannot see the justification for giving the world's second largest economy a penny of our hard earned taxes, but the U.K Government certainly seem to think there is. Unfortunately, they haven't yet explained their justification, but apparently it is related to combating Global warming and assist with economic growth.

There has been an awful lot of coverage of our Prime Minister, Chancellor and other Ministers visiting China over the last few months and I wouldn't be surprised that the money given to China was as a nice sweetener in order to boost trade links and ensuring China invests heavily in British infrastructure programmes.

27.4million in today's world doesn't seem an awful lot, but according to the article it could pay for 1000 nurses. It could also go towards other frontline services that have experienced massive cuts over the last few years.

Whilst the advent of food banks in a civilised country should bring shame upon the people holding the purse strings, it appears they do not care one bit about the people they are in post to serve.

I think there needs to be an explanation in the house for the reasons why we have paid this amount to China, along with assurances that there will not be a repeat in future, but I won't hold my breath.

posted on Dec, 17 2013 @ 04:17 PM
link
I recently saw a list of countries and how much the UK,gives them in aid money and it's staggering and yet our country is full of cutbacks constantly. China certainly doesn't need our aid if they spend it on going to the moon even though it's a good achievement for them. .

posted on Dec, 22 2013 @ 07:42 AM
link
Am telling you....you don't give Aid without returns , its not free money ...Aid is always given to poor countries in exchange of defense deals , economic deals etc... and when it comes to countries like India and China these are payed to NGO's who are primarily responsible for causing religious, secretarial tensions and trying to stop development with sad excuse of "environmental concerns" .. There is no free Aid money, Britain is not run by morons , they know what they are doing ... 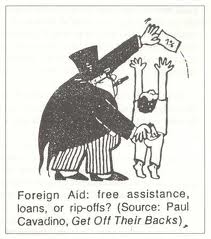 The principles of foreign "aid" explained by John Perkins


You are quite right in that it would be used as a "sweetener" for trade deals which actually benefit the UK by several orders of magnitude in the return investment, creating jobs.

The Mail, of course, isn't spinning it this way as they like to paint a picture of us giving money away to people who don't need it.

That said, had the Tories managed to get into Government without the Liberals, they probably would have cut the International Aid budget, rather than having it "ringfenced" as part of the Coalition agreement.

On the subject of ringfencing, as you mentioned Nurses (as did the Mail), the NHS budget has not had any cuts to it either and has been ringfenced. Since 2010, the budget has actually been increased, not cut. They don't tell you this in Daily Mail orientation, though.