kiko83bg
In the future: Google presents Home Earth where robots sneak in houses and film Street View-like images of their interiors.

Microsoft has beat them to the punch. They are doing it now with the Xbox One..........it watches everything going on in your house.


Sure. The best way for Israel to get its hands on U.S. tech is to buy it.

Skyfloating
one can't help but think that Google qualifies as a potential candidate for the Big Brother in a total-surveillance-and-control nation called Dystopia.

My thoughts exactly...
Google will soon be manufacturing police robots who will know everything you have ever written on the net,all your website history,all financiaql transactions,all your movements-and no doubt they will probably soon incorporate the new thought reading technology,which is only now in its infancy,yet pretty damned creepy IMO.

I for one will not welcome our new cyberrobotic AI google police overlords.
Extremely
edit on 17/12/2013 by Silcone Synapse because: (no reason given)

posted on Dec, 17 2013 @ 12:08 PM
link
Google (today) are not an evil company ..they are nosey and greedy but that is the nature of the beast.
Google (tomorrow) may be a different matter though.

Dont want to get too whipped up by this, but for me, this is analogous to seeing Dr Frankenstein out shopping and noticing his trolley has a lightning conductor, various convict body parts and some goggles for Igor in it.

It's like working at the Death Star factory shop when a certain Mr Palpatine asks to come for a look around or Sauron commisioning "some rings for a few of his friends"....

At the time of comprehension you have your doubts but then you look back on it and think how could this happen.

I honestly dont believe PetMAN, Big Dog or anything else would be useful to the general population as a whole- unless it has a machine gun mounted mounted on its back.

I've seen Robocop and anyone who thinks it didnt provide one of the most accurate portrayals of societies current commercially led decline needs to watch it again.

More observational works such as Terminator, Minority report, Westworld, I robot etc etc...it never seems to end well and at some point in those imaginary scenarios there was probably a moment akin to Google buying Boston Dynamics.

One of the scariest things I ever heard.

Humanity might have one chance...one man alone in 2050 ,striking back against the machines during Android Hershey Bar 97.4 OTA update....it could happen.
edit on 17-12-2013 by Jukiodone because: (no reason given)

EMP Guns could be a real future investment.

To me, it seems like their making an investment. Robotics is soon to be a hot industry. If not already. There is A LOT of money to be made when it comes to robotics, AI technology, etc. Technology always yields a heaping pill of money. So it's no wonder why a information and technical company is going after robotics.

So, it seems to me their just try to make some more money and start to kick start the robotics industry a little more.

Could there be a modern day Skynet? Maybe, but I would picture other people aside from google behind that. Plus we're a long ways away from that threat. The robotics industry is still pretty young. But I don't know, maybe it could happen. I guess anything is possible..

What happened to Brazil? The POTUS googled it.
edit on 17-12-2013 by thisguyrighthere because: (no reason given)

Lingweenie
Could there be a modern day Skynet? Maybe, but I would picture other people aside from google behind that. Plus we're a long ways away from that threat. The robotics industry is still pretty young. But I don't know, maybe it could happen. I guess anything is possible..

A modern day skynet is being built before our eyes.
All the parts are fitting together.
But not for our good.
The few will control the many.

Our Imaginations are becoming reality.
That ability,seemingly unique to us Humans on this planet,is both our best virtue and our downfall-for we can imagine some beautiful or horrific futures.

We make our own future by thought alone.

I do not trust Google with this at all. So now, Google is a defense contractor? 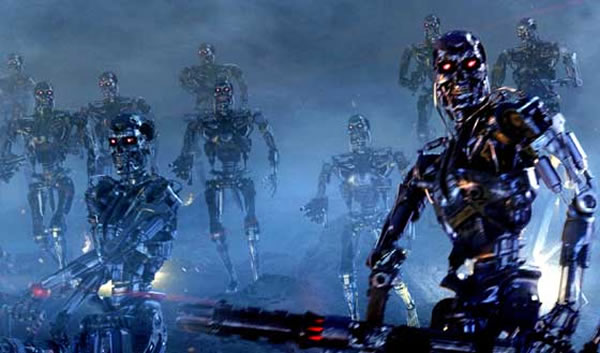 Microsoft has beat them to the punch. They are doing it now with the Xbox One..........it watches everything going on in your house.

My paranoid mind imagines that Google, Microsoft, Facebook, Amazon and Wikipedia are secretly all the same company.


projectvxn
they are on the leading edge of technological development.

Thats true and also great. But they also know more about you and your thoughts than your own spouse...if they wanted to retrieve that information, they could.

Theoretically they also OWN every powerful Person, Politician, Entrepreneur, CEO, Banker, who has ever typed things into Google they wouldnt want the public to know about.

Somewhere down the road...say a 100 years from now...having all this knowledge could prove dangerous.

I think that down the road has already arrived. You're right about the idea of retrieving information on every single one of us. Think of how powerful J. Edgar Hoover became after creating files on every politician he could. What Google can do makes J. Edgar look like an ant on a mole hill.

Rezlooper
Think of how powerful J. Edgar Hoover became after creating files on every politician he could. What Google can do makes J. Edgar look like an ant on a mole hill.

This is a really good point. Especially against the "If you don't have anything to hide, you have nothing to fear" crowd. Having private information on Billions of people IS power and its only a matter of time until someone less friendly gets their hands on it.


Thing about it is...J. Edgar had to work at it for over 50 years, but with Google, every single one of us just hands over our secrets every day with every site we visit using Chrome, search we make, post we make on plus, video we upload to You Tube. They have smart phones, satellites, and even have photos of the front of your house on Google Earth. It's simply incredible and all this in less than fifteen years.

I don't have smoking gun evidence, but I have been watching google, how it operates, the moves the company makes and stories about it and ; though it is still speculation on my part, I am convinced they are nothing more then a private sector front for the government.

They have ties to the CIA and NSA

Ties to the CIA and NSA In October 2004, Google acquired Keyhole, a 3D mapping company. In February 2004, before its acquisition by Google, Keyhole received an investment from In-Q-Tel, the CIA's investment arm.[82] And in July 2010 it was reported that the investment arms of both the CIA (In-Q-Tel) and Google (Google Ventures) were investing in Recorded Future, a company specializing in predictive analytics—monitoring the web in real time and using that information to predict the future. And, while private corporations have been using similar systems since the 1990s, the involvement of Google and the CIA with their large data stores raises privacy concerns.[83][84]

In 2011, a federal district court judge in the United States turned down a Freedom of Information Act request, submitted by the Electronic Privacy Information Center. In May 2012, a Court of Appeals upheld the ruling. The request attempted to disclose NSA records regarding the 2010 cyber-attack on Google users in China. The NSA stated that revealing such information would make the US Government information systems vulnerable to attack. The NSA refused to confirm or deny the existence of the records, or the existence of any relationship between the NSA and Google.[85]

Leaked NSA documents obtained by The Guardian[86] and The Washington Post[87] in June 2013 included Google in the list of companies that cooperate with the NSA's PRISM surveillance program, which authorizes the government to secretly access data of non-US citizens hosted by American companies without a warrant. Following the leak, government officials acknowledged the existence of the program.[88] According to the leaked documents, the NSA has direct access to servers of those companies, and the amount of data collected through the program had been growing fast in years prior to the leak. Google has denied the existence of any "government backdoor".[89]

They have ties to NASA

Google has worked with several corporations, in order to improve production and services. On September 28, 2005,Google announced a long-term research partnership with NASA which would involve Google building a 1,000,000-square-foot (93,000 m2) R&D center at NASA's Ames Research Center. NASA and Google are planning to work together on a variety of areas, including large-scale data management, massively distributed computing, bio-info-nano convergence, and encouragement of the entrepreneurial space industry. The new building would also include labs, offices, and housing for Google engineers.

Google executives received an unfair and inappropriate discount on jet fuel purchased from the government for personal flights on their nine private aircraft, according to a report released on Wednesday by NASA’s Office of the Inspector General. For six years, H211, a company that manages aircraft owned or leased by Google’s founders, Larry Page and Sergey Brin, and its chairman, Eric E. Schmidt, paid between $3.3 million and $5.3 million less than market rates for fuel supplied by the Defense Department, according to the report. The arrangement resulted “in considerable savings for H211 and engendered a sense of unfairness and a perception of favoritism toward H211 and its owners,” wrote Paul K. Martin, NASA’s inspector general.

The arrangement began in 2007, when Google executives started leasing space at Moffett Field, a former Navy base that is minutes from Google’s headquarters in Mountain View, Calif. and is managed by NASA’s Ames Research Center. H211 pays $1.4 million a year to rent 70,000 square feet, where it stores the Google executives’ nine aircraft, including a Boeing 767, two helicopters and a fighter jet.

Then you have the google barges that were built in Hangar 3 owned by the Navy and sub-leased out by San Fransico.

Although Google has not confirmed any projects on Treasure Island, which is owned by the US Navy and subleased by the city of San Francisco, ample evidence suggests that the company is behind whatever is going on inside Hangar 3 and on the barge at the southeastern end of the island.

Really, rooting around for all the government connections to google could take a whole thread in itself and probably has more then once on ATS.

Sorry for the super long post, but I would say I am at least convinced Google==DOD.

And really it would be a brilliant plan. If the government tried to build a total surveillance and control grid people would probably stop it, but if they break the project up, farm pieces out to a host of companies and then use one company; google, to acquire those companies and gather all those pieces into one complete system under one roof, people may see it, but probably won't stop it.

And now they are bringing DARPAs bots under the umbrella.

And to the elite I have to say "well played sirs, well played."

just my opinion though

edit on 17-12-2013 by prisoneronashipoffools because: (no reason given)