You don't want to do this.. What happens when you stick your head into a particle accelerator?


Trust me I wouldn't dream of trying it.

I'm just wandering...if it's not a good thing...even a short brief period of exposure in the particle accelerator could have permanent damage if not kill you.

Obviously I am missing some info on scale and numbers (duration of flight)...but...never the less...would we willingly go through the Van Allen belts...if we knew about this before ?

Maybe some science guy here can explain to me...the subtle differences of sticking you head in the LHC or passing through an area claimed to be a nature's particle accelerator...with a tinfoil as shield not to forget ?

I wonder what's the ratio of maximum LHC's power compared to power generated inside this "natural" particle accelerator. This guy got part of his brain fried for being exposed to just 1% of the LHC's power.

Yes, and let's not forget that the gigantic natural version discovered is '100's,000Km in size too, lets guesstimate 270,000Kms in size, and obtains it's energy from the Sun...soooo...the Russian recieved 1% of the LHC's power, the LHC being just 27Km in size...so we're talking around 10,000 times the size of the LHC, and since the Russian only got a blast from something about 1% of the LHC size, or 270 meters, that means the astronauts would have been exposed, however briefly, to around 1,000,000 (million) times the energy the Russian was zapped with!

And the proton zap, which presumably was a quick affair (he didn't fall asleep in the beam for hours IOW) carved a thin line of dead brain tissue right through his skull..imagine what a Million times that would do to a body or a craft.

Even if the Apollo shot through such an energetic beam, it would have acted like a literal light sabre and sliced whoever or whatever crossed through it. A hot knife through butter.

I would have thought anyway, considering what happened to the Russian.
Unless the belt in space is very much larger than the LHC, but much, much, MUCH lower energy levels operate within..which remains to be seen i suppose.


I'm not sure about the numbers you posted...but that's the general direction I'm going with this.

Now...is this area a true particle accelerator or what ? If it is...is it more powerful than our own LHC ?

If the answer is yes...than...passing through the Belts is looking less and less likely.

I doubt I'm on to something...pretty soon someone will come along and tell me that the energy levels in the Belts is waaaaaay waaaaay lower than one used in LHC.


I think the numbers i gave are probably close if not correct.


Newly released research has identified the existence of a giant cosmic accelerator above the Earth--a natural space "synchrotron accelerator" has scales of hundreds of thousands of kilometers, dwarfing even the largest man-made similar accelerators such as the Large Hadron Collider at CERN, which has a circumference of only 27 kilometres

The article states the natural accelerator has a scale of 'hundreds of thousands' of kilometers, LHC at Cern has a circumference of only 27 kilometers.

I conclude the natural accelerator is approximately 1 million times the size of the one that zapped the Russian physicist which effectively for all intents and purposes bored a very thin hole right through his head.

But yeah...if the energy involved in the much larger natural one are significantly lower that what is used at either the small Russian accelerator or used at the 27km LHC, that will change things...if it uses a higher energy level than either of these two accelerators, then someone will have to explain why the Apollo craft and the astronauts inside were not literally sliced to shreds passing through the thing.

posted on Dec, 17 2013 @ 07:39 AM
link
This is an image of the "universe". This image is hundreds if not thousands of years from being understood.
When you understand this image, you have barely begun to understand the nature if things. 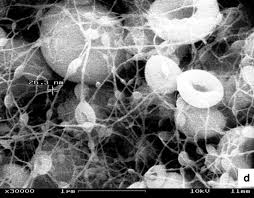 This is an image of the universe as seen with our limited instruments. As you can see we make up a larger 'organism'. 
I have no doubt about the size...but size isn't a what we're interested here...unless the size is in linear connection to power output...

Anyway...I do want to hear how insignificantly small or low energy these VAn Allen belt particles are...compared to the LHC's power output.

We should get some numbers in here...


thanks Brad...totally unrelated to the OP...


thanks Brad...totally unrelated to the OP...


I see what you're saying.

It's a life form Captain, but not as we know it!

It's filaments connecting neurons...it's a Universal mind, alive and conscious.

posted on Dec, 17 2013 @ 08:18 AM
link
This webpage has an explanation. Depending on various things like location and solar flares, there are places above earth where the direction of Earth's magnetic field (every point in space can only have one direction at any time), matches that of the incoming solar wind. In that case, the particles get accelerated.

Those solar flares can't get to the Earth from the Sunward side, so they try and sneak in through the shadow side of the Earth, the magnetotail:

Which results in auroras and other effects.


we are not looking for any kind of reasons...we are actually discussing potential consequences of being exposed to one.

I still fail to see how you tie OP with your post...not that your post is invalid...I just don't see the connection. Maybe you can dumb it down for me...

posted on Dec, 17 2013 @ 08:36 AM
link
You're all acting as if these accelerators are everywhere. They probably just got lucky and missed it during the numerous moonlandings.


I guess you're joking...but let me state none the less...

They claimed they went through the belts...but received only small harmless doses of radiation...well within limits.

Conspiracy theorist argue (based on Van Allen's initial analysis of the belts) that it wouldn't be possible to traverse the belts for humans due to severe radiation.

The discovery is a jumping-off point for understanding space storms and determining how to protect man-made systems—on Earth and in space—from potential damage from space storms and severe space weather.

Let's just hope some idiot doesn't decide it's a brilliant idea to "control" space weather - or modify it or redirect space storms. I'm kinda attached to our earth's magnetosphere.

posted on Dec, 17 2013 @ 08:49 AM
link
Could we not use this to further space travel?
If mapped and understood it seems to me we might be able to take advantage of it and ride it like a chute through a rapids in a river.
With no force of attraction on either side particles are literally "squeezed" through - like squashing a sausage with your hand?

Bill Nye, where are you?

DevilsLettuce
Something I have thought about which may or may not shed light on this discovery was how the Earth recieves an immediate effect from the sun directly after a flare, only to be hit by the flare days later. Like when the x-ray flux goes up after a solar flare fires but it is still days away from the ejecta actually hitting earth, or a glancing blow or whatever.
So maybe this particle accelerator has something to do with that, maybe those increases just in the ambient wind of the sun, what it uses to create its' magnetic field, are being accelerated directly after a flare by the sun, then by this particle accelerator which speeds up those particles which up the x-ray flux.
Does that make any sense or am I just rambling?

Makes me think about cosmic rays too, are they always traveling at the speed of light or when they get inside our magnetic field is the particle accelerator effecting them as well?


The lag between the surge in X-ray flux and the arrival of actual ejecta from a solar flare is caused by the fact that the X-rays are high energy photons, which by definition, travel at the speed of light, and thus make the Sun to Earth trip in about 8 minutes, while the physical ejecta is made up of actual atomic particles, which travel much more slowly.


The Van Allen Belts are not uniform. They don't completely encompass the entire planet at the same depth.

Their shape, and density has been studied since they were discovered and they had been mapped fairly well by the time of the Apollo launches. It wasn't too hard to plot a trajectory that took Apollo through the thinner portions of the belts, where their exposure levels would be lower.


That is wild! Magnetic tubes form when the opposing poles of the Earth and the Sun's magnetic fields find each other - which they apparently do every 8 minutes?
This was confirmed by satellite surveys.
Amazing.

This reminds me of the theory that UFO's (some type of alien craft) use these literal "stargates" to travel between galaxies.