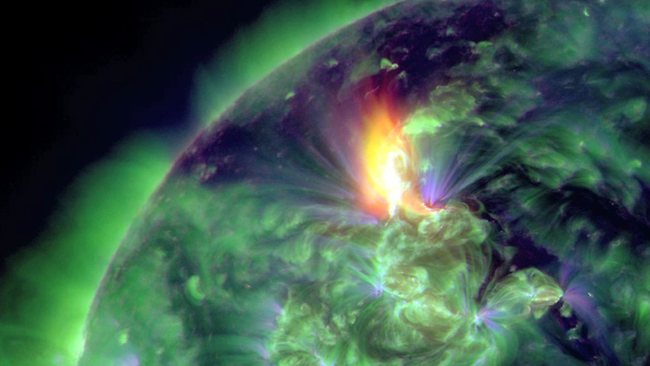 "The puzzle ever since their discovery has been how do the particles get accelerated up to nearly the speed of light?"

Newly released research has identified the existence of a giant cosmic accelerator above the Earth--a natural space "synchrotron accelerator" has scales of hundreds of thousands of kilometers, dwarfing even the largest man-made similar accelerators such as the Large Hadron Collider at CERN, which has a circumference of only 27 kilometres. By analyzing data from NASA's Van Allen probes, University of Alberta physicist Ian Mann, together with his colleagues at NASA and other institutes, have been able to measure and identify the "smoking gun" of a planetary scale process that accelerates particles to speeds close to the speed of light within the Van Allen radiation belt.

Mann says this particle acceleration—deriving energy from solar flares or eruptions and carried through space on a solar wind—exists in the region of space dominated by the Earth's magnetic field, where satellites fly, known as the magnetosphere. The discovery is a jumping-off point for understanding space storms and determining how to protect man-made systems—on Earth and in space—from potential damage from space storms and severe space weather.


Ok, I've read this three times and can't seem to get me pea brain wrapped around this. I'm no physicist nor scientist. Maybe someone here that's a bit more Sci savvy can explain this to those of us with a thirst for knowledge but don't have the letters at the end of our names to fully comprehend the implications of such discovery in plain English.


Yes to put it simply there is a mechanism for opening stargates in the upper atmosphere, powered by our sun.


Lol your comment made me chuckle but sorry I can't shed any light on this the way I understand it after I've read that is there is a massive particle accelerator in the sky
edit on 16-12-2013 by ThePeaceMaker because: Spelling


Your speaking some kind of dialect I don't understand.... But same to you!!!

Can we get someone to break this down in "Layman" terms...

S&F this is pretty spectacular, no?


hmm no laymens terms from me ,but it did spark a thought..

what if you could build a iron ring, supported along the equator ,right around the entire circumference of the earth,
a: could this be used as a power source ?
B: when it was fitted together and the circle was complete , what would happen if you removed all the supports simultaneously?

stilthinkingBox
edit on 16-12-2013 by funbox because: something about wolves , i forget what

posted on Dec, 16 2013 @ 04:33 PM
link
The Van Allen belt somehow accelerates particles and they don't really know how it actually works. That is about all there is to it. It is hard on satellites and craft when they go through it.

That article makes it sound too dramatic. There are articles out there that address this simpler.


hmm no laymens terms from me ,but it did spark a thought..

what if you could build a iron ring, supported along the equator ,right around the entire circumference of the earth,
a: could this be used as a power source ?
B: when it was fitted together and the circle was complete , what would happen if you removed all the supports simultaneously?

stilthinkingBox
edit on 16-12-2013 by funbox because: something about wolves , i forget what

If you removed all of the supports simultaneously, there would be at least one spot where the structure would collapse, and then you would just have a **** ton of structural pieces falling back to Earth (not good; they would be like large meteors at point-blank range)


wow terrifying, but what if they were really careful , and had some inspectors to check the fitting close in.? some other guys to check them inspectors hadn't been lacklustre in there attention to detail , guaranteed structural integrity .. what then ?

posted on Dec, 16 2013 @ 05:14 PM
link
Something I have thought about which may or may not shed light on this discovery was how the Earth recieves an immediate effect from the sun directly after a flare, only to be hit by the flare days later. Like when the x-ray flux goes up after a solar flare fires but it is still days away from the ejecta actually hitting earth, or a glancing blow or whatever.
So maybe this particle accelerator has something to do with that, maybe those increases just in the ambient wind of the sun, what it uses to create its' magnetic field, are being accelerated directly after a flare by the sun, then by this particle accelerator which speeds up those particles which up the x-ray flux.
Does that make any sense or am I just rambling?

Makes me think about cosmic rays too, are they always traveling at the speed of light or when they get inside our magnetic field is the particle accelerator effecting them as well?


So joking aside...what would be effect on the space craft entering this "accelerator"....? Probably no effect eh ?

The existence of the Van Allen belts (the regions containing those high accelerated particles) was quite well known.

Exactly how those particles became so energetic was not. New tools are providing that information.


ever since I started reading this topic...it was always said..."no effect on the Apollo's" from the Van Allen belts.

I'm just wandering...is it normal to go through a "natural" particle accelerator with a craft and feel nothing out of the ordinary...

This will probably sound stupid...could I just walk into the CERN particle accelerator, close the door and engage the machine? what would happen to me if anything ?

it was always said..."no effect on the Apollo's" from the Van Allen belts.


Look again. What was actually said was "no harmful effects". You also need to consider the region of the belts which were traversed and for how long.

is it normal to go through a "natural" particle accelerator with a craft and feel nothing out of the ordinary..

Yes. It was done a number of times.

This will probably sound stupid...could I just walk into the CERN particle accelerator, close the door and engage the machine? what would happen to me if anything ?

That would depend on how long you were in there.

Look again. What was actually said was "no harmful effects". You also need to consider the region of the belts which were traversed and for how long.


Yes I'm aware that duration is of importance...but only concerning radiation levels concerned.

Are there no other effects on the "object" except the radiation ?

Are there no other effects on the "object" except the radiation ?


So this is what I got from the artice. And it gave me a headache. Based on the exchange of energy between the Sun's solar flares and the Earth Elecromagnetic shield...there is a way to harness energy on scales we have not seen before.
The caveat is....how or what to build to harness this energy.


Q: The original question was: Assuming you could avoid any other of the effects of being in an active particle accelerator tube, How much damage would you expect by the particles smashing into you? How much would the amount of mass within the particles effect your chances of living/dying? And if you survived the impact, what kind of havoc would a mini black hole wreak inside you?


A: Physicist: If you took all of the matter that’s being flung around inside an active accelerator, and collected it into a pellet, it would be so small and light you’d never notice it. The danger is the energy.

If you stood in front of the beam you would end up with a very sharp, very thin line of ultra-irradiated dead tissue going through your body. It might possibly drill a hole through you. You may also be the first person in history to get pion (“pie on”) radiation poisoning (which does the same thing as regular radiation poisoning, but with pions!).

When it’s up and running, there’s enough energy in the LHC beam to flash boil a fair chunk of person (around 10-100 pounds, depending on the setting of the accelerator). However, even standing in the beam, most of that energy will pass right through you. The higher the kinetic energy of a particle, the smaller the fraction of its energy tends to be deposited. Instead, high energy particles tend to glance off of other particles. They deposit more overall than a low energy counterpart, but most of their energy is carried away in a (slightly) new direction.


A concerned reader pointed out that there is at least one known particle-beam-accident. A Russian nuclear scientist named Anatoli Bugorski, who at the time was working through his PhD at the U-70 synchrotron (which has approximately 1% of the LHC’s maximum power), was kind enough to accidentally put his head in the path of a proton beam.

He’s doing pretty well these days (considering). The damage took ensthe form of a thin strip of inte radiation damage, that killed all the tissue in a straight line through the left side of his head. Despite the fact that that line passed through a lot of brain, he still managed to finish his PhD.


I wonder what's the ratio of maximum LHC's power compared to power generated inside this "natural" particle accelerator. This guy got part of his brain fried for being exposed to just 1% of the LHC's power.