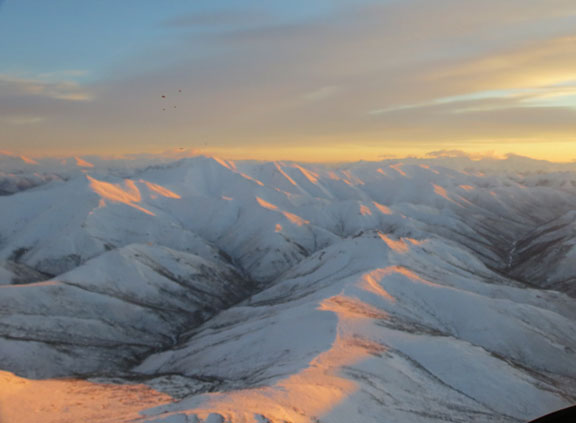 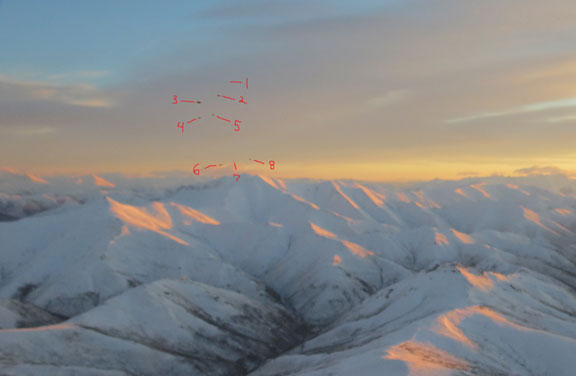 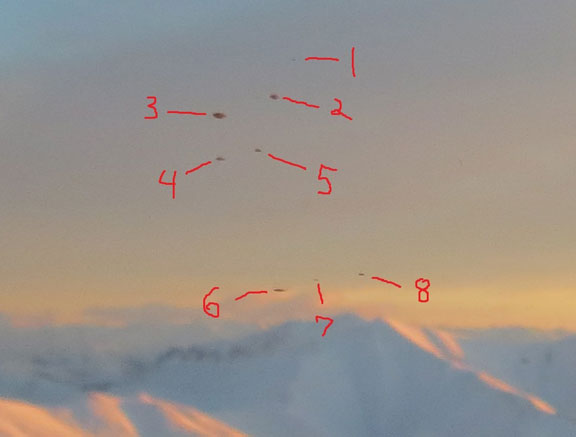 UFO squadron photographed from our helicopter over Brooks Mountain Range Alaska, about 70 miles north of Bettles, Alaska on return flight from the Arctic.

We were flying on a heading of due south and the unidentified craft were on a northerly heading.
Was the only shot I was able to get, they moved behind us at a very high rate of speed.
This was taken in October 2013. You can definitely make out the lenticular shaped craft when I enhanced the photograph, I am a pilot with 33 years experience and this was the first time I've seen a UFO and just happened to be a total of 8 unidentified craft. They do exist! --John Cox

They do exist John they really do...

Maybe he will tell his story about this event on Coast to Coast AM, But as I discovered the answers will always be out there and finally you start to hangout here to search for answers....


The ligh/shadow areas on the UFO does seem to match the light source (here the sun). Thus we can rule out artifacts on the pilot's windshield.

S&F for the mystery find.

They could be looking for Santa, but he lives further south in North Pole, AK.

Wait! There are eight of them!? Santa had eight reindeer! Mystery solved!
edit on 13-12-2013 by MystikMushroom because: (no reason given)

posted on Dec, 13 2013 @ 02:22 PM
link
reply to post by MystikMushroom
or they could be Jesus Christ riding shotgun with Santa.

The relative light and darkness of the objects make them appear to be small and relatively close to the photographer compared to the mountains in the background.

It's blurred, but if this is a real sighting , woohoo is all I can say.


lol, at first i thought i had dust or something on my screen when i looked at the first pic.
Looks like the U.S doing some manoeuvres.


Well until his story could be more verified , I'm not willing to testify for blurds against a 33 year experienced pilot ??

posted on Dec, 13 2013 @ 02:41 PM
link
Strange flight pattern for birds. I'm no expert on flight patterns of our fine feathered friends but don't they fly more in a confined group?

You're the expert I guess , Everybody hold your horses Case solved go home now...

I was being facetious, Skippy. It was a tongue-in-cheek respone as a way to make light of the skeptics who automatically debunk everything UFO related right off. So cool your tool.


I find these stories the most promising because it's been told by a pilot.. many of them kept these stories to themselfs a few years ago for being ridiculed. Now they are finally daring to speak freely , I almost want to thank him and ask him to tell his story or those of other friend pilots that don't dare to speak..

posted on Dec, 13 2013 @ 02:53 PM
link
if those are birds they must be HUGE. i know people will say "waaaaaaaa but theres nothing to compare scale here" hat's quite a distance, if it was a bird i highly doubt it would be visible let alone the size of another aircraft?


Wonder if it is anywhere near the alleged alien inhabited pyramid in Ak.

posted on Dec, 13 2013 @ 03:02 PM
link
Classified aircraft engineered by nonexistent military organizations and funded by the private sector with a healthy dose of tax garnishing for purposes which may or may not bode ill for society as we know it.