A Moderate Take on Free Will

posted on Dec, 12 2013 @ 06:49 PM
link
I always used to think that I had a whole lot more free will than I really did, because I always did have a lot of options and I always did make choices.

But I was wrong - it turns out that chemical and environmental factors really do play a huge role in the scope of my free will.

First, chemical (and possibly neurological) factors. This might be something that a lot of people might find hard to take in at first.

However, drug use - we can focus on pharmaceuticals - has entirely changed my perspective in more than one case, and my perspective is what I use to determine what options I have available to choose from.

To begin with - we can focus on one chemical and neurological factor, the amygdala.

Heightened Level of Amygdala Activity May Cause Social Deficits in Autism

These two articles show how amygdala activity could cause both autism and psychopathy. I am hardly suggesting the two are related, although they do show similar characteristics in a lot of cases such as a lack of a theory of mind / lack of empathy, but an autistic person will try to figure out how other people work in order to fit in while a psychopath will probably immediately understand how someone works in order to get ahead, for starters -

A full comparison and contrast of psychopaths and autistic people based on neurological and chemical factors is not inside the scope of this post, ha. Maybe (probably) another time.

However, while I am at it I will give a shout out to a certain drug that affects the amygdala - Propranolol. 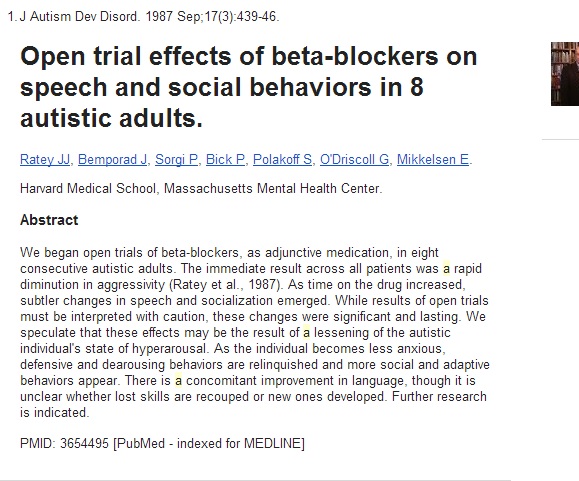 Check out that screen shot from my inbox. One of my friends sent me a link to a scholarly article detailing research that had been done on Propranolol and a possible autism cure, or at least relief of symptoms. This is juice, people, while we are on the subject.

I can tell you that there are more studies being done on this right now on this that are showing drastic improvements in autistic characteristics and well-being. Another time, of course and absolutely.

With that aside, chemical agents have the ability to change our perspective and I know this first hand. A perspective change is a very scary and very real thing. What is being changed, exactly? That is a very good question, one that hardly has been explored.

Estrogen and testosterone are examples of natural chemical agents that occur in our bodies and change our perspectives.

Each of us has a natural chemical and neurological makeup, for starters, and then when you add in drug use as well as diet (pretty much the two most important factors) it can change.

If we are talking about genetics, this would be the place where they could come in, by the way, because they would more than likely be the cause of most of the neurological factors resulting in different natural chemical makeups (unless we are talking about environmental-chemical factors such as any kind of drug use during pregnancy, for example).

I might be able to develop some kind of perspective map in the future and be able to integrate that with neurology and chemical factors in order to make some kind of road map of sorts.

Environment - this has an effect as well. For example, being in an abusive relationship can hurt someone for the rest of their life and teach them how to socialize in such a way that they attract more abusive people into their lives.

So that's the social environment - the "Criminal Mindset" found in prisons (my mom knows this from her experience working in the prison system for a few years) is another example - I'll approach this in a simple fashion, I've been involved with criminals myself in the past.

The basic idea is that there is always a resource shortage, and this results in a calculated trade or favor system. It can be very scary because it limits people - and also has a way of trapping people (I know from experience) into being afraid of asking for help, for example.

The environmental environment - like trees and #. This has an environmental effect similar to that "Criminal Mindset." In a "New World" like the Americas, there were and are still so many resources that it allows for a different, more relaxed take on things than other areas.

This is why we should absolutely be focused on expanding into space, by the way - it is necessary for the survival of the human race.

But wait - that is just limiting the scope. We still have free will to make decisions, and we use that every day. 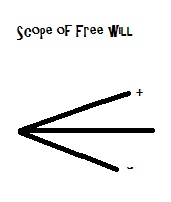 The graph I showed shows a simple version of an example of a scope of free will. In this case, I am going to say that the lower half represents "unhealthy" choices and the upper half "healthy" ones although the scope of what is healthy and unhealthy is way too complicated to represent in this cone sketch I made in Microsoft Paint.

Think about it, here is a simple environmental factor - how much money do you have to spend this month? That affects the scope of your free will, right?

What information do you have about a situation, that's another one, correct?

Although I seriously hope that information remains tied to intelligence and is not tied into money by corrupt businessmen. Ethically, tying information to money available is a terrible idea and a recipe for a caste system. And I'm not talking about limiting information to the rich - but increasing information freely available to the poor, like with the internet, for example, and Wikipedia, for another.
edit on 12pmThu, 12 Dec 2013 19:06:29 -0600kbpmkAmerica/Chicago by darkbake because: (no reason given)

I love Wikipedia because it has been proven accurate through empirical studies, and it can be updated instantly - in our changing times, buying an encyclopedia set for a library and letting it sit for a decade is a terrible idea.

posted on Dec, 12 2013 @ 08:48 PM
link
I think we don't strive for wisdom but only for facts. We are also letting our decision ability be guided by our reason only and suppressing emotions because they can lead us to bad decisions. Good business practice says money has no emotions.

Our emotions are confused and deranged by the programming we receive through the medias, food and medicine. Information changes all the time but truth is always.

Finding truth is not easy when you are only looking with your brain and not with brain and your heart.

Our emotions are confused and deranged by the programming we receive through the medias, food and medicine. Information changes all the time but truth is always.

That part is very true. The media, including advertisements and reality television, can make us confused about reality - take, for example, how women were traditionally portrayed in the media - these days, there is a lot more variety out there, but unrealistic expectations can happen.

A bad diet can lead to cloudy thinking, and even something like tap water can have estrogen in it from birth control pills.

Medicines from pharmaceutical companies can entirely change a person's perspective, and as more people get on medicine, it might become more and more necessary to get on some to keep up - at least that is how it was in the past.

I think we reached a change in how things happen this year. I'm not sure how much longer people are going to be trying to be perfect.
edit on 14amSat, 14 Dec 2013 07:11:07 -0600kbamkAmerica/Chicago by darkbake because: (no reason given)