In a few years, when the arctic is ice free in the summer?

Look at the data behind the graph. Thnx.


In 10 years, when things are much like they are now, remember your chart. Unless we have all melted by then.


I think that part of the problem is that when the discussion on what we were doing with the climate began, the estimated projection was actually fairly shortsighted. I was in college as a science major and the two core ideas as to what was going to happen were that the ice caps would warm and that sea levels would rise, affecting overall global temperature to be warming. Our knowledge of the earth and weather systems is not perfect so there is always a chance for the possibility of err and not seeing all the potential effects.

The planet is, in fact, warming. A solitary snowstorm doesn't equate to the average global temperature staying stagnant or cooling. Overall though, what we are really experiencing on a day to day basis around the world is climate change. That is what we do know is occurring as the weather patterns have been shifting in response to the warmer temperatures up North. This is the source, I believe, of all the strange and chaotic weather behavior that we've been seeing here and in Europe. Droughts in areas where rainfall has lessened because it's falling in areas less used to higher amounts (floods). Snow in Phoenix. Hurricane Sandy. All part of climate change and most likely related to that weakened jet stream.

If you imagine the jet stream as a block and conveyor belt of weather, then what would happen if that belt loosened? Climate change and to me that's a far better word to explain what we're currently undergoing although it is very likely to be due to the same thing--warming arctic.


Me personally i vote we put more co2 in the atmosphere and put off the natural cycle shown the vostck ice cores. Next judging on past temperatures will dip back in to another ice age and god that would suck.Its amazing when you look at the ice core just how regular the graph is here have a look. 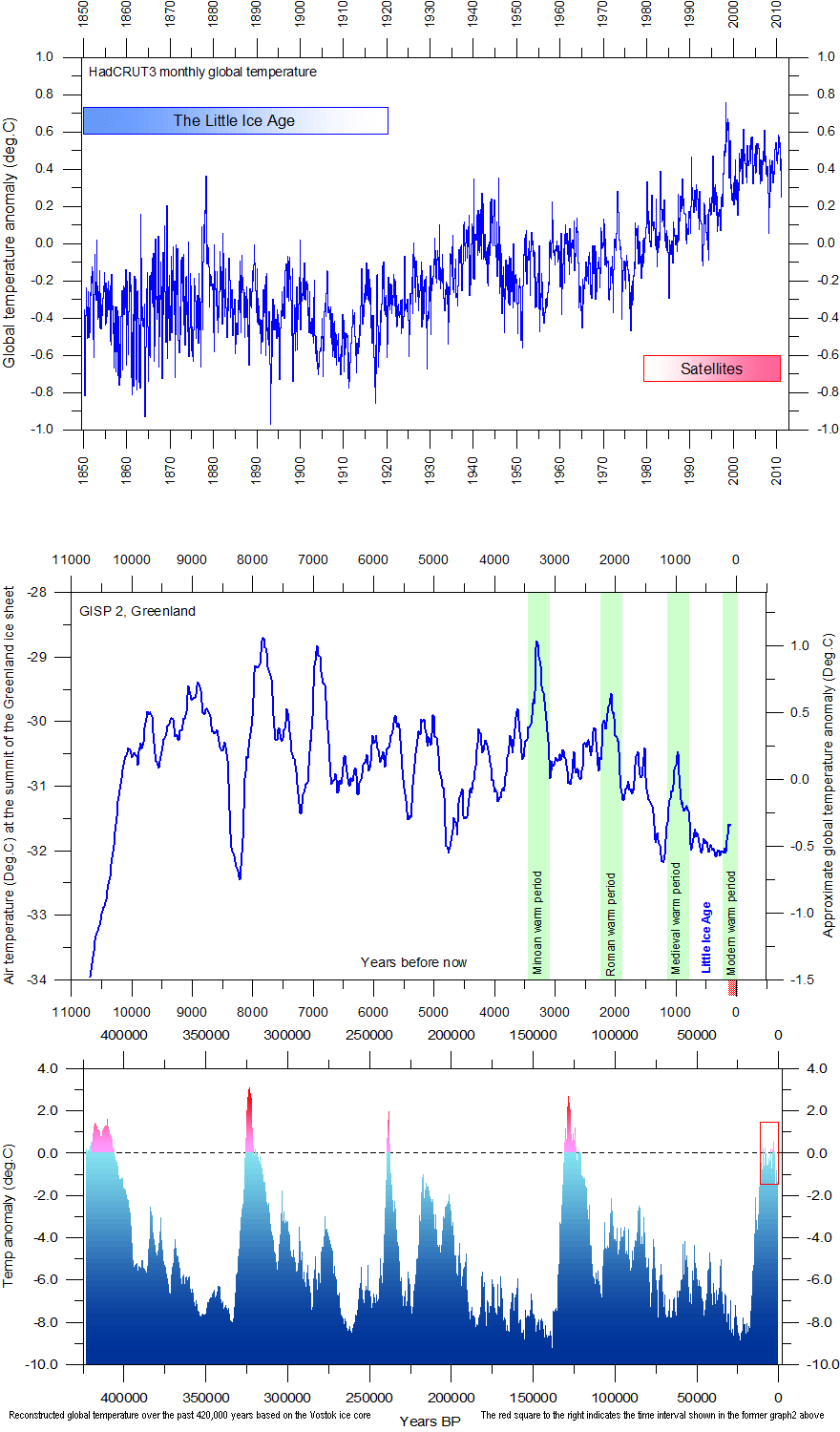 
The planet is, in fact, warming. A solitary snowstorm doesn't equate to the average global temperature staying stagnant or cooling. Overall though, what we are really experiencing on a day to day basis around the world is climate change.

The climate is changing. Yes. That, I don't dispute and never have for that matter. It's in a constant state of change, but that's not what I mean and truth be told, I was talking to friends about the changes in weather in the late 1990's. That was before it was quite the fad, but before the profit system had been invented for it too.

The climate has been getting more extreme in both directions, and THAT, not a trend either way, is what I think the evidence is showing. We are seeing extreme cold AND extreme warmth, depending on where. People say global warming necessarily will cause cooling .. Okay.. and by that logic, that can be flipped to say global COOLING may cause warming in some areas. The logic for one in technical terms, does flow in reverse. The balance is a crap shoot for guess work with computer models proving "Garbage In-Garbage Out" is still alive, well and in practice daily.

It's by no means one storm. A week or two ago I shared the 1,000 cold temp records being broken at once across the US. In the last few days, Egypt reports a snow event not seen in 100 years. Saudi Arabia partied in rare snow and the scene in Jerusalem was one i first mistook for a US Interstate somewhere in snow country during a nasty one. This is JUST this year. Last year has similar events, and scientific pieces indicate the "warming has stalled" over recent years.

Errr... Yeah.. or warming was never a sustained trend in the first place.....

I think there is enough happening to both sides of center on the temp scale and in odd ways, we need to keep an OPEN and not pre-determined set of ideas for how everything is being interpreted. The computers have consistently been flat wrong, because the data IN has been guesstimates and SWAGs.

Well... Nature makes man look like an ant for impact...and nature is 'having a movement', it seems. Slow motion..but then, we know by historic record, these things always are. We need to be real sure which direction it's doing, IMO.


Really? Ok I trump this article. I am tired of the scare tactics on the dis-informed and ignorant.

TheWrightWing
CO2 a pollutant? Are you out of your mind?

I think most people have clued on to that.

That is why there is the need for a new bogeyman, with a long, hard-to-understand name.

your image looks all scary and imposing...until one steps back and looks at the bigger picture. looks like we're right on schedule.


Don't you know, if your source shows anything other than extreme warming and death, it's right wing propaganda.


Exactly. I think you and I are closer to seeing things the same way than you may think. Although global average temps have risen, global warming is just a bad term all around because it does not really describe what is actually occurring due to those wonky and wimpy jet streams. Cold systems from the north can reach further south, warmer weather can go further north. Climate change, as a term, is far better in explaining what we're confronting and a whole lot more tangible and less dissonance stirring than this idea that the world is going to turn into a tropics everywhere. I really hate the term "global warming" for those reasons.

I think that part of the reason why we are having such a hard time with modeling the effects of what is going on is because we really aren't as knowledgeable as we tend to think we are. There are so many factors that contribute to making a climate in a specific area from terrain, man-made elements, proximity to a body of water (even the type of water body matters), latitude, longitude, flora, and more. If you can have an increase in humidity from 85 to 98 the moment you step into a forest (I've actually measured this change personally, btw), then you can see the effects of climate in an area for one of those elements. Trying to put that up against the world to ascertain the effects globally--that's pretty crazy. I remember when I was majoring in biology and taking ecology courses years ago. The favorite thing taught was the GAIA hypothesis and the example was that a butterfly flapping its wings can create a monsoon in India due to a little stir in the air.

With the fact that the northernmost jet streams are behaving so loosely, it makes our weather far more dynamic than it was before. That further compounds the issues of trying to model the effects. So you'll have increased warmth and rainfall in deserts, making them greener but you'll also get the occasional severe temperature drop from a strong system in the north. How does one model that reliably?

For the record, I do not think that our actions are entirely to blame. That would be disingenuous and big problems never, ever have simple answers. The causes are complex. My stabs in the dark on it are man-made effects (forest loss, cattle, cars, factories, cities and more), natural cycles (world temp has always been cyclical according to geological history), decaying and moving magnetic poles, ice loss resulting in acidification of the oceans, and more. Complex problems have complex answers. That's just the way it works. The problem just seems to be people wanting to point a finger at just one of those things and sticking by it doggedly.