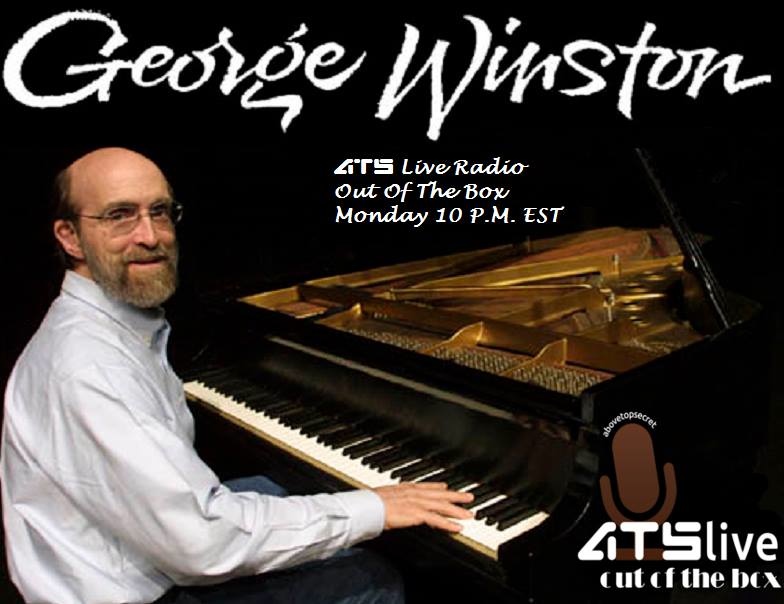 www.georgewinston.com...
Also – check out his bio on this thread: Link

On Monday, December 9, 2013, I had the pleasure of interviewing multi-platinum selling, Grammy Award-winning American musician, George Winston, for the “Out of the Box” ATS Live Radio show. The interview was given to us from a phone while he was literally on the road, traveling through Wisconsin on his way to another performance.

He was wonderfully open, candid, down to earth and generous with his time.

Here is a famous song you may recognize from his album, “Linus and Lucy, The Music of Vince Guaraldi.”
(More music below!)


DETAILS OF THE INTERVIEW…

“Perhaps best known for the ringing, rural folk-piano sound of his earliest recordings (“December”, “Autumn”), pianist George Winston has spent the last decade and a half deeply schooling himself in the music of artists who inspire him, including Vince Guaraldi, the Doors and the great rhythm-and-blues players of New Orleans.”
– Tom Keogh, The Seattle Times

We will have the honor of the International Debut of his new digital single, Slient Night, on Out of the Box, this coming Monday, December 16, 2012 (5PM UK, 10PM EST). 100% of the proceeds from this single will go to the organization, Feeding America. Feeding America is an organization that supports a wide network of food banks across our country. Feeding America

He is about as authentic as you can get – humble, focused on his music with an amazing intensity and the thorough knowledge of a master. In addition, he is someone who is consistently serving the world around him, donating his talents and entire album projects to charitable organizations.

George goes into detail about some of the unique techniques he uses on piano, guitar and harmonica, which was fascinating. I learned a great deal in the hour we spent discussing his music, his career and his upcoming projects!

He talks about the process of composing, what inspires him, what its like to be on the road so much and how that effects him, what motivates him to do all the benefits and charity work he does – I was inspired and enlightened by his answers.


“The popular, unassuming pianist’s songs are pastoral wonders that purposefully evoke nature and landscapes in a way that’s as understated as it is beautiful.”
– Ben Salmon, Bend Bulletin

This is a song titled, “Lights in the Sky” from his Grammy Award Winning album, “Forest:”

He also has an album titled “Night Divides the Day – The Music of The Doors,” featuring famous tunes from that legendary group done in his unique style.
Here is “Spanish Caravan:”


In addition to this new single, Silent Night, George Winston has created the following benefit albums, 100% of the proceeds from these albums went to the causes they supported. (There are others he mentions in the interview, too, that I had no idea about…)

I deeply respect and was inspired by his commitment to grass-roots work, and to the notion that we don’t need to wait around for Government or someone else to help, WE can reach out and help each other on our own, as a natural extension of who we are…

I hope you will tune in and join us for this exciting “Out of the Box” Interview George Winston.

“His concerts are always a blend of performance and philanthropy, with a canned food drive held at every show to benefit a local food bank, and portions of his merchandise sales donated to those organizations as well.” – Naila Francis, The Intelligence

Thank you to all those involved in the production for your hard work and dedication .

Member driven content is the core of ATS, and something like this is literally, exactly what this community is about.


You will hear some of December on the following Christmas episode (Episode 8) - we get to use his music (with his permission, of course) for any of our Out of the Box episodes!

It was an amazing experience to do the interview - I was completely fascinated the whole time, despite the noise from the cell phone connection... (It will be great - Druid is doing some editing magic to bring up the sound quality!)

Everyone involved worked very hard to make this happen. I'm honored I got to be part of it!

posted on Dec, 10 2013 @ 11:10 PM
link
Though I was there for the interview I didnt say anything, as I was in AWE of this man, and how he describes his music, its always wonderful to hear how music moves people, and the fact that he is so generous only ADDS to the person that he is.

A personal thanks to Wrabbit (for taking time out of his real life for this interview, and his questions were awesome), Destinyone (for being awesome and bringing this fantastic musician to OOtB), and of course AboveBoard ( As this one is to keep and remember always, her professionalism is outstanding) for how wonderfully she conducted this interview.

You Out Of the Box crew don't mess around!


George is very generous GUT. He gave us permission to use any of his music on any OOtB shows. We are so happy and will be Playing a lot of select pieces of his.

posted on Dec, 11 2013 @ 06:47 AM
link
I am so excited about this upcoming show! George Winston has been a prominent musician in my music library for years. Back in the late 80's someone gave me a Windham Hill sampler that had some of his music on it. From the minute I heard his music it was an instant connection for me and I've been a fan ever since. His music is my 'go to' when I need a break from the nonsense of the world. In fact, I have a "George Winston" station on Pandora and have been listening to it for the past week while working up a thread to post on ATS. LOL

Thanks to the Out of the Box crew for some stellar shows (especially NRE for pointing this wayward member to the Rewind page so I can listen to the show since my schedule does not allow me to listen as it is first presented on Monday evenings).

posted on Dec, 11 2013 @ 06:49 AM
link
Looking forward to tuning in and enjoying the show guys! Not fair I have to wait until Monday though.

posted on Dec, 11 2013 @ 09:21 AM
link
Nice job OOTB crew! I am humbled to be a part of such a solid group of professionals. I'm looking forward to the interview as well. Huge get for the radio show!

posted on Dec, 11 2013 @ 12:47 PM
link
This sounds like a fantastic show! My husband is a huge fan of George's music and he introduced me to it and I quickly became a fan, as well. I'm so excited for you guys that you got to interview him and get insight into his creative process and what motivates him.

I saw up thread a few posts that someone mentioned that they could listen to the show later if they were not able to catch the initial broadcast. I was wondering if you could post that location in the thread? I already know that I won't be able to listen to this when it is broadcast due to an eye Dr. appointment and then likely dinner out with the in-laws. I want to hear this show with George Winston so badly, though.

Thanks so much for letting us know about this interview!
Take care,
Cindi

The show airs next Monday, but you will be able to catch it a few days later on the "Rewind Player." The link to that is on the home page of the ATS Live Radio (at the top on the far right). So just use the link in this post and go to the Rewind player. Choose "Out of the Box" (S1E7) - that stands for Season 1, Episode 7.

posted on Dec, 11 2013 @ 01:38 PM
link
Great! Thank you so much for the link and instructions on how to find the show on Rewind. I was so disappointed that I was going to be missing this particular episode and this really does make it all better!


I'd like to invite ATS members to join us in chat for a great time during the show too! This new version of ATS chat is much more user friendly than the previous one. We have a lot of fun there...


It's been a long time since listening to "December", this will be a decades overdue catch up.