The asteroid that exploded on 15 February this year near the city of Chelyabinsk in the Urals region of Russia was the largest to crash to Earth since 1908, when an object hit Tunguska in Siberia. Using video recordings of the event, scientists have now reconstructed the asteroid's properties and its trajectory through Earth’s atmosphere. The risk of similar objects hitting our planet may be ten times larger than previously thought, they now warn.


Of the millions of estimated near-Earth asteroids 10–20 metres in diameter, only about 500 have been catalogued. Models suggest that an object the size of the Chelyabinsk asteroid hits Earth once every 150 years on average, Brown says. But the number of observed impacts exceeding 1 kiloton of TNT over the past 20 years alone hints at an actual impact risk that may be an order of magnitude larger than previously assumed.


So risk of asteroid impacts may be more common than expected. Rather than expecting an impact every 150 years, researchers believe the risks could be ten times greater.

posted on Dec, 7 2013 @ 07:47 PM
link
So for starters, how come we haven't had that many hits in the last few centuries?Luck of the draw?
And can we expect the arrivals to be mre frequent in future?


I believe we had many hits in the past that were not reported and may have many more in a near future as I believe last years/decades were far from the average number.
edit on 7-12-2013 by CosmicDude because: (no reason given) 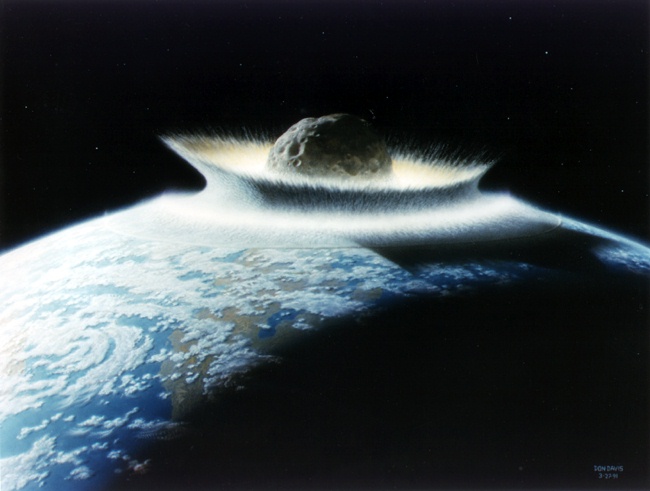 Well, I guess you've never heard of Ben Affleck and Bruce Willis, because they know how to save the world, they've actually already done it once... "I don't want to close my eyes..."

posted on Dec, 7 2013 @ 09:27 PM
link
its coming and just a matter of time when?this last year alone i,ve read about more meteors lighting up the sky than ever before.

posted on Dec, 7 2013 @ 10:49 PM
link
you cant underestimate something that was never estimated properly.

Ah! I think your right.
I have a cold and my eyes and nose are streaming so not paying enough attention. Dont worry, I sterilized this post

posted on Dec, 7 2013 @ 11:44 PM
link
I have had that thought, as in maybe we are in a lull for the regular crap from the sky that has destroyed other civilizations in the past....not Nibiru exactly, but some regular heavenly happening that goes on from eon to eon....without warning of course......
THOUGH SUCH SWARMS WOULD SEEM TO BE FAR MORE DETECTABLE THAN THE FEW CHUNKS WEVE ALREADY IDENTIFIED......
They may still be very far off the beaten path to find....some elliptical
orbitting chunks maybe....

posted on Dec, 8 2013 @ 12:43 AM
link
Snore....
Just wake me if it hits.
This habit of freaking out everytime a rock passes through the solar system is getting pretty lame.


Considering the modern population of Earth, of course casualties will be higher than the past, and destruction of our creations in general, due to cosmic bodies impacting the surface or exploding en route. It's just probability.
edit on 8-12-2013 by 1Providence1 because: (no reason given)

posted on Dec, 8 2013 @ 02:59 AM
link
If the Chelyabinsk meteor fell over the Pacific Ocean or Sahara desert, there would probably be less shouting and waving of hands in panic. In fact, we'd probably not know about it at all, if there were no one to see it. The Earth is big, 70% of it is oceans, and some of the dry land is very sparsely populated. So while statistically these things happen fairly often, it doesn't mean big cities will be hit every time.

Check out the case of 2008 TC3: en.wikipedia.org... It was much smaller than the Chelyabinsk meteor, but was actually discovered 20 hours before impact, and was tracked to its impact site. It exploded tens of kilometers above the ground with the energy of 0.9 to 2.1 kilotons of TNT over a remote area of the Nubian Desert.

Asteroids with a diameter of 4 meters (like the 2008 TC3) impact Earth approximately once per year. Asteroids with a diameter of 7 meters enter Earth's atmosphere with as much kinetic energy as Little Boy (the atomic bomb dropped on Hiroshima, approximately 16 kilotons of TNT) about every 5 years, but these ordinarily explode in the upper atmosphere, and most or all of the solids are vaporized. en.wikipedia.org...

posted on Dec, 8 2013 @ 10:25 AM
link
Why is there so much ridicule of posters attempting to discuss the clear and present danger of near-earth space objects impacting our planet? What about an asteroid taking out satellites or creating an emp over a highly populated area? I think we need to be aware of these potential risks.

Star and flag your way, CosmicDude !


But according to the video the danger from a meteor strike has been overestimated so things are not all bad.