posted on Dec, 7 2013 @ 02:46 PM
link
I want to share an amazing historical find with my friends at ATS. I have an old Apothecary Chest that I thought was an old Mexican Spice Rack until a friend visited from Madrid Spain. He said that the language was written in a dead language and that the coat of arms on the front was from Spain, and that he had seen it but couldn't remember where. So I started searching the information, and I unraveled an amazing history.

The front of the chest says: Siento Adminiftor EISr Dn Geronimo Rubio.
Which means "Being the administrator Excellent Illustrious Senior Don Geronimo Rubio" The EISr Dn are nobility titles given to Doctors and other Nobels. Notice the s in Adminiftor? 200 years ago the lower case s was written as an f.

First I discovered historical Information about Dr Rubio, but everything I found was from the 1600's. I just couldn't believe it could be that old, but then I found some look-alike chests on line.

My chest with drawers open 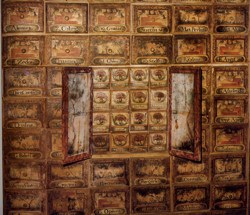 Look alike chest in the Spanish Museum in Toledo Spain 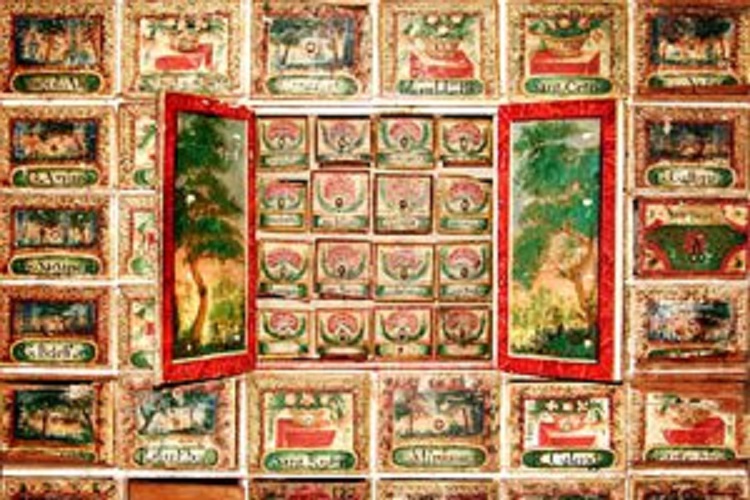 Look alike chest in the Museum of the Royal Houses in Santo Domingo. This is the Christopher Columbus museum.

I researched the coat of arms, and knew it didn't belong to the Rubio clan. So, this stumped me for a very long time. Until I realized the chest in the Spanish Museum also had the same coat of arms on the front. (thanks to a tourist blog) What I found was that Cardinal Tavera in 1554 built the San Juan Bautista Hospital in Toledo Spain. Tavera was from the Noble Malagon Family. To honor him the Hospital adopted his Malagon Coat of Arms, as their own. At this time in history, Spain was in the process of building cities in the new world. Each new city required a hospital, a doctor, and a pharmacy. Doctors studied at the university of Alcala and then trained at the San Juan Bautista Hospital in Toledo. Many doctors were sent on their “mission” to the new world.


The inquisition was in full swing and the alternative healers were stomped out of business. The front of the chest loudly proclaims that Rubio had the Authority of Cardinal Tavera's Medical Hospital. The University of Alcala was one of 2 Medical Universities in Spain. I actually found the documents to prove he studied at the University of Alcala in the early 1600′s, and that he lived in Epila Spain. He was at the university the same time Cervantes was studying at Alcala.

I find it very interesting that Don Juan of Austria (king of Spain’s bastard son) also lived in Epila about 30 years before my Geronimo was born. Before the king changed his bastard child's name to Don Juan, he was known as Jeronimo Rubio. (really Im serious) The J and the G are interchangeable. I don’t think this chest was Don Juan’s, however, I think my Geronimo was named after him!

In the 1600′s the San Juan Bautista Hospital in Toledo Spain, was presented with a Pharmacy Cabinet. The front bears the Coat of Arms of the Founder Cardinal Tavera. Compare the coat of arms below to the one on my chest. My chest is very dirty (I wont be trying to clean it either) so it is hard to see, but the blue side also has the same dove and of course the red and gold bars. (I wont go into what all the symbols mean)
The coat of arms on my chest has red tassels on the sides this means he was a prelate to the Catholic Church. Or commissioned by the church.

If anyone is interested, I made a blog with more of the history and pictures at www.weirdexperiances.wordpress.com
You can find links to documents as well.

When King Ferdinand and Queen Isabella were, expelling the Jews from Spain, the doctors were given the chance to change their faith to Catholic if they wanted to stay in Spain. It is also interesting that Rubio means Blond. From a Jewish stand point, it means, from the Isrealite tribe of Ruben. So, it is possible, that Geronimo was Jewish and was forced to become a Catholic. I found a historical document of the names of those expelled, Rubio's name is on page 9 and if you want to go to my blog you can find it under the documents page.

I sent pictures to the Museum in Spain, and this is their reply:


My name is Susana, I am one of Juan Larios’ workmates and I can speak English.
Indeed your piece of furniture is very similar to ours. We would like to know more about its origin, where did you buy it and when, for instance. Also how did you find us? This piece of furniture is a Spanish work for sure and if you are interested in selling it you should ask in an auction house. Depending on its price we could be interested in buying it.

Second email:
Thank you for the information on your chest. If we can find out more details on Jeronimo Rubio we will let you know.
I beg you to keep us informed if finally you decide to sell it.
Yours sincerely,

Anyway, Im pretty excited, and wanted to share the history with you. The Foundation for the House of Ducal Medinacel is a very important Museum in Spain and houses really important works of art.

posted on Dec, 7 2013 @ 03:07 PM
link
Intresting read and glad you linked your page where i could take a better look of those drawers. I believe there is not many of these left and that´s why museum is drooling over it.. Don´t sell it

Manna not sure what it is means in spanish or if its universal but in our bible it ment the food which came from heaven which kept Moses and his followers alive in desert.


You lost me a bit with the:

He was at the university the same time Don Quiote was studying at Alcala.

"Rubio" also does not link directly to blood, first it links to the hair color or simply the color red (reddish) in general and not particularly to blood ("Sangre").
edit on 7-12-2013 by Panic2k11 because: (no reason given)


That is what we have been told.. also that it was a horse´s name. We don´t know for sure but we assume the charachter was fictional. Maybe it was a squib originally


Well it is a good conversational peace and if you get some documentation certified (use a Spanish notary) you may add value to it...

posted on Dec, 7 2013 @ 03:40 PM
link
Your right Cervantes! My nephew dropped by as I was finishing the post and I didn't get to proof like I should have. Sorry thanks for the correction.

To the name references:

Thank you, I appreciate knowing what area's of the blog, need work. I will research and put more together about the Rubio lineage. I have found birth certs, christening records for Geronimo Rubio around the Segovia from the 1500's on.

I wouldn't have a clue how to get things documented to certify it, someday maybe. But, I learned so much on my quest to figure out who in history it belonged to, and what was going on at the time. Yes, it is a great conversation piece, because, every symbol on the drawers and doors has a meaning.

Anyway, I had fun researching it, I learned a lot about Spanish History, Heraldry, Language, culture and even Art.
When I bought it at a junk shop, I just knew I had to understand it. I enjoy history, so I loved the research.
Im trying not to be attached to the outcome, it could prove to be a fake. It looks real to me.